The castle marked "monte rappoli" that Leonardo depicted on map RLW 12278, at the Elsa, between Empoli and Granaiolo, corresponds to the current Monterappoli, a small hamlet of the municipality of Empoli. Leonardo represented the small town of the Valdarno in the form it took on during the Late Middle Ages, namely, that of a small fortified village, defended with walls and towers, and maintained as such at least until the beginning of the 16th century. During the medieval period, Monterappoli was one of the Valdarno castles of the powerful Guidi family.

Origins: munte rappuli and the castle of the Counts Guidi

The first attestation of Monterappoli dates back to the end of the 10th century, when it is mentioned as one of the places where were the lands were situated that the Marchese Ugo donated to the royal abbey of Marturi, together with a series of other properties distributed all throughout the Valdelsa. It is very likely that the lands of Monterappoli, as well as those of the curtis of Lucardo, originally belonged to the royal tax authorities. The locality was mentioned again in 1075 in relation to a female personage, Teberga, daughter of Teuderico da munte rappuli, widow of one of the exponents of the family group of the Ghisolfi, who at that time owned several castles between the Val di Pesa and the Val d'Elsa, including Montespertoli. In the act in question, Teberga transferred some of the goods that she had received from her late husband to another family group, that of the lords of Callebona. The personages that gravitated around the legacy of Teberga belonged to two family groups that shared the exercise of stately rights on the same places and a special bond with the noble family of the Cadolingi—at least until the family died out, at the beginning of the 12th century—and with the monastery of Passignano. Nonetheless, Mons Rappuli cum sua curte appears, in the 1164 diploma of Frederick I, among the castles conceded by the emperor to the Counts Guidi, together with the nearby castles of Empoli, Granaiolo, Torre Benni, Colle di Pietra, and other villages of the Valdarno.

The parish church of Monterappoli and the Via Francigena

Significantly, the date that can be read on the architrave of the parish church of San Giovanni Evangelista, located a short distance from the castle, is the following year, 1165. The inscription, signed by magister Bonseri, refers to the year of the construction of the church, which is commonly attributed to the Lombard artisan. It is one of the most significant parish buildings in the Valdelsan Romanesque style. The building consists of a single large hall with an apse, made entirely of bricks. The facade, marked by pilasters, has a single decorative element in the crowning, made up of intertwined arches, again, fashioned of bricks. The portal, with a round arch on columns modeled in bricks, is surmounted by a two-light window highlighted in a protruding portion of the facade, corresponding to the width of the portal. The opening seems to be wedged inside the front by playing on the graduated levels of the rich series of frames and arches that frame the lights of the two-day window. The most characteristic elements of this structure, the most ancient of its kind, can be found in other buildings in the Val d'Elsa, including the collegiate of Saints Lorenzo and Leonardo, the parish church of Saints Ippolito and Biagio in Castelfiorentino, and the rectory of Saints Iacopo and Filippo a Certaldo. The parish church of Monterappoli certainly owes its monumentality to its proximity to one of the alternative routes of the Via Francigena, on the left side of the Elsa.

Monterappoli between the 13th and 14th centuries

On 12 August 1254 the castle of Monterappoli was sold to Florence by its former owners (respective shares by the several owners), Guido Novello di Modigliana, Guido Guerra, Ruggero di Dovadola, and Guido di Romena of the Counts Guidi. The sale involved several castles of that sector of the Lower Valdarno belonging to the same noble family lineage: Empoli, Cerreto Guidi, Vinci, and Collegonzi. Toward the end of the century the castle of Monterappoli was particularly involved in the events relating to the rapid constitution of the Florentine contado. In fact, it was located in the border zone between the area on which were concentrated the expansionist aims of the powerful City of the Lily and the territory claimed by San Miniato. During the 13th century, the imperial castle had succeeded in creating a vast comitatus that reached, on the northeast border, the zone of the confluence of the Elsa with the Arno. In 1297 Florence manifest its intention intended to redefine this boundary line, which substantially coincided with the Elsa River. The Florentine requirement, in the form of the letter sent to all communities concerned, listed the rural communes that specifically were obliged to deal with defending the border on the Elsa. Among these, together with the municipality of Monterappoli, were the communities of Empoli, Borgo Santa Fiora, Granaiolo, Castelfiorentino, Catignano, Gambassi, Montignoso, and Certaldo. At the beginning of the 14th century, in 1311, Emperor Henry VII, stationed in Pisa, confirmed Monterappoli as being among the castles claimed by the Empire. In those years, the area of ​​the confluence of the Elsa into the Arno had become the outpost of the city of Florence along the southwest limit of its border line. Only two years later, however, Monterappoli was included among the strongholds subject to special attention by the city of Florence. In 1313, the men of Monterappoli were exonerated by Florentine authorities from their payment of the contribution for the expenses toward the fortification of Empoli, because they had already been burdened by their obligation to maintenance and defensive preparation of their castle. At the end of the 14th century the small town of the Valdarno came definitively into the orbit of Florence, and was politically organized as a rural community. In 1393 it was endowed with a statutory text, drawn up for the community by ser Albizzo Fantoni of Pistoia.

The first document that provides information about the material constitution of the castle of Monterappoli is the 1254 deed of sale by which the Counts Guidi ceded to Florence castellaris Monterappoli sicut girant ripe et fovee. Judging from the text, which uses the term castellare, generally used to refer to a fortification no longer in use, the defenses of Monterappoli must not have appeared in good condition in the middle of the 13th century. The same text also shows, however, that the castle was once equipped with a defense system composed of, in addition to walls, banks and a moat before the wall, structures that still defined—probably along with what remained of the wall—the perimeter of the fortified center. The 1254 deed of sale of the castle also shows the first mention of the castle church dedicated to San Lorenzo, which is now visible, albeit in late forms, in the hamlet of Monterappoli (municipality of Empoli). At the beginning of the 14th century, however, the castle must already have recovered its defensive function. In fact, it turns out that it was the object of special attention by the subjects that gravitated around the border line of the Elsa, especially the city of Florence. In 1313 the inhabitants of Monterappoli obtained exemption from a tax obligation, owing to the high expenses they had incurred for the development of the defenses of their own castle. Documentation from the 14th-15th centuries produced by the dominant city enlightens us on the material constitution of the castle of Monterappoli in the Late Middle Ages. In 1368 the Ufficiali delle Castella ordered the expansion of the castle, then considered too small to accommodate the population that lived in the villas of the surrounding area. The 1393 statutes of Monterappoli confirm the fact that the restoration works for the castle defenses were still underway at that time. It was prescribed that the duties owed by foreigners were to be destined entirely for expenses for the castle walls, towers, and brattices (bretèches: small balconies with machicolations). The same defense works were the subject of special regulations aimed at their preservation. From the statutes we learn that many of the houses were built near the wall. Those who owned houses next to the castle wall were responsible for the maintenance of the wall itself and for the efficiency of the defense. Specifically, the construction of a masonry channel was ordered, to drain rainwater to the exterior of the castle wall in order to avoid its rapid deterioration due to rains. Inside the castle, in addition to the church, there was also a building known as the "house of the municipality" (town hall), equipped with loggia, located in a public space inside the castle and intended for housing the municipality's officials. A century later, the castle seems still to have been equipped with defensive structures, but decidedly more articulated. From the 1427 land registry declarations, the inhabited area appeared to have divided into an older nucleus, the Chastelvecchio, and a more recent part, the Castelnuovo. The former included most of the residents' homes, in many cases adhering to the castle walls, some in good condition, others apparently crumbling (claiming, for example, "the house is propped up by supports"). The inhabited area had its own internal road system: mentioned, in fact, was a significant Via delle Liti. In Castelvecchio stood also one of the most complex buildings of the entire town (a worker's house and a house for the lord, with a cell and other buildings, with harvesting barrels) that bordered the town hall. If we can hypothesize, for these building complexes, a construction technique made of stone, we do know that in other cases, the castle houses might be constructed of raw earth (casa di terra). The other sector of the inhabited area, the so-called Castelnuovo, would appear to coincide with an area of civic expansion called borgo di San Piero. Documentation indicates that there were some dwellings that bordered with the "old ditch" (the castle moat). There was also the casa dello spedaliere, the house of the rector of a reception structure located outside the town, in the locality of Romitorio. This is roughly the aspect under which Leonardo depicted Monterappoli on his map RLW12278. The Valdelsan village is represented as a castle still equipped with a defensive circuit, equipped with towers. At the beginning of the 16th century, therefore, the castle of Monterappoli still had the material constitution and appearance that it had assumed during the Late Middle Ages, although the first signs of transformation of the defensive system were already underway. In 1507, in fact, a request had been made for the purchase of part of the moat and the banks, evidently no longer in use. Again, in 1511, a Florentine citizen, a certain Pier Maria Portinari, who had purchased one of the towers of the castle wall, asked permission to be able to lower it by a few meters. In this case, as well, we bear witness to the progressive diminishment of functionality of the castle defenses. Today, in fact, there is no trace of the castle of Monterappoli as Leonardo saw it, with the exception of some ruins we can see near the church of San Lorenzo, and the nearby street by the name Via del Castello.
Texts by
Silvia Leporatti / English translation by John Venerella
Related resources
Related places
Gallery 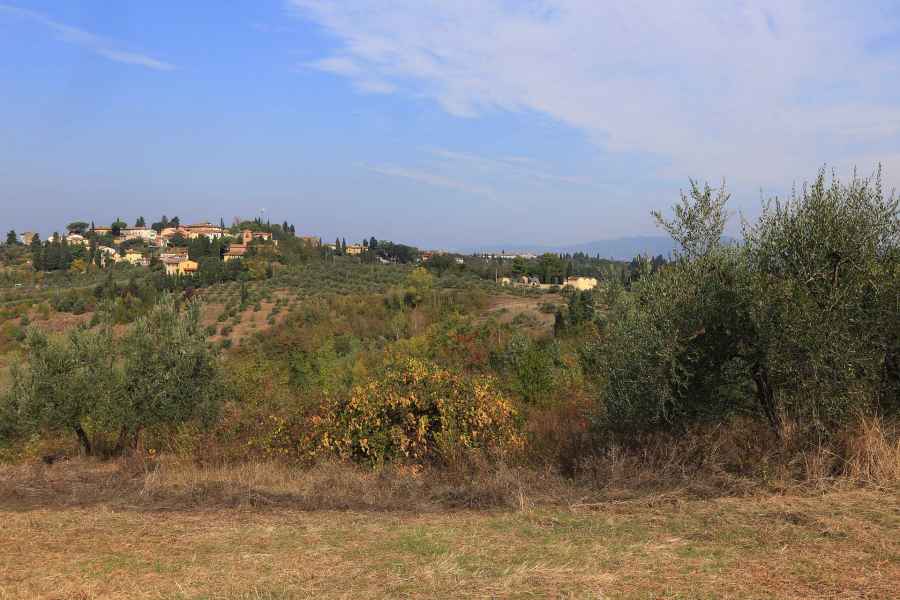 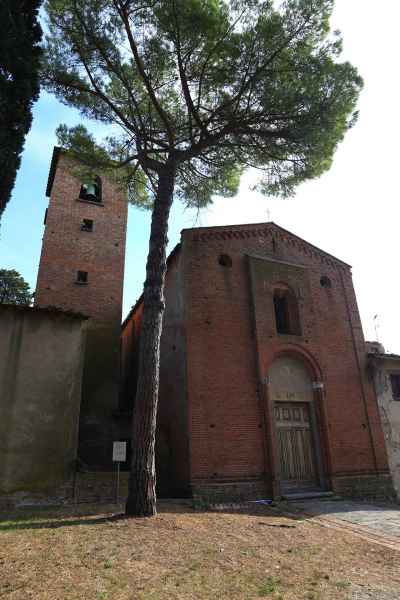 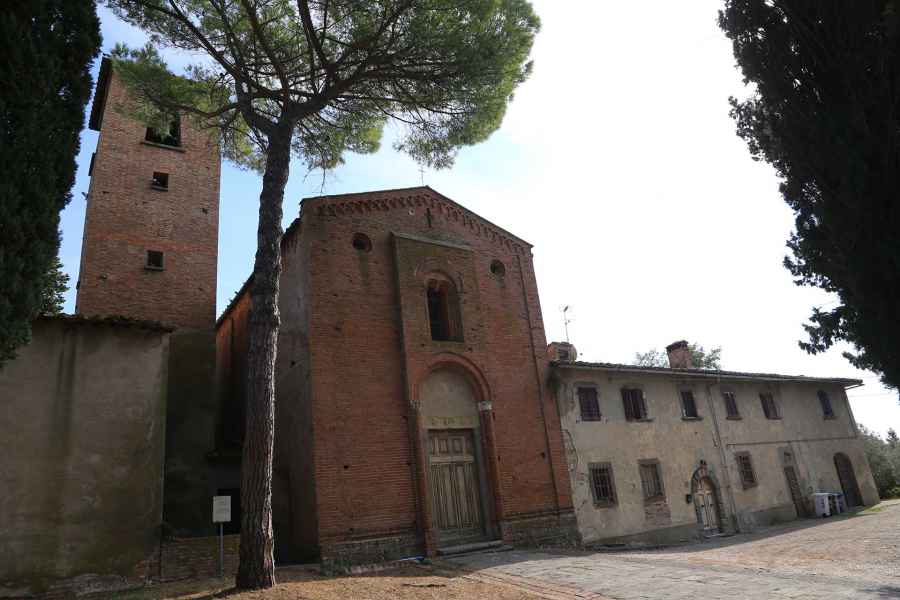 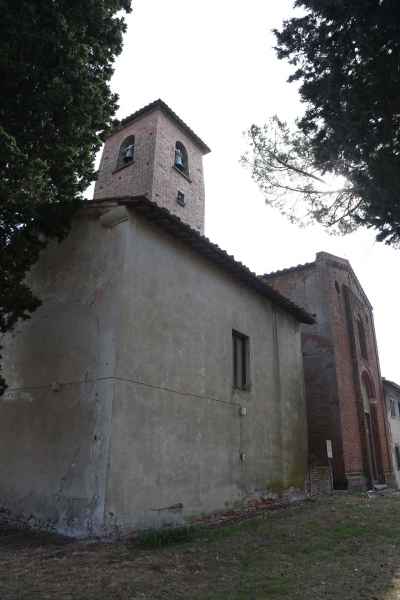 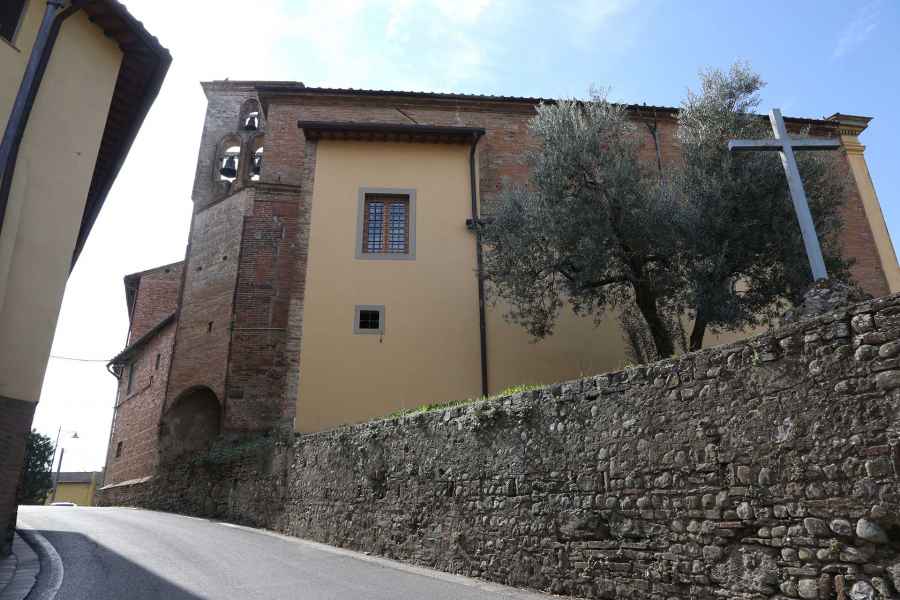 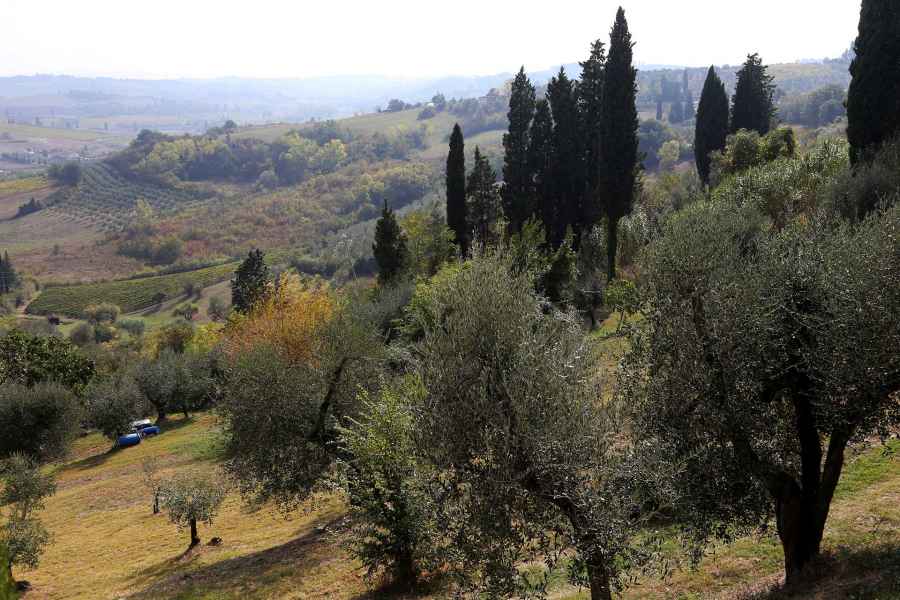 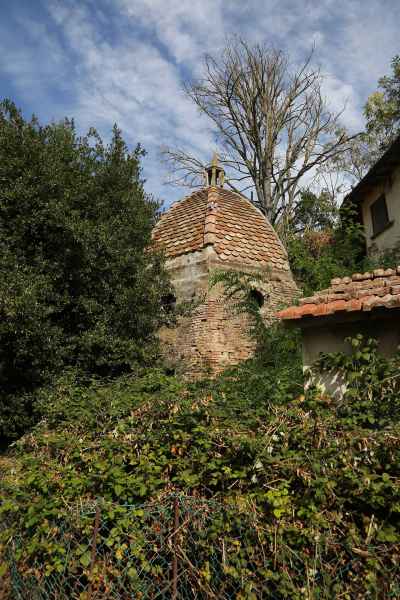 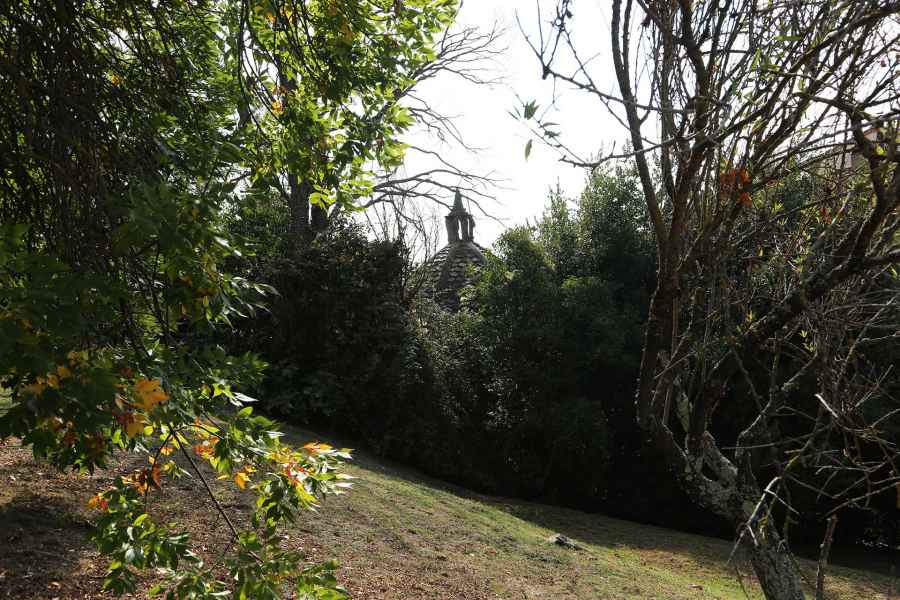