The turreted village that Leonardo depicts on the map RLW 12278, just north of the castle of Gambassi, near the river Elsa, can be identified with the castle of Catignano, as can also be deduced from the very clearly legible toponym reported on the map: "catignano." This is the aspect that Catignano must still have had at the beginning of the 16th century, when Leonardo represented it as a small castle surrounded by walls and fortified with towers.

The origins: the Cadolingi castle

The zone of Catignano had been one of the areas of influence of the noble family of the Cadolingi in Val d'Elsa since the first half of the 11th century. This area was, in fact, well connected to the family’s assets of the Valdarno, from the oldest route of the Via Francigena that passed nearby the parish church of Chianni, up along the ridges of the hills on the left side of the Elsa. The first attestation of the toponym concerns in a singular manner the abbey of San Salvatore at Fucecchio. In the locality of Catignano there were lands donated to the abbey by the Counts Cadolingi in 1008 and later, in 1034. This locality, together with that of Cambiano, constituted the nucleus of the farthest outlying possessions with respect to with the greater part of the abbatial goods, concentrated for the most part the lower Val d'Elsa, the lower Val d'Egola, and the territory around Fucecchio. Another interesting element: in the donation paper from 1034, the locality "Santo Stefano," not yet identified, also appears, which however could be identified with the site of the castle of Santo Stefano in the Val d'Egola, near Montaione, whose origins remain unknown, but which would have been part, like Catignano and Cambiano, of the most ancient nucleus of Cadolingi assets of the upper Valdelsa. Nonetheless, written sources recall a castle in the locality of Catignano only in the second half of the century, in 1075, when Count Ughiccione dei Cadolingi found himself in the place called Catiniano, near the castrum, drawing up a document of concession concerning the noble family, then involved in the founding of the monastery of San Vittore. Catignano was therefore one of the Valdelsan castles of the Counts of Fucecchio. In fact, on several occasions we find them in Catignano, engaged in the act of drawing up documents relating to their possessions in the Valdelsa. They are always accompanied by personages of the local nobility with whom they had patrimonial relationships and with whom they certainly tied personal bonds. In 1093, we find Count Ughiccione still in Valdelsa, in Catignano, in the company of a personage from the Ghisolfi family, Ildibrandino del fu Pagano. On that occasion, the return was ratified of assets pledged for financial aid received by the count. The money was needed by Ildibrandino and his father to finance the works for the fortification of Montespertoli, one of the main localities where this family group was rooted. Among the possessions of the Ghisolfi, distributed between the Val di Pesa and the Valdelsa, there are some located in the immediate vicinity of Catignano. A few years later, at the beginning of the 12th century, we still meet members of the Cadolingi in the Catignano area. In 1104 Counts Ugo and Lotario are, in fact, found in Varna, together with some personages of the small local nobility, personages who in the following century would be among the protagonists of the founding of the castrum novum of Gambassi. In these places, therefore, where the reciprocal possessions intersected, the families of local lords had the possibility of forging personal relationships with the counts of Fucecchio. The castle of Catignano would be ceded by the counts of Fucecchio, between 1104 and 1105, partly to the family abbey of Borgonuovo and in part to the bishop of Volterra. In 1118 the part of the curtis of Catignano belonging to the abbey of San Salvatore was ceded by Abbot Rolando to the parish church of Chianni in the Valdelsa, diocese of Volterra.

The castle of Catignano between the Counts Alberti, the bishop of Volterra

With the extinction of the house of the counts of Fucecchio at the beginning of the 12th century, the shrewd matrimonial policy of Count Tancredi-Nontigiova of the Alberti allowed this house to acquire a large part of the Cadolingi heritage, including several castles of the Valdelsa. In 1126 a portion of the castle of Catignano was donated to Gofferdo degli Alberti by the widow of Rodolfino da Catignano, an exponent of the Ghisolfi family, a noble family linked since ancient times to the counts of Fucecchio (see: origins of Montespertoli). A part of the castle was instead merged into the refectory of the prelate of Volterra, together with the neighboring villa of Varna. Finally, the 1164 diploma of Frederick I confirms possession by the house of Alberti of the fourth part of the castle of Catignano. On this date, therefore, at the end of the 12th century, the famous imperial recognition highlights the extensive possessions that the Alberti had consolidated or acquired in the last period in Val d'Elsa and Val di Pesa. The 1164 diploma confirms possession by the Alberti, not only of Catignano, but also of the castles of Certaldo, Castelfiorentino, Lucignano, Salivolpe, Pogni, Fondignano, Ripa, Dagole, and Colle Val d'Elsa.

Catignano between the cities of San Gimignano and Florence

NWithin a few decades, however, the policy of expansion of the town of San Gimignano, now freed from the mark of the ancient lord (the bishop of Volterra himself), began to erode a large part of its prerogatives, constraining many castles of the bishop in the area to acknowledge submission. Throughout the 13th century, the presence in Catignano is documented of personages probably related to the bishop—nobiles, who seem to guarantee the castle a certain autonomy from interference from San Gimignano. However, there is no shortage of evidence attesting to Catignano’s dependence upon the municipality of San Gimignano, which was then forming the territory of its jurisdiction. In 1267, the men of Catignano were forced, in fact, at the request of the municipality of San Gimignano, to lend their arms, participating in the destruction of the castle of Ulignano. At the end of the 13th century, the castle of Catignano was annexed to the Florentine contado. During the course of the 14th century, a period rife with raids and looting all along the Valdelsa, the castle of Catignano—as well as the neighboring villa of Varna—was particularly exposed to the consequences of the passage of armies along the ridge route of the Via Francigena on the left of the Elsa. In 1313, for example, the Florentine militias who were in the area were ordered to neutralize all the buildings scattered throughout the territory (houses, huts, barns), which could be used as a support bases for the enemy. On the contrary, it was ordered that the castle of Catignano and the villa of Varna be protected, as well as the castle of Gambassi. Walled or otherwise centralized villages were still considered points of refuge for the population, in case of danger.

In recent years the site has been the subject of a specific project by the Medieval Archeology area of the University of Siena. The objectives, in addition to reconstruction of the stages of life of the castle, and therefore of the dynamics of settlement of this part of the Valdelsa, are also the study of the glass workshops and the production environment of the small town. The archaeological investigations have brought to light the remains of the castrum, located behind the small chapel of San Martino. The last transformation of the ancient Cadolingi castle (stone buildings), which was converted into a rural residence as a farm center (reuse of previous structures, new brick buildings), must correspond to the building complex drawn by Leonardo. The shape represented by Leonardo, that of a small walled village, suggests that Catignano possessed, even at the beginning of the 16th century, the physiognomy of a small castle.
Texts by
Silvia Leporatti / English translation by John Venerella
Related resources
Related places
Gallery 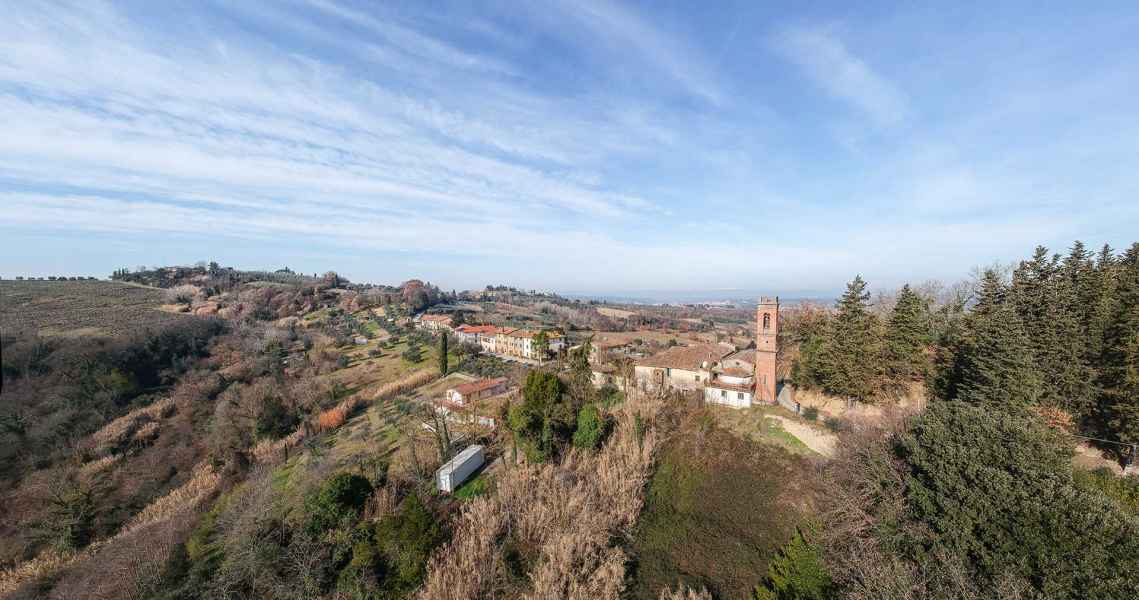 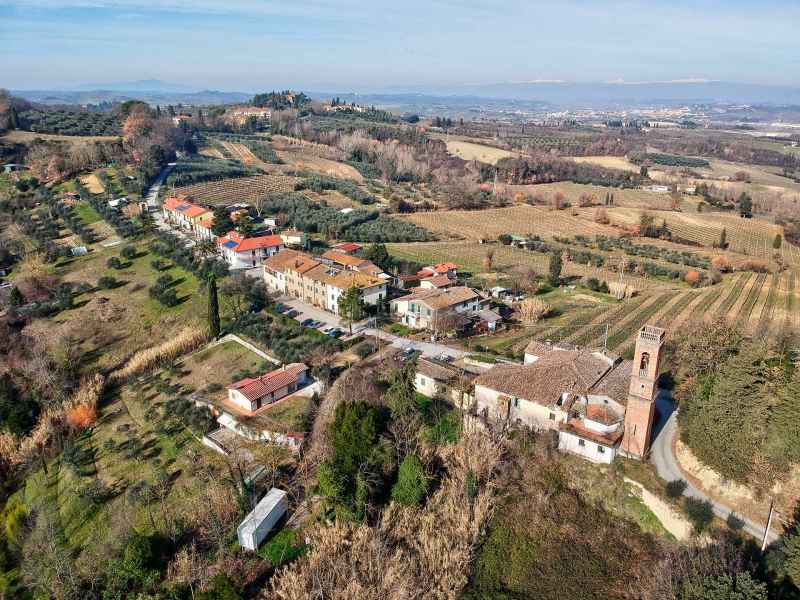 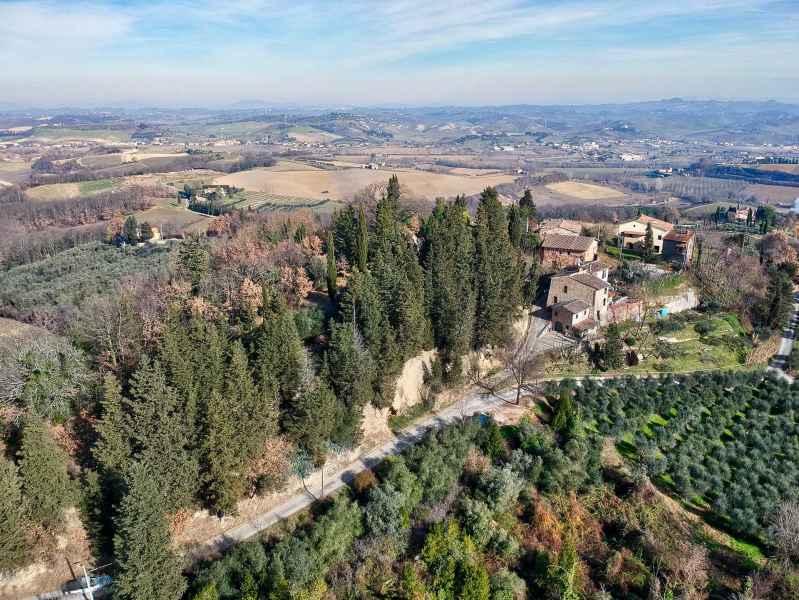 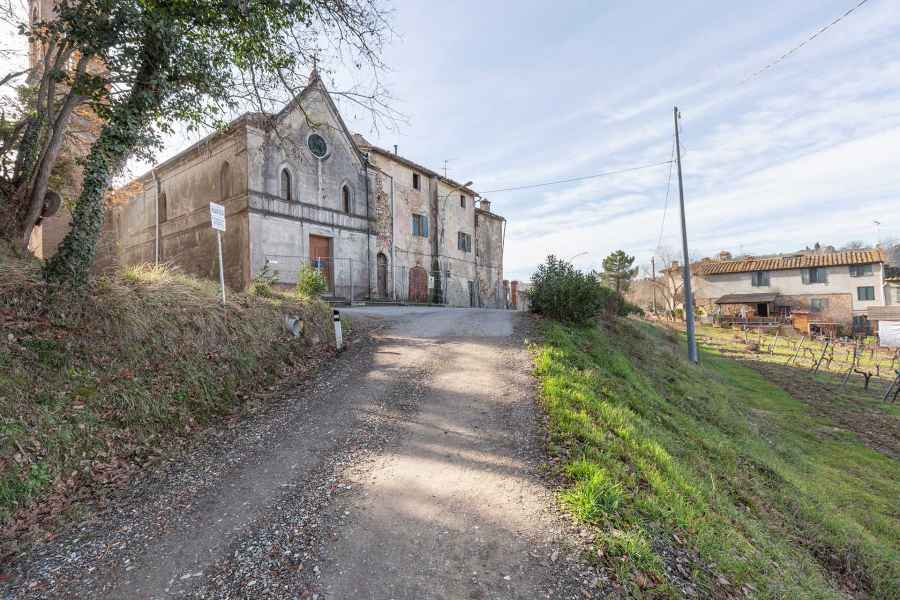 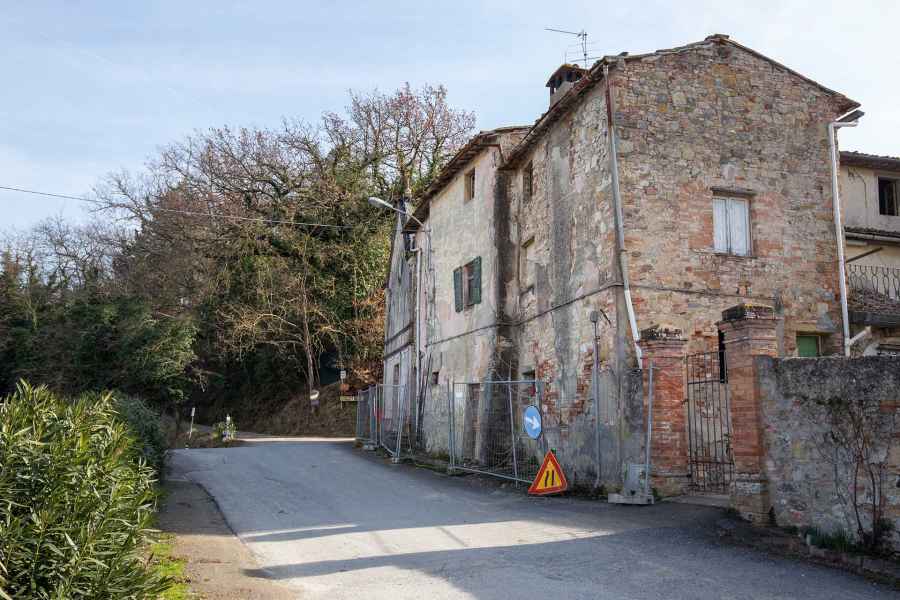 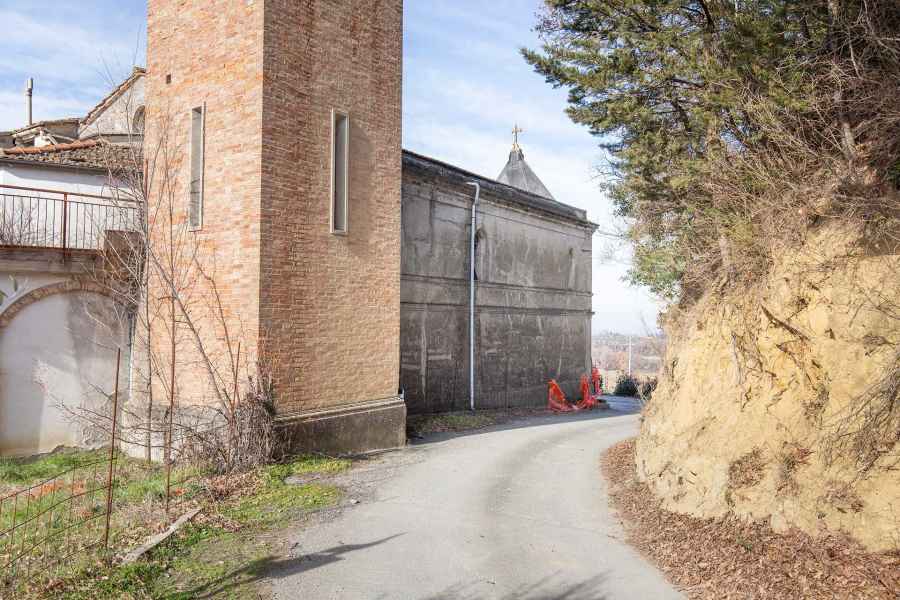 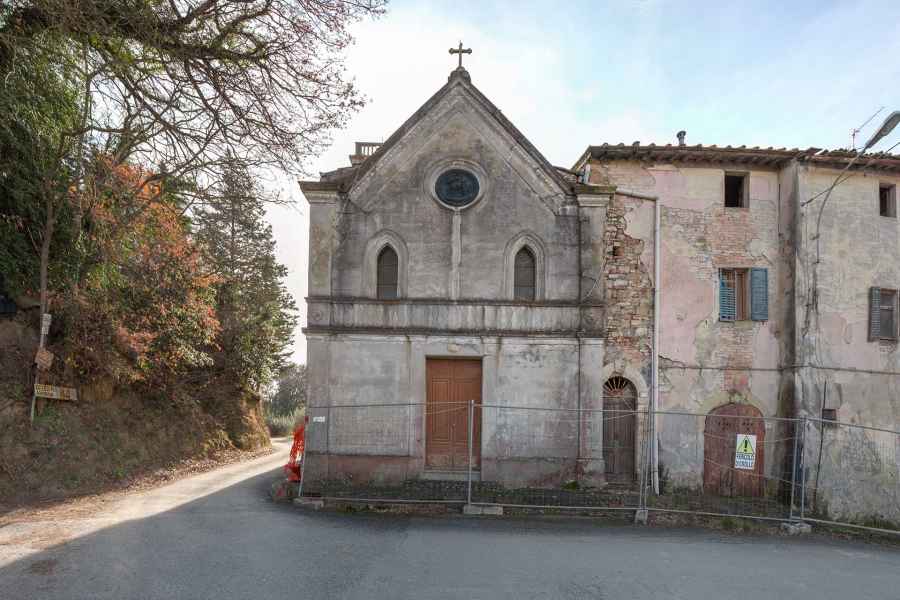 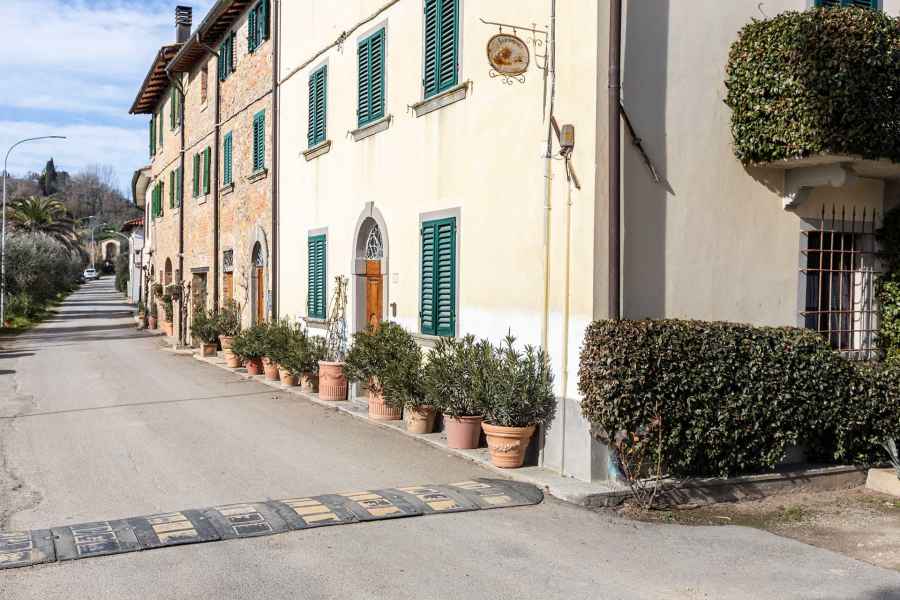 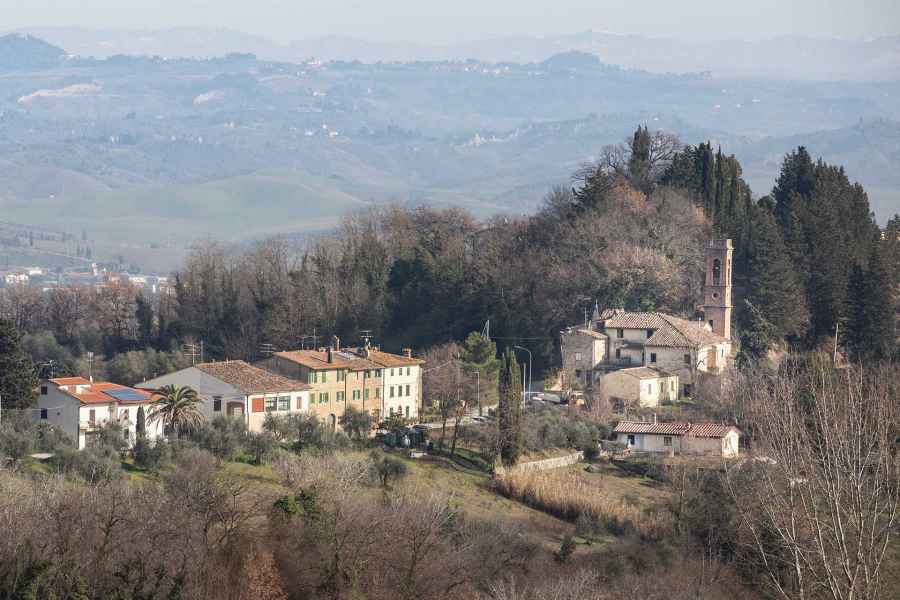 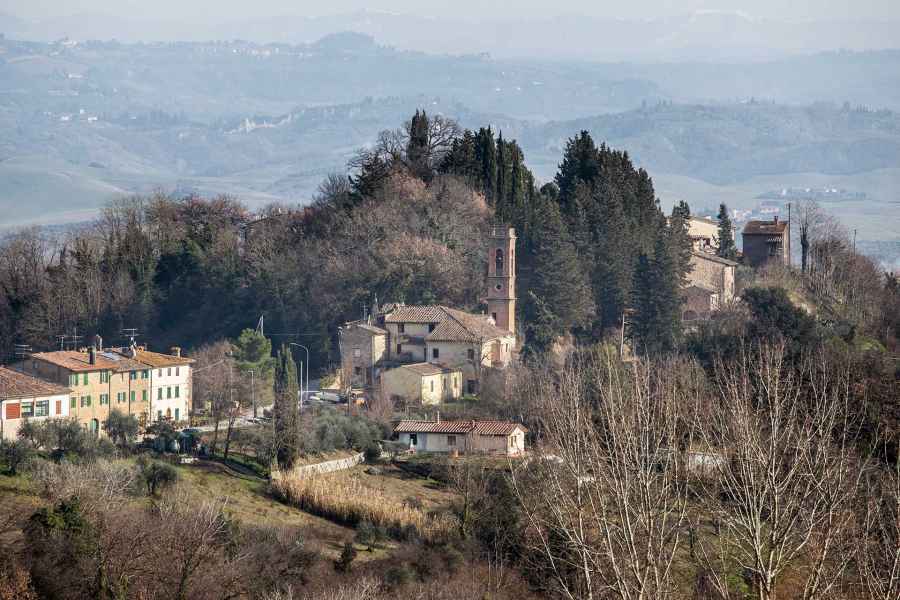