Leonardo depicted the village of Empoli in the form of a regular, square-shaped settlement, well-equipped with defenses. In the Windsor Castle Collection map of the Arno Valley (RL 12685), known for the project of realizing a navigable canal through the valley of the Ombrone Pistoiese, the most important villages of the Lower Valdarno are represented, including Empoli, enclosed within the walls of the third circuit. It was in this form that Leonardo had the opportunity to observe the settlement: from the heights descending toward the Arno valley, from the Vinci slope of Montalbano, that is, from the area of ​​Greti, Leonardo could see the new walls of Empoli on the opposite slope. These were the mighty walls of Sangallo, which almost touched the Arno, since at that time the river ran much closer to the village of Empoli than it does today. Those lands, to the left side of the flowing Arno, had been inhabited for some time, but it was only at the beginning of the 12th century that the oldest nucleus of Empoli took origin, the castle founded by the Counts Guidi.

Imporium and the castle of the Counts Guidi

During the Early Middle Ages, the shore lapped by the left side of the Arno bore the name of Imporium and was characterized by several settlements that were part of the parish church. At the beginning of the 12th century, after the extinction of the powerful family of the Counts Cadolingi of Fucecchio, the holders of land and rights on both sides of the Arno, the lands of Imporium were profoundly marked by the operation carried out by another noble family, that of the Counts Guidi. For some decades the Guidi family had undertaken the acquisition and foundation of numerous castles in Greti, including Colle di Pietra, Musignano, Masarella, Larciano, Cerreto, and Vinci. In 1119 Count Guido Guerra, in a genuine act of foundation, fortified the ancient village of the local population, the parish church of Sant’Andrea, which had already been built in the forms of Florentine Romanesque at the end of the 11th century. The new inhabited village came therefore to coagulate around its ordering pole, the parish church, next to which stood the baptismal building, the church of San Giovanni, since 1106. Of this, today, there remain some pieces of masonry and a portal inside of the Collegiate Museum. From the 13th century deeds of transfer of the Guidi assets of the Valdarno to Florence, we learn some topographical details of the oldest castle. The space in front of the church and the baptistery became the market place, the commercial heart of the new settlement, upon which shops were subsequently built, of masonry; the market square was dominated by the massive palatium of the Counts Guidi, identifiable in the current Palazzo Ghibellino. The Guidi’s vocation for Empoli, built on the banks of the river, and straddling an important land route that went all the way to Pisa, was for it to become the most important commercial arena of the Florentine Valdarno, and this is what happened.

Florence and the village of Empoli

From the middle of the 13th century, Empoli had by this point entered the Florentine orbit: between 1254 and 1255, the transfer to the city of the palatium vetus of the Counts Guidi and the market place, with the ten shops that faced onto it, is documented. At the end of the century, the important village of the Valdarno grew up around the market place, the heart of the castrum, bordered by two parallel streets oriented east-west, which issued from the village through four gates, two on the Florentine side and two on the Pisan side. We know the names they had in the early 14th century: the Porta Nuova and the Porta Fiorentina on the east side, and the Porta dell’Ospedale and the Porta del Noce on the west side. The road parallel to the Arno that issued from Florence, in fact, forked in the vicinity of the walls, entered from the two eastern doors into two segments that ran through the urban center, flowed into the market and left through the two western gates, to then converge again on the road to Pisa. On the square layout of the 13th-century walls there was also a north door, the Porta d’Arno, which led to the port and to two mills, roughly in the present Rozzalupi district, where the oldest mill in Empoli is located. Toward the south, one came out through the Porta Senese, beyond which, at the time, an extramural village had already arisen. At the points of the bifurcations of the Via Pisana, both in entry and exit from the village, two towns had formed, with a characteristic triangular shape.

The wreck from the 1333 flood and Leonardo's navicelli (small ships)

It was after the 1333 flood of the Arno that the small river boat found near Empoli in 1981 was shipwrecked. The navicello is extraordinarily well preserved, and quite similar to the example drawn by Leonardo on one of the folios of the Codex Atlanticus (f. 27r). The objects recovered from the wreck, including an archaic majolica jug, allow us to date the shipwreck to the first half of the 14th century, making it likely that the cause of the event was connected to the 1333 flooding of the Arno. Also recovered from the ship was a caulker’s axe for on-site adjustments to the keel, and a steelyard, which indicates to us that the function of the boat was for freight transport. The scale reconstruction of the Empoli navicello, with its objects recovered from on board, can be visited in the archaeological section of the Museo Civico di Fucecchio. Extensive documentation on the work of the master hull-working craftsmen who operated on the banks of the Arno during Leonardo’s time can be examined at the Centro Espositivo della Cantieristica navale e del Canottaggio di Limite Sull’Arno.

The Arno flood and the new 14th-century walls

In 1333, the walls of Empoli were completely destroyed by the Arno flood, and rebuilt ex novo subsequent to a Florentine resolution, with a perimeter slightly larger than the previous one. The new walls, in brick, were equipped with battlements and surrounded by a moat, as seen in a famous tempera on canvas by Bicci di Lorenzo from 1445, San Nicola da Tolentino Protects Empoli from the Plague, conserved in the church of Santo Stefano. Beside the saint, we can see the Porta del Noce and the Porta Senese, both with embattled crowns protruding on corbels. The second gate had a drawbridge over the moat, connected to a vestibule in masonry. Very few remainder pieces and some towers are preserved from this wall circuit: the Torre dei Righi, between Via Ridolfi and Via Paladini, and the Torre dei Frati, incorporated together with a part of the walls in the complex of the Augustinian monastery. The 14th-century walls of Empoli were radically overcome a century later, with a modification introducing avant-garde military architecture. These are the walls Leonardo had before him when he depicted the quadrangular, turreted layout of Empoli in the celebrated bird's-eye view of the Arno Valley.

Leonardo and the Medici walls of Empoli

A little over 20 years after the fresco by Bicci di Lorenzo, the Florentine Republic decided to build a new circuit of walls for the village of Empoli: an exceptional case, certainly due to reasons of military strategy. The new defensive system, built between 1466 to about 1500, was designed by the most avant-garde military architects of the time, who then worked in service of the Medici, Antonio il Vecchio and Giuliano da Sangallo. The area surrounded by the new walls was slightly larger than that of the 14th century area, but was built according to innovative defensive criteria. In the new layout, the access gates were reduced from six to four, one for each side of the quadrilateral. The two gates on the east and west sides, for entrance and exit of the Via Pisana, were positioned so that the internal road axis between the two doors fell right on the town’s central block. In essence, anyone who entered from the Via Pisana found himself faced, as has been pointed out by more than one observer, by the barrier of the houses of the central block, which had to be skirted, on the right or on the left, in order to make use of the village’s inner streets. Recent analyses of the surviving structures of the original defensive layout of Empoli, such as the circular tower of Santa Brigida, have demonstrated the use of technological and structural solutions on curtain walls, ramparts, or in the type of loopholes characterizing the new military architecture. The mighty walls of the brothers from Sangallo are perfectly recognizable in the very detailed fresco, by Giorgio Vasari, of the hall of Clement VII in Palazzo Vecchio, dated 1555–60, representing Empoli during the siege of 1530. The brick walls with escarpment, terminating in the moat, can be seen, along with the four gates and the square-based corner towers advanced along the line of the walls, as well as the semicircular wall towers on each side. This is the image Leonardo had before his eyes when he depicted the turreted quadrilateral of Empoli on the beautiful bird's eye map of the Windsor Castle Collection RL 12685. In the drawing, the village of Empoli, in its regular layout, it its walls defended with corner towers, is a very short distance from the castle of Pontorme, depicted with the 14th-century walls of a fortified village. The two villages are connected by the thin line of Via Pisana.
Texts by
Silvia Leporatti / English translation by John Venerella
Related resources
Related places
Gallery 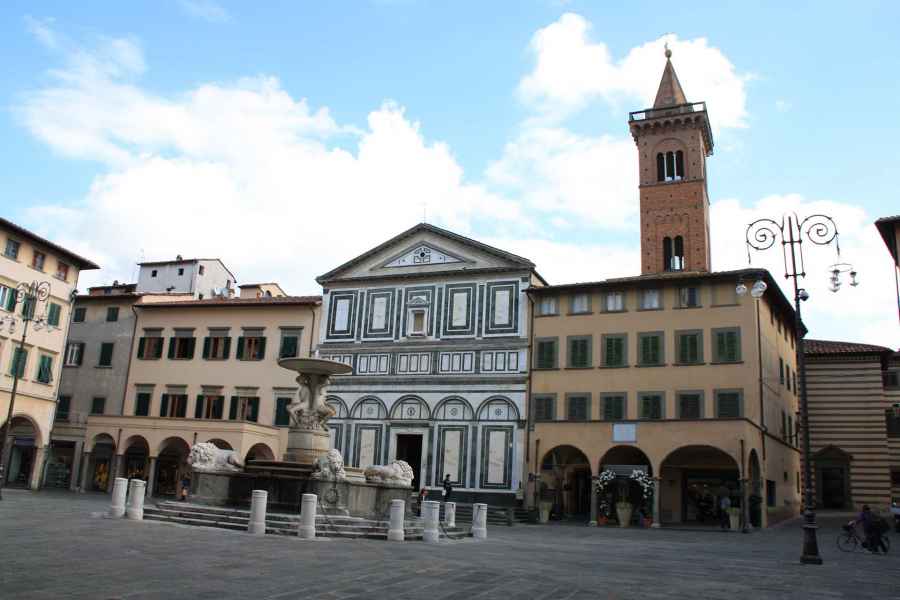 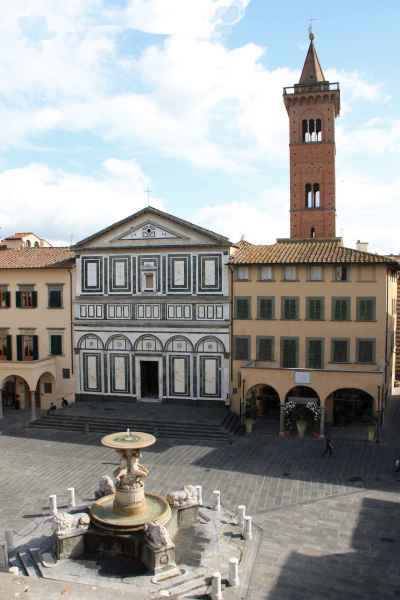 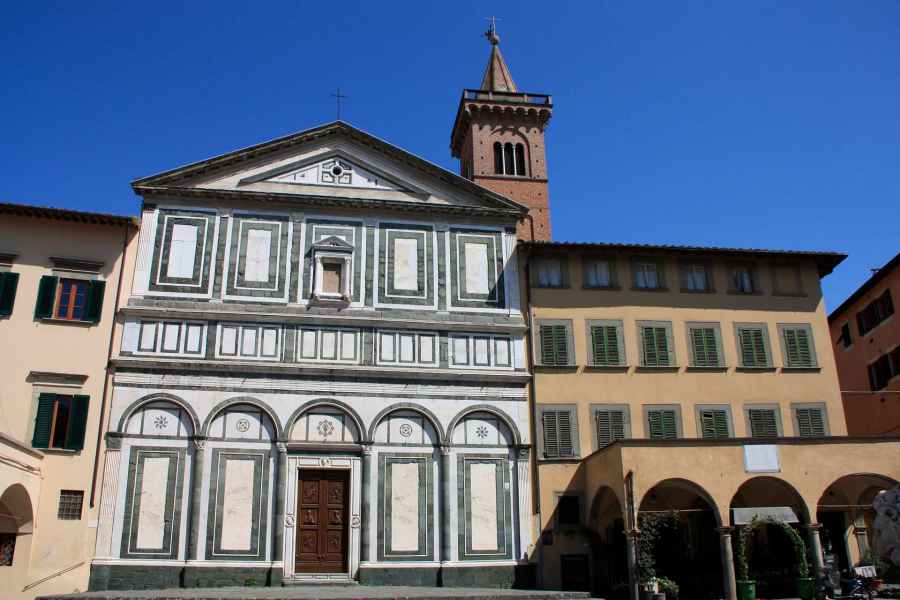 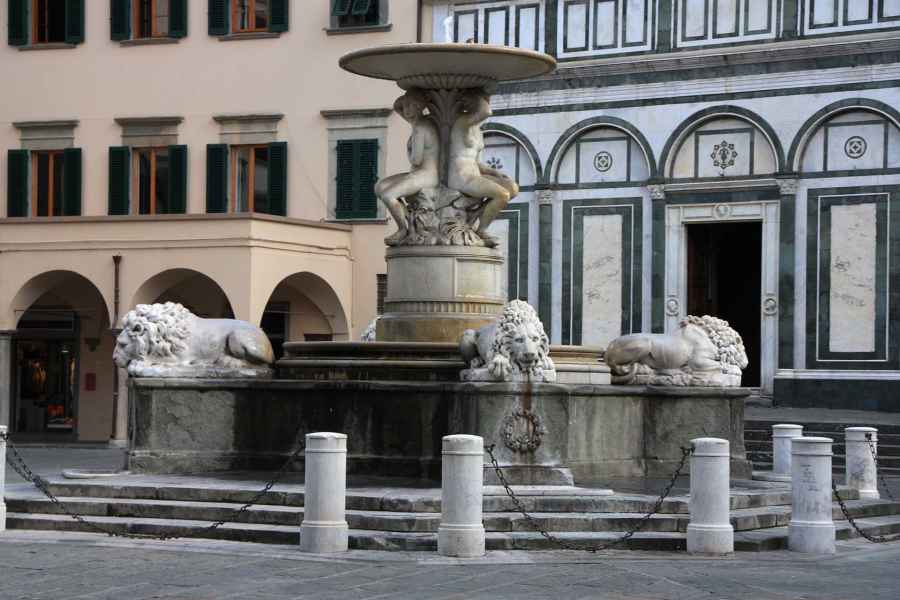 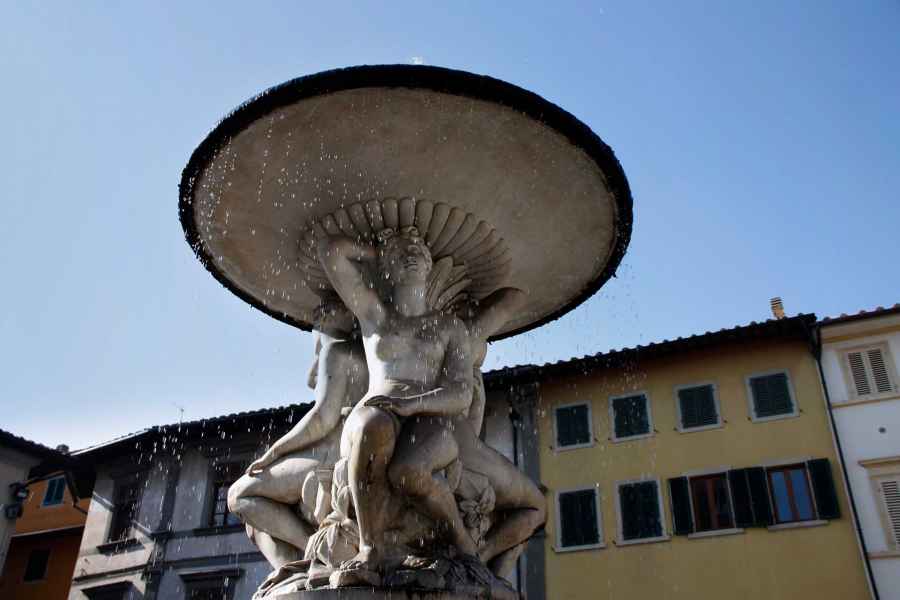 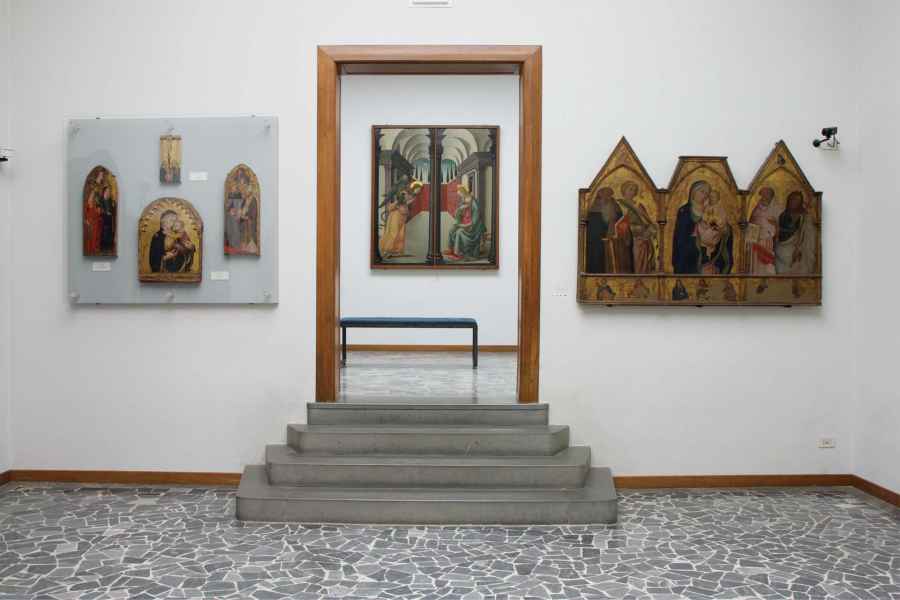 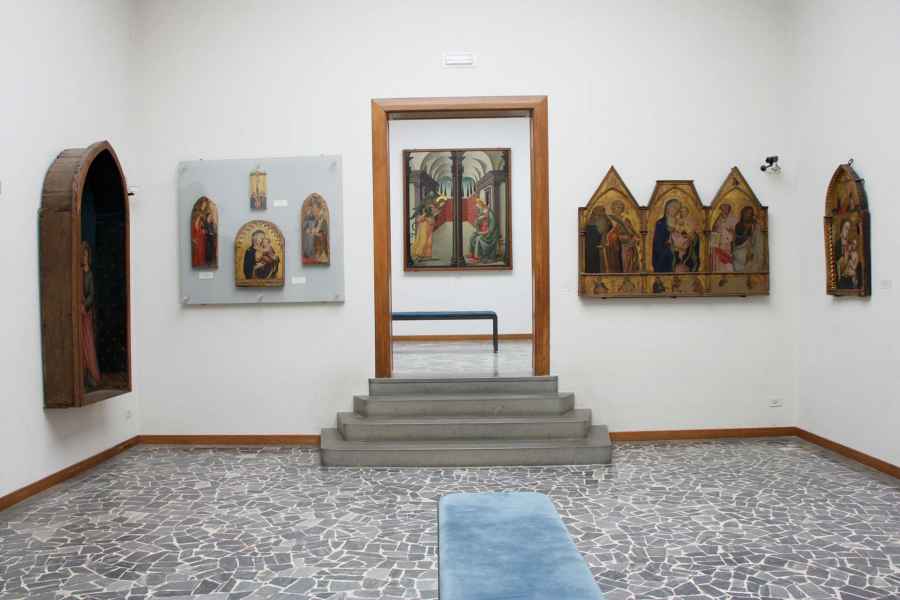 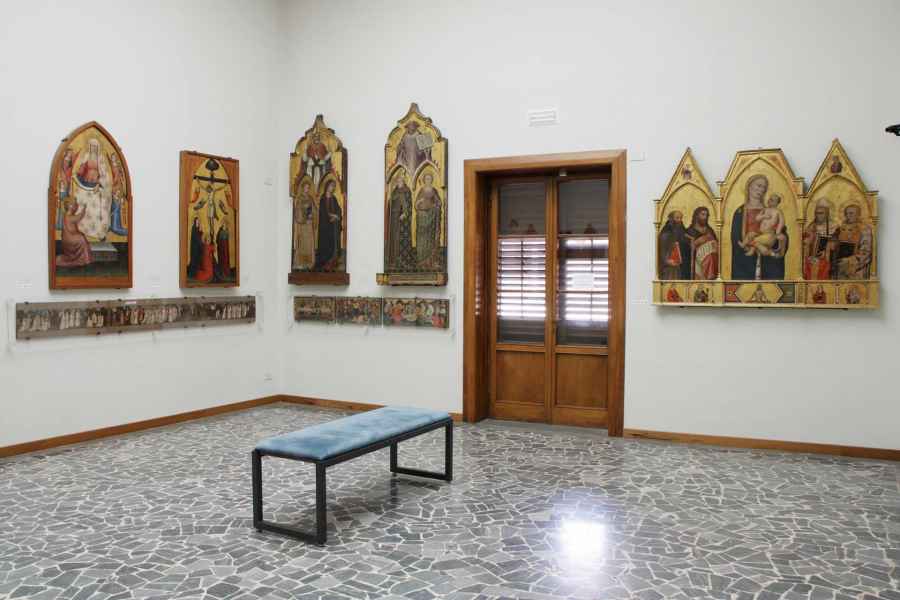 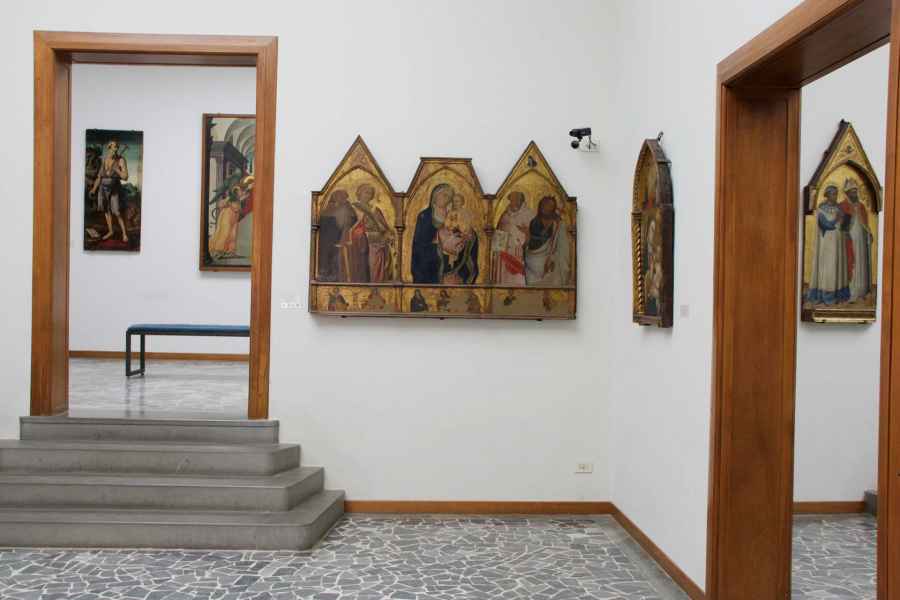 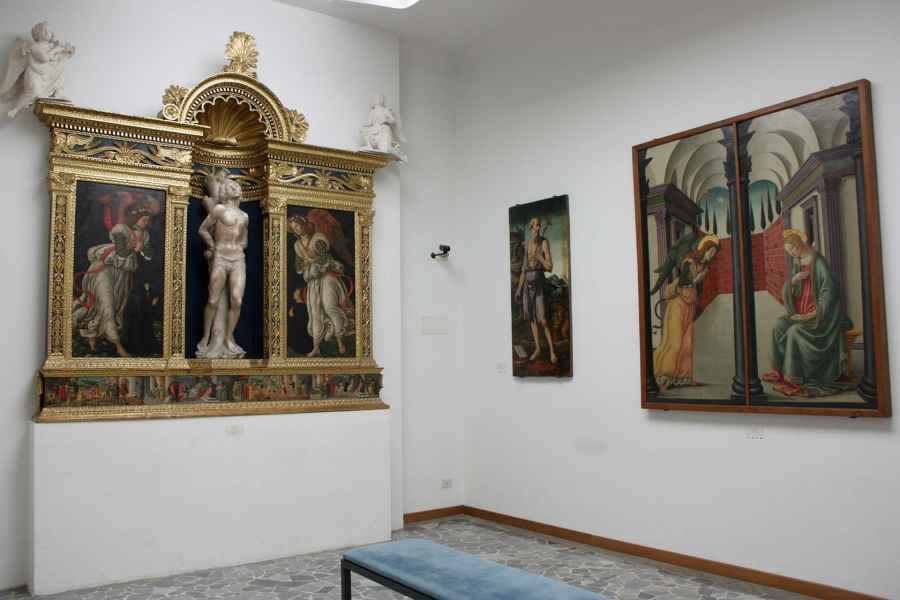 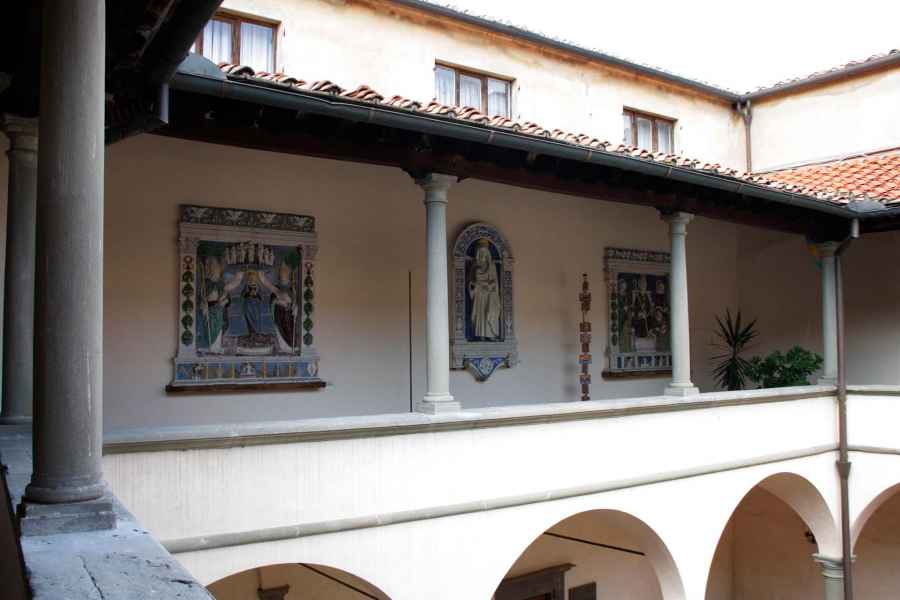 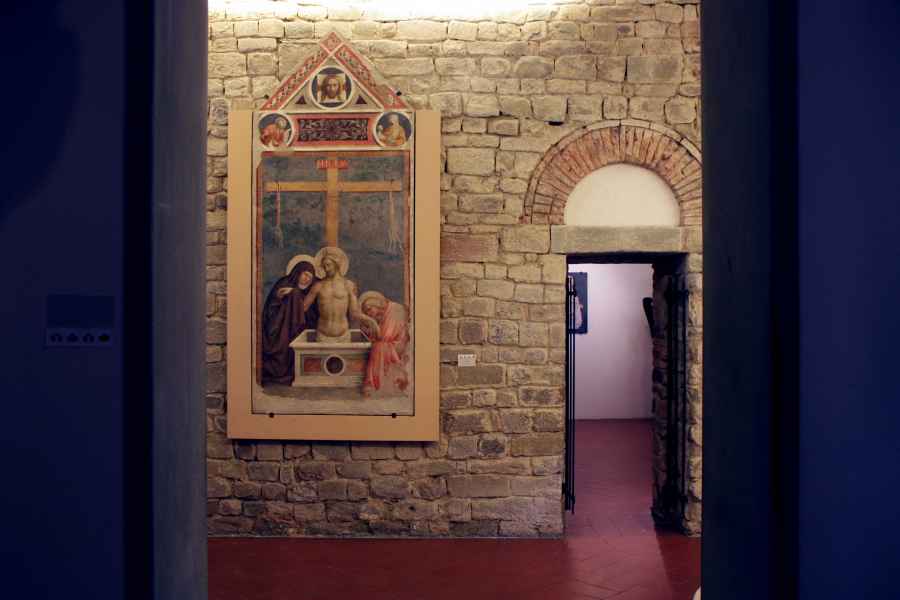 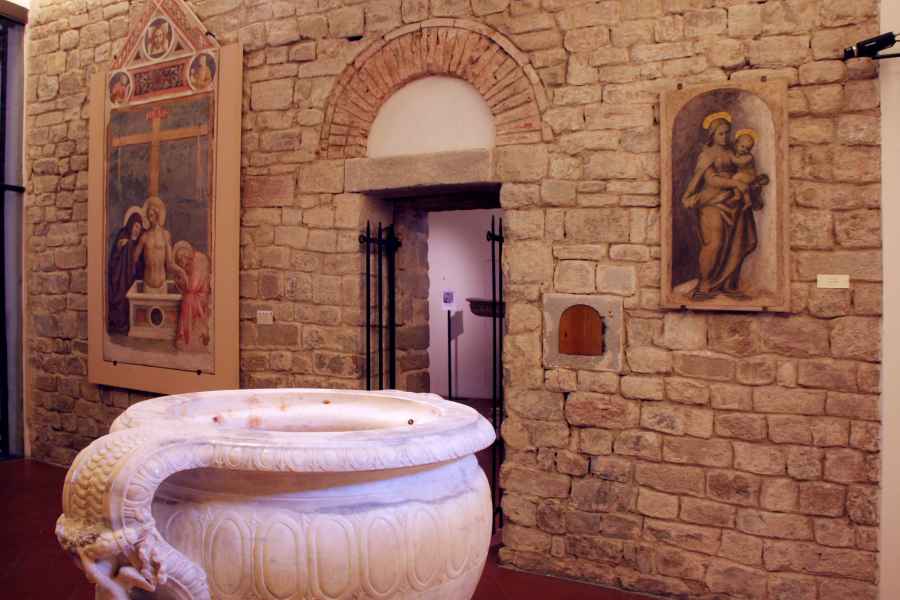 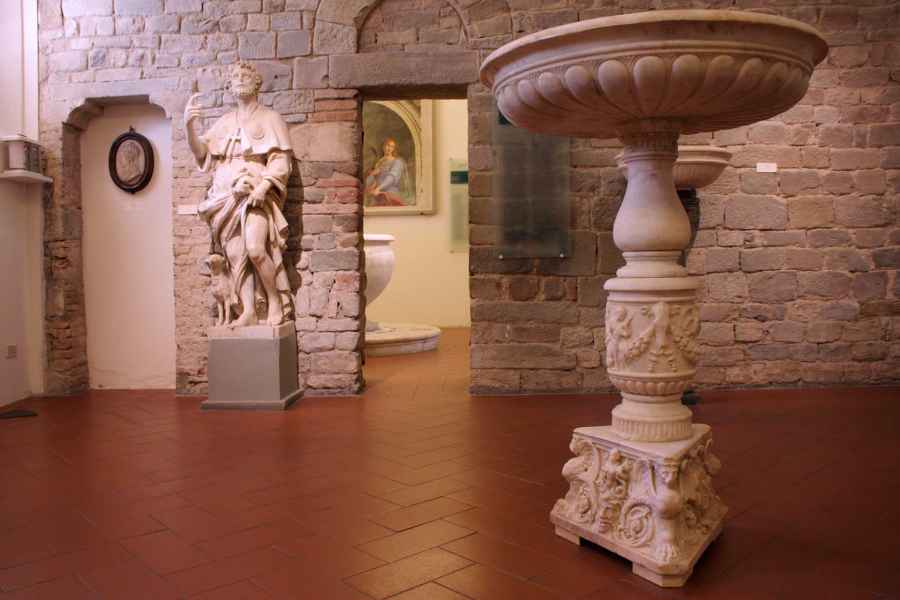