Today the ancient localities of Limite and La Castellina form one single hamlet, part of the municipality of Capraia e Limite. The history of these settlements dates back to the Early Middle Ages when, near the right bank of the first large meander of the Arno River, downstream from La Gonfolina, the interests of aristocratic families originating from Pistoia and of the bishop of that city were concentrated. In the Leonardian map of the Windsor Castle Collection RL 12685 representing this part of the Arno, Leonardo represents, at one of the meanders just above Capraia, a turreted village marked by the toponym castellina, however there is no trace of the community of Limite, which at the time was clustered around the church of San Lorenzo.

The early centuries of the Middle Ages. Loco limite (the locality of Limite)

The town on the banks of the Arno that has been referred to since the Early Middle Ages by the name of Limite must originally have been among the possessions of the Counts Guidi in partibus Greti. In the year 957, Count Guido, the son of the late Count Tegrimo, donated to the rectory of the Pistoia cathedral of San Zeno a casa et res massaricia. In the following century the powerful Pistoian institution still received substantial donations of goods in that area, including a clausura (castle or cloister), an estate with residences, lands, and vineyards, enclosed by a moat and a surrounding wall (fossa et cesa circumdata). Among the witnesses for the act was a well-known personage, Rodulpho b.m. Petri, who belonged to one of the Pistoian families linked to the bishop and at that time held possession of the castle of Bacchereto. In 1080, the existence was documented of a mulino in loco limite (mill in the locality of Limite), also part of the complex of the assets owned by the Pistoian cathedral. The parish of Limite, documented since the early 12th century, was dependent on the diocese of Pistoia. In the famous memorial, Bishop Ildebrando recalls the tithes that had long been due to the bishopric. Among the personages who were mentioned appeared also the sons of Rudolfino di Rodolfo, the aforementioned nobles of Bacchereto.

In this town one of the most remote parish churches within the diocese of Pistoia was located, the plebs de Limite (parish of Limite). The first document mentioning it dates back to 1132, and in subsequent documents, it is referred to as dedicated to Santa Maria. The parish church of Santa Maria Assunta, radically transformed between the 17th and 19th centuries, was located in the village of Limite sull'Arno, in Piazza Don Valiani, near the district bearing the name of La Castellina. The contiguous Oratorio della Santissima Trinità is adorned by a painting representing la SS. Trinità con donatore (holiest Trinity with donor), attributed to Giovanbattista Naldini (1537-1591), who was a pupil of Pontormo. On the opposite side of the current town of Limite stands another church, San Lorenzo, also documented in the 14th century as dependent on the parish church of Santa Maria, but considered the oldest parish church of Limite. It is preserved in rather late forms, in the Piazzetta di San Lorenzo, located in one of the oldest parts of the hamlet of Limite.

La Castellina, today a small district of the town of Limite sull'Arno, does not appear in written sources until the early decades of the 13th century, when Castellina iusta Arnum was one of the rural municipalities of the Pistoia districtus. At that time La Castellina was decisively on the border between the areas controlled by the two cities of Pistoia and Florence. In fact, we know that the territory of the ancient castle of Collegonzi, ceded to Florence by the Counts Guidi in 1254, bordered the territory of La Castellina, then under Pistoia. The Pistoian maps confirm the possession of this important bulwark on the Arno: in the last quarter of the 13th century, together with the castle of Castra and Popigliana, La Castellina was dependent on the jurisdiction of the Pistoian podesta based in the castle of Vitolini. And like the castle of Vitolini, at the time when the zone of ​​Greti became one of the most sensitive areas in the war waged by Lucca and Pistoia in their attempt to counter Florence’s thrust, La Castellina, also, entered to become part of the Florentine contado. After 1329, the year of the peace stipulated between Florence and Pistoia, the Pistoian part of ​​Montalbano—which included, among others, the castles of Carmignano, Artimino, Bacchereto, Vitolini, and Castellina—effectively became part of the contado of the city of Florence. And it was probably within the framework of the strengthening of the strongholds put in place by the city during the 14th century in this sector of ​​the Lower Valdarno that we must conceptualize the development of the defenses of La Castellina iusta Arnum.

In the famous bird-eye map of the Windsor Castle Collection (RL 12685), on one of the southern foothills of Montalbano, the toponym castellina is clearly identified, referring to a settlement that Leonardo depicted as a castle overlooking one of the bends of the Arno. Effectively, in the part downstream from Capraia, the river formed two major meanders, reaching La Castellina on the one side and Pontorme on the opposite; the two villages are depicted in many of Leonardo's maps dedicated to the Arno Valley. In Leonardo’s representation, La Castellina appears well fortified, defended by a wall cadenced by wall towers. Today there are no traces remaining of those structures of La Castellina's 14th-century castle other than the image Leonardo depicted at the beginning of the 16th century, when the small rural town was evidently still characterized by the fortifications erected by request of the powerful city of Florence. Of these fortifications, we find a clear reference in the reports written by the Ufficiali delle Castella who were periodically engaged in surveying the castle defenses in the Florentine contado. Among the castles of the Valdarno appearing in the 1366 survey, we also find listed La Castellina, next to Capraia and Vitolini, which must therefore already have been equipped with defense structures in masonry.

The ferrymen and nautical hull workers of Limite

In the Late Middle Ages, therefore, La Castellina was a rural municipality inserted in the administrative framework of Florence, whereas Limite was a small community belonging to the church of San Lorenzo, on the banks of the Arno. In the Florentine land registry of 1427, the municipality of La Castellina was constituted of 26 families, by comparison with the 15 of the community of San Lorenzo a Limite. At the threshold of Leonardo's time, La Castellina and Limite were therefore two distinct settlements, where the first, in the administrative form of a rural municipality, represented the most densely populated center. Repetti informs us that in the mid-16th century La Castellina counted 220 inhabitants, while Limite stopped at 136. The inversion of trend came certainly after the middle of the 16th century, when the activities related to the production of boats and river navigation became the flywheel of Limite’s population development. The first evidence of navicellai (ferrymen) or scafaioli (nautical hull workers) active around Limite and Castellina dates back to the 15th century. The inhabitants of these localities began producing boats exclusively for use in the service of ferrying goods and people on the river. The Arno, in fact, was then navigable from Capraia all the way to the sea, and Limite’s position was central and strategic in relation to medieval commercial routes. Moreover, the stretch of the Arno flowing by Limite enjoyed characteristics particularly favorable to the construction of boats directly on the river. The timber for construction for Limite’s ferrymen and nautical hull workers was furnished primarily by the inhabitants of the communities of Castra, Conio, S. Jacopo a Pulignano, and Bibbiano. Archival documentation makes it possible for us to obtain indications regarding the origin of the ferrymen who, besides dedicating themselves to transport, were also scafaioli (nautical hull workers) or calafati (nautical caulkers), that is, craftsmen specialized in working wood for the construction of boats; these would then become the "master of the axe” (carpenters). If in the first half of the 16th century we find names of personages originating from La Castellina, Limite, Colle, and even Capraia, during the second half of the century the ferrymen and nautical hull workers were, for the most part, from Limite. The history of Limite sull'Arno for the last five centuries merges with that of the art of nautical construction, a story we can retrace by visiting the Centro Espositivo della Cantieristica navale e del Canottaggio di Limite Sull’Arno (Naval Shipyard and Oarsmen Exhibition Center).

Limite, the meanders of the Arno, and the navicelli (small ships) depicted by Leonardo

The particular conformation of the Arno in the stretch around Limite was certainly decisive in the development of activities related to river boat construction. This is because the river bent in a particular way at that point, forming a double meander, the first of which widened, at the shores of Limite, into a unique expense of water having almost no disturbing currents. This natural river basin was perfect for the set up of the industry that today we would call shipbuilding. The double meander of the Arno at Limite can be seen in many of Leonardo’s maps of the Arno Valley for the renowned project for a navigable canal from Florence to Pisa, such as, for example, that of the double folio in Codex Madrid II, ff. 22v-23r, or the famous bird’s eye view in the Windsor Castle Collection (RL 12685). The numerous Leonardian images of the bends of the river between Limite and Pontorme slightly precede the operations of rectification that have canceled the second meander. Inside the remains of that deep curve of the river, the paleo-meander identified by the toponym Arnovecchio, today there is a naturalistic oasis curated by the Centro di Ricerca Documentazione e Promozione del Padule di Fucecchio (Research Center for Documentation and Promotion of the Fucecchio Marsh), where it is possible to observe flora and fauna typical of marsh wetlands.

In 1981, near Empoli, the wreck of a navicello (small ship) for river navigation was found, quite similar to the one drawn by Leonardo on one of the folios of the Codex Atlanticus (f. 27 r). 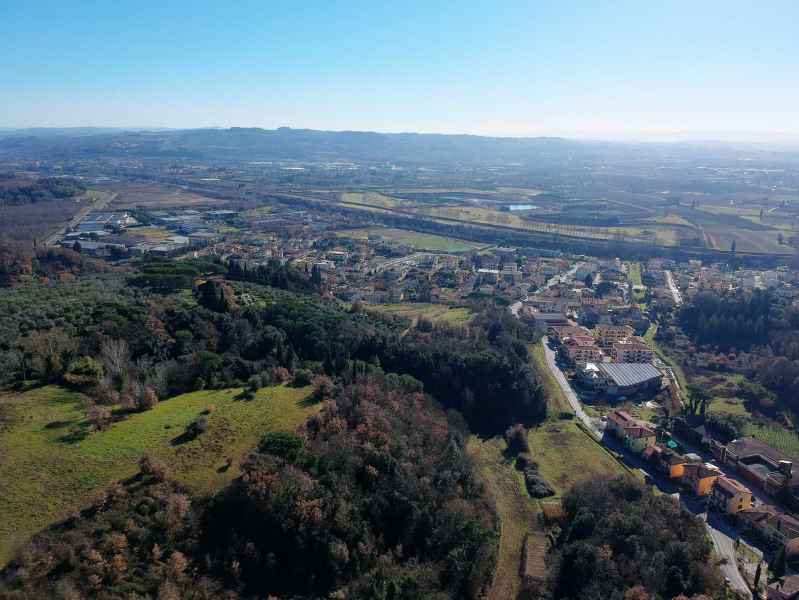 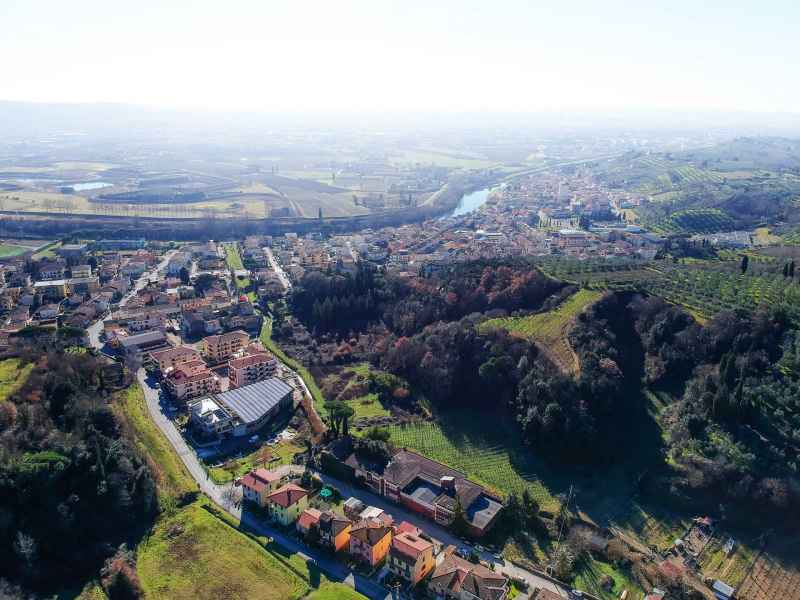 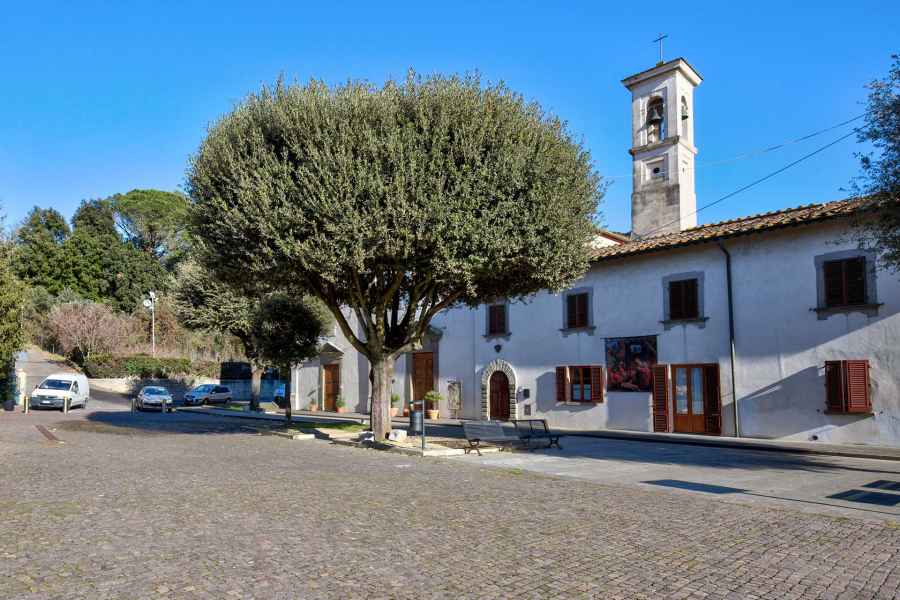 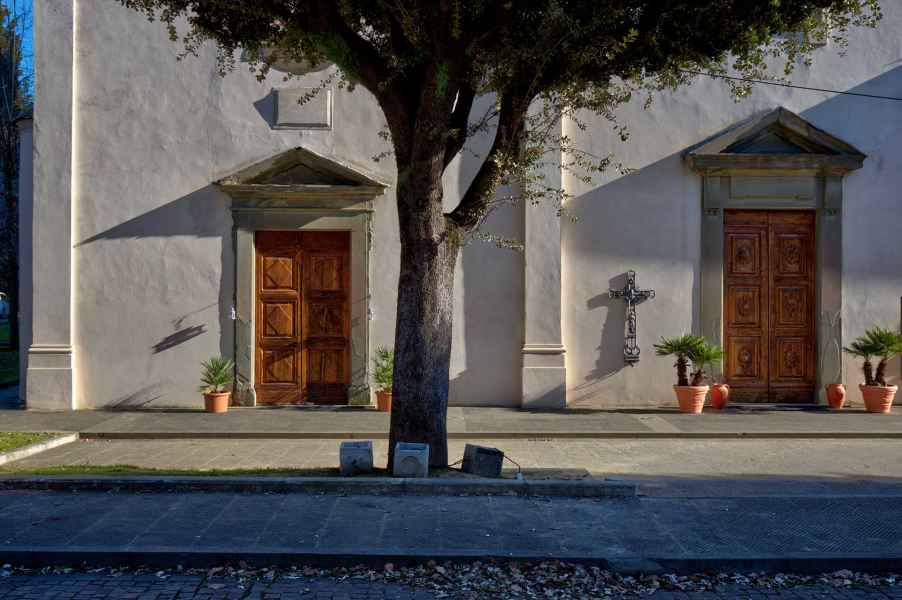