The Exhibition Center is located in Piazza C. Battisti, in the historic headquarters of the Società dei Canottieri di Limite (Society of the Oarsman of Limite), established in 1861. The museum was born from within the Society itself, in order to preserve the documents representing the memory and history of the traditional art of the ferryman-nautical hull worker, an activity flourishing centuries ago in this highly particular corner of the River Arno, and which has also continued to our present day. Since the early Middle Ages, the people of Limite sull’Arno were involved in construction of river vessels, primarily used for transport of goods from ports of the Tyrrhenian Sea (Pisa and Livorno).

The Limite ferrymen and Leonardo

The town of Limite has ancient origins, but saw its major development after the 15th century, when its optimal position made it one of the places where the activity of boat builders could best be established, toward use for commercial purposes, especially for transport of goods and raw materials along the navigable stretch of the river, that is, the stretch downstream of La Gonfolina, on to the ports of the Tyrrhenian Sea. Limite sull’Arno overlooked one of the wide meanders of the Arno, which due to the particular, local absence of currents, tended to widen in that spot, producing an expense of water ideal for the construction of navigational hulls on the site. The raw material, wood, was supplied by inhabitants of the communities situated a little further upstream, like the castle of Castra and the villa of Conio, who had access to the woods of Montalbano. When Leonardo depicted this stretch of the Arno in his numerous papers, he rendered perfectly the shape of the meanders generated by the slow course of the river after La Gonfolina, between Limite and the Empolese plain (Madrid II, f. 22v-23r; Windsor Castle RL 12685 ). Leonardo’s drawings of the Arno Limitese, which date back to the early 16th century, are to be considered the last image of that particular river, which made possible the birth and development of the activity that, for the following centuries, characterized the hamlets of Limite and Castellina. Only a few decades later, in fact, during the second half of the century, the river was rectified through a major operation of reclamation, which radically changed its course, leaving on the ground, in front of Limite, the trace of the fossil meander, indicated by the toponym Arnovecchio. Today this area is a nature reserve making part of the Centro di Ricerca, Documentazione e Promozione del Padule di Fucecchio (nonprofit organization), where you can observe the flora and fauna typical of wetland marsh areas.

The exhibition center houses a series of documents and artifacts concerning the activity of shipbuilding over the last two centuries. Small-scale models of river boats that were manufactured at the Limite worksites and a collection of original work tools are on exhibit, including the typical calafato (caulker) shirts, instruments for working the barchetti (small boats, barges), planes, saws. One may also consult dozens of archival documents and iconographic sources, such as vintage photos of naval artefacts, work-site phases, and landscapes of the Arno Limitese and its inhabitants, as well as drawings of boat projects, advertising leaflets for shipyards dating back to the 1930s, and much more.

Near Empoli, the River Arno ran dry in 1981, exceptionally, bringing to light the wreck of a river ferry that was extraordinarily well preserved, and very similar to the one drawn by Leonardo on one of the folios of the Codex Atlanticus (f.27r). The objects of the wreck, including a jug of archaic majolica, date the shipwreck to the first half of the 14th century. The wreck was probably caused by the 1333 flooding of the Arno. The river ferry also had a caulker’s ax for on-site preparation of the keel and a steelyard balance, indicating the vessel’s function of transporting goods. The finds, with the scale reconstruction of the Empoli wreck, are on display in the archaeological section of the Museo Civico di Fucecchio.
Texts by
Silvia Leporatti / English translation by John Venerella
Related resources
Related places
External links
Gallery 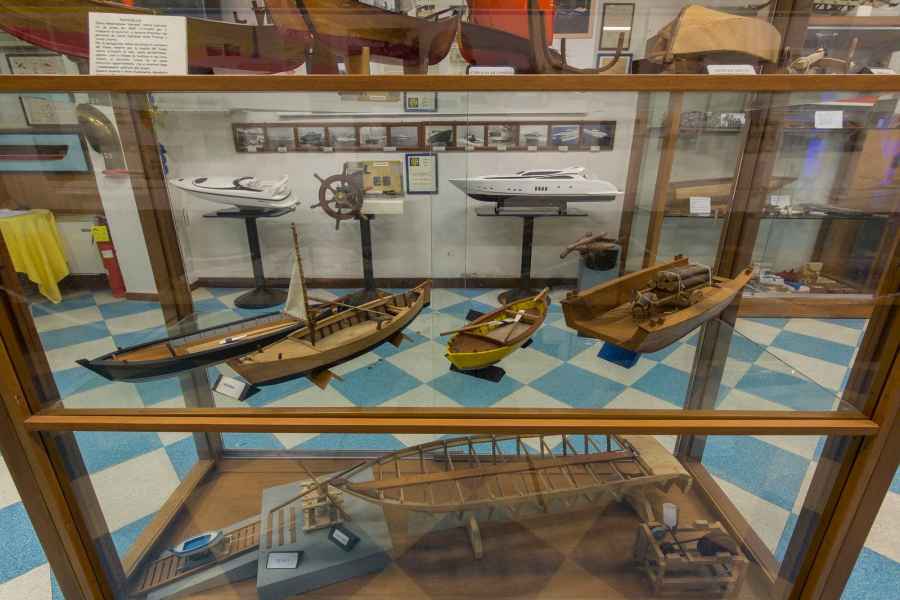 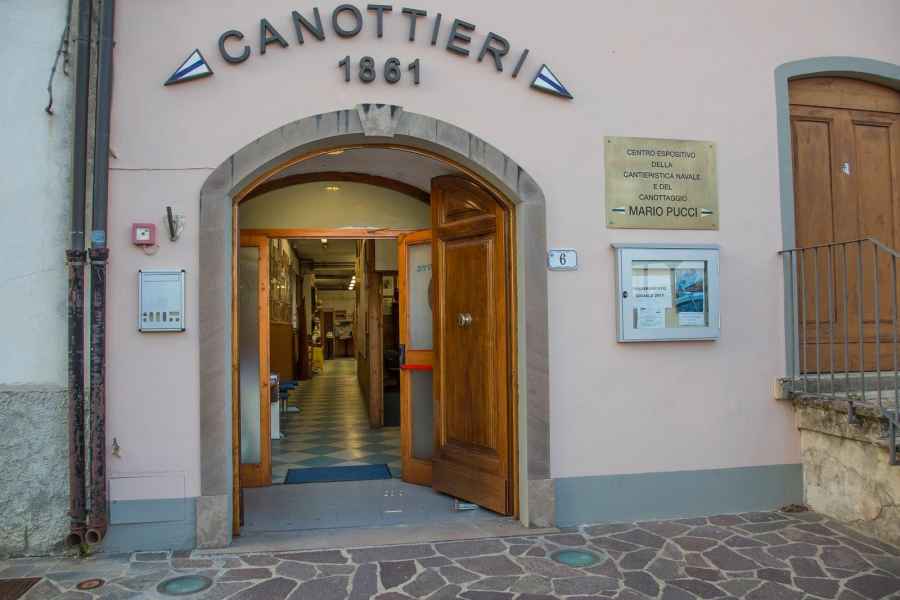 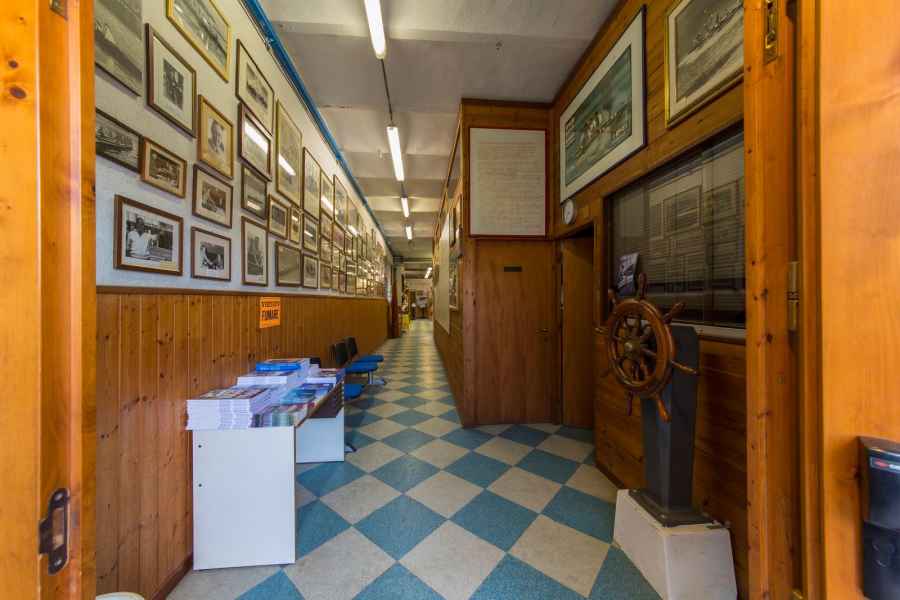 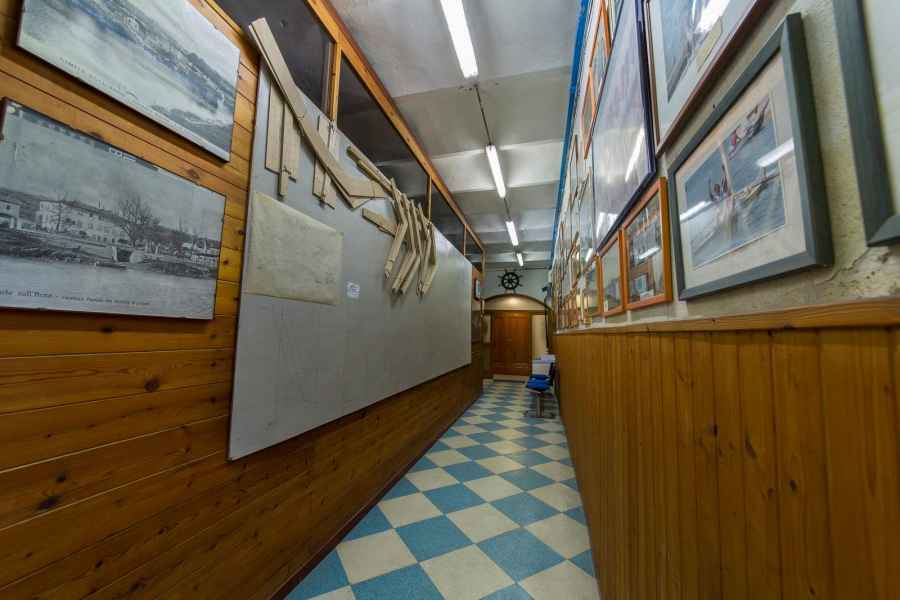