Vitolini is one of the hamlets on the southern slope of Montalbano, located on the elevation delimited by the high tributaries of the Streda and the Sant'Ansano stream. Since the Middle Ages the castle of Vitolini stood along the road descending toward the Arno Valley from the ridge of Montalbano, near the pass of Pietramarina, near Spicchio, in front of Empoli. Vitolini has been documented in the papers of the municipality of Pistoia since the beginning of the 13th century, the time when it belonged to the districtus of that city. Leonardo represented Vitolini in the bird's eye view of Windsor RL 12685. It is represented on the slopes of Montalbano, just above Vinci and Sant'Ansano, depicted as a village elongated in shape, surrounded by walls, with four corner towers.

Vitolini, the bishop of Pistoia and the bronze bell from the time of the podesta of Pistoia

The first written source mentioning Vitolini is a Pistoian document from 1132, the famous memorial of Bishop Ildebrando, which recalls, among the debtors of the bishopric, also a presbiter de Vitulini, certainly a cleric of the local church. The small community of Vitolini gathered around the church of San Pietro was spiritually dependent upon the parish church of Sant'Ansano in Greti, one of the most remote parish churches in the diocese of this city. The dependence of Vitolini upon Pistoia, which dates back to the time of the link with the bishopric of San Zeno, was also maintained in the following century, when Vitolini appeared in the list of rural communes of the districtus of Pistoia. In the Liber Censuum, the collection of the first documents of the municipality of Pistoia, the different paths are described by which it was possible to go from Pistoia to Vitorinum. We learn that in that year, 1224, an exceptional wave of precipitation had made the shortest route impracticable, that of Casalguidi toward the San Baronto pass, forcing municipal messengers to bypass the plain by climbing from Serravalle, to follow the road half-way along the southern side of Montalbano, up to Faltognano and then to Vitolini. At the end of the 13th century, in Vitolini, the presence of a podesta was provided for, as stated in the Pistoia statutes of 1284. Vittorino is also listed among the rural municipalities to which the city was to send an officer who was to perform judicial, administrative, and military functions (local police). The great bell of the church of Vitolini, bearing the date of 1285, is a magnificent memorial to the oldest history of this village of Montalbano. Civic bells at the time were an instrument that regulated the civil life of rural communities and were the very symbol of local identity. The names of its architects, Berardo magister Joannes de Pistorio, craftsmen from Pistoia, can also be read on the fine bronze artefact. Recent sector studies on the two 14th-century bell inscriptions seem to show that the artisans working on site for the production of the bells destined for rural communities generally came from the city, such as those of Vitolini. It is suggestive that the bell of Vitolini was made by magistri campanari of Pistoia only a year after the institution of the Pistoian podesta in Vitolini, as prescribed in the 13th-century statutes of that city.

The Florentine fortifications of Vitolini

Vitolini is never mentioned in the oldest written sources as a castle. Of its fortifications there is broad documentation beginning only from 1366, but the endowment of defensive structures must date back to the time when Vitolini definitively entered the orbit of Florence, which had long been pressing on the Valdarno border. In those years, as Villani narrates, the passage of militias encumbered the entire area of ​​Greti and, in particular, Vinci, Cerreto, and Vettolino (Vitolini). The agreements stipulated between Florence and Pistoia in 1329 temporarily put an end to the most acute war phase, but from that moment on, Vitolini with Carmignano, Artimino, Bacchereto, and Castellina iusta Arni definitively entered the Florentine contado. For decades even Florence had to deal with the perennial state of war of this border line. It is in this context that, in all probability, Vitolini was equipped with a defensive apparatus suitable for the defense of the population of such an unstable territory. Of the material structure of the castle we have variant information, from one of the periodic visits made by the Ufficiali delle castella in the Florentine territory. In 1366, a long reconnaissance also involved the castle of Vitolini, which was the subject of a revision of the defensive apparatus. The walls followed the curving line pattern of the elevation and were equipped with battlements and wooden protruding apparatuses. They had two gateways, one on the east side and one on the west, mentioned in the 14th-century statutes, respectively, as Porta a Baccigno and Porta del Sole. From the western gate started the road to Vinci and Faltognano, while the eastern one led to San Giusto, from where one could go down on the other side of Montalbano. Some sections of the curtain wall had been occupied on the inside by houses built abutting with the wall, so that the officers had ordered they be equipped with walkways and brattices so as to ensure continuity of the defensive function of the wall against which they were supported. The statutes testify to the existence of a village underneath the embankments of the castle, also surrounded by walls. The church of San Pietro and a platea superior were most probably the market square, today's Piazza Mazzinghi, where until the last century there was a square-shaped tower. This new fortress of the defensive system of the Florentine border, as the 1366 report well explains, worked not only as a reference point for the inhabitants of the castle surroundings, but also for the communities of Santa Maria a Collegonzi, San Bartolomeo a Sovigliana, and San Donato in Greti. These three communities had to participate regularly in guard duty and contribute to expenses of the castle of Vitolini, which therefore functioned exactly as a castle-shelter for a large part of the population of Greti.

The Vitolini castle in the time of Leonardo

When Leonardo depicted Vitolini on the famous bird's eye view of the Windsor Castle Collection (RL 12685), he drew a turreted castle surrounded by walls, elongated, with four towers. The shape given Vitolini by Leonardo is the one that the new Florentine castle-shelter had taken on around the mid-14th century, and which it was still to maintain in the time of Leonardo. A sketch of the castle, rich with details, is also present in the map of the Capitani di Parte Guelfa from the last quarter of the 16th century. The linear layout map can be read very well with the two vaulted openings on the opposite, long sides, the Porta a Baccigno in the foreground, on the west side, and the Porta del Sole, incorporated in the closely built houses on the east side. The only tower marked on this map is the one that stood along the walls on the short southern side, at the point of the turriform building of Corte della Torretta (Caparrini house). At this point the road descending toward the Arno started. Vitolini, as depicted by Leonardo at the beginning of the 16th century on the map RL 12685, probably remains the image that best represented the castle-refuge desired by Florence, a fortress well equipped with the defense system of the Greti area.

The church of San Pietro a Vitolini

The church and community of San Pietro a Vitolini, which probably depended, since the twelfth century, upon the parish church of Greti, exists today in late form, due to late 18th-century transformations and the restoration of 1940. The current building has a single nave, on a rectangular layout. The facade with a gable roof is completely plastered and burdened by the construction of a loggia space above the entrance portal built in the 16th century. The simple hall has a raised presbyterial part that takes light from three single-lancet windows with stained glass. Starting from the 17th century, the liturgical furnishings had been enriched by numerous altars. In total there were six, dedicated to Saint Lucia, St. Francis, St. Thomas, as well as to the titular saint, St. Peter, the Virgin, and the Visitation. Following the restoration of the last century, there are only the altar to the right, dedicated to the Virgin Mary, in pietra serena and dated 1754, the high altar, from 1756, dedicated to St. Peter, and the altar on the left, dedicated to the Visitation, on which since 1631 an altarpiece depicting the Disbelief of St. Thomas has been placed. On the outside of the church is the bell tower, rebuilt at the end of the 18th century. The bronze bell, made by the Pistoian magistri, is dated 1285.
Texts by
Silvia Leporatti / English translation by John Venerella
Related resources
Related places
Gallery 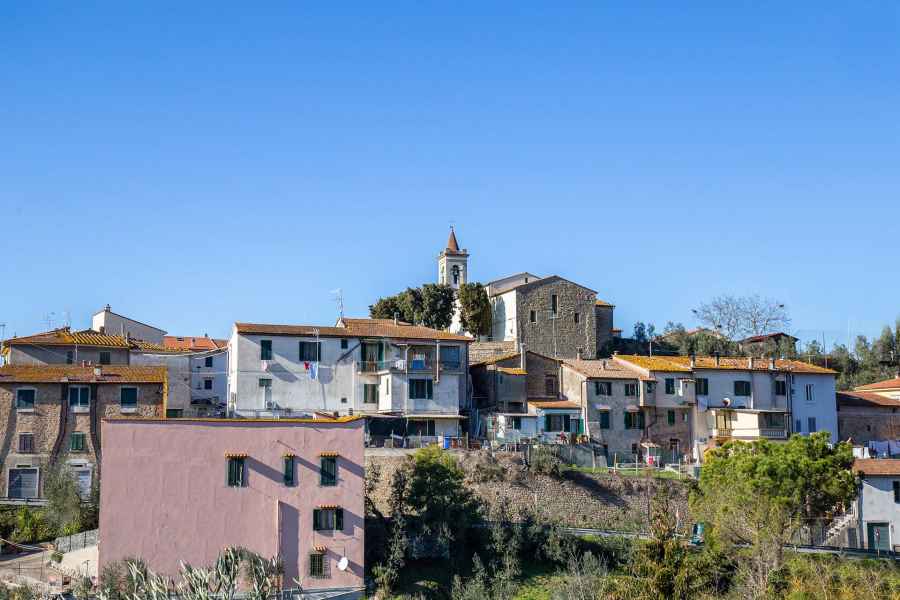 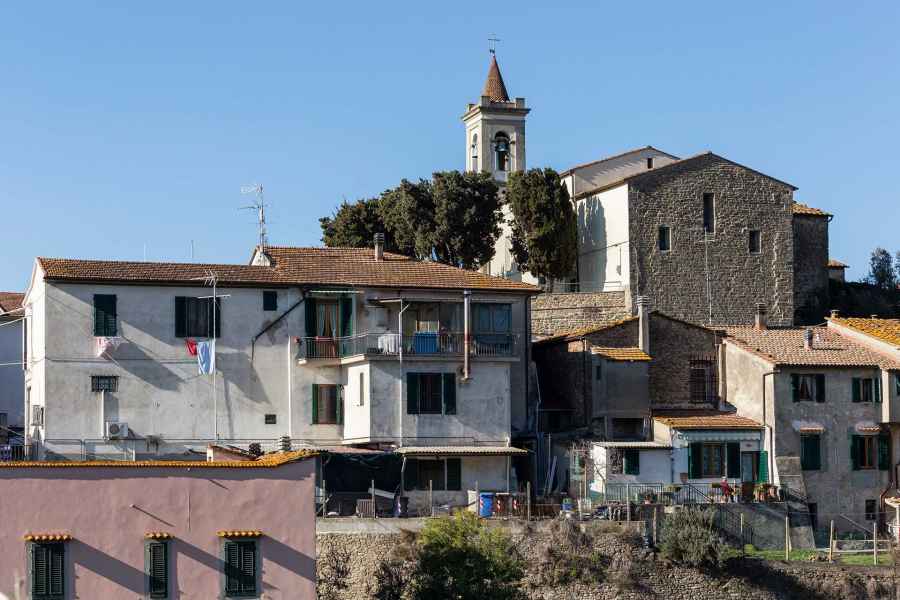