The village drawn by Leonardo and indicated with the toponym Collegonzi is situated, on map RL 12685 of Windsor, just south of the Montalbano slopes hosting the castles of Vinci and Vitolini, a short distance from one of the deep bends of the Arno. This is the ancient castle of Collegonzi, which belonged, like the neighboring Valdarno castles of Vinci, Cerreto, and Orbignano, to the powerful house of the Counts Guidi. Leonardo knew very well this part of Montalbano, where he had been able to observe the geological deposits of marine origin and the fossil shells—the "nichi"—with which he would deal at length in the Codex Leicester.

The origins: the castle of the Counts Guidi

The earliest mention of Collegonzi dates back to 1164. The reporting document is the diploma listing the assets confirmed by Emperor Frederick I to Count Guido VII Guerra of the powerful Guidi family. Among the numerous castles of the Lower Valdarno, Collegonçoli is mentioned. This castle was part of a vast system of fortified villages that dotted the southern slopes of Montalbano. In fact, the Counts Guidi were present in this area from at least the previous century. At the end of the 11th century they already owned in partibus Greti—thus was the southern side of Montalbano formerly called—the castles of Larciano, Cerreto, and Vinci, while at the beginning of the following century they also acquired Massarella, Musignano, and Colle di Pietra. On the other side of the Arno, in addition to promoting the re-founding of the castle of Empoli, they had also acquired Monterappoli and Granaiolo. This system of castles situated on the two sides of the Arno controlled the series of waterways and land that intertwined in this area. The castle of Collegonzi, in a strategic position, must have been well fortified, defended by a boundary wall with moat and ditch around: circumdata sunt aut ripis aut muris aut foveis. Inside the walls, must also have been the castle church of Sancte Marie de Collegonçi. This was the aspect of Collegonzi in the mid-13th century. The description of the inhabited area, of the church, and of the castle defenses dates back to the well-known 1254 deed of sale, by which the Counts Guidi ceded a large part of their possessions in partibus Greti to Florence.

In the mid-13th century, the castle of Collegonzi was involved in the crisis that had invested the house of the Counts Guidi. The city, taking advantage of the economic and dynastic difficulties faced by some of the most powerful families in the area, obtained control through the acquisition of large shares of possession. The Counts Guidi managed to sell to Florence all shares due to them from many of the castles of Montalbano, including the castle and the church de Collegonçi, in addition to rights over men and over the principle routes of communication. At the beginning of the 14th century, the small castle definitively entered the regime of Florentine administration. According to a provision of the Municipality of Florence dated 1331, the community of Collegonzi had to work, together with those of Empoli, Cerreto, and Vinci, on the maintenance of a road that led from the Empoli market to the Greti area. This road must have passed through the territorial districts of those communities, and each had the obligation of keeping its part in good condition. Rural municipalities, in fact, were required to manage principle peripheral infrastructures on behalf of the municipality of Florence. Both the roads and the fortifications of this area had, at that time, a strategic function of considerable importance, since they were often the theater of war that saw Florence opposed to Lucca.

Collegonzi in the time of Leonardo

During the entire 14th century, the area of Greti was a theater of war. Collegonzi functioned, at the time, under Florence, as a fortress-shelter for the countryside population during the periods rendered insecure by the passage of armed groups of men. In those years, the militia in the retinue of forces of Lucca traveled the entire Valdarno. They penetrated into Valdinievole and reached the area of ​​Greti, where in 1315 they even attacked the castle of Collegonzi, which was burned to the ground. Its defenses during these events suffered serious damage, and it is probable they were never restored. It was in fact La Dominante, Florence, which for strategic reasons, decided on a case by case basis what were the strong points to maintain in effective utility, and which, by contrast, had become counterproductive in the holding. In the recognition of the Florentine officers of the Castle of 1366, in fact, Collegonzi is not mentioned among the sites visited and affected by restoration works to defensive apparatus. The small village of Collegonzi that Leonardo draws in his famous bird's eye view map RL 12685 of Windsor, in fact, appears as a cluster of buildings that, by contrast with the neighboring villages, does not appear to be surrounded by walls. It is probable that by the time of Leonardo, Collegonzi was a completely open village. Of the ancient walls of the Guidi castle of Collegonzi, probably destroyed during the war between Lucca and Florence, no visible traces remain in the current residential area. The church of Santa Maria a Collegonzi is preserved in late forms, dating back to the 17th-18th centuries.

The da Vinci family had no properties in the area of Collegonzi, but Leonardo possessed an excellent knowledge of this part of Montalbano. This is demonstrated by his observations on the origin of the geological stratifications of the gorge of La Gonfolina and his extensive reflections on the presence of fossils of marine origin in the vicinity of the Collegonzi, the famous "nichi" (fossil shells) recalled in the Leonardo codices. The broad passages dedicated to the subject, concentrated on various folios of the Codex Leicester, revolve substantially around the theory that the different geological layers he observed in the Arno Valley were due to the action of the ancient sea that, in most remote eras, reached La Golfolina, where it received the waters of the Arno. According to Leonardo, the movement of the sea waters shaped the lithic material that the rivers discharged into the ancient sea, giving rise to geological layers of different composition, from coarsest to finest: the "ghiara minuta" (minute gravel), the "rena" (sand), and finally the "fango" (mud). The retreating of the waters of the Pliocene sea must have placed the coarser and heavier deposits along the ancient shores further upstream, and the finer and lighter ones, along the banks further downstream. Leonardo observed and explained in this way the presence of "sassi grandissimi” (very large stones) and "ghiara" (gravel) around Montelupo and Capraia, the "rena" (sand), even finer, toward Castelfiorentino, and finally the "fango" (mud), the finest and lightest, at Collegonzi (Codex Leicester, ff. 6A-31v; 8B-8v). And here is the point of insertion of Leonardo’s theory of the "nichi" of Collegonzi, the fossil shells he saw in great quantity within the "mud" deposits, that is, the thinner geological layers that once formed the bottom of the Pliocene sea. The rising of the sea floor, followed by its subsequent drainage, had, for Leonardo, given rise to that particular formation composed of alternating layers of bluish mud and "nichi," which he had especially observed around Collegonzi. Leonardo writes: "the mud, in which the shells lived, which rose gradually by degrees, in accordance as the floods of the turbid Arno poured into that sea, from time to time raising the bottom of the sea, which by degrees produced these shells, as is shown in the cut bank at Colle Gonzoli [...]" (Codex Leicester, ff. 8B-8v). At the foot of Collegonzi the erosive action of the Arno must have exposed, according to him, a geological section, the "cut bank of Colle Gonzi, which bank is undone by the River Arno, which consumes at its base: within which cut bank you may clearly see the aforesaid degrees of shells in bluish mud, and there may be found various things from the sea [...] "(Codex Leicester, ff. 8B-8v). Up until a few years ago, there was a clay quarry at Collegonzi, with the Pliocene stratification containing the levels of seashells representing the coastal marine environment observed and described by Leonardo.
Texts by
Silvia Leporatti / English translation by John Venerella
Related resources
Related places
Gallery 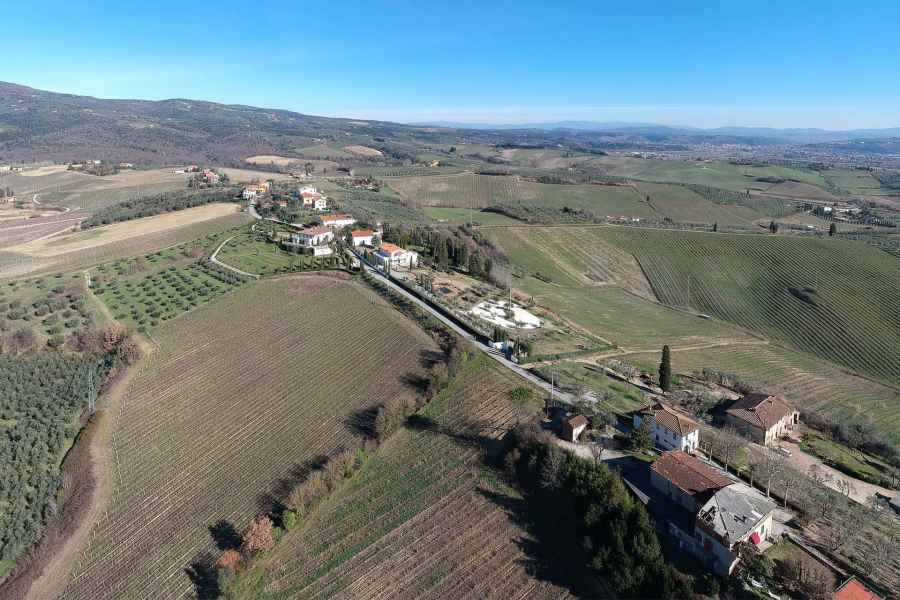 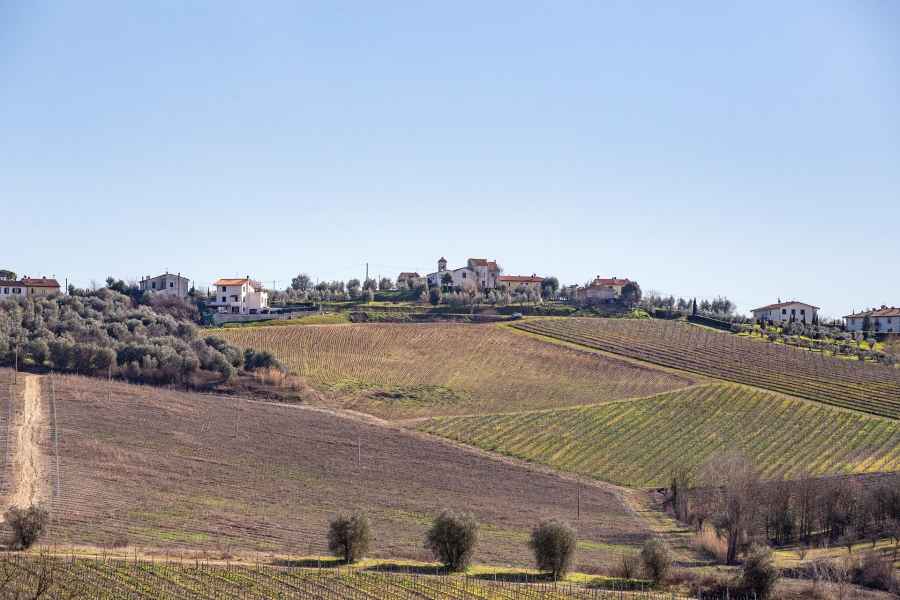 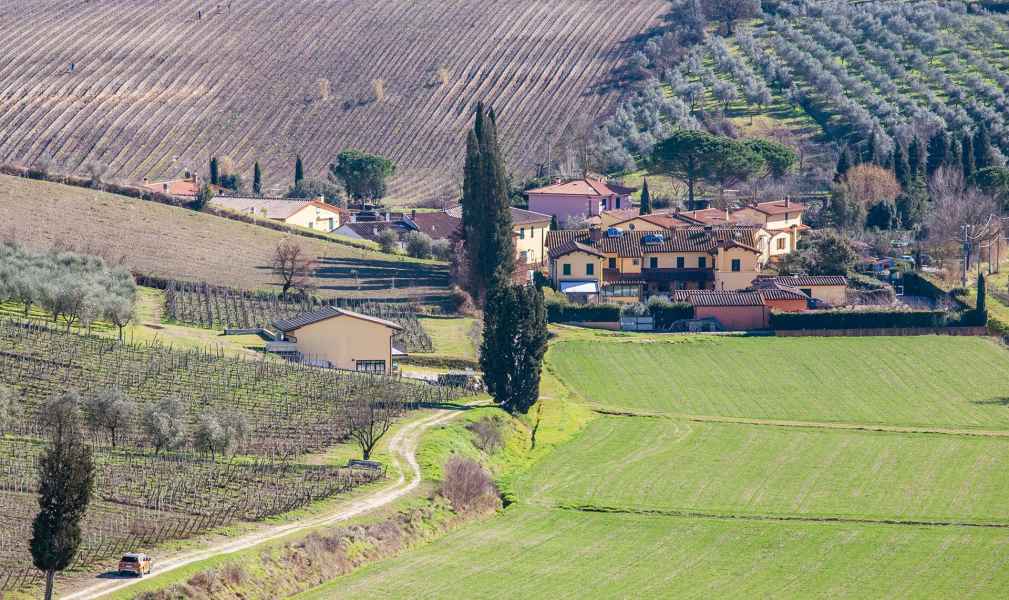 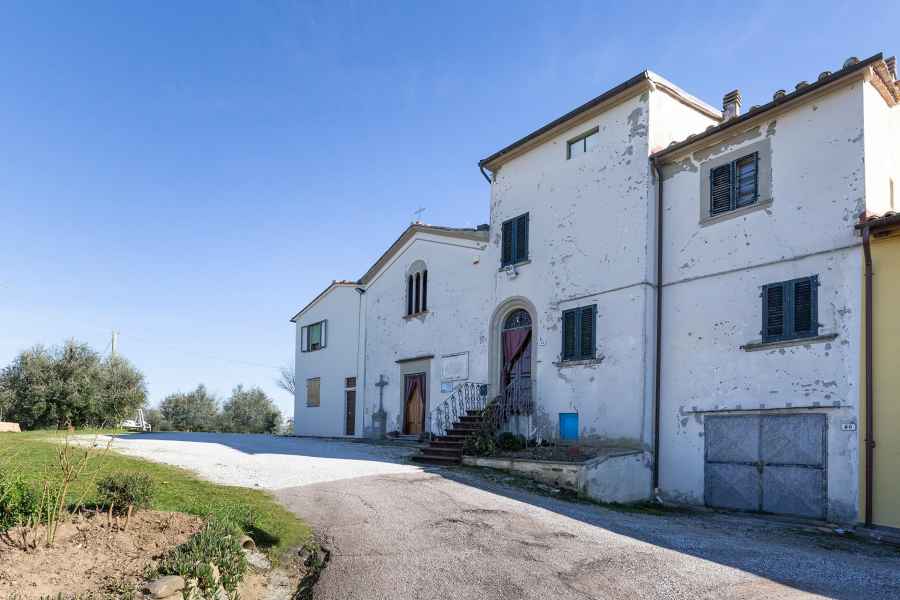 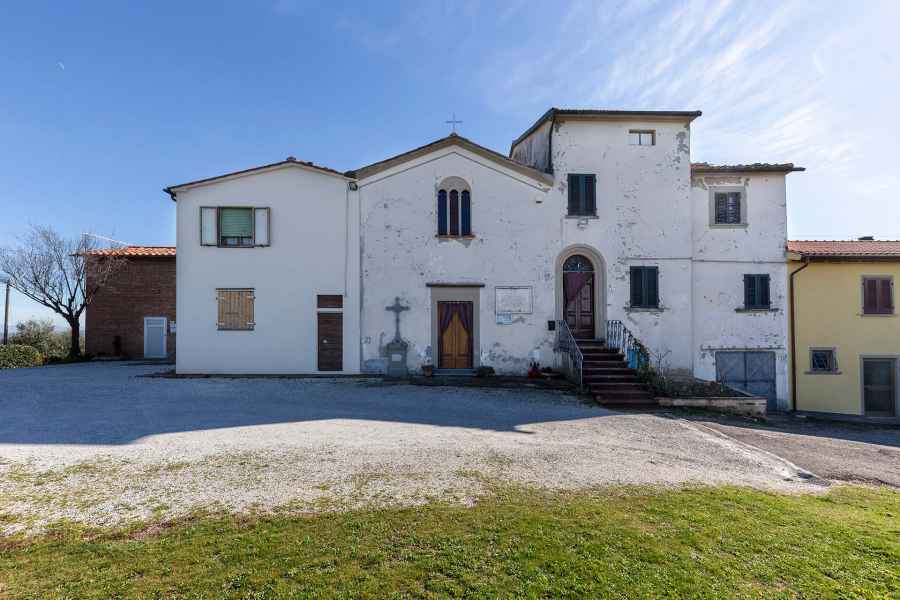 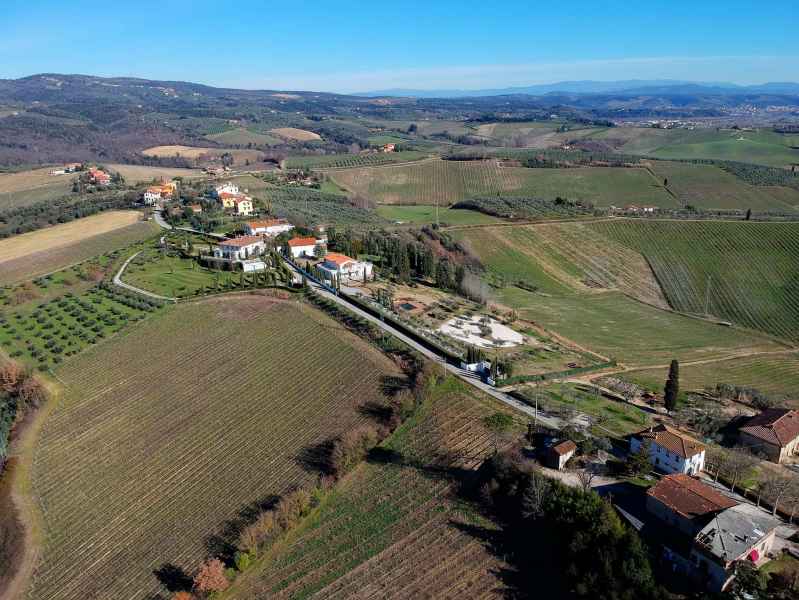 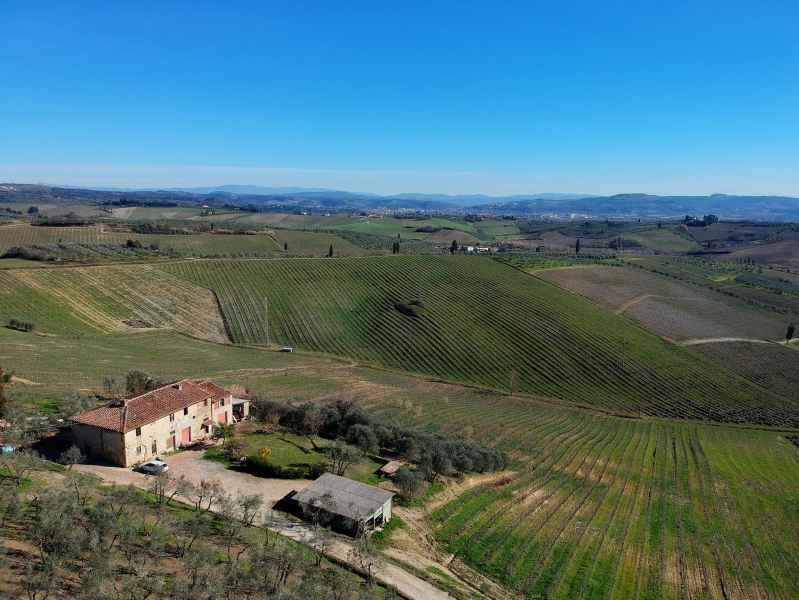 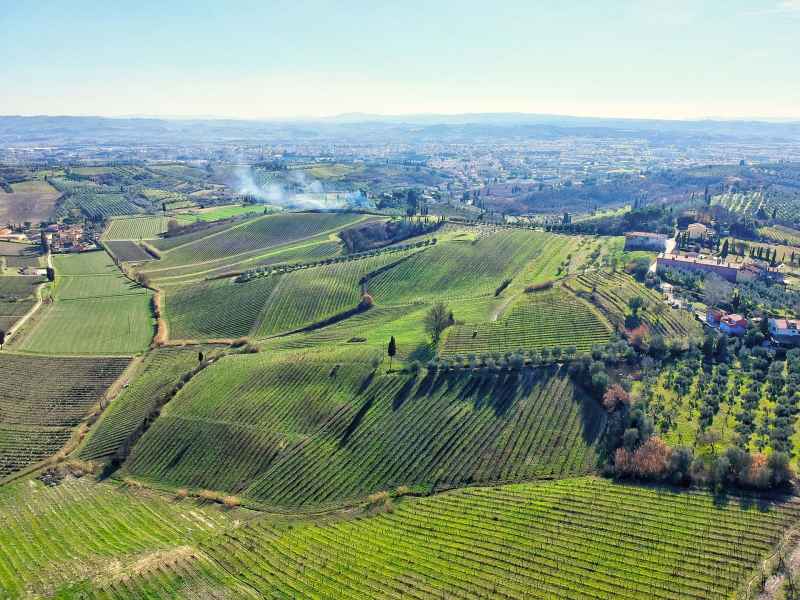