The Barco Reale and the Barchetto della Pineta

Among the Medici hunting reserves, that of Barco Reale is one of the largest and most complete for number and quality of infrastructures (gates, sluices, portals). It was completed in 1626, and its wall, only two meters high, passed over gorges and very rugged slopes, thus enclosing the entire ridge of Montalbano. The 19th to 20th century historiography is rather vague about its location, because it was so vast that the exact course of the wall circuit was not known. For example, it was thought that the monumental gate of Poggio alla Malva was one of the accesses to the Barco Reale, when actually it was the entrance to the so-called Barchetto della Pineta, a small hunting reserve located on Poggio alla Malva, near Artimino, which was built almost a century before the Barco Reale. Today through the study of 18th-century maps and direct observation, we know the exact course of the wall of the great Medici hunting reserve, 52 kilometers, calculating an extension of fully 4000 hectares. Some surviving tracts of the wall, sometimes also in correspondence with locks and sluices, can now be visited.

A remarkable 18th-century map of the Royal Possessions conserved in the State Archives of Florence represents a bird's eye view of the Barco Reale taken from the bend of the Arno. It is one of the rare iconographic sources that fully report the perimeter of the boundary wall, with all its gates, counting at least sixteen. The main road was given by the ridge road that, from Artimino, passes San Martino in Campo, San Giusto, and then the tower of Sant'Alluccio, which Leonardo drew before it was included within the Medici estate, in the famous view of Montalbano RL 12685 of Windsor. Under the tower of Sant'Alluccio we can see a stream that descends on the Vinci side: it is certainly the Rio di Balenaia that fed the mills of Vallebuia, many of which must have existed back in the time of Leonardo. Tracing along the Balenaia gorge, along the so-called Via dei Mulini, we reach a preserved section of the wall of the Barco Reale, beyond which there are two mills fed by the same watercourse. When the wall, about two meters high, intercepted a stream of water, passing over it, it was necessary to create a lock, an opening equipped with a metal grid that allowed the flow of water, but prevented the exit of any big game through the reserve wall. An example of this type of construction can be seen just above Sant'Amato, nearby a preserved section of the Barco Reale wall, reachable from path 16 B of the "map of hiking trails" of the municipality of Vinci. Some surviving portions of the Barco Mediceo wall can be seen just above Bacchereto, near Pietramarina, in the locality Fornia, a toponym depicted by Leonardo in the famous Montalbano view of the double folio Madrid II 22v-23r, reachable from path 300 of the "map of hiking trails" of the municipality of Vinci.

The 18th-century map of the Barco Reale also shows the so-called Barchetto della Pineta, the small hunting reserve built back in the mid-16th century near the villa of Artimino. The Barchetto della Pineta, also referred to as Barchetto dei Daini neri, included a part of Poggio alla Malva, the small hill overlooking the Arno where, even today, we can admire the original access to the reserve, the Porta della Pineta. As Targioni Tozzetti tells us: "The pine woods is a separate Barco and it runs for two miles. The domestic pines are only in the Barco or Barchetto de’ Daini neri." This observation on the exclusive presence of the domestic pine in Poggio alla Malva recalls a little-known folio of Leonardo that depicts, in fact, this short stretch of the Arno (Madrid II, f.15r). It is a sketch in red chalk that reproduces the particular profile of the right bank of the Arno, downstream from La Gonfolina, where we can clearly see the promontory of Poggio alla Malva, indicated with the toponym Pini, while underneath, we can read Brucianesi. The profile of the bank continues curvilinear to the rocky cliff of Capraia. Thus, Poggio alla Malva, where in the mid-16th century the small Medici reserve of the "Barchetto" would have stood, was already known to Leonardo, with the name of Pini. The area between La Gonfolina gorge, Capraia and Montelupo had long been observed by Leonardo, who had noted in the folios of the Codex Leicester the geomorphological peculiarities of the place:  the famous "ghiare" (gravel beds) and the traces of the ancient Pliocene lake.
Texts by
Silvia Leporatti / English translation by John Venerella
Related resources
Related places
External links
Gallery 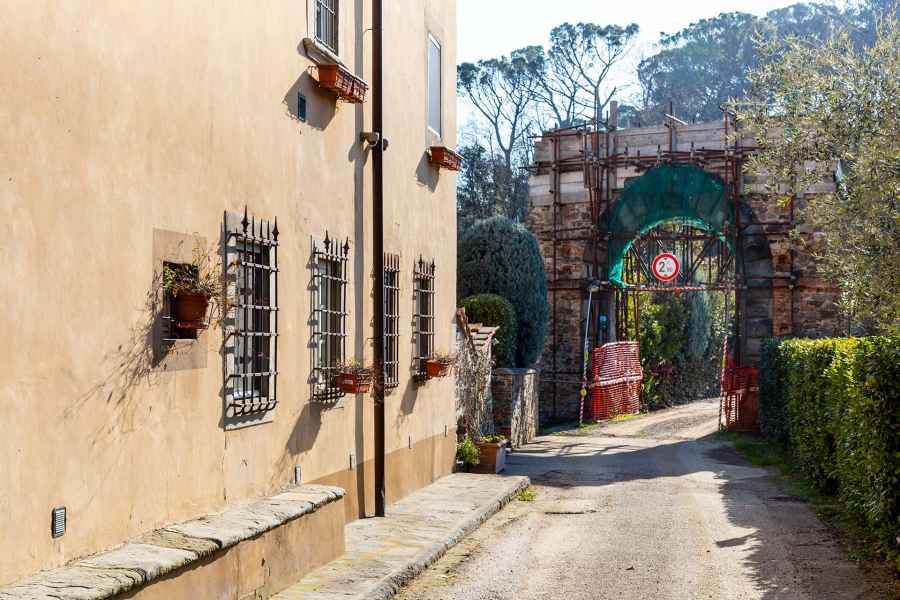 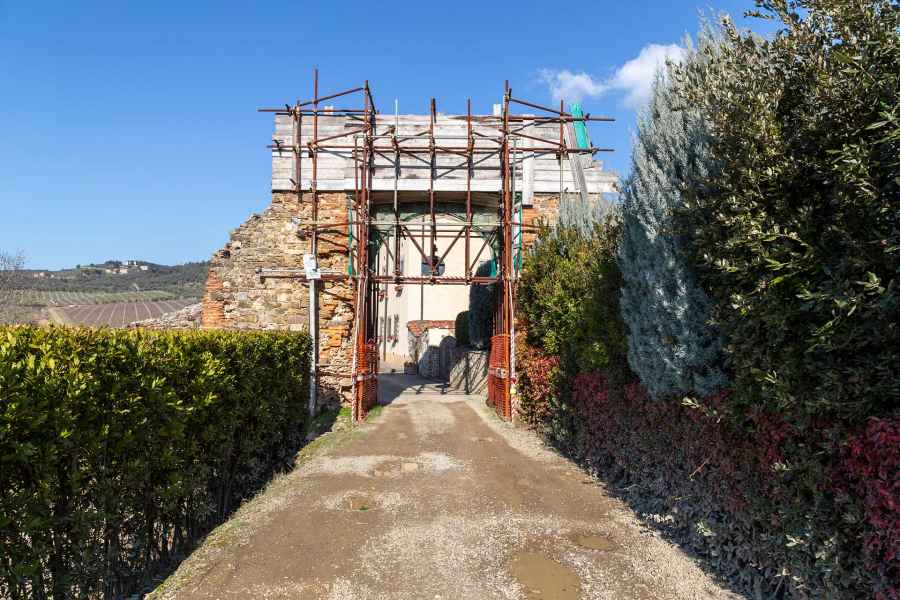 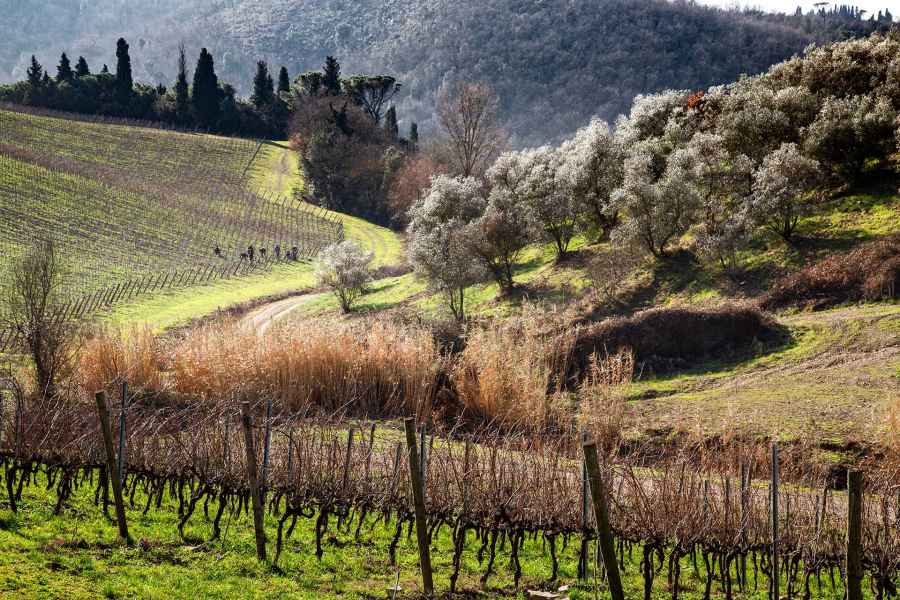 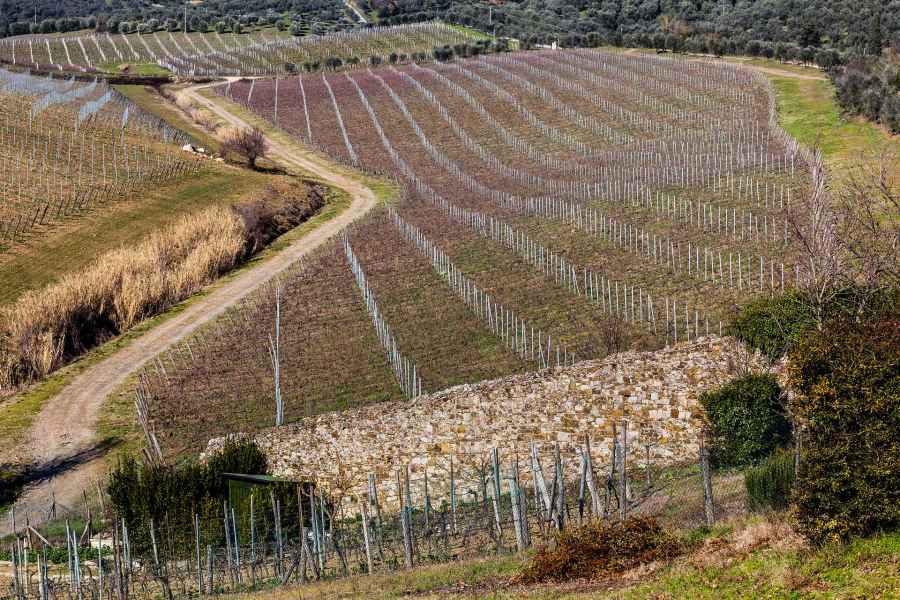 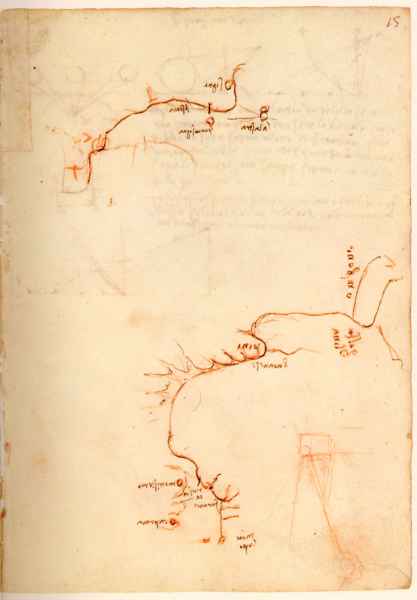