During the Middle Ages, the Torre di Sant'Alluccio dominated the ridge of Montalbano on the point where the road from Vinci passed over to the opposite slope, to continue in the direction of Bacchereto. At its base are the sources of the acqua santa, the watercourse that continues downstream under the name of Rio di Balenaia and then Vincio. Its history is closely linked to that of the ancient hospital of the Counts Guidi, which was near the gorge of Balenaia, as recent and fortuitous archaeological finds would seem to demonstrate. At the time of Leonardo, who represented it on Montalbano on the map RLW 12685, it probably belonged to the Florentine family of the Ridolfi. Currently the tower, incorporated into the building complex that belonged to the Counts Spalletti, is situated inside the Barco Reale, but appears to be very poorly conserved. The site of the Torre di Sant'Alluccio is included among the itineraries of the municipality of Vinci’s "Hiking Trails Map" (14-A and 300).

The Torre di Sant'Alluccio and the hospital of the Counts Guidi

The complex of Sant'Alluccio, with its stately building and rural annexes, today in a state of ruin, was once part of the countryside estate of Count Spalletti di Lucciano (Quarrata). The tower, still recognizable as part of the noble complex, is traditionally associated with the site of the ancient spedale (hospital) of Sant'Alluccio, which supposedly was founded by the hospital priest of Lucca, Alluccio da Pescia, who lived between the 11th and 12th centuries. Sant'Alluccio was the founder of the hospital of Campugliano in Valdinievole, and from the hagiographic text of Vita Alluccii, we learn that the same saint was responsible for founding a series of reception centers that would be situated, according to traditional historiography, in the territory of Vinci, around the "Torre di Sant'Alluccio" of Montalbano. In reality this tower is attested to for the first time in documents from a rather late period, at the beginning of the 14th century. The "tower" was mentioned in an inventory of the properties of the municipality of Pistoia (Liber Censuum Comunis Pistorii) associated with a church dedicated to Sant'Alluccio: "ecclesia que vocatur Santalluccio cum turri sita in podio Montis Albani". The church and the tower belonged to the parish of Bacchereto, in the diocese of Pistoia, and on the ridge of Montalbano marked the border between the contado of Pistoia and that of Florence. Regarding a hospital, we have information from the mid-13th century through a series of well-known documents that link this foundation to the family of the Counts Guidi, by then already lords of the castles of Cerreto and Vinci. In 1254 the Counts Guidi ceded to Florence a large part of their possessions in partibus Greti, explicitly mentioning, together with the castle and church of Vinci, the "ecclesia sive hospitalis Sancti Allucii" with all the appurtenances. Among these are listed a hospital house and a woods (nemus) that, on the basis of the names of the places mentioned in the document, would be situated just below the Torre di Sant'Alluccio. The same document would also seem to suggest that the hospital had had another title (San Giovanni) in more ancient times, and that its dedication to Sant'Alluccio came about later. In fact, the document cites the "hospitale sancti Iohannis quod vocatur Sanctum Alluccum" in its list of the boundaries of the diocese of the castle of Vinci.

The remains of the ancient Guidi hospital in Vallebuia

In the Balenaia gorge, currently covered by woods, the foundations of several buildings have recently been found, showing the trace of a road axis and dating, based on the surface ceramic material, to the High Middle Ages. The small settlement of Vallebuia may actually have been part of the appurtenances of the Guidi hospital of San Giovanni/Sant'Alluccio. Only an archaeological survey could provide precise indications; however it is clear that on the Montalbano ridge around Vinci there existed a reception structure during the High Middle Ages used by those crossing the pass toward Bacchereto and Pistoia, certainly controlled by the Counts Guidi.

Of the 14th-century church of Sant'Alluccio with which the tower was associated, as described in the inventory of the municipality of Pistoia, there does not appear to be any trace in the late 16th-century maps of the Capitani di Parte Guelfa. In fact, in many maps, only the tower is represented, without any church. The indication that is usually associated with the drawing, torre di sancto alluccio, leaves no doubt about the identity of the building, the same turriform building we see today as a ruin in the 19th-century complex of the Counts Spalletti. Thus already in the 16th century, on the ridge of Montalbano around Vinci, there remained only the tower from the old complex of Sant'Alluccio to indicate the ancient border that had, by this point, become merely the limit between different administrations. The tower drawn by the Capitani di Parte Guelfa, with its austere forms, interrupted only by narrow openings, seems to have the appearance it originally had. On one of the maps, next to the tower, we can read the name of the Ridolfi. This family of Florentine origin had many possessions in the area of ​​Vinci, including several mills powered by the Rio di Balenaia, the estate of Ferrale near Anchiano, and probably also the tower of Sant'Alluccio. Leonardo drew it in the map of the Lower Valdarno RLW 12685 (santa lucco), but placed it on Montalbano in an incorrect position. We can also observe that the Sant'Alluccio depicted by Leonardo displays, at the base of its tower, a lower structure that—due to its similarity with the drawing of San Giusto al Montalbano (on the same map), as a church with a bell tower—would suggest the intention to represent a church complex with a tower. Today only the tower remains from the ecclesiastical complex, the same tower that Leonardo could have observed by climbing up the road leading from Anchiano to Bacchereto. Through the parts of the current ruin that are now lacking plaster, you can still see part of the original wall of what was once the tower of the Ridolfi, at one time the bell tower of the church of Sant'Alluccio.
Texts by
Silvia Leporatti / English translation by John Venerella
Related resources
Related places
External links
Gallery 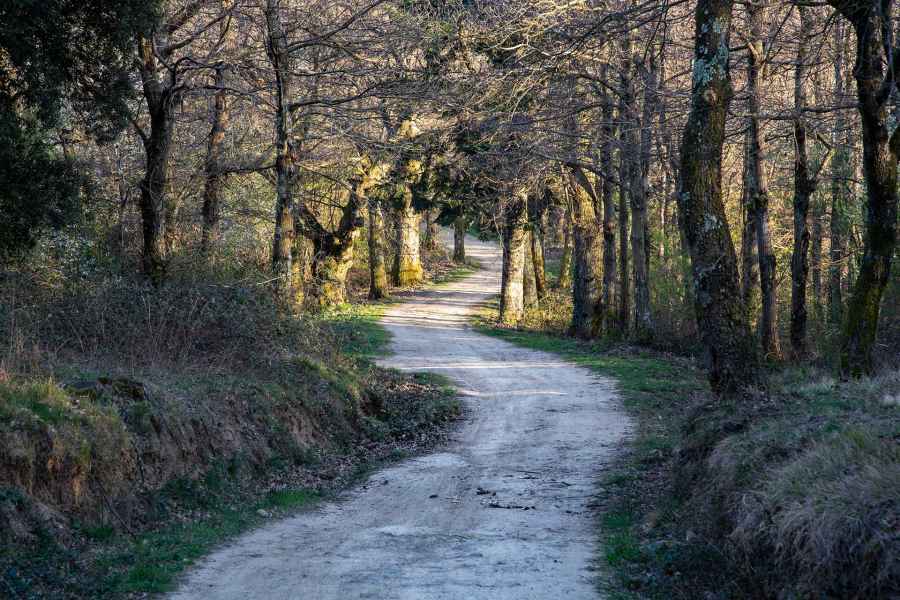 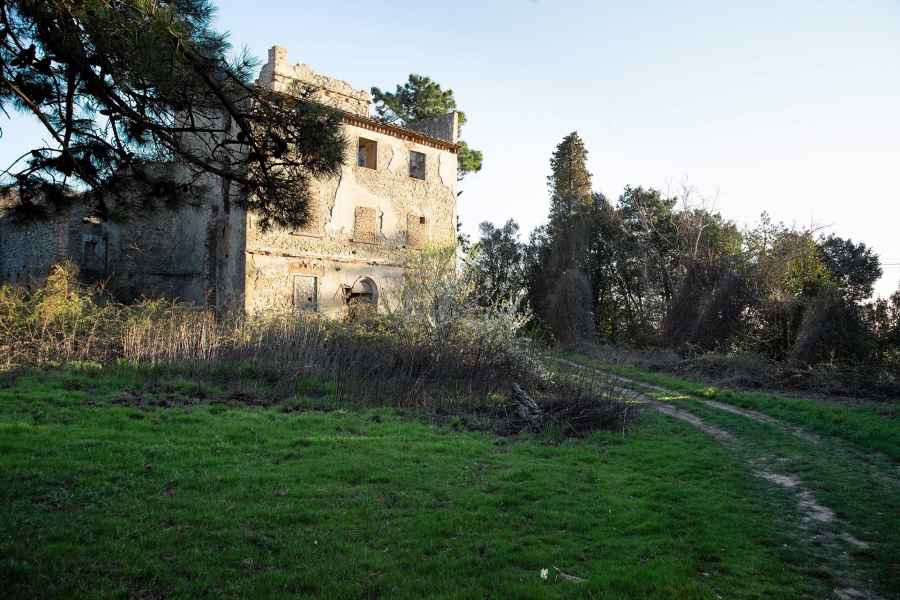 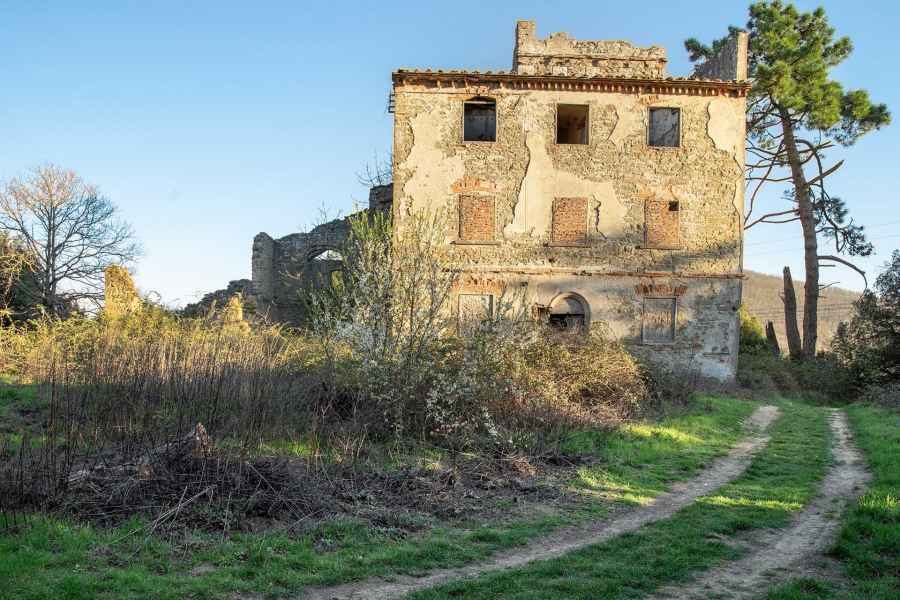 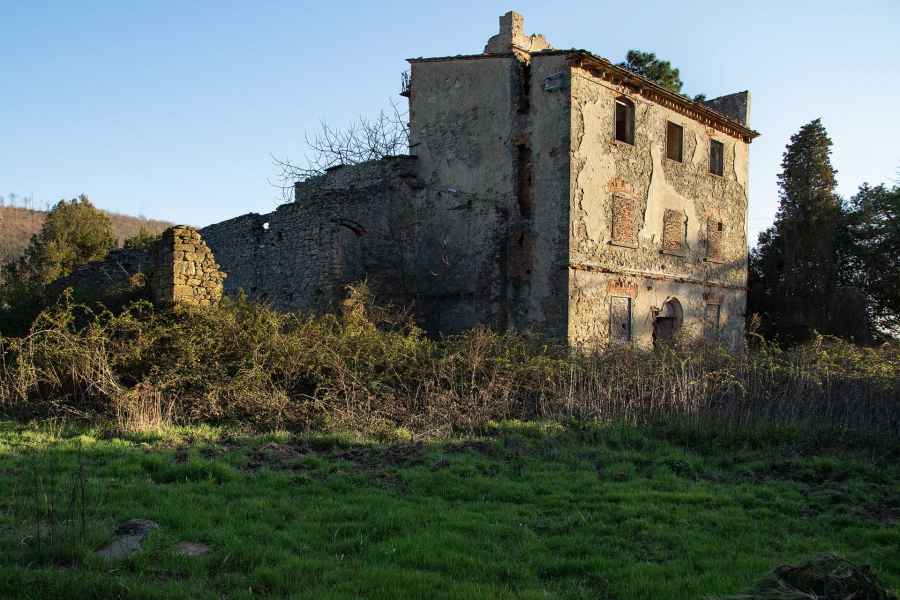 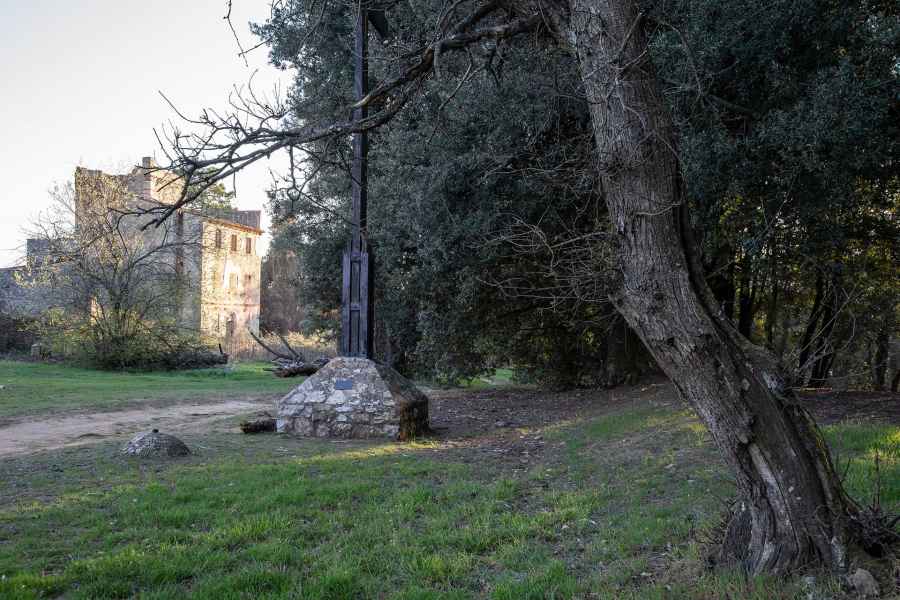 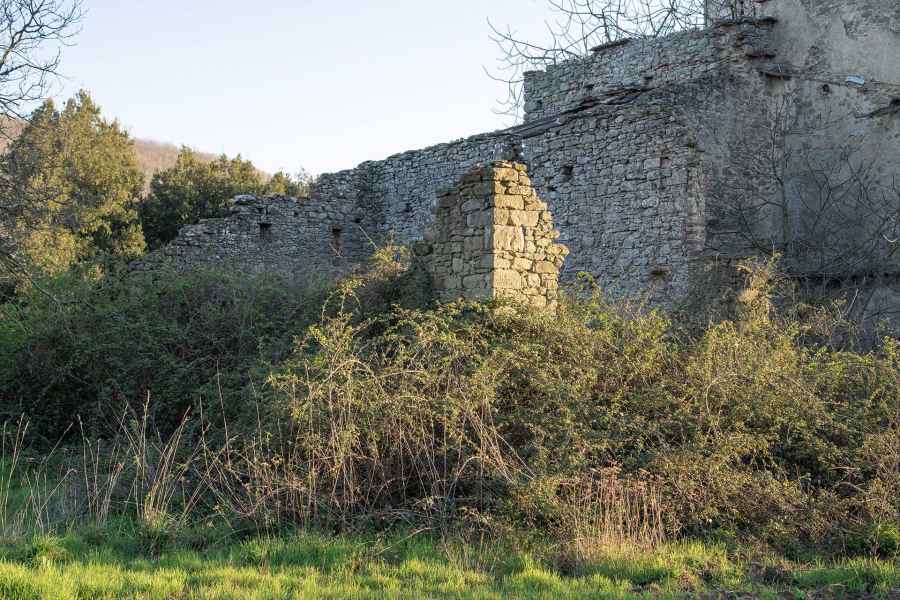 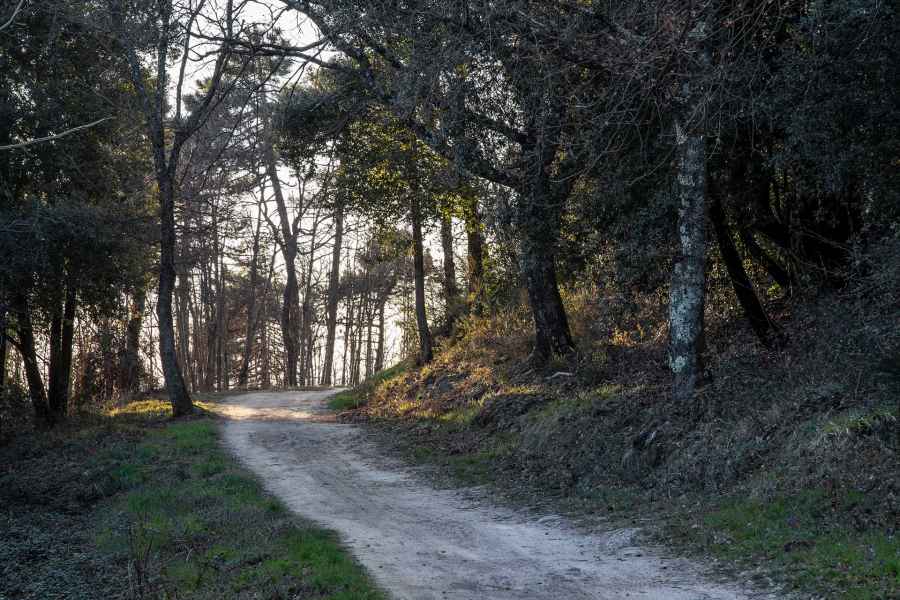