Pietramarina is the name of one of the highest peaks of Montalbano, straddling the slope of Faltognano-Vitolini and the opposite side, of Bacchereto-Verghereto. It is a naturalistic site due to the presence of hollies and centuries-old holm oak groves, but its history as a place of considerable strategic importance dates back to the Etruscan period. In this area, the remains of a settlement frequented from the 7th century BC have recently been brought to light; in the following centuries, this became a solid fortress built to control a vast territory. The origin of the name is still unclear; however, the place was indicated as such as early as Leonardo’s time: at the top of the 16th-century map of the Capitani di Parte Guelfa for the territory of Vitolini, we read, nearby the mountain pass roads to Bacchereto, the toponym sasso marino, associated with a stylized drawing of a boulder. One can reach Pietramarina using paths shown on the municipality of Vinci’s "Hiking Trails Map".

Pietramarina in Etruscan times: a fortress-sanctuary at the peak of Montalbano

Amidst the centuries-old holm oak forest, we can see the remains of a massive defensive wall that encloses an area of about three hectares. The area began being frequented from the 7th century BC, but it was only in the Archaic period (6th century BC) that a stable settlement began to take shape. Recent archaeological investigations have identified several buildings, a sacred area, and at least one sector used as a covered warehouse, with a tiled roof supported by oak beams. Inside, the food reserves were probably kept in large, buried terracotta containers (dolii), generally used for storing cereals. The inhabited area was surrounded by massive walls in polygonal work, reaching a thickness of almost three meters. Although most of the fortifications peer out but little from the current countryside ground level, in some parts it has remained intact up to a height of about two meters, allowing us to appreciate its masonry technique. The fortified sanctuary of Pietramarina presents a continuity of life over several centuries, up to the Hellenistic age, at which era the whole site seems to show traces of fires and destruction. In this period, some parts of the site were monumentalized, such as, for example, on the southern side of the settlement, where a series of terraces built over previous structures must have given a dramatic effect to the renovated site, projecting it outwards. Even the cult sector, which the series of findings of votive objects dates to the time of foundation of the fortress, was monumentalized in the Hellenistic age, by the placement of a new cult building on the outside the ancient city walls. The renewal projects from the Hellenistic age must have given the new settlement a notably dramatic character, enhanced by its elevated and isolated position on the summit of the Montalbano ridge. The site is situated inside the Archaeological Park of Carmignano.

The sasso marino (sea stone) depicted on the map of the Capitani di Parte Guelfa of the territory of Vitolini recalls the round shape of the rock formation known today as "Masso del Diavolo" (the devil’s boulder). It is a suggestive outcrop of sandstone modeled by the cut of a rock staircase of unknown origin. Near sasso marino, the late 16th-century cartography shows the start of roads leading to Bacchereto. In fact, even the folio relating to the community of the parish church of Bacchereto, on the other side of Montalbano, shows the existence of a series of paths that went over the ridge at the stretch between Pietramarina and San Giusto. During Leonardo’s time, this group of rural roads heading downstream led, before arriving at Bacchereto, to the houses marked with the indication a toia (at Toia), a place of Leonardian memory. In fact, Toia was the name of the town where the family of Leonardo's grandmother lived, and on the late 16th-century maps for the community of the parish church of Bacchereto, we can clearly recognize the drawing of a small group of houses bearing this name. The toponym Toia is preserved today in the name of a local byway dotted with farmhouses, including the one tradition has identified as the home of Leonardo's grandmother. Irrespective of the exact identification of the house "da signor" (for the lord) of Toia, which merged in 1482 into the properties of Leonardo's father, we must certainly highlight another toponym of the area, fornia, which we can recognize near the usual band of streets descending from the ridge of Montalbano toward Toia and Bacchereto. Today Fornia is the name of a farm and a small ravine that descends from the ridge of Montalbano, just below Pietramarina, but it must be recognized that the toponym, in use since at least the 16th century, probably corresponds to the place marked by Leonardo on one of his most famous maps of the Arno Valley. On the famous map in the Codex Madrid, which includes the Montalbano massif (Madrid II, f.23r), we can read Fornia, among the names of the localities, which Leonardo positions on the northern slope of Montalbano, just below the settlements of Bacchereto and Verghereto. This is the only time when the small town of Montalbano is reported by Leonardo on any of the many maps that he crafted for this area of the Valdarno. The presence of this micro-toponym can perhaps only be explained by the meticulous knowledge Leonardo must have had of those places. As we have seen, the Bacchereto farms of Leonardo’s family, with his grandmother's house in Toia, were reachable, at one time, even by passing over Montalbano near Pietramarina, on the country roads reported by the Capitani di Parte Guelfa. Nearby, the locality fornia already stood at that time, perhaps even the very same Fornia that Leonardo reported on Montalbano in the Codex Madrid II.
Texts by
Silvia Leporatti / English translation by John Venerella
Related resources
Related places
External links
Gallery 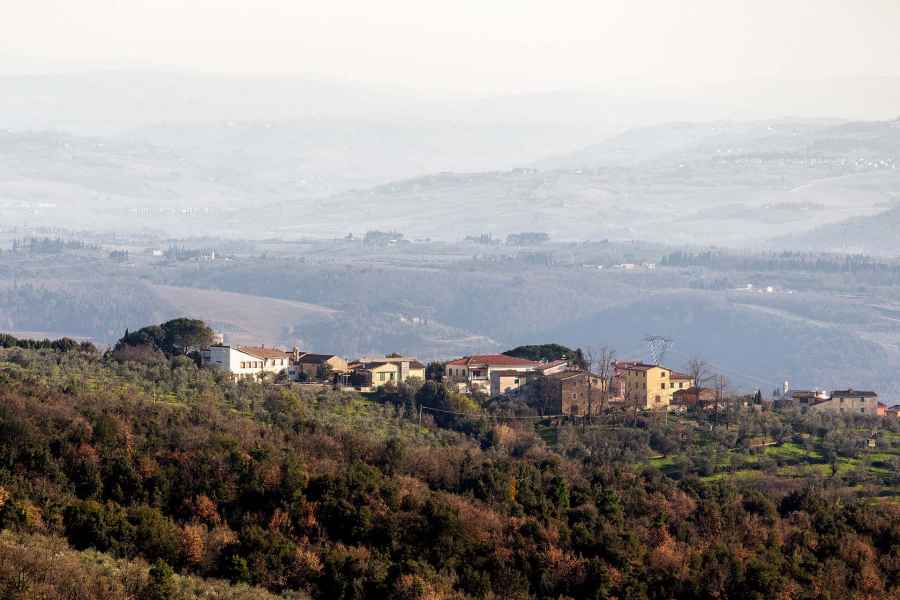 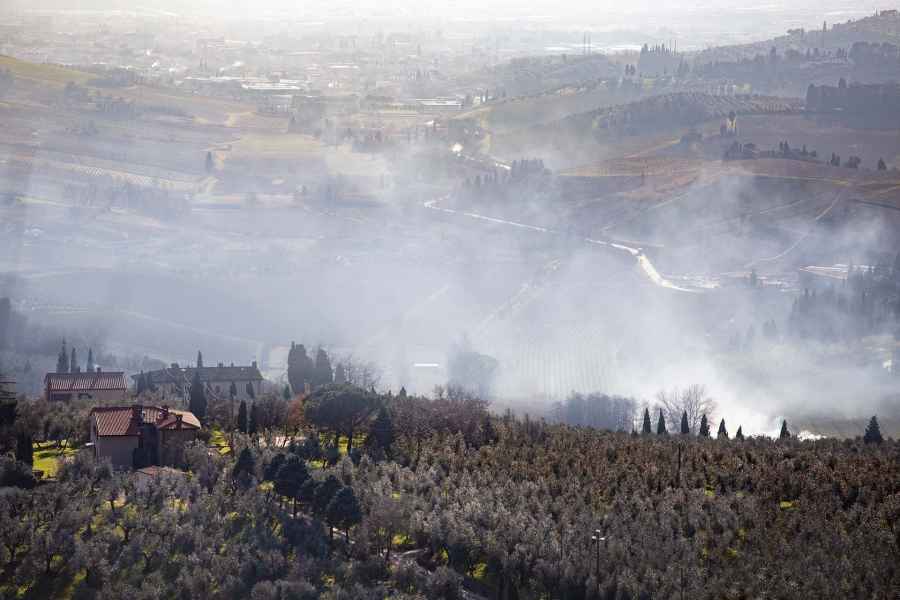 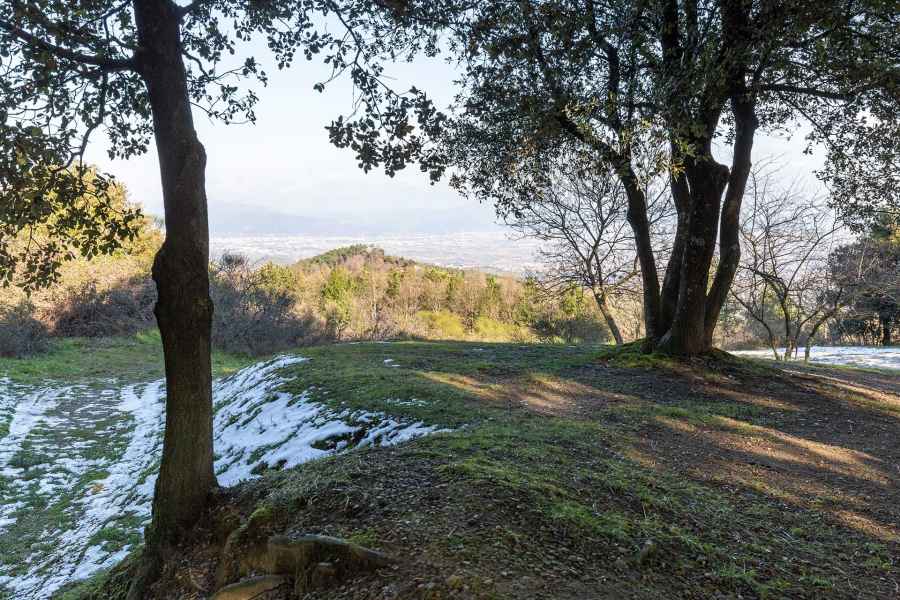 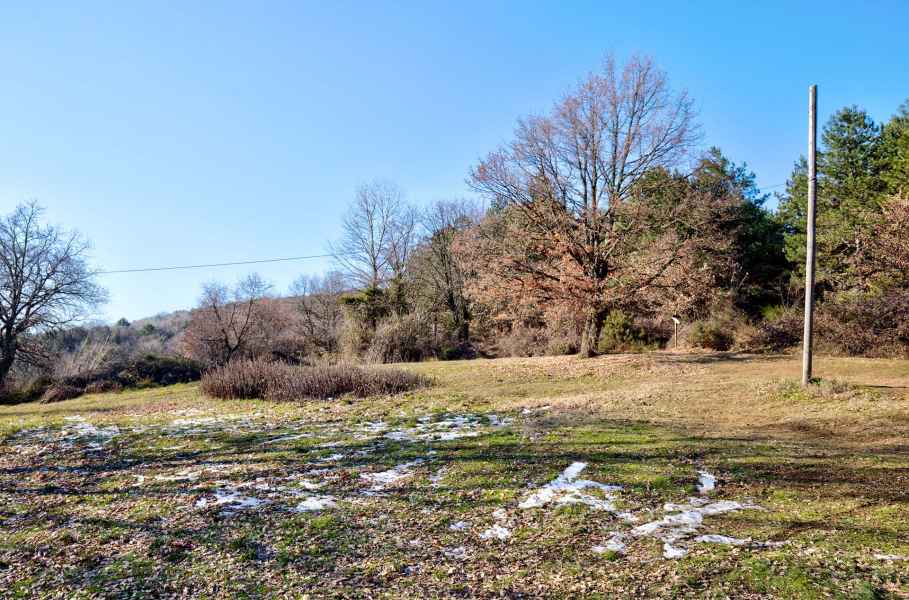