The Mills of Rio della Querceta

Rio della Querceta descends from the slopes of Montalbano, wedging itself in between the slopes hosting the hamlets of Santa Lucia and Mezzana (Faltognano), before reaching a point nearby the castle of Vinci and ending in the river Streda, just downstream of the castle. The watercourse runs through the lands where Leonardo's family had most of their farms. Along the paths that cross its course, we can still see some well-preserved mills whose structures may date back to the 16th century, and which Leonardo would certainly have had the opportunity to observe. On the same slope of Montalbano, in fact, not far from the gorge of La Querceta, Leonardo studied a system for damming the watercourses to create an artificial reservoir, demonstrating that he had a detailed knowledge of the orography and hydrography of the area. The mills of the ravine of La Querceta are included today by a system of paths that lead from Anchiano to the church of Santa Lucia a Paterno and Faltognano.

Rio della Querceta, descending from Montalbano, crossed through the territories of the ancient communities of Sant'Amato, Santa Maria di Faltognano, Santa Lucia a Paterno, and Santa Croce di Vinci. The highest part of the valley was wedged inside the districts of the three small country churches, while the lower part was included in the territory dependent on the castle church, the Santa Croce, the da Vinci family’s parish. Many of their farms belonged to the districts dependent on the churches of Faltognano, Paterno, and Vinci. The young Leonardo, who spent his early childhood at his paternal grandfather's house, would certainly have had the chance to walk the country roads that led from the Anchiano house, in the community of Santa Lucia a Paterno, to the farms of botro a Leano and quaranzola in the community of Santa Croce, and then to al capannile and alla noce, up to the farm of Santa Maria Nova, in the community of Santa Maria a Faltognano. The names of these places are found on the late 16th-century maps of the Capitani di Parte Guelfa, and are still preserved in the micro-toponymy of the farmhouses and hill farms located northeast of Vinci. The communities of Santa Lucia a Paterno and Santa Maria a Faltognano bordered that of San Lorenzo in Arniano: here as well, the da Vinci family had many plots of land, and it was, in fact, downstream from Rio di San Lorenzo that Leonardo conceived a system of barriers to create an artificial reservoir. The project is represented on three maps that show in detail the hydrographic system of the streams that descend from the slopes of Faltognano, Santa Lucia a Paterno, and San Lorenzo in Arniano.

The mills of Rio della Querceta: the Mulino del Gatto and the Mulino Nuovo

The first mill we meet along the road from the Leonardo’s Birth House at Anchiano going in the direction of Faltognano is the so-called Mulino del Gatto. In the 17th century it belonged to the Da Bagnano family and was surrounded by a chestnut grove. The terrains of the mill bordered the farm of Anchiano, in the community of Santa Lucia a Paterno, which Leonardo’s family had owned since the 1480s. Il Mulino del Gatto still today conserves the principle elements of the mill’s structure: the room for the millstones and for the storage of flours on the upper floor, and the vaulted room below that housed the horizontal waterwheel mechanism. Entering the ravine of La Querceta, we see another well-preserved mill, called Mulino Nuovo, which can be reached by taking the path that leads from Santa Lucia to Faltognano. Not far away were the enclosing walls of the Barco Reale Mediceo, the grand-ducal estate that was monumentalized in the early 17th century with a wall circuit over 50 kilometers long, enclosing a large sector of the ridge of Montalbano. In the community of Santa Maria a Faltognano and in the community of Santa Lucia a Paterno, Leonardo’s family owned many farms that are still recognizable today in the small rural villages and farmhouses bearing the names of Leano, Quarrazzola, Casa la Noce, Capannile, and Santa Maria, clustered around the country roads that branch off from the principal one, Anchiano-Faltognano.

The waters of Rio della Querceta, the rio castellano, and the mills of the castle of Vinci

The waters of Rio della Querceta, which originate from the source known as Il Sassone, flow beneath the slope of Santa Lucia a Paterno, wedged into the gorge between Anchiano and Poggio Marradino, west of Vinci. It descends into the valley at the foot of the castle, on the eastern slope, where in the last century it bore the name of Rio Bonchio, before flowing on to augment the brook Streda, downstream from Vinci. Just before the castle, a masonry barrage system (weir) intakes the waters of Rio della Querceta, leading them toward the castle. Through a long artificial canal, the waters derived from Rio della Querceta went to feed at least two hydraulic systems for Vinci: the mill of La Doccia and the system of hydraulic works for the village of Vinci. The first, situated along the road to Montalbano just upstream from the castle, was drawn by Leonardo on a renowned folio of the Codex Atlanticus, accompanied by the inscription molino della doccia di vinci (mill of La Doccia di Vinci). The municipality’s mill was part of the second complex, which was situated at the foot of the castle at least since the beginning of the 15th century. In 1478 the municipal authorities handed over management of it to Leonardo’s family. The importance of Rio della Querceta, whose waters, as seen, powered the castle’s hydraulic systems, would suggest that it ought to be recognized as the watercourse that the statutes of Vinci referred to as the rio castellano (the castle brook), for which a public sort of special protection was prescribed. As can be seen in the maps of the Capitani di Parte Guelfa, the 19th-20th century name of Rio Bonchio, the name assumed by Rio della Querceta along its final stretch, probably has more ancient origins. It is possible that it took its name from the Bonci family, owner of most of the lands located on the eastern slope of the Marradino hill, at the base of which the watercourse flowed.
Texts by
Silvia Leporatti / English translation by John Venerella
Related resources
Related places
External links
Gallery 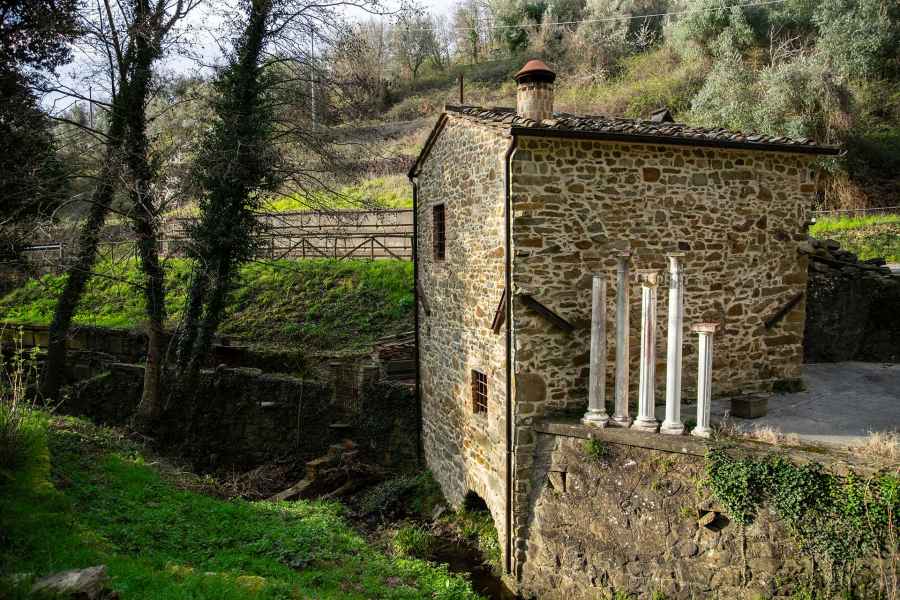 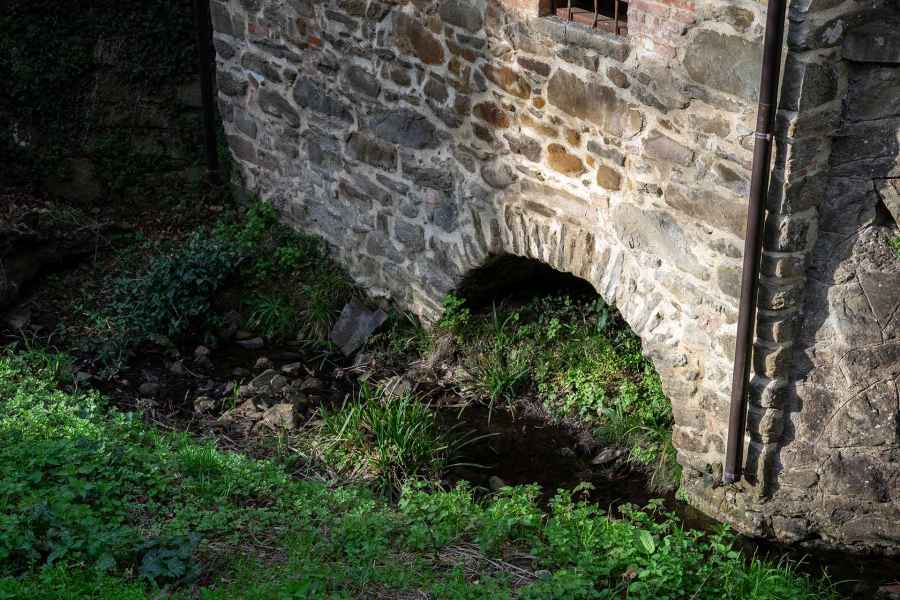 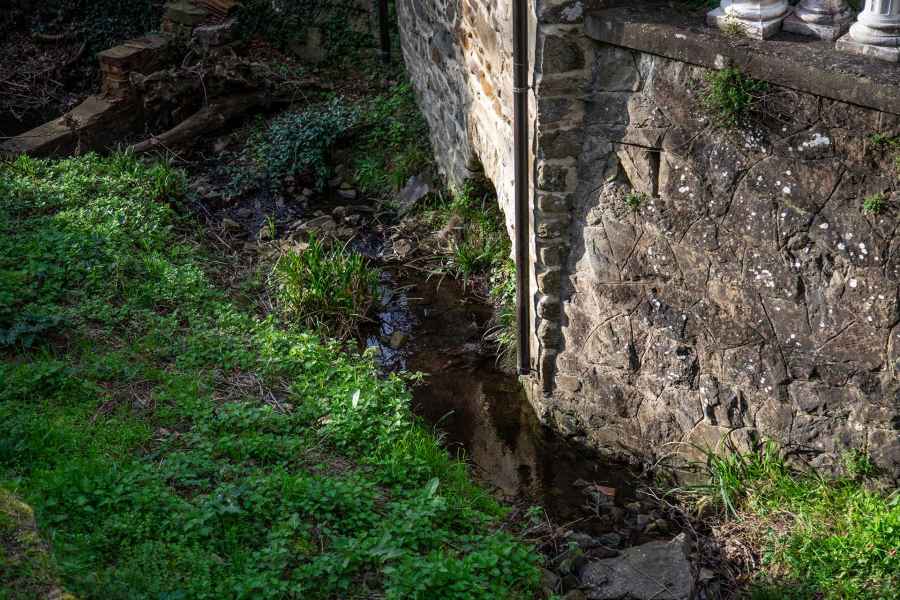