The small fortified village that Leonardo situates on map RLW12278, to the right of the Elsa, between Castelfiorentino and Granaiolo, must be identified with the current village of Cambiano, in the municipality of Castelfiorentino. Leonardo draws it as a small, walled castle with towers, and identifies it with the toponym "camiā [no]", the oldest name by which this locality has been known. During Leonardo’s time the structures of the ancient castle of "Chamiano" must still have been visible.

The origins of Cambiano: the Cadolingi curtis

The earliest mention of the castle dates back to a rather late period, at the beginning of the 14th century. A notarial act from 1313 mentions a plot of land located ad pedes castelli de Camiano, in populo Sancti Prosperi de Camiano (at the base of the castle of Camiano, in the community of San Prospero of Camiano). In reality the locality had already been frequented, in much older times. Beginning from the year 901, in fact, documents mention a place near the Elsa called Comiano / Camiano / Camiana, where assets of the bishop of Lucca were supposedly concentrated, including a curtis with all its appurtenances. At the beginning of the next century, however, the curtis of Comiano seems to have been part of the possessions of the noble Cadolingi family. At the turn of the year 1006, in fact, Count Lotario confirms its transfer to the monastery of San Salvatore of Fucecchio. A large part of the lands that went to make up the Cadolingi curtis of Comiano were located near the Elsa, in the territory of the parish church of Sant'Andrea of Empoli, a detail that has made it possible to identify this ancient locality with the current Cambiano, in the commune of Castelfiorentino.

The castle of Camiano between the 14th and 15th centuries

During the first centuries of the Middle Ages, Comiano / Camiano was the center of the curtis, the place where the buildings and the main services of the curtis organization were located. We have no information on the times and methods of transformation of the ancient Camiano, but even so, we know that a few centuries later, at the beginning of the 14th century, one of the Valdelsa curtis of the Counts Cadolingi had then taken the form of a fortified town. The population and social structure of Cambiano in the Late Middle Ages were typical of a rural town in the Florentine contado, distinguished from the other neighboring towns for the fact of its having its small, inhabited center surrounded by walls. In the first half of the 15th century, the castle of Chamiano (as it is found written) seems to have been used still as a place of residence, and still fortified with defensive structures. The declarations reported in the 1427 Florence land registry, in fact, record houses within that border the walls of the castle. In one case, declaration is made of possession of a torricella con palchi con colombaia (small tower with scaffolding, with dovecote), a type of building developed particularly in height, which seems to indicate the existence of a certain articulation of building typologies present in the castle at that date. In another example, mention is made of a little house in the "fortress of Chamiano" confirming, if not the exact effectiveness, at least the appearance that the castle must have had in the Late Middle Ages.

The Cambi family of Camiano and the Villa of Cambiano

This was the small center of the Valdelsa from which came the family of notaries active in Florence throughout the 14th century, and which was used also in signatures, as place of origin: da Camiano, “from Camiano.” The first professionals of this family known from written sources are Cambio di Michele and Michele di Ser Cambio da Camiano, “from Camiano.” In 1308, they were both in Florence, drafting the compromise to be signed by the two disputing branches of the Ubaldini family. Later we find them, again in Florence involved in drafting acts, which even end up in registers of public papers, such as, for example, the Liber Censuum of the municipality of Pistoia (Liber Censuum, year 1317, Florence, credit balance of Lapus quondam Strozze; year 1329, Florence, palace of the priors of the arts, peace between the municipalities of Florence and Pistoia). From the Pistoia register, still active in the first half of the 14th century was another notary, originally from Camiano, Francesco di Piero de Camiano, from the municipality of Castelfiorentino, whom we see working at Prato, on the same dossiers with which the notary Michele di Ser Cambio was involved, in Florence, in those same days. In the second half of the 15th century, the Cambi family appears to have been the largest landowner in the small rural municipality of Camiano. It is probably to this family, who originated at this place, that we owe the transformation of a part of the ancient castle into a refined country manor house. In the second half of the 15th century the Cambi, by this point Florentines for some generations, found new use for the old workers' houses that they still owned, in what was probably the castle village, transforming them into their "house for the lord." Remains of this first structure are visible inside the Villa Pucci, which occupies the western slope of the low hills of Cambiano Alto. The ample loggia, set on brick pillars of octagonal base that can still be seen on the ground floor of the villa, belonged to the first stately residence built by the Cambi family in their ancient estates. The most significant transformations occur only toward the end of the 16th century, when the primitive house for the lord was raised up, to the point of taking on its characteristic, compact block structure. During the 18th century the residence was completely reconfigured, on the initiative of Bernardo Cambi or of his son Niccolò Xaverio. The building was raised in the central part, leaving the main façade articulated over three floors above ground, with two lower side wings, made symmetrical by the addition of the building element to the left. The new façades were made uniform by new openings, among which stand out the ones on the ground floor, singularly resolved with an extremely simplified version of the finestra inginocchiata (kneeling window). On the façade, above the rusticated portal in neo-Cinquecento style, the Cambi family coat of arms. At the same time, the slope below was remodeled quite significantly, and the picturesque garden was created, with an ascending path marked by stairways embellished with wall fountains. In the garden at the back, we find the church of San Prospero, the castle’s ancient parish church. The first mention of the church dates from 1260, but in the 15th century, it was already a private chapel belonging to the Cambi family. Originally it was on a plan with three naves, and with a portico at the facade, with arches supported by massive pillars. The restorations of the last century have compromised its interpretability.

The origin of the name of Cambiano and Leonardo da Vinci

When, at the beginning of the 16th century, Leonardo represented Cambiano on map RLW 12278, the small town of the Valdelsa must still have had the appearance of a fortified castle, as can effectively be seen in the drawing. On the slope where Villa Pucci stands today, the first "house for the lord" of the Cambi family must already have been built, while on the upper part of the hills, today Cambiano Alto, the principal structures, civil and military, of the castello de Chamiano (Chamiano castle) still maintained their effective utility. The small chapel of San Prospero, which can be seen today in the highest part of the English garden, at the back of the Villa Pucci, was the castle’s ancient parish church. We do not know at what point the castle structures were definitively canceled, nor exactly when the modern expression, Cambiano, began prevailing. We are certain, however, that at least until Leonardo’s time, when the castle was still alive, it still bore the name of Camiano, as we read in the caption Leonardo inscribed under the drawing of the small fortified village of the Valdelsa.
Texts by
Silvia Leporatti / English translation by John Venerella
Related resources
External links
Gallery 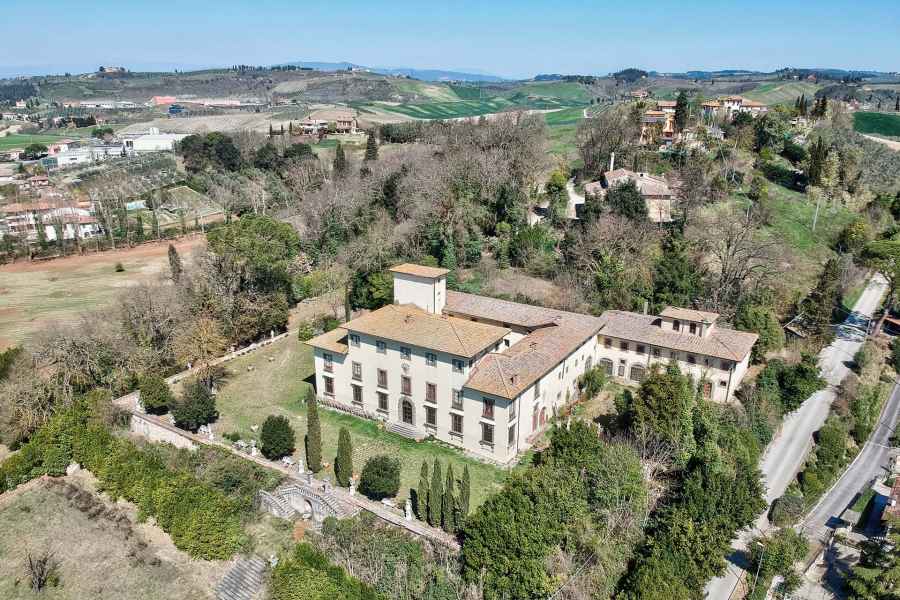 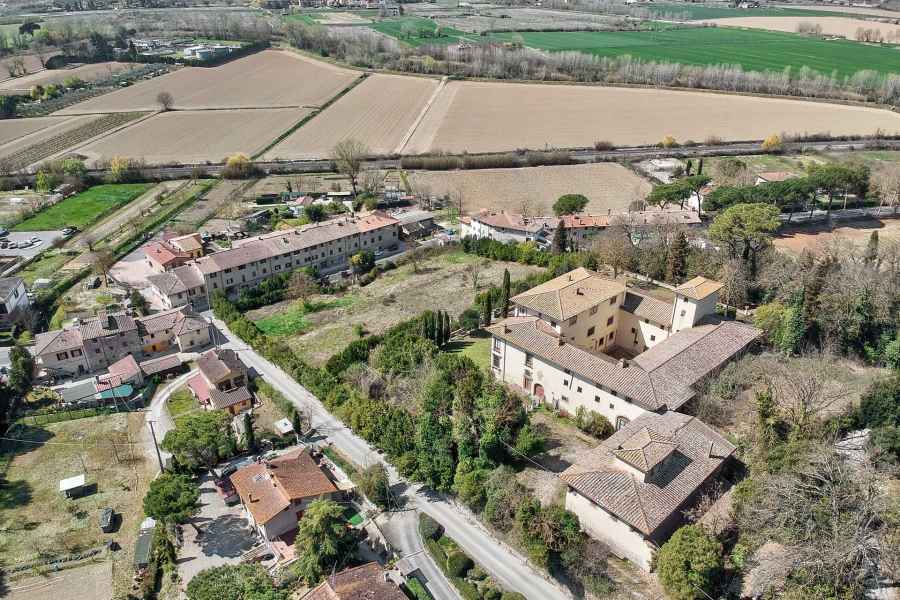