The small village represented by Leonardo on the left bank of the Elsa, on map RL 12278 of the Windsor collection, marked by the toponym "varna", near Catignano, is with certainty to be identified as the hamlet of Varna in the municipality of Gambassi Terme. Leonardo depicts Varna as a small town surrounded by walls over which at least two turriform buildings stand out. It is not easy to trace back to the exact locality of the village in Leonardo’s drawing. Today, in fact, there are at least two late-medieval architectural complexes that incorporate at least one tower: the villa Capei and the villa del Poggio. Incidentally, the written sources never mention Varna as a castle, but rather as a villa, a simple cluster of houses without a wall circuit.

The name of the place is rather ancient. The first attestation dates back to the year 1104, when we find in loco a Varna (on site in Varna) two members of the noble family of the Cadolingi, Ugo and Lotario, in the act of yielding the castle of Germagnana to a series of personages—certainly local nobles—the remains of which can be seen on the small relief in front of the oratory of Santa Caterina, just over a kilometer from Gambassi. Varna at the beginning of the 10th century was therefore a place endowed with structures suitable for hosting eminent personalities of the caliber of the two comites Cadolingi and for the stipulation of deeds—passages of property and of rights of a certain importance—conveyed by the professional activity of a notary. As for the form of the inhabited area at the time of the Cadolingi, it seems that, unlike the very nearby Cadolingian castle of Catignano, Varna had never been a fortified village. Moreover, the very short distance between the villa of Varna and the Cadolingian castle makes it quite plausible that the two villages could have been settled in different ways. It is not impossible that the small village of Varna was the place of residence of the personages who appear as beneficiaries of the concession drawn up in 1104, the brothers Uselmo and Alberto del fu Uselmo. They were almost certainly of the noble family of the contado that would participate in the foundation of the castrum novum of Gambassi. In 1182 we find once again prominent figures linked to the local aristocracy gathered in the small town of Varna, under a porticoed building, where the deed of transfer of the castle of Santo Stefano was drawn up. Among the witnesses, we may recognize personages related to the foundation of Castelfiorentino.

The villa of Varna in the 1200s: from the bishop of Volterra to San Gimignano

The villa of Varna, frequented from its beginnings by prominent personalities of the local nobility—and probably linked, in its most ancient period, to the counts Cadolingi, at the beginning of the 13th century—was already counted among the possessions of the bishop of Volterra. It would follow the fate of the neighboring Cadolingian castles of Gambassi and Catignano, which, after the extinction of the noble house, ended up being incorporated into the Volterrano episcopate. In an act dating from 1211, the bishop of Volterra claimed the rights he held on land and communities of the territory, and therein, also, the income of the church of Varna, dedicated to San Giovanni, is found mentioned. The community that belonged to the church of San Giovanni was composed of the inhabitants of that ancient village that had developed along the ridge road running parallel to the Elsa. Varna was involved in the difficult phases in which the bishop of Volterra was opposed to San Gimignano, the Valdelsan village that, through the course of the 13th century, acted in the construction of its own territory, to the detriment of the bishop. In these years the Volterra bishopric, in great economic difficulty, was forced to pledge several properties, including the Valdelsan castles of Gambassi, Ulignano, Pulicciano, and Catignano, in addition to the villa of Varna. We have no other information about this location, but it is very likely that during the 13th century, it followed the fate of the nearby castle of Catignano, which entered into the orbit of San Gimignano, before its complete and definitive annexation to the Florentine contado by the end of the 13th century.

Florence and the towers of Varna drawn by Leonardo

In Leonardo’s famous map RL 12278, the profile of Varna stands out along the Elsa, depicted as a fortified village surrounded by walls, the same form given to Catignano, Gambassi, and Castelnovo d'Elsa, castles that characterized the landscape of the hills on the right side of the Elsa. However, in the written sources, the locality of Varna is always defined as a villa, or an open settlement. The only reference to a fortified village existing in this place dates back to 1356, in a document drafted in the community of San Giovanni di Varna, near the locality of Castellare, a place that would bear witness to an old, disused fortification. Of the Varna towers depicted by Leonardo, we can perhaps now make out a trace near the villa Capei (locality Castello), where a brick tower is still standing, flanked by a curtain wall, probably dating to the Late Middle Ages. In this regard, it should be noted that in the early 14th century, the area of Varna was frequently crossed by militias engaged in the war against the Emperor Henry VII. In 1313, the Florentine troops in the area were ordered to destroy every isolated building (house, hut, or haystack), which might have served as a refuge for the enemy, with the exception of the villages of Varna, Gambassi, and Catignano. In this period the security of the rural population was entrusted to those few villages that, even if small, could offer some shelter, whether they were castles of ancient origin, such as Gambassi, or fortilitia, recently prepared in private residential complexes that had begun dotting the Florentine environs, as may have happened in Varna. The fortified houses of Varna, or in any case the defenses that had been built there during the 14th century, are maintained in the foreground on Leonardo’s drawing, with the intention of representing on that map the main fortified places of the Valdelsa, for strategic purposes. Among these he also inserted Varna, still well characterized, in the early 16th century, by those fortified houses that, a century and a half earlier, had ensured the sole manner of security for the rural population.
Texts by
Silvia Leporatti / English translation by John Venerella
Related resources
Related places
Gallery 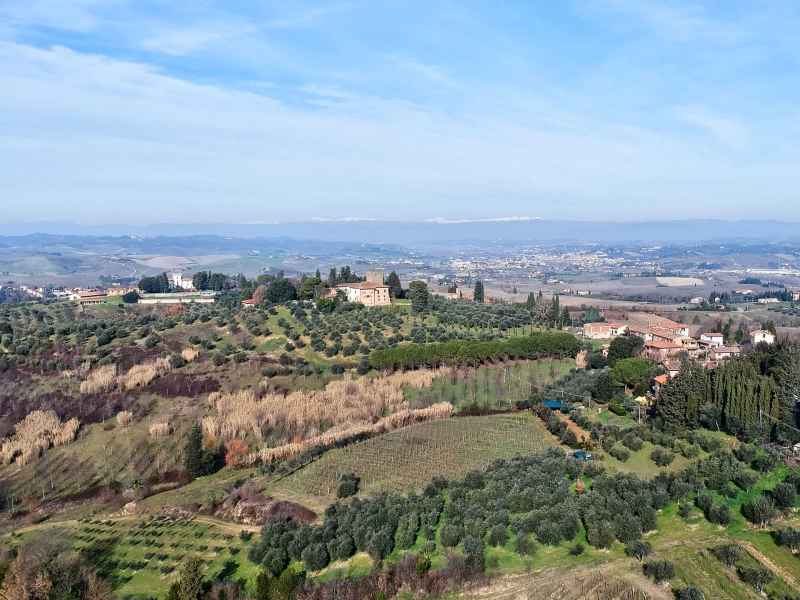 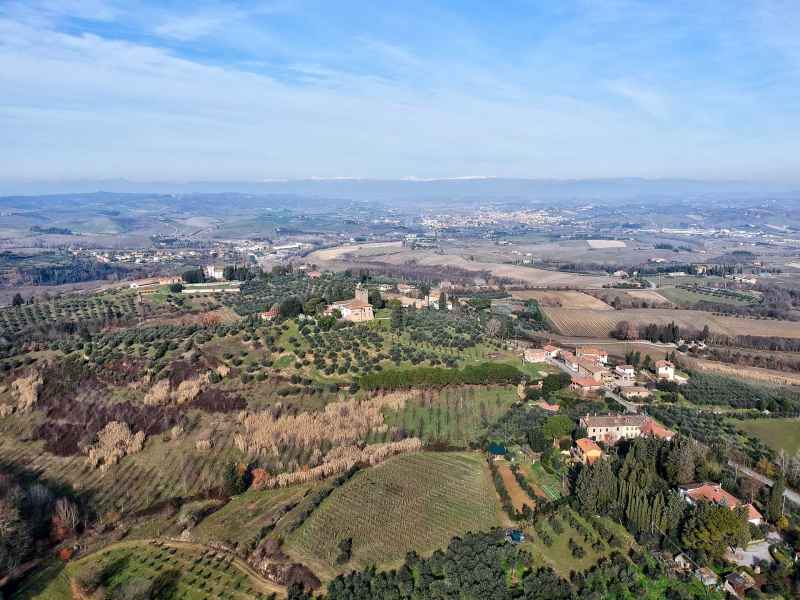 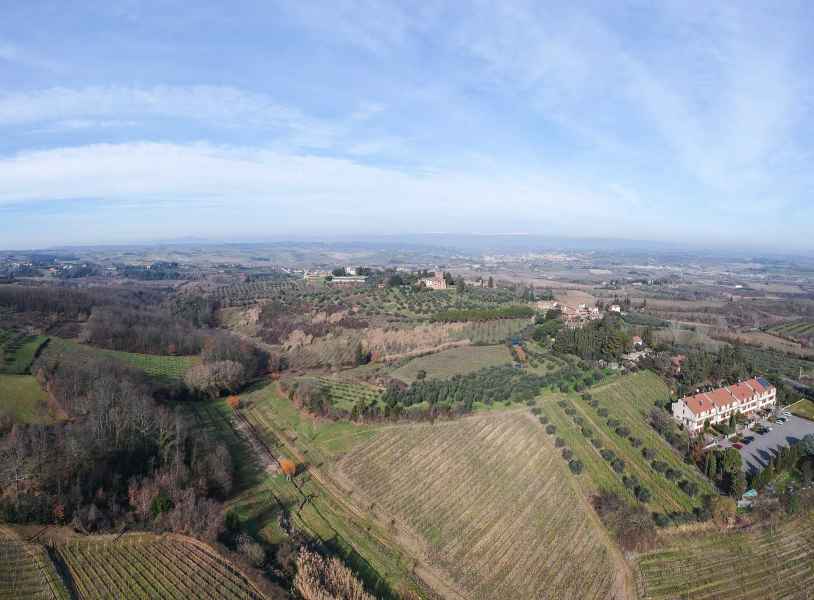 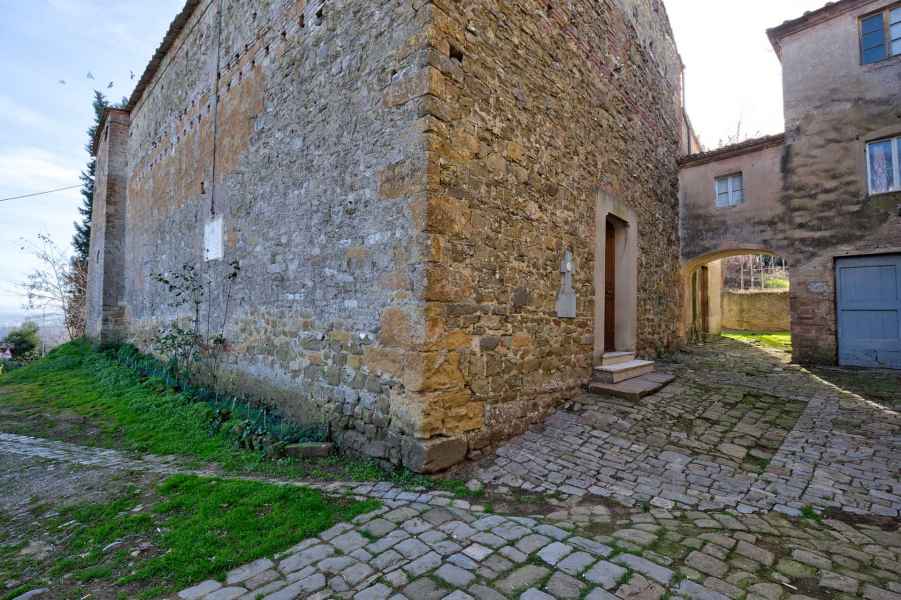 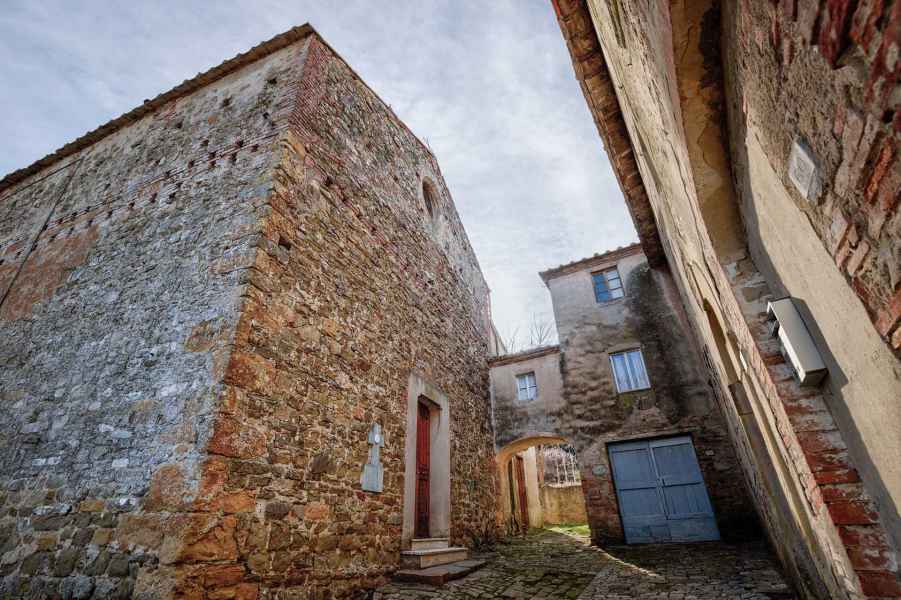 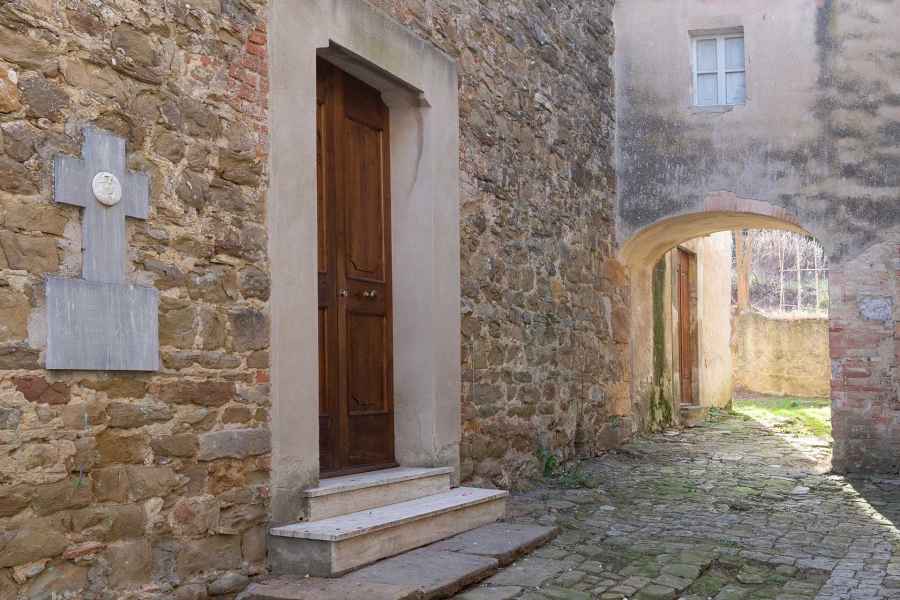 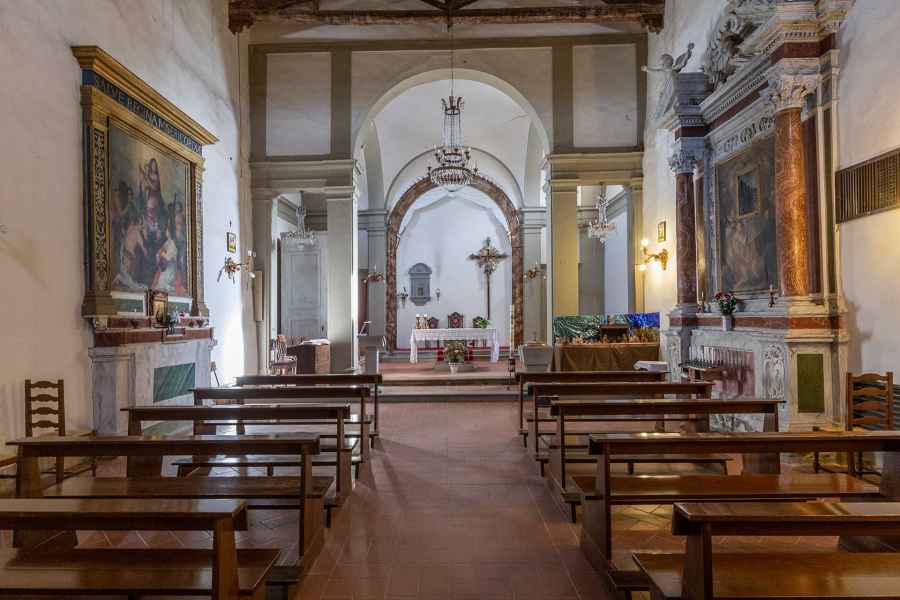 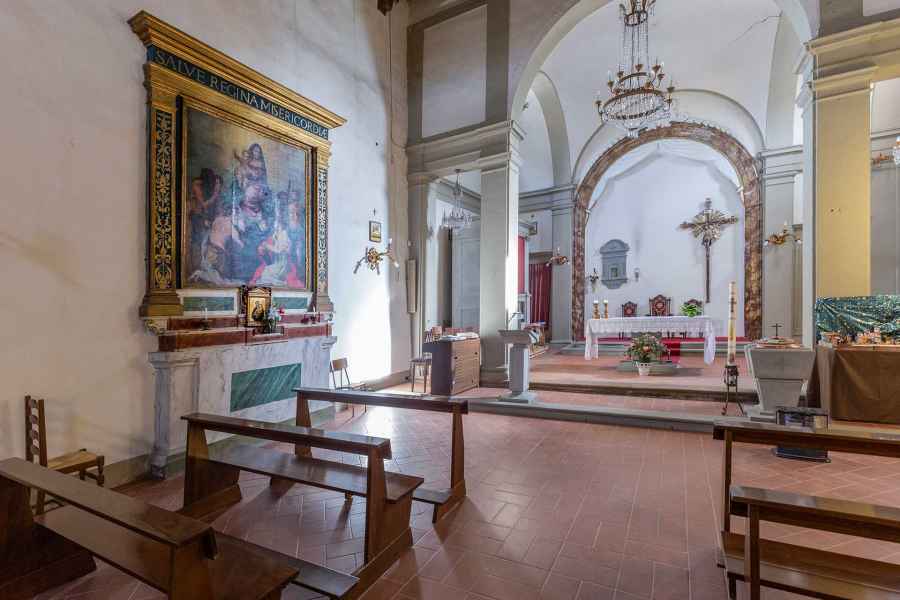 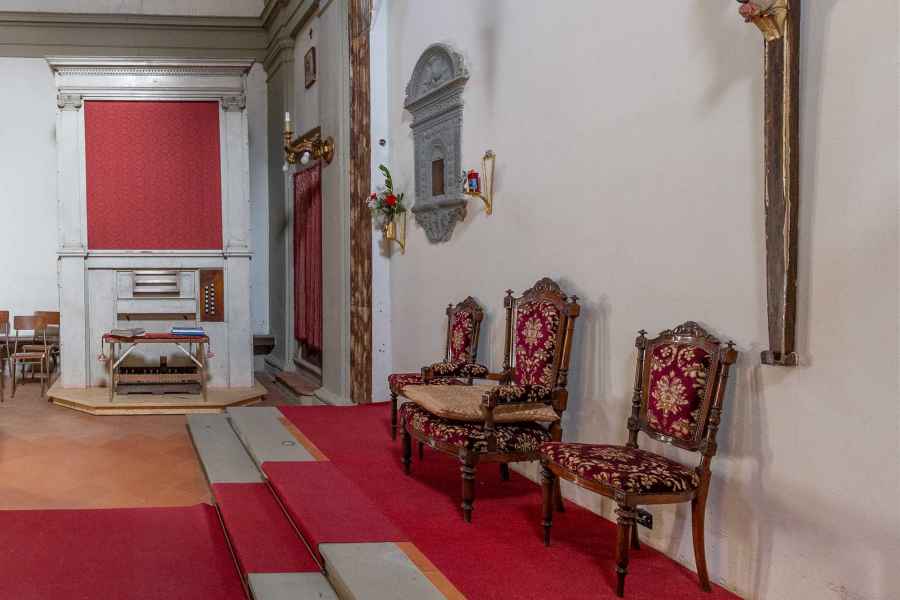 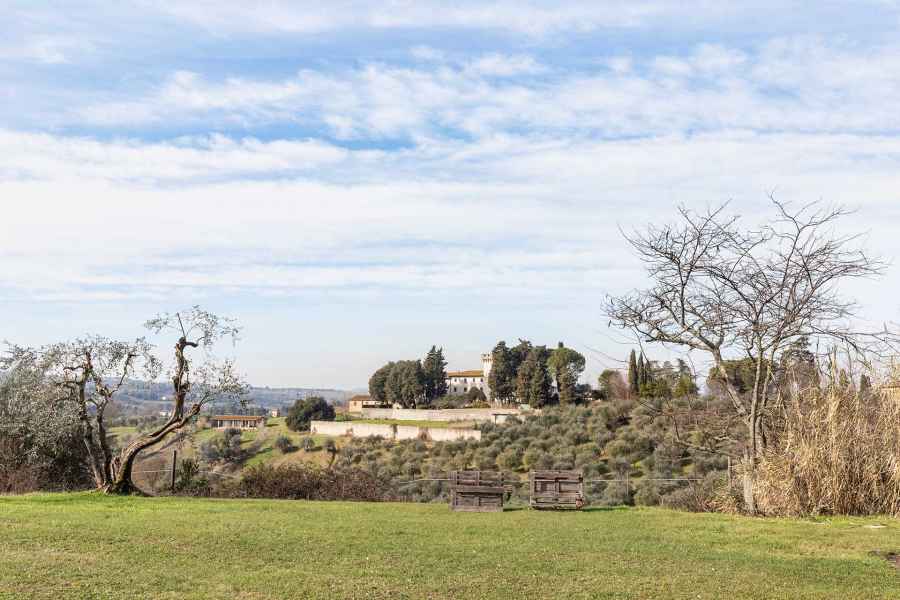