Orbignano, a small hamlet of the municipality of Lamporecchio, has very ancient origins, as does the name itself. During the medieval period, the locality was associated with one of the parishes dependent on the parish church of Lamporecchio, Santa Maria a Orbignano, which was in a position quite close to the border with the municipality of Vinci. In the community of Santa Maria del Pruno (blackthorn)—so it was called then—the da Vinci family owned some properties, including houses and land, where the descendants of Leonardo's half-brother Ser Domenico da Vinci lived. The church of Santa Maria al Pruno still stands today, even if in late form, the result of changes made during the 17th century. These areas can also be reached by following the local byways of the municipality of Vinci’s "Hiking Trails Map".

The origins: the episcopal curtis and the early medieval village of Urbiniano

The locality of Urbiniano betrays, with its Latin toponym of praedial type, the historical presence in ancient times of land ownership units on this side of Montalbano. During the Early Middle Ages, in the lands of Orbignano, which mostly belonged to the Pistoia church, the olive tree was cultivated, just as it is even today. Historical documents speak of the presence of houses, in addition to cultivated fields, a sign of the existence of population centers in the area. The most certain traces of an episcopal curtis center date from the second half of the 12th century, while in 1196 a clear reference was made to an actual inhabited area. In fact, in the list of appurtenances of the bishop of Pistoia confirmed by Emperor Henry VI, the villa de Urbiniano appears as an outright village dependent on the Pistoia bishopric.

The small town of Orbignano soon entered the territorial project of the municipality of Pistoia. In fact, since the beginning of the 13th century, the documents of the Liber Censuum of the municipality of Pistoia multiply, revealing a long dispute between that city and the ancient lord of those places, the bishop of Pistoia, for jurisdiction of Orbignano. As known, in the middle of the century, Orbignano was already included in the large census of the "fochi" (families, or houses) of the municipality of Pistoia (liber focorum) but in 1259 it was still necessary for the bishop to intervene for the appointment of the local podestà. A fragment of the life of the small village of Orbignano at the end of the 13th century can be read, in the umpteenth dispute with the bishop of Pistoia, collected in the Liber Censum (No. 453). One Sunday during the year 1279, the mayor, Barlectus de Cancelleriis, the council, and all the men of Orbignano were summoned to sort out the question. The assembly took place in front of the church of Santa Maria de Orbignano. The church porch then functioned as a platea comunis, namely, as a public space where the community gathered in assembly at the sound of the church bell.

Orbignano and the municipality of Vinci

Orbignano was always on the edge of the territory that traditionally depended on the ancient Guidi castle of Vinci. In 1254, when the noble family ceded the castle to the city of Florence, one of the boundaries of the castle district coincided with one of the hills on which the men of Orbignano had built, at the time, a fortified point of defense. With the passage of the castle of Vinci to the city of Florence, then in booming expansion toward the direction of Pistoia, this area became one of the most sensitive points of the border of that city. The community of Orbignano, still swearing fidelity to the magistracy of Pistoia in 1313, by the mid-14th century was already part of the Florentine comitatus and dependent, from an administrative point of view, upon the town of Vinci. The administrative district of the ancient Guidi castle was in fact composed of the communities of San Lorenzo di Arniano, Santa Maria in Faltognano, Santo Amato, and Santa Maria di Orbignano, of San Bartolomeo a Streda and San Pantaleo and Sant'Ippolito in the valley. The small medieval village of Orbignano, with the church of Santa Maria al Pruno, entered to become part of the daily life of Leonardo da Vinci’s family in the 15th century.

In the small village of Orbignano, there were land plots and houses owned by the da Vinci family. In fact, it appears that Ser Piero, Leonardo's father, owned a farm in the locality of Chostereccia, situated in the community of Santa Maria al Pruno, in the municipality of Vinci. As seen, in fact, the community of Orbignano was among those included in the municipal district of Vinci from the mid-15th century, following the administrative reorganization imposed by Florence. Upon the death of Ser Piero, in 1504, the Costereccia farm passed to his son Domenico, Leonardo's half-brother. The Orbignano house became the usual home of this branch of the da Vinci family. In 1536, in fact, Domenico married right in the church of Santa Maria al Pruno, with Fioretta di Stefano Vittori da Bacchereto. He lived in Orbignano until his death, as evidenced by the testaments he dictated in his home at Costereccia, in the community of Santa Maria al Pruno. At the time of his death, in 1563, the parochial register for the dead had not yet been established, so it is not possible to know with certainty whether he was buried there. It is certain, however, that all his descendants were. Starting from Domenico's son, Lorenzo—Leonardo's half-nephew—all the members of this branch of the da Vinci family were buried in the cloister of the church of Santa Maria al Pruno. The community of Orbignano, therefore, hosted a branch of the family of Leonardo for over two centuries, in the Costereccia house.

The church of Santa Maria de Urbignano is mentioned in written sources beginning only from the end of the 13th century, when the community of the small village on the southern slope of Montalbano still belonged to the Pistoia district. Only beginning from 1376 do we find the title of Santa Maria al Pruno, owing probably to the existence of a local micro-toponym that later entered in use for the name of the sacred building. The so-called Madonna del pruno, a wooden sculpture believed to date from the 14th century, was placed above the new altar ordered by the prior Begliomini in the 18th century.
Texts by
Silvia Leporatti / English translation by John Venerella
Related resources
Related places
External links
Gallery 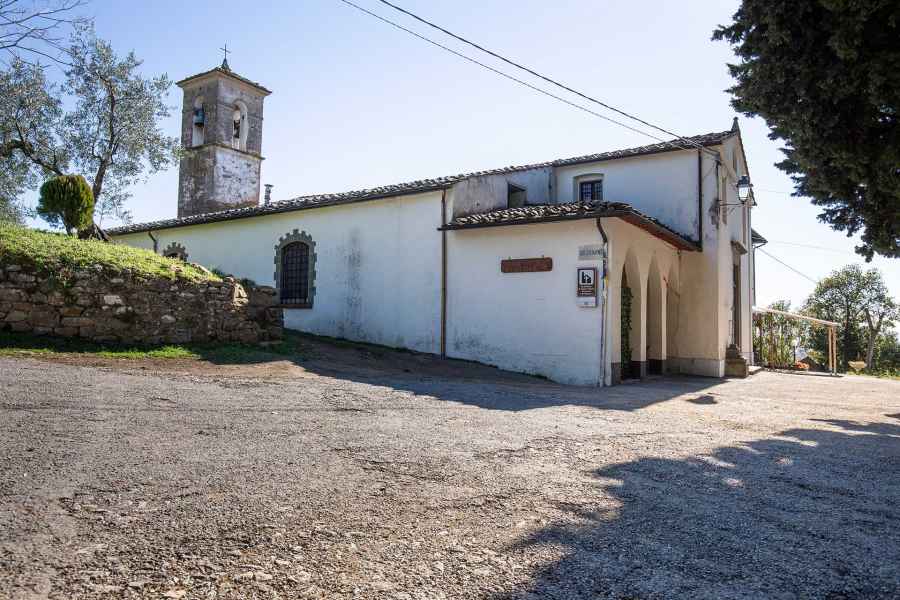 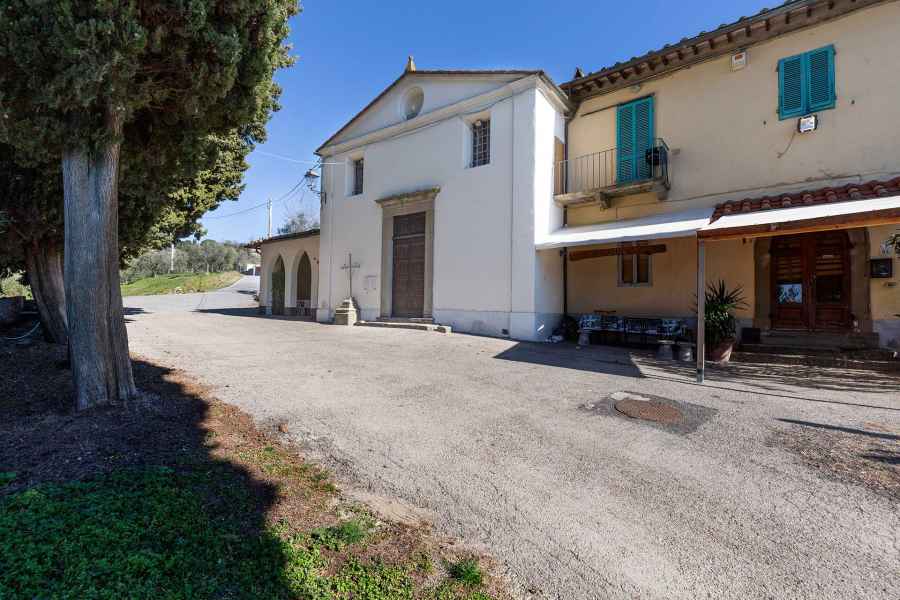 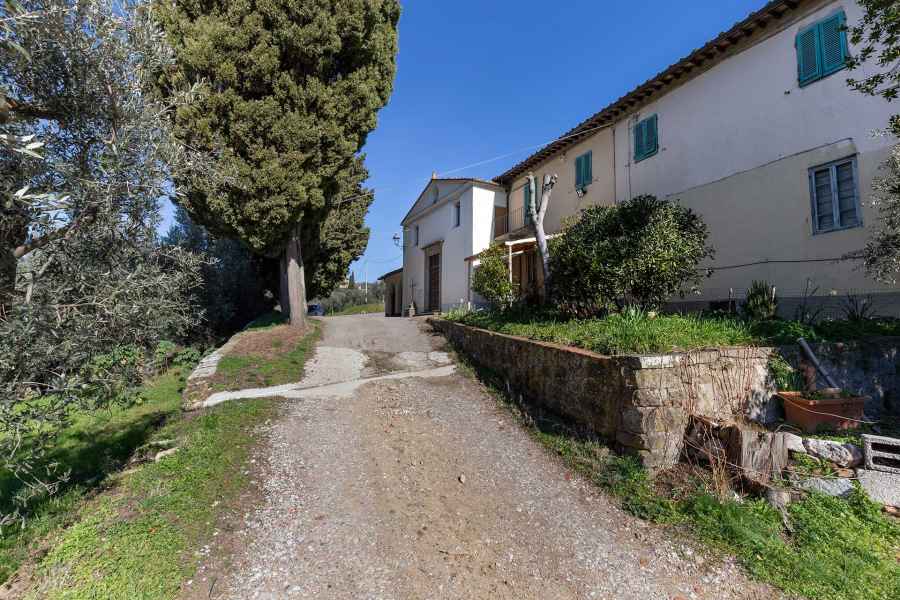 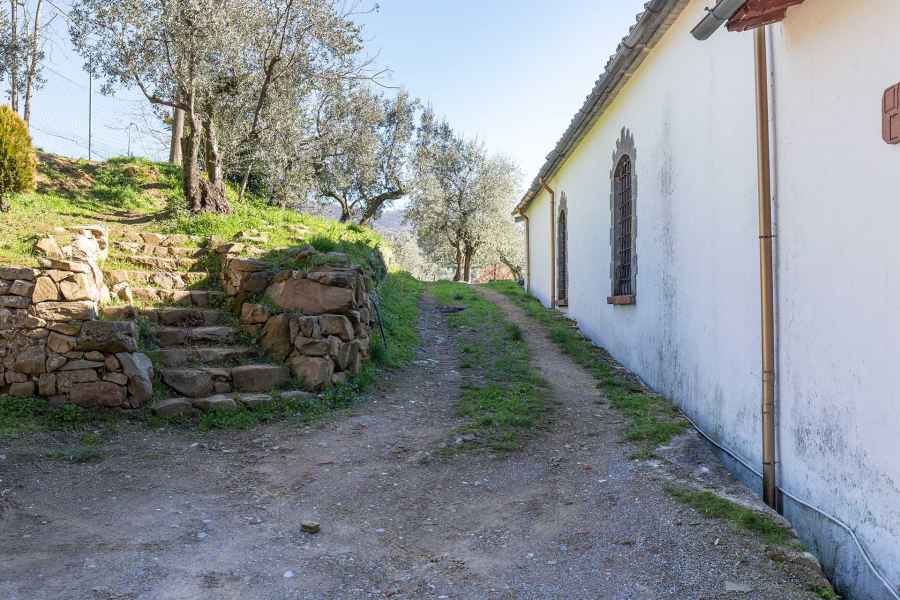 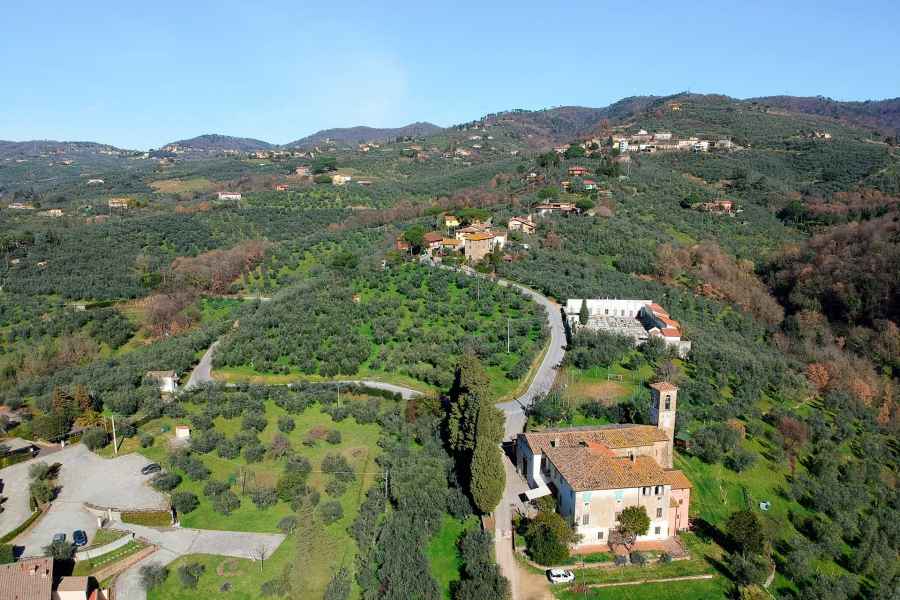 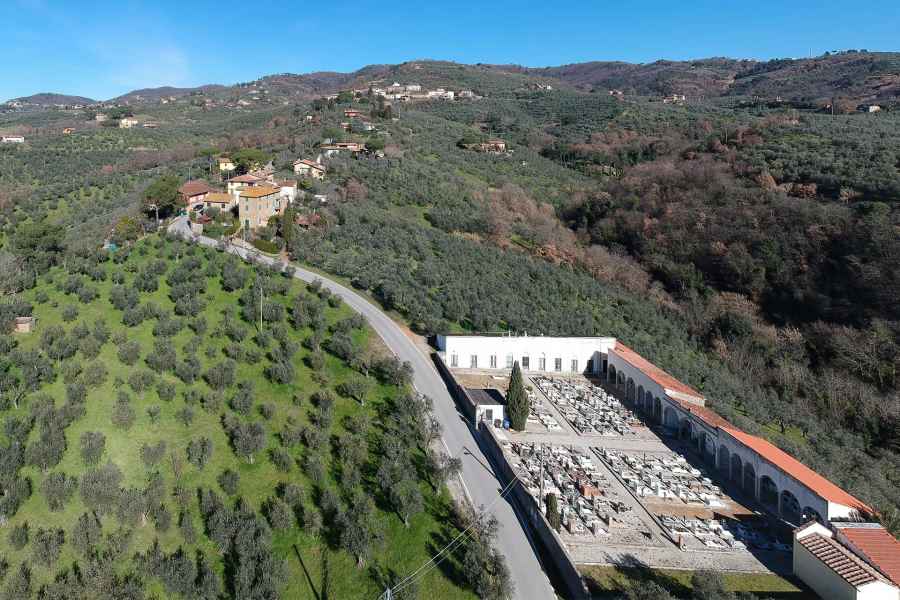 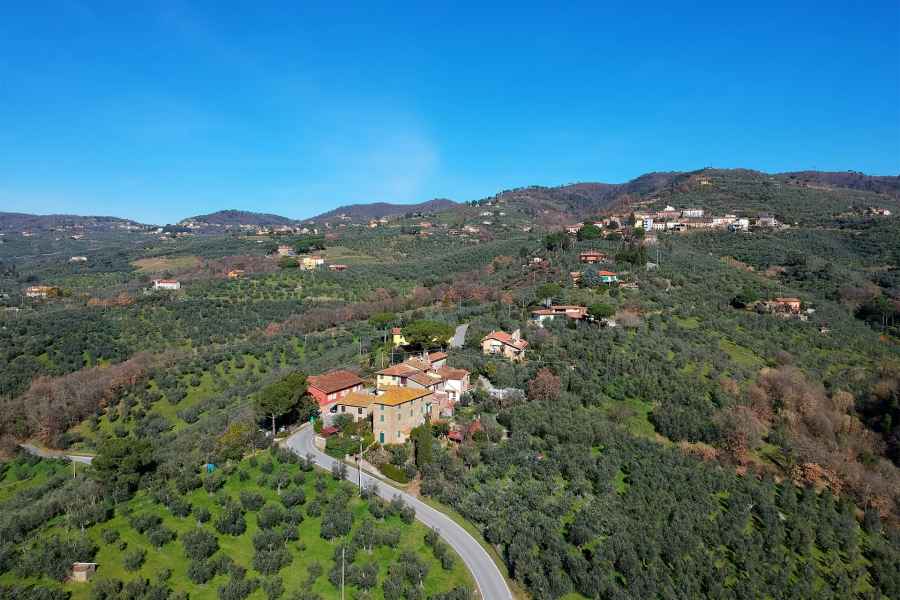