Tavern-Butcher Shop of the village of Vinci, at the Androne Ciofi

The town of Vinci preserves the trace of the urban layout it had during Leonardo’s time. Between the streets and squares of the castle and the village, small fragments of the life of Leonardo and of his family can be traced. One of the most singular is the building that is currently next to the present-day Androne Ciofi, the covered passage leading to the road toward San Pantaleo. Archival research and comparison with the historical land registers have made it possible to recognize in this building the tavern that was rented by Giovanni, one of Leonardo da Vinci’s younger half-brothers. The inn was at the beginning of the road toward Montalbano. On that same road, but farther along, at Anchiano, in the complex purchased by Leonardo's father, a "chasa da oste" (house for landlord) had just been begun.

The micro-histories of the many sons of ser Piero da Vinci: Giovanni da Vinci and the village tavern

Leonardo's father, the notary Piero di Antonio da Vinci, had four wives, as the first, Albiera di Giovanni Amadori, who married the year Leonardo was born, and the second, Francesca di ser Giuliano Lanfredini, died prematurely, without leaving any children. From his last marriage, with Lucrezia di Guglielmo Cortigiani, Ser Piero produced four children, the last of whom, Giovanni, was born in Florence in 1498, but, like many of Leonardo's other half-brothers, he lived his entire life in Vinci. The families of Leonardo's half-brothers, whose lineage it has been possible to reconstruct, were rooted around Vinci for generations. For example, we know that his half-brother Domenico married and lived in Orbignano, on the Costereccia farm, one of the most substantial of the possessions purchased by ser Piero, Leonardo's father. Another of Leonardo’s half-brothers, Guglielmo, settled in the house of Anchiano, where his family lived for two generations. Guglielmo was a few years older than Giovanni, the youngest of Leonardo's half-brothers. The close communion of interests between these two brothers that can be deduced from the tax documents (they are united together in the same land registry record) leads us to believe that they lived in the same house, that is, the house at Anchiano, in the community of Santa Lucia a Paterno. The two brothers were enrolled for years in the Confraternita della Compagnia dello Spirito Santo: and while Guglielmo was on several occasions "prior" of that pious association, the youngest half-brother, Giovanni, was elected in 1535, along with other confreres, to the role of "festaiolo" (merrymaker). And at least since the previous year, Giovanni had managed the Ridolfi family tavern and butcher shop, which was situated in the castle village.

The tavern and butcher shop of Giovanni, Leonardo’s half-brother

The 1534 land registry record of Messer Lionardo di Bernardo di Lorenzo Ridolfi shows, without a shadow of doubt, that the “chasa ad Uso dosteria e beccheria posta nel chomune di Vinci insulla piazza del mercatale” (house for use as tavern and butcher shop, situated in the town of Vinci, on the market square) had been leased to Giovanni di ser Piero da Vinci for two florins a year. The building had existed for some time, at least since 1480, when, however, it was registered by the owner at that time as a simple dwelling. Within a few decades the house must have been renovated, to increase its value. In fact, at the time of sale it had already been transformed into a tavern-butcher shop and already leased to Leonardo's half-brother. As seen, it was bought by the Ridolfi, one of the Florentine families who had begun to invest their capital in the countryside around the city. The Ridolfi owned various properties, both within the castle and around Vinci: among these, the mill of La Doccia, located just outside the castle, along the road leading toward Montalbano, and the Ferrale estate, just before Anchiano. The numerous maps of the Capitani di Parte Guelfa pertaining to the territory of the community of Vinci show the Vincian countryside as dotted by the houses, farms, and mills of this family. The premises for use as "tavern and butcher shop" of the village of Vinci, whose management was given to Leonardo’s half-brother, remained the property of the Ridolfi until 1640, when with the marriage of the niece of senator Raffaello Ridolfi, it passed to the Da Bagnano family. Finally, with the extinction of the family in 1773, the building became part of the Masetti properties.

The inn rented by Leonardo's brother corresponds to the house that is located today on Piazza Leonardo da Vinci at address 22-24, next to the vaulted passage of the Androne Ciofi. The building itself is clearly recognizable in the detail of the castle of Vinci drawn on one of the late 16th-century maps of the Capitani di parte Guelfa. In the drawing, the last building of the village along the road running along the castle’s western bank is indicated as osteria (a tavern). Next to it we can recognize the small arch of the Androne Ciofi, where the road leading to San Pantaleo starts. After the last building of the village, which at the time was the osteria of the Ridolfi, the millrace and the municipal mill are perfectly distinguishable, the latter of which was also managed by Leonardo's family. In essence, therefore, the youngest of Leonardo’s half-brothers, who probably lived with his older brother Guglielmo in the house at Anchiano, was running the Ridolfi family’s butcher shop, located in a strategic position with respect to the road toward Montalbano. For those coming from Anchiano, the tavern was located right at the beginning of the village of Vinci. For those who had to proceed north from the Empolese valley floor, the premises of the tavern were the last stop and point for refreshment of the town, before taking the road toward the Montalbano passes. As for the context of Giovanni’s management of the tavern, the wine usage could avail itself of the family vineyards’ production, while the butcher shop’s meat production no doubt ended up partly in the refreshment service, as well as in retail sale. The butcher shop activity must have been greatly facilitated by the presence nearby of millrace waters—of the mill that was managed at that time by the da Vinci family—and of the underlying drainage ditch. The cycle of the processing of meats for slaughter required, in fact, a large amount of running water. Giovanni also possessed, by the way, the two plots of land "behind the ditch". 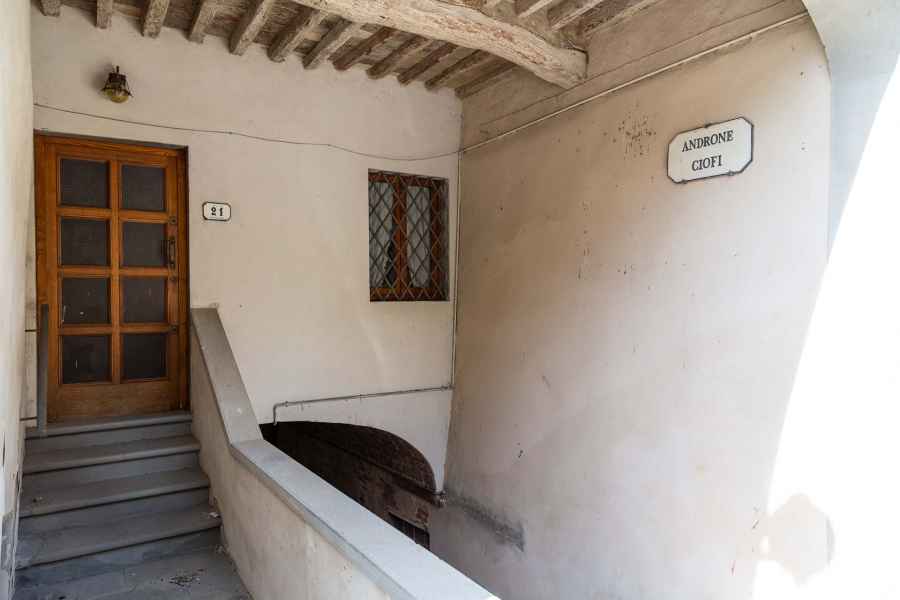 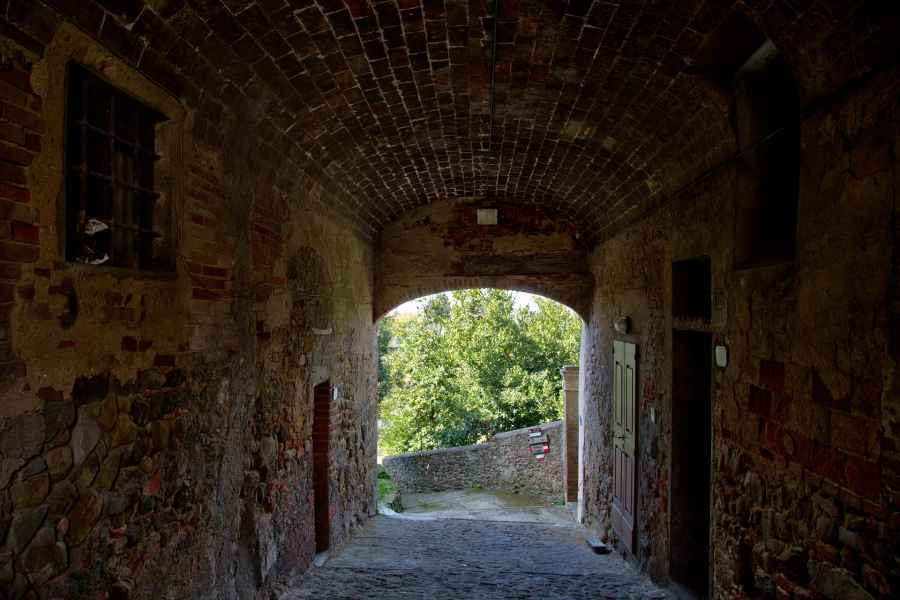 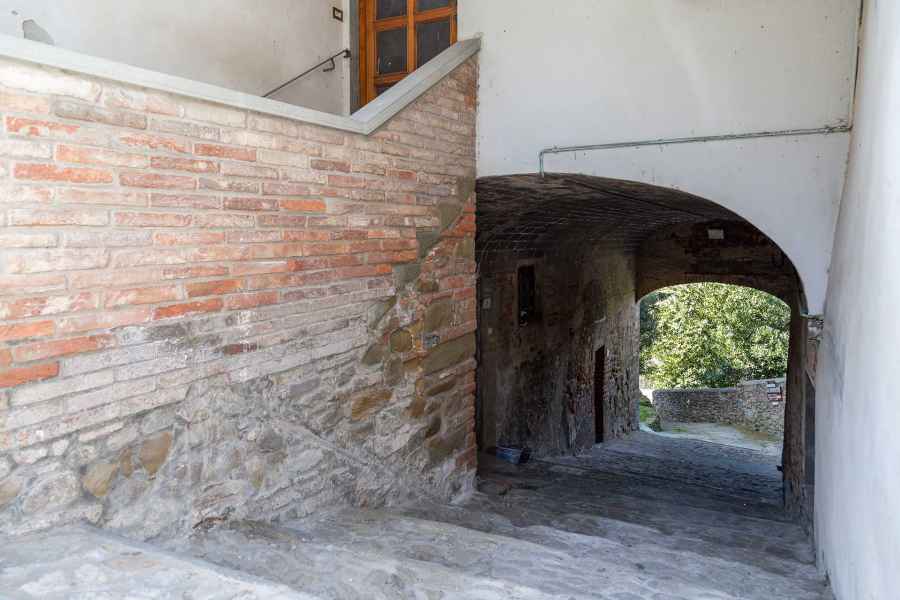 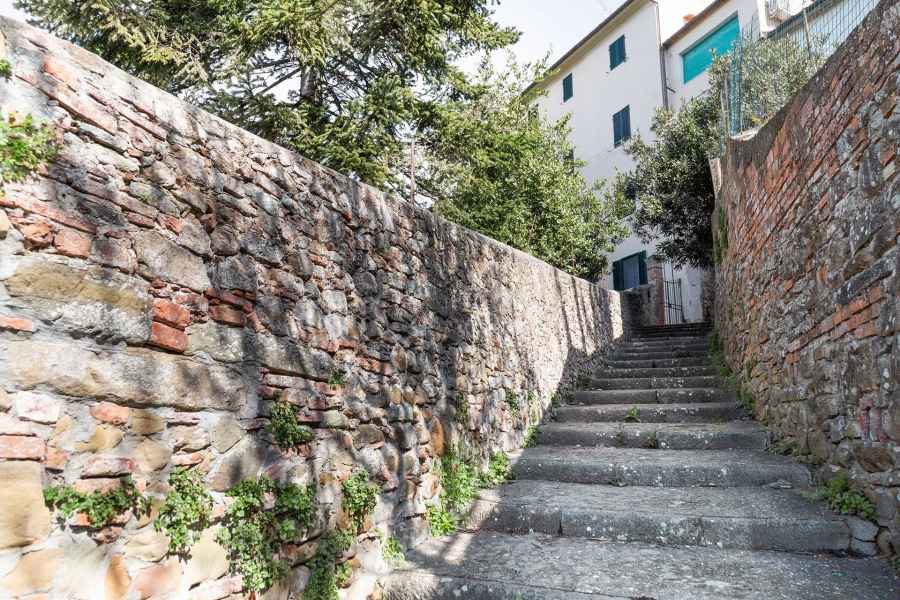 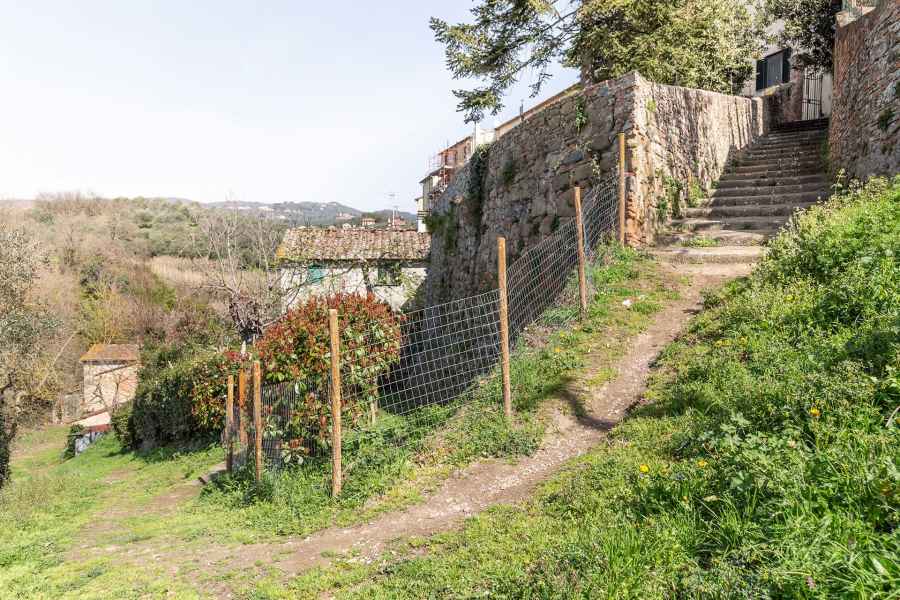 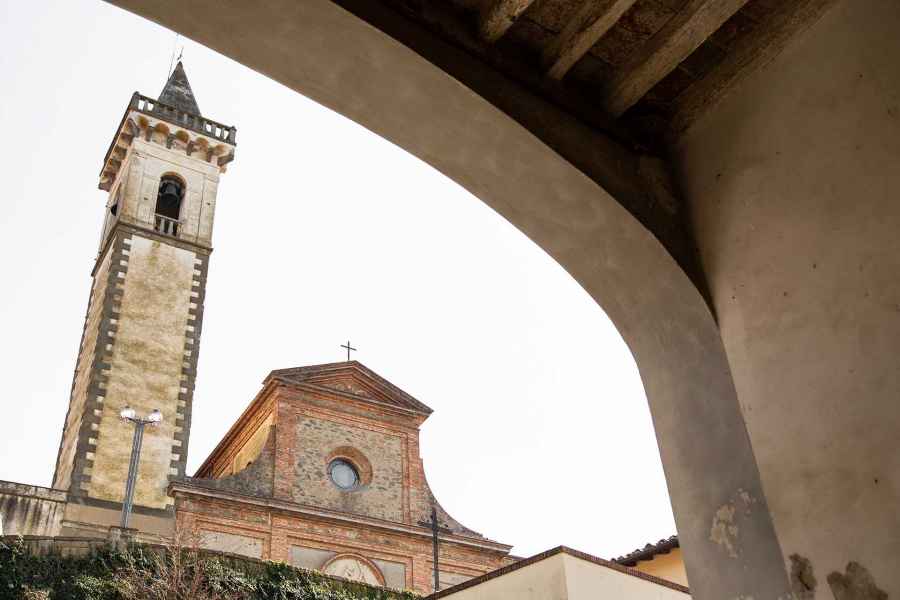