At the end of Piazza Leonardo da Vinci, where the road begins that goes up toward the Montalbano passes, was the ancient mill of the castle which became, after Vinci entered into the framework of Florentine administration, the municipal mill. The recent discovery of a document conserved in the State Archives of Florence informs us that Leonardo was in Vinci in May 1478. He was already working in Florence, in the workshop of Verrocchio, and it was only a few months previously that he had obtained his first prestigious public commission: the assignment to paint the altarpiece of the Cappella di San Bernardo in the Palazzo Vecchio. The short sojourn in his native village had been requested by his family, who wanted him to be present at the event through which the town of Vinci granted them the municipal mill. The perpetual lease document, in fact, contained a clause that concerned Leonardo specifically as figlio spurio, "illegitimate son". Some traces still remain of the mill, at the small valley facing onto the ancient castle moat, into which the waters of the millrace flowed to power the complex of hydraulic works for the village of Vinci.

Leonardo and the 1478 concession of the mill

On May 3, 1478, the municipality of Vinci drafted the contract of declaration, by which it granted Francesco di Antonio di ser Piero da Vinci pro se et aliis the mill that was located at the foot of the castle. Francesco was Leonardo's uncle; he was not married and lived in the family home in the village of Vinci. The concession is the first testimony of the municipal mill located on the banks of the village, at the point where one exited to take the road toward Montalbano. Leonardo also was present at the conclusion of the concession. It is likely that the family had requested Leonardo’s presence in Vinci on that occasion because of the special clause in the contract, being a concession in perpetuum, that would have included, in the event of extinction of legitimate heirs, also non-legitimate descendants. As things turned out, this concern of Leonardo's family was rather ephemeral, and the legitimate descent of Leonardo's father, as is known, proved quite numerous. After some 20 years, in 1497, the municipal mill was still in the hands of Leonardo’s uncle, Francesco.

The municipal mill in Leonardo’s time

The municipal mill of Vinci is mentioned for the first time in the Statutes of 1418. At the time of drafting the lease, the da Vinci family is described with these words: “molendino dicti comunis cum foveo et goraio et aliis suis pertinentiis et situm ipsius molendini et pro edificando et ad conficiendum aliud molendinum sive factorium positum apud dictum castrum vincii in populo sancte crucis”. The concession included the use of the mill, the millrace that fed it, and the drainage ditch. However, as was customary, the concession provided for an intervention to improve the asset acquired by the concessionaire: in this specific case it was desired that there would be a construction of a second works, whether mill or oil mill, also in the proximity of the castle. It is possible that the desired improvement with the stipulation of the contract of declaration in favor of the da Vinci family actually was achieved. At least since 1505, the municipality of Vinci had, on the castle moat, a mill with a single millstone insulla ghora de fossi di Vinci (on the millrace of the ditches of Vinci) and the fattoio da olio a acqua Apichato chol sopradetto mulino (water-powered oil press attached to the aforesaid mill). Whether the construction of the mill really did represent respect of the rule ad meliorandum in the contract of concession of the public mill to the da Vinci family, we do not know. Nonetheless, we can point out that one of Leonardo's half-brothers, Giovanni, had a concession since at least the 1530s for the premises adapted for use as tavern and butcher shop, which bordered right on the municipal mill. The sketch of the castle of Vinci drawn by the Capitani di Parte Guelfa shows the details of the system of canals that powered the hydraulic works of Vinci at the end of the 16th century. To the north of the castle a long canal, the goraio, captured the waters of the rio castellano, to power in succession first the mill of La Doccia, just above the castle, and then the municipal mill, in the village. The drawing shows the abundant flow from the goraio coming down from the west side of the castle, to arrive to the piazza del mercatale, the village square, turning left from this point toward the valley, alongside the last building of the village, marked as an osteria, or tavern. The millrace appears to feed two hydraulic works in succession, which could correspond to the municipal mill and the other works indicated in the 1478 lease (aliud molendinum sive factorium).

The archival documents allow us to locate exactly the system of the hydraulic works taken in concession and managed, starting from 1478, by the da Vinci family. They were at the bottom of the current Piazza Leonardo da Vinci, the ancient market square, at the point corresponding to civic address number 1 on Via del Montalbano. The road to Anchiano and then to the Montalbano passes started from this point. Next to the mill, in fact, stood the tavern-butcher shop owned by the Florentine family of the Ridolfi, also taken over by a member of the da Vinci family. Giovanni di Ser Piero da Vinci, the youngest of Leonardo's half-brothers, had been renting the premises since at least 1534. It is possible that the proximity of the artificial and natural waterways connected to the structure of the mill/oil mill favored the specific activity of Giovanni's butcher shop, the slaughter of the meat.

The municipal "press" at Via di Montalbano, 1

The village mill was still part of the municipal patrimony indicated in the community registry of declarations for 1829 and 1825 (casa del Fattoio, the house of the press). The 19th-century municipal "press" was later transformed into a public washhouse, and in recent times into public baths, while the millrace that descended from the northern part of the town was already covered over in 1825 to expand the initial section of Via del Montalbano (Piazzale della Fiera). Some ruins of the system of millraces are still partially visible at the point where we see the ancient ditch used for drainage for the hydraulic works.
Texts by
Silvia Leporatti / English translation by John Venerella
Related resources
Related places
Gallery 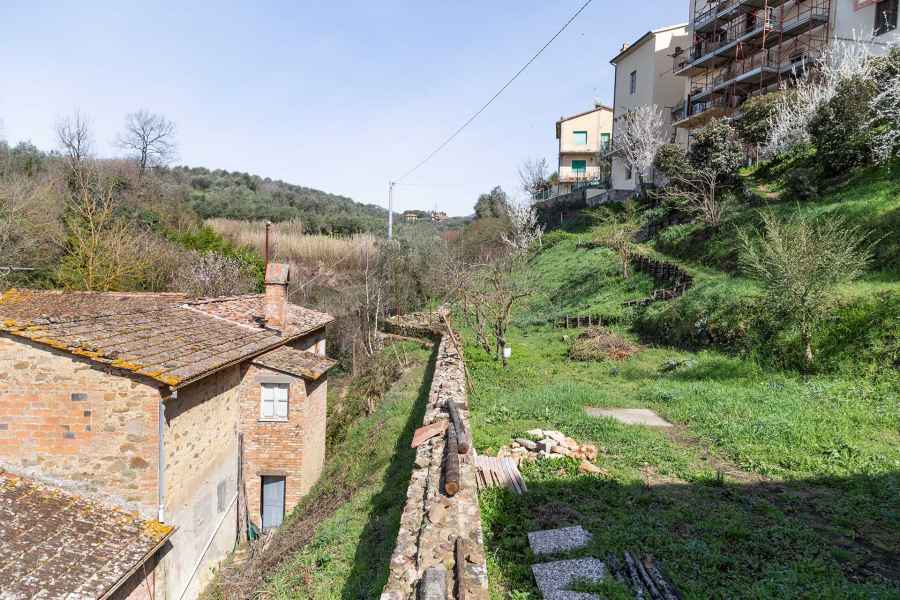 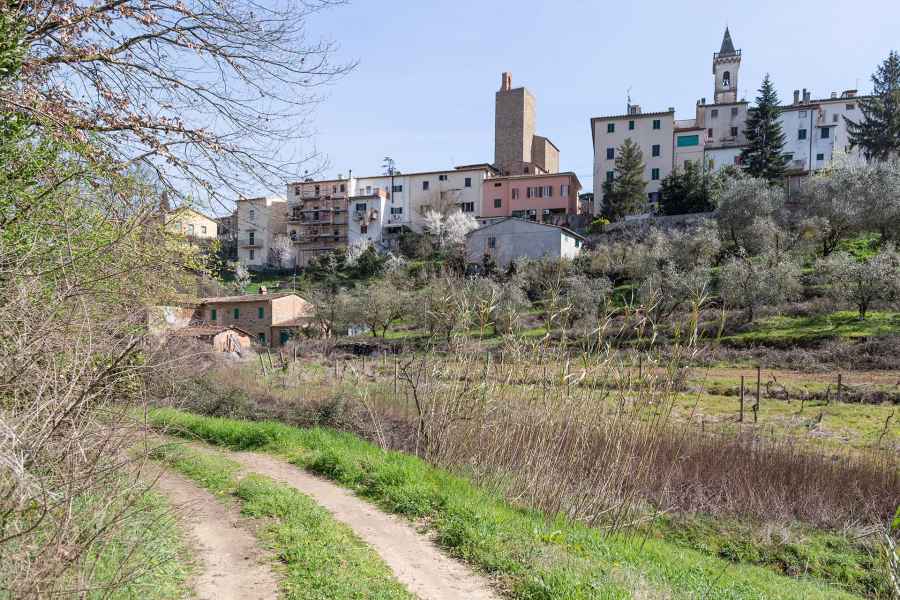 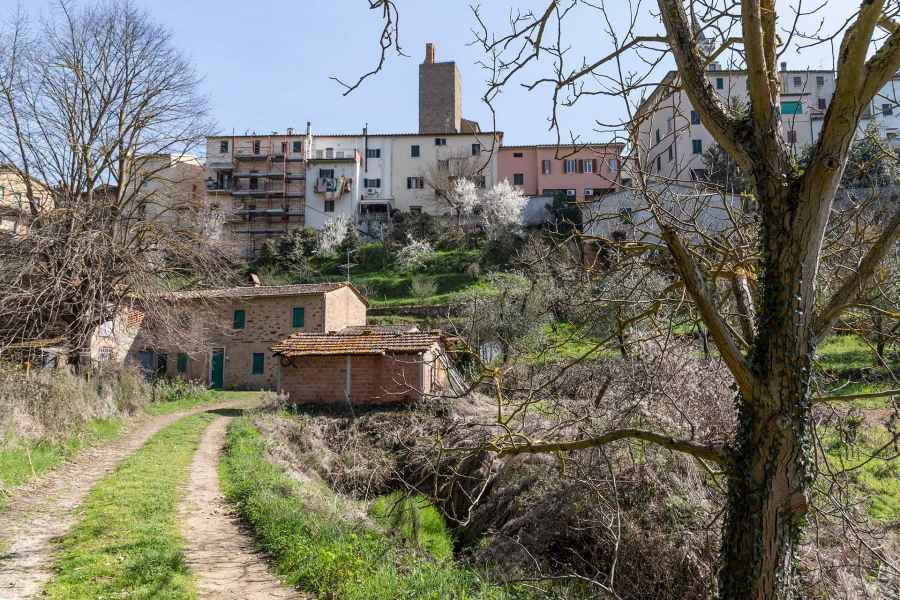