The hamlet of Anchiano is located a few kilometers from the village of Vinci and is known for the Casa Natale di Leonardo (Leonardo’s birth house), the Vincian 'place of memory' par excellence. Thanks to a recent restoration carried out in 2012, the Casa Natale today experiences a 'new ancient splendor,' having been enriched with modern technological tools for the communication and utilization of this special Leonardian place. Among these, a hologram of Leonardo, shown elderly and intimate, which involves the spectator in the recounting of particular moments, previously unseen, of his life. Or you can browse around the inside the Last Supper, in a high-resolution digital version. Finally, Leonardo Touch offers the visitor different and customizable thematic itineraries to learn about Leonardo's work in a different way. Leonardo's Birth House can be easily reached by car coming from Vinci and then following the Via di Anchiano. Additionally, there is a beautiful walking path immersed in the Vincian countryside, the same that was the backdrop of Leonardo's early years: the so-called Strada Verde (Green Road), one of the "Paths of the Genius," connecting the historic center of Vinci with the hamlet of Anchiano.

Anchiano between the Middle Ages and the Age of Leonardo

Gustavo Uzielli, one of the earliest Vincian historians, dealt with the most ancient history of the small hamlet, in a non-occasional way, at the end of the 19th century. The locality Ferrale, in Anchiano, is mentioned for the first time in 1332, in relation to the so-called "lords of Anchiano," whom Uzielli, proposing anew the version already provided by Repetti, identified with a branch of the Adimari. According to researcher Enrico Fiumi, the names of the mentioned personages from Anchiano, who owned lands at Ferrale, San Pantaleo, and in Val di Streda, belonged to the homines yet linked to the noble Guidi family. In the 16th century a large part of the area of ​​Anchiano, with the Ferrale and its many mills of Balenaia, were part of the possessions of Ridolfi, a Florentine family that since the time of Leonardo had acquired parts of the castle and lands around Vinci, including the Tavern-Butcher Shop of the village and the mill of La Doccia.

Anchiano and the family of Leonardo da Vinci

The small hamlet of Anchiano is located just above the historic center of Vinci, on the slope of Montalbano defined by the watercourses of Balenaia and the Quercete that fed numerous mills in the time of Leonardo. The landscape we can admire today, marked by hillside slopes cultivated with vineyards and olive groves, has remained very similar to that of Leonardo's time. In this area, which was part of the community of Santa Lucia in Paterno, the da Vinci family had several properties, including a farm with a "house for workers and for the lord" identified as the rustic building of Anchiano known today as the Casa Natale di Leonardo da Vinci (Leonardo da Vinci’s Birth House). The identification of the farm house of Anchiano, which certainly belonged to the da Vinci family, as the house where young Leonardo was born in the spring of 1452 has its roots in a strong local tradition. The very origin of the popular conception, in the wake of interest in Leonardo’s biography, and especially regarding his youthful years—consider Sigmund Freud’s Leonardo da Vinci, A Memory of His Childhood—has been the subject of analysis in the context of historical research begun in the last century around the theme of the "Birth House."

The first official version reporting Leonardo's birth in Anchiano is found in the renowned Dizionario geografico of Emanuele Repetti (1843-45), supporting what was learned from the owner of the house at the time, the count da Bagnano-Masetti. But it was only during the mid-1900s, during the renovation of the building, that we obtained the first real archival research, by Renzo Cianchi, the first librarian of the Biblioteca Leonardiana. To the Vincian scholar we owe, first of all, the information allowing identification of the Anchiano cottage with the "house for workers and for the lord" present in the da Vinci family patrimony since about 1482. It was bought by Ser Piero, Leonardo's father, probably to turn it into a resting place for those taking the road from Vinci to the Montalbano passes. In the testamentary arrangements of 1506 following the death of Ser Piero da Vinci, which occurred in 1504, the "poderetto" (little farm) of Anchiano was composed of a house in ruins and "una chasa da oste principiata," meaning an innkeeper’s house, just begun: the project seems to have been for a tavern strategically placed along the road to Montalbano. Following the changes of ownership it is clear, however, that the Anchiano house remained for a long time in the branch of the family of the descendants of Guglielmo da Vinci, one of Leonardo’s two half-brothers. Guglielmo lived until his death in the house of Anchiano. It was there that in 1542 he made his will, indicating the church of Santa Lucia in Paterno for his place of burial. The Anchiano house remained in possession of Guglielmo’s lineage until the second generation: one of the nephews yielded the entire farm, so that it went to aggrandize the estate of the grand duke. Finally, in 1645 the property was sold to the family of Count da Bagnano-Masetti, the same family who gave Repetti the 19th-century version of Leonardo’s birth in Anchiano. The series, non-extensive, of passages of ownership of the house that separate the testament of Guglielmo da Vinci from the purchase by Count da Bagnano-Masetti, so well documented by Cianchi, makes clear the origin of the local tradition and explains its power. A tradition, that of the birth of Leonardo in Anchiano, first familial and then local, which matches up with circumstantial elements, certainly not decisive, but surely important, such as the recent analysis of the names of witnesses at Leonardo’s baptism. Several names of the godfathers and godmothers present at Leonardo’s baptism, as reported by the notation penned by his grandfather Antonio, coincide with names taken from the list of parishioners of the community of Santa Lucia a Paterno, according to a document from 1440 recently brought back to light. The personages who attended Leonardo’s baptism, therefore, lived in the neighborhood around the house of Anchiano, which also, as mentioned, was part of the community of Santa Lucia a Paterno.

The Da Vinci house in Anchiano: historical restoration and showcasing

Some structural elements of the Anchiano farm confirm a possible dating to the late 15th century. If, in fact, the house passed to Leonardo's family only around the year 1482, it has been visible in documentation since at least 1427. The first descriptions of the building speak of a simple "house for workers," which would subsequently be flanked by a second building. This addition dates back to 1457, when the building was already noted as being composed of two units, and described as a "house for workers and for the lord." According to researches by Cianchi, the works of improvement were not completed, and when, towards the end of the century, the house was bought by Ser Piero da Vinci, it was still composed of only those buildings, finished only at the ground floor level. Following restoration, the two parts became clearly distinguishable. According to Cianchi, the portion corresponding to the room with the hearth must have corresponded to the first nucleus of the new factory, which was set against the older, simpler "house for workers." The typology of the fireplace is, among other things, comparable with specimens used in the Tuscan countryside between the end of the 15th century and the beginning of the 16th century. The scholar’s archival research was designed, in fact, to provide direction for the restoration project, which was supposed to "bring to light the ancient structure; and follow the traces of this in order to reduce the whole to its original, more modest proportions." In fact, in 1952, some "non-original" external and internal superstructures were demolished, in order to highlight structural and architectural details that could be traced back to the period when the da Vinci family purchased the house. Some of these details can be appreciated even today, such as, for example, the family crest in pietra serena that must have been placed on the facade by Ser Piero da Vinci around the year 1482.

The house at Anchiano became Leonardo da Vinci’s "place of memory." It was inaugurated in 1952 in the presence of the highest institutions of the Republic, making official the recognition of the Leonardian site. Certain aspects of the restoration project were probably due to the political and cultural climate of the time. After the war, the "spirit of reconstruction" that informed many of the Tuscan administrations was expressed at every level, including the search for the historical roots of the new Republic of Italy. It is in this same context that one can interpret the construction of the case della memoria (memorial houses), inaugurated shortly thereafter, in 1957: the Casa del Pontormo and the Casa di Giovanni Boccaccio in Certaldo. Today, the Birth House of Leonardo in Anchiano is a genuine cultural pilgrimage destination, and is part of the Associazione Case della Memoria.

The new museum between technological innovation and Leonardian landscapes

Following the last, important restoration project directed by Daniela Lamberini (University of Florence), the Museo della Casa Natale di Leonardo in Anchiano is once again usable, through the languages ​​of the most up-to-date museum communication. The audio-visual narration Leonardo da Vinci: un genio si racconta (Leonardo da Vinci: a genius tells his story) makes use of 3D technology, immersive technology that allows you to experience, through the protagonist’s own story, his most intimate and personal universe. A life-size hologram of Leonardo comes alive: the one speaking is an old and tired Leonardo, who from his last home in Amboise, France, turns his gaze to the past and traces episodes, studies, and fragments of life that bound him to this land. Above all, he brings to life his connection with these places, the variegated landscapes of Montalbano, which were for him a source of inspiration, in his many fields of interest in science and art. Leonardo Touch is an interactive multimedia application that allows you to interact directly with the pictorial and graphic work of Leonardo, making use of different thematic paths and different possibilities for further study. In the adjacent farmhouse, you can admire the high definition digital version of the Last Supper in 1:2 scale. The technology used makes it possible to explore the painting through two modes of research, one making use of gestures, the other, a touchscreen, by which you can activate various thematic itineraries into further knowledge, for example, centering on iconography, on art history, or on the history of the restoration of the work. The opening of the new itinerary makes it possible, thanks to the quality of the latest restoration project, to take advantage of totally new glimpses of landscapes of great historical value, considering how little they have changed in relation to the Vincian landscape that Leonardo traveled through, lived in, and drew.
Texts by
Silvia Leporatti / English translation by John Venerella
Related resources
Related places
Gallery 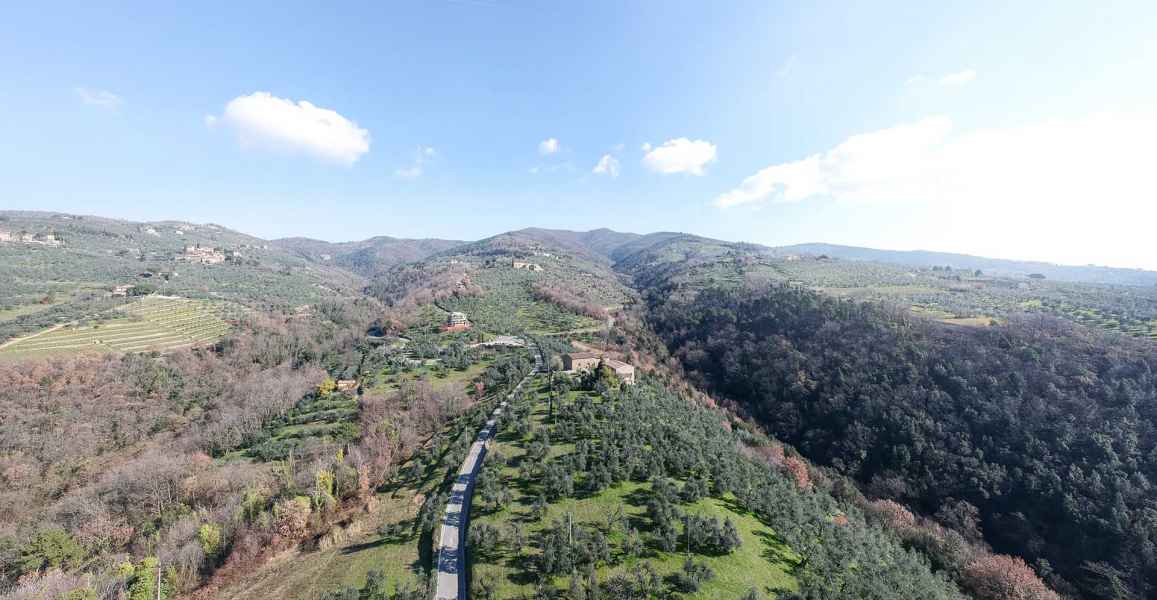 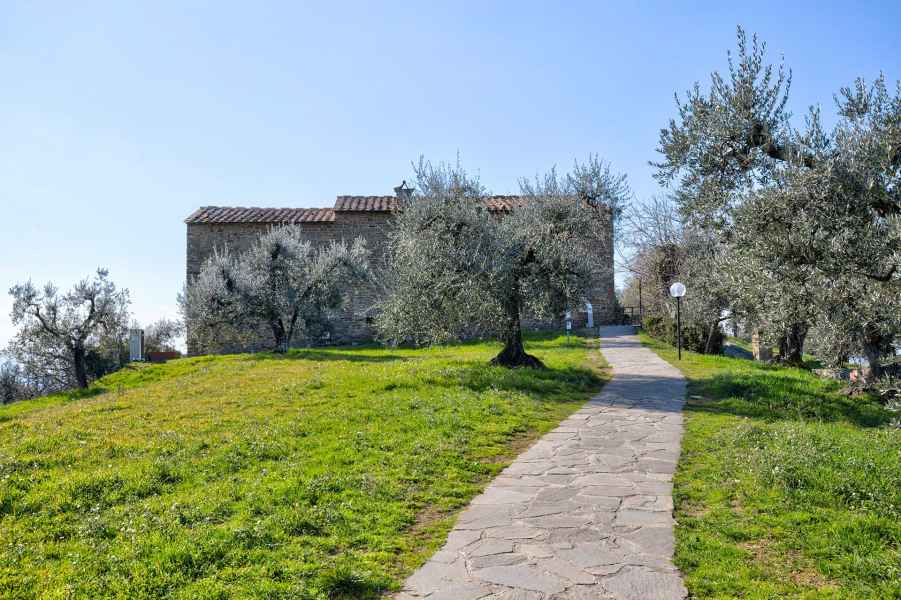 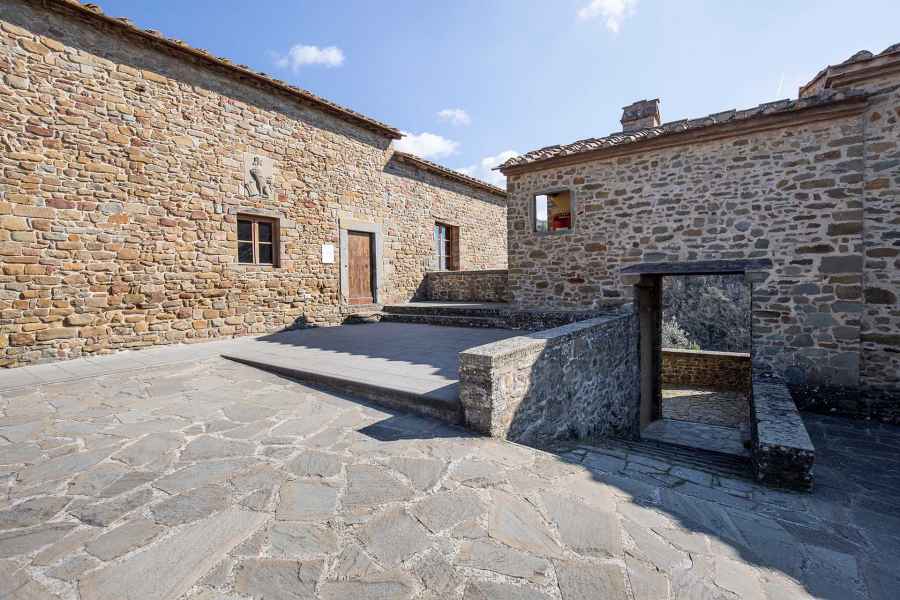 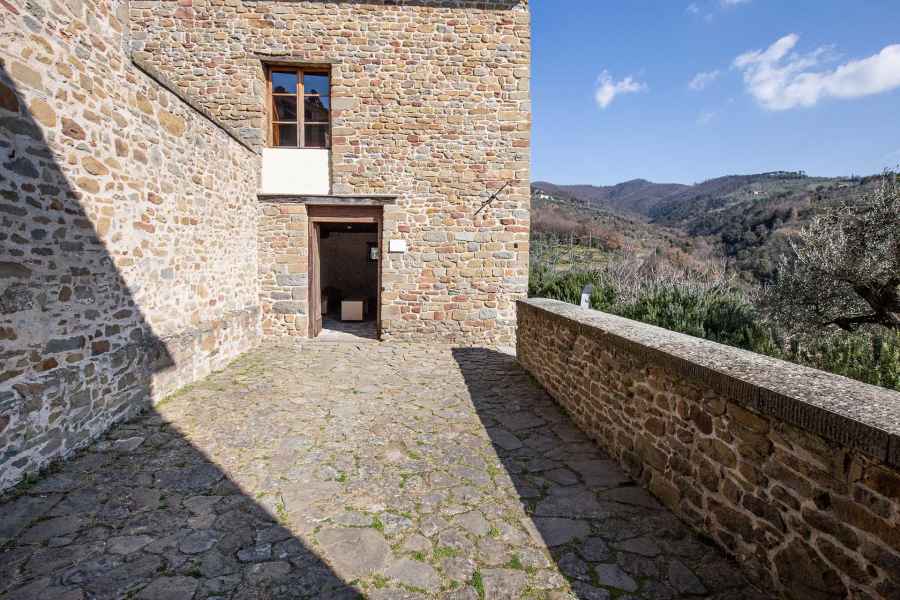 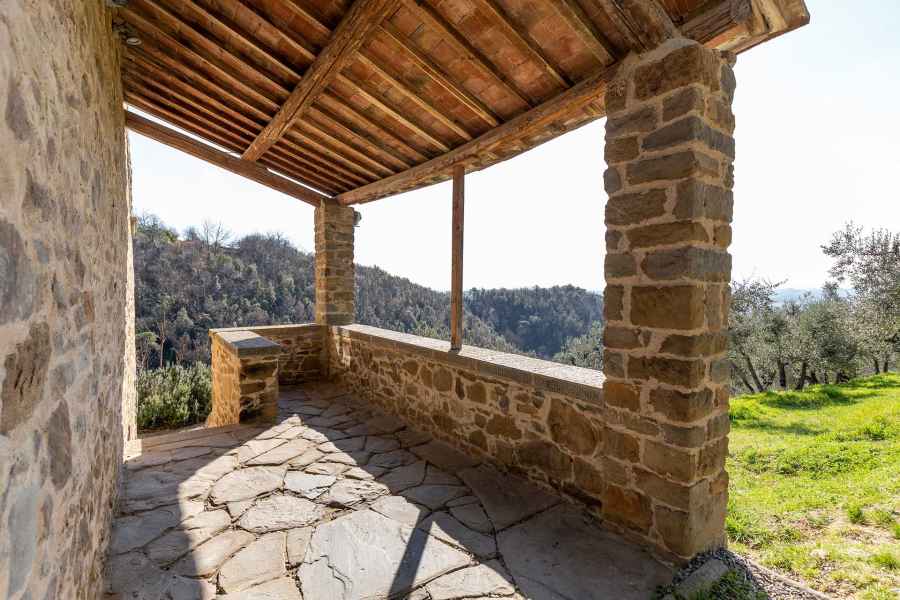 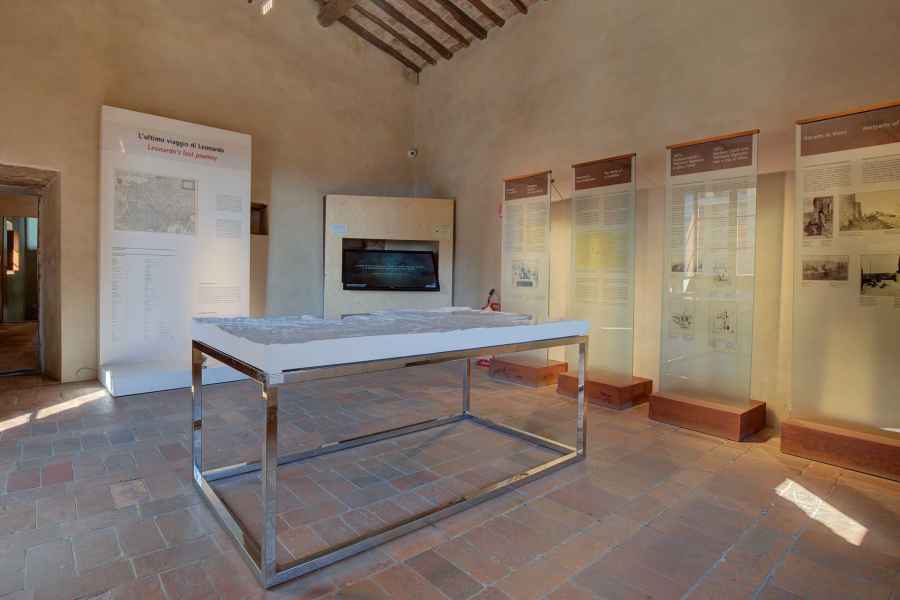