Leonardo drew the village of "montaione" on map RLW 12278. He depicted it as a castle surrounded by turreted walls and situated it in the upper Val d'Egola, near the castles of Gambassi, Tonda, and Santo Stefano. The castle of Montaione must have appeared during Leonardo’s time still in that form, the same aspect in which it is represented in a rare 15th-century watercolor conserved in the State Archives of Florence. The detail of the watercolor shows the village of Montaione surrounded by defensive walls equipped with nine wall towers and two fortified gates.

Documentation of the castle of Montaione appears in written sources only after the year 1220. In reality, the locality "Montaione / Monteaione" already appeared on two occasions during the previous century. A document from the year 1113, in fact, mentions the place called "Montaione" for the first time, while in an act dating from 1196, some personages called de Monteaione appear as witnesses. It would appear, therefore, that even by the end of the 12th century, there was no fortified village on the site, which, nonetheless, was already being referred to as "Montaione". At the time, this place hosted a small population center: a village or a simple cluster of houses. The recent genealogical reconstruction of the local domini, who since 1196 called themselves "de Monteaione", sheds some light on the times and circumstances that led to the foundation of the castle. The personages in question, in fact, had been closely linked since the beginning to the city of San Miniato. During the 13th century, this family held public offices in the most important villages of the Valdelsa (in addition to San Miniato, San Gimignano, Colle Val d'Elsa, and Volterra itself). Over the course of two generations, the "de Montaione" lords, even while continuing to be mentioned as originating from the eponymous castle, began to show indications of their origins from San Miniato ("de Sancto Miniate"). From the second half of the 13th century the lords of Montaione had, in fact, become part of the urban life of the greater village, becoming in all respects "citizens" of San Miniato. This link between the de Monteaione family and the strong imperial castle, which took shape during the decades of its ascent as the ordering center of a vast districtus, constituted an important indication of the initiative to fortify the Montaione site with a castle.

The foundation of the castrum of Montaione

San Miniato proceeded to the construction of its districtus, subjugating, from the early decades of the 13th century, many of the castles of the Val d'Egola controlled, at the time, by the bishop of Volterra. Among these, the castles of Barbialla, Collegalli, Tonda, and Santo Stefano. The site of Montaione was located right on the border of the area subjected to the diocese of Volterra, on which San Miniato had placed its attention, and which contended for the town of San Gimignano. For this reason it is very probable that the municipality of San Miniato had in any case facilitated the action of the de Monteaione lords, to whom we must attribute the initiative to fortify the place called "Montaione" with a castle. It was therefore an action planned jointly by all the subjects who, during the first decades of the 12th century, had an interest in founding a new fortified village, the castrum of Montaione (1220).

Leonardo and the 16th century watercolor of the castle of Montaione

The building fabric of the current town of Montaione allows us to imagine the shape of the castle. The medieval settlement can be recognized in the layout of the central blocks of the current historical center. These are ordered by three longitudinal road axes and divided into regular segments by the minor, orthogonal roads. In the thus described network, one can recognize the sequences of the regularly-shaped lots destined for various uses of the newly founded village: portions to be used for construction of private houses or public buildings, or spaces to be left free for public use (the piazza). The regular Montaione layout is a confirmation of its origin. Like many second-generation castles, the project referred to is on a rational foundation, with a simple layout, based on the subdivision of a regular geometric space into residential spaces, service roads, and provided with a central public space, a piazza, obtained simply by leaving free a part of the central block. The same type of "urban" layout can be found in the historic center of Gambassi, corresponding to the site of the castrum novum, also the fruit of a founding project carried out in the last quarter of the 12th century. An image of how the castle of Montaione could have looked, as it was also represented by Leonardo in the early 16th century, can be observed in an exceptional drawing of great detail, a 16th-century watercolor, conserved in the Carte Strozziane collection at the State Archives of Florence. The map represents a bird's-eye view of the village of Montaione seen from the west. The five long urban blocks defined by the streets running parallel from the western gate area (Porta Guelfa) to the eastern end of the castle are perfectly recognizable. At this point Porta Fiorentina is drawn almost frontally: it is the best fortified, with merlons and perhaps a vestibule. The wall circuit, on an oval plan, is punctuated by nine wall towers, three on the northern side and five on the southern side. For six of these towers, we know the name by which they were called at the end of the 14th century: Torre dell’Infrantoio, Torre del Merlo, Torre del Lione, Torre di Belvedere, Torre Nuova, and Torre di Parentella. At the center of the blocks, the space saved from the construction of the houses was left for the castle square, equipped with public well, located in front of the façade to the church of San Regolo. The castle must therefore have included the blocks facing the current streets named for Chiarenti, S. Ammirato, and Cresci, excluding the portion of the town around the current Piazza Branchi, an expansion certainly posterior to the 14th century. The Montaione castle in the 16th century watercolor, therefore, corresponds to the dwelling area that Leonardo saw and drew, still defended by its curtain wall, its towers, and its fortified gates.
Texts by
Silvia Leporatti / English translation by John Venerella
Related resources
Related places
Link esterni
Gallery 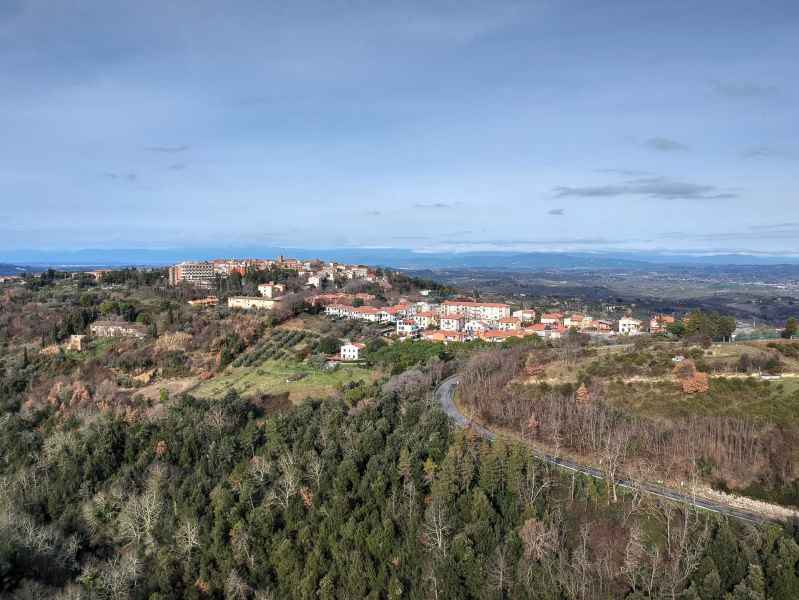 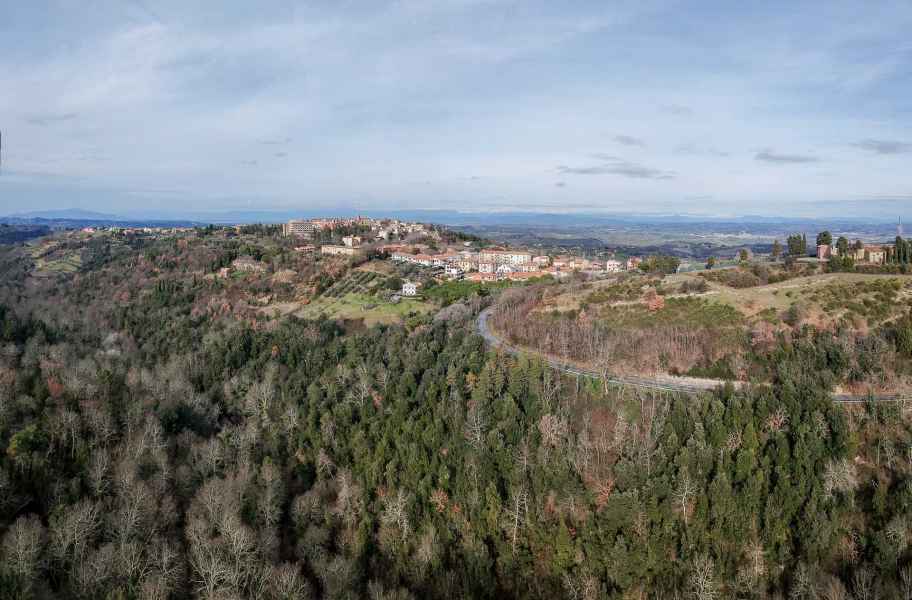 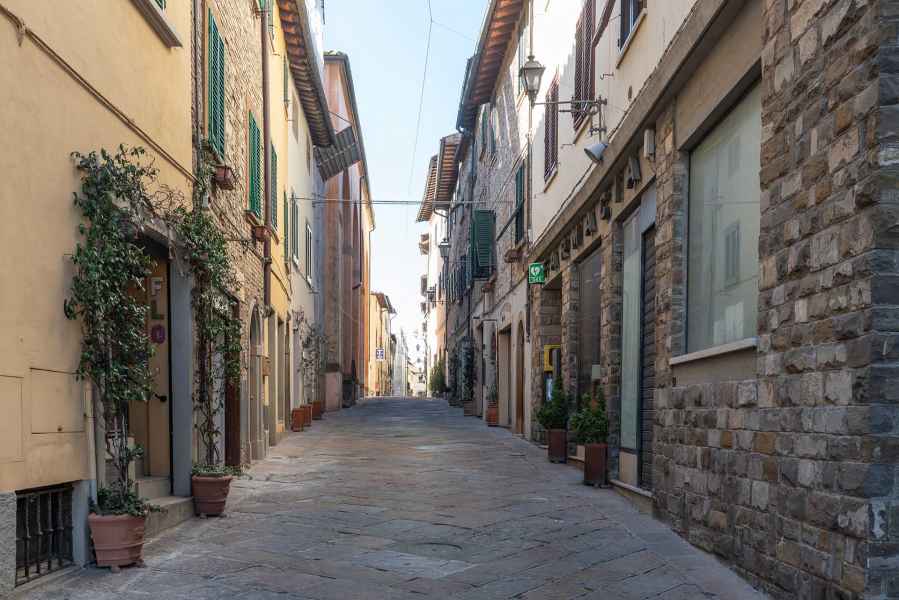 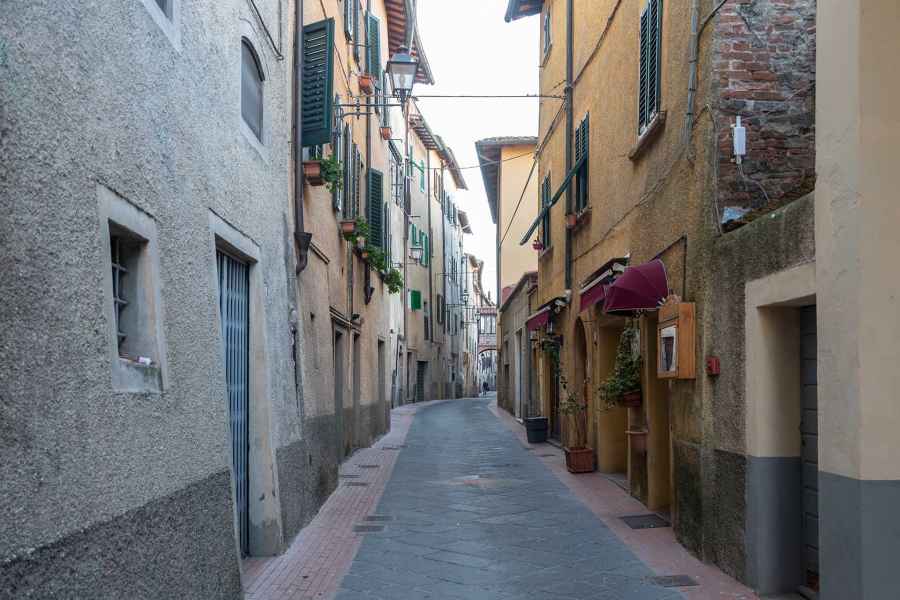 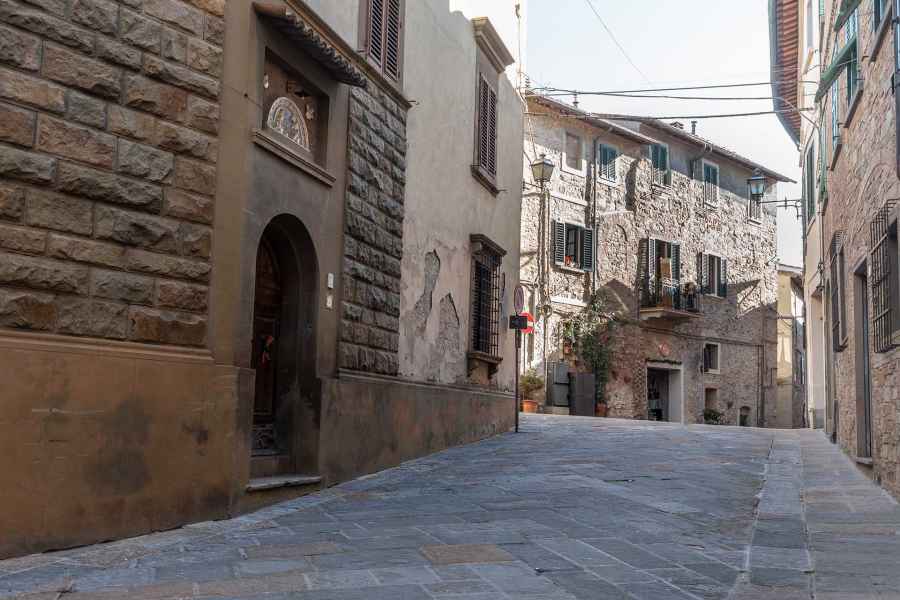 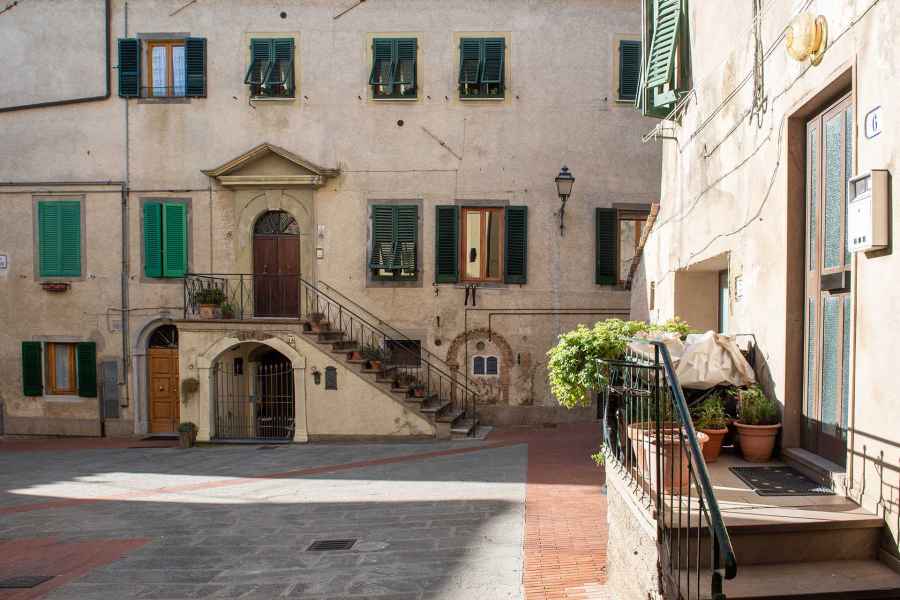 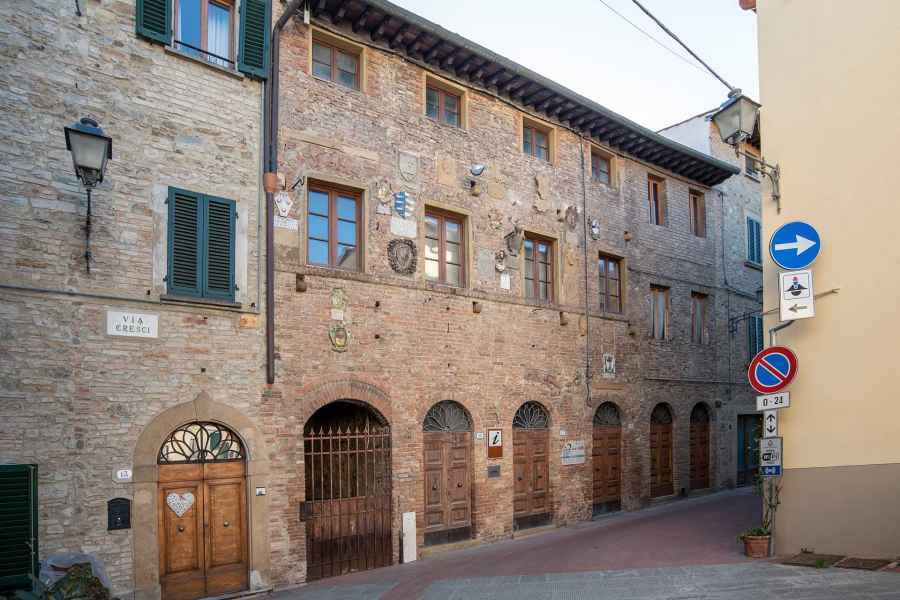 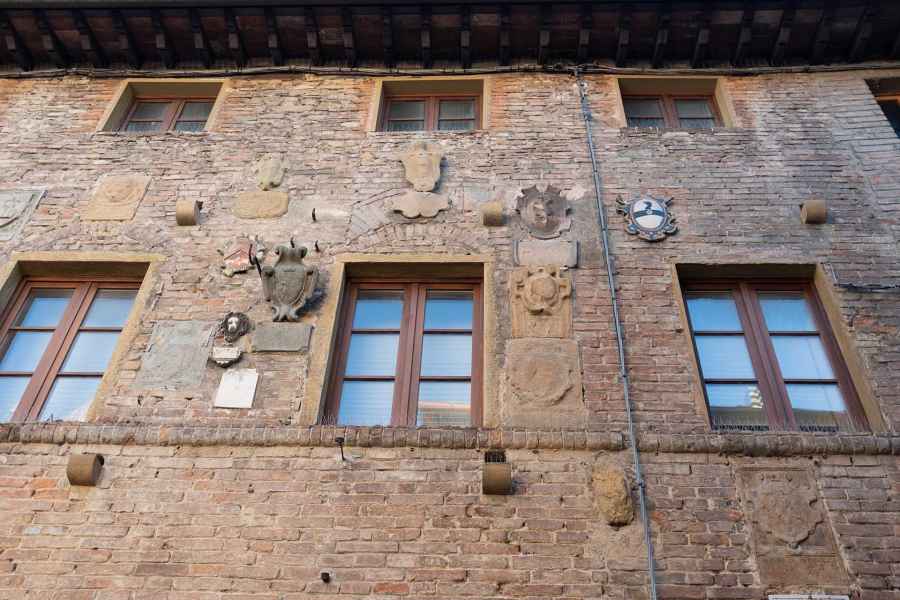 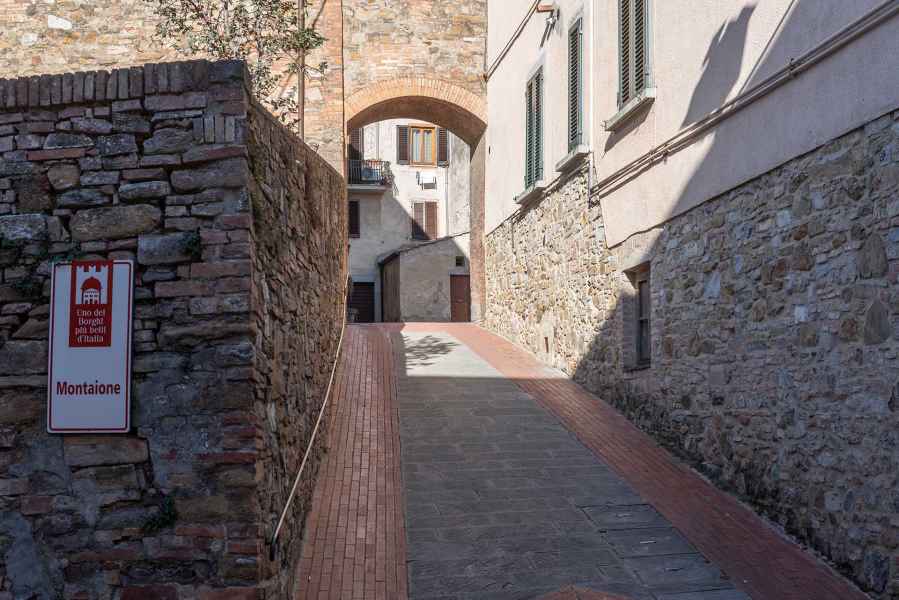 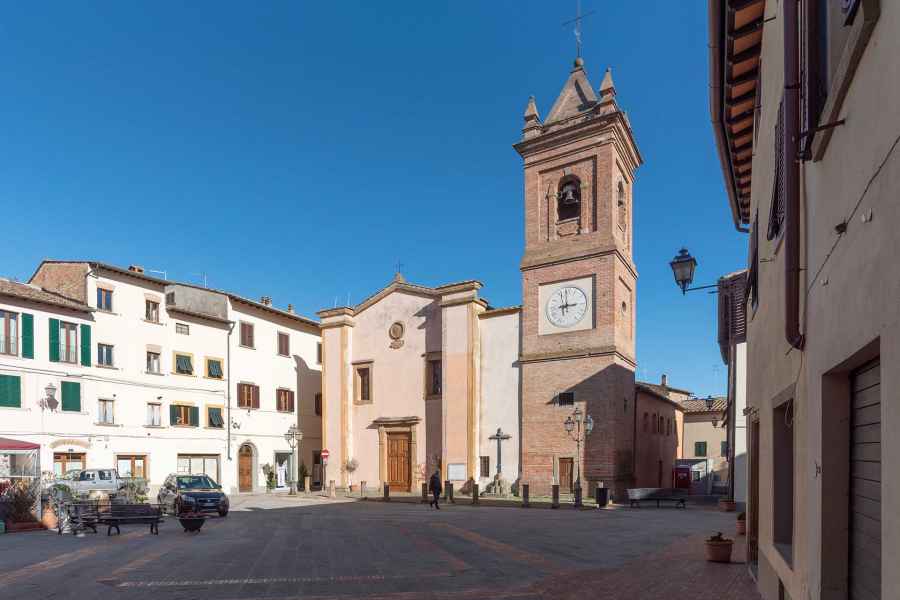 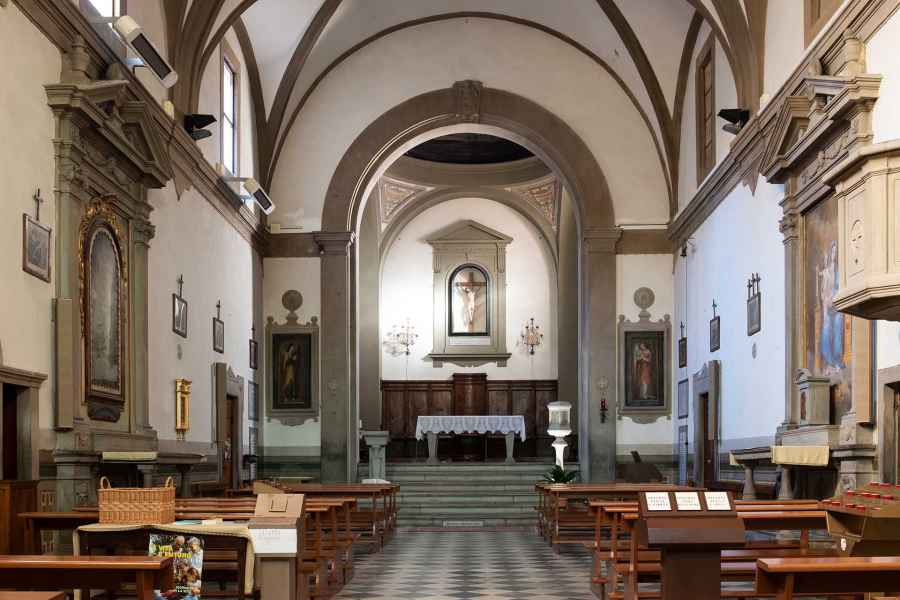