The small fortified village of "collegale" drawn by Leonardo on the map RLW 12278 between the Egola and the Era, is to be identified with the castle of Collegalli or Collegarli, as it is mentioned in written sources from the 12th century onward. The site is to be identified with the hill occupied today by the villa built by Duke Ferdinando Strozzi in the early 19th century, located a few kilometers northwest of Montaione. However, in the form in which it is represented by Leonardo, we recognize the aspect that it must still have had at the beginning of the 16th century, that of a small town with a wall circuit, as it must previously have appeared between the 12th and 13th centuries.

The first attestation of the castrum of Collegalli is from the beginning of the 12th century. In this document, dated 1123, Count Ranieri di Guido II of the Gherardeschi family, grants some of the rights he held on the castle of Collegalli to the bishop of Lucca. We know from this important noble family that as early as the 11th century, in addition to the vast possessions of maritime Tuscany (predominantly the Maremma Populoniese), it boasted rights on several castles of the lower Valdarno, and particularly in the low valleys of the Era and the Egola. Among these castles, in addition to Collegalli, were also Barbialla and Tonda. At the time the area was divided between the dioceses of Lucca and Volterra. As can be seen from the document under consideration, in fact, and as happened at the nearby castle of Barbialla, great secular and ecclesiastical lords laid simultaneous claims on these castles. These castles were used by the bishop and by the large noble families, as in this case, the Gherardeschi, who had their centers of influence beyond the zone, on the basis of rapidly changing interests and family affairs, especially during the course of the 12th century. Count Ranieri, in fact, whom we saw active in the castle of Collegalli in the first quarter of the 12th century, belonged to the branch of the Gherardeschi family that, in the second half of the 12th century, ended up concentrating its interests in Val di Merse, ceding almost all the castles of the Valdarno to the bishops of Lucca and Volterra. The relative power void left in the area, further augmented by contrasts between the incumbents of the two dioceses, favored the emergence of families of the lesser nobility, lords of the castle, often residing in the town from which they derived their family name. This is the case for the so-called "Conti di Collegalli", the lineage of lords we find active in the area from the last decades of the 12th century, directly linked to the ancient Gherardesca castle of the lower Val d'Egola.

These were personages belonging to the episcopal entourage, entitled with varying degrees of military dignity, who had succeeded in creating a local potentate centered on the possession of land, of one or more castles, and on direct control of the resident rural population. One of these personages was perhaps a certain Arrigo di Ranieri, of the Counts of Collegarli, who in 1183 donated to the monastic center of Altopascio some properties situated at Galleno, near Fucecchio, according to a document dated 1183, cited by U. Dorini, of which however the original source was not reported. The reference to the relationship of this lineage of castle lords with the territory around Fucecchio is nonetheless interesting, a relationship we find again, this time documented with certainty, a century later. We know, in fact, that in 1281, Fucecchio, during the military phase in which it was engaged against the nearby Santa Croce, hired, among others, as militias on the payroll, the Counts of Collegalli themselves.

From the second half of the 12th century the castle of Collegalli, also, was involved in the events relating to the Swabian presence in upper Tuscany. Like many other castles around San Miniato—for example, Barbialla, another fortified village of the Gherardeschi in Val d'Egola—also the castle of Collegalli was granted in fiefdom by the Emperor to the Pisan allies. The beginning of the 13th century, however, saw the unstoppable rise of San Minato: in the course of a few decades, all the castles of the area entered to become part of the territory of the powerful imperial castle with urban vocation, which became barycentric in relation to the other small demographic centers of the area. The history of the castle of Collegalli followed, therefore, that of San Miniato, which already by the end of the 13th century found itself in conflict with the expansionist ambitions of the city of Florence. In this area, singularly dense with castles old and new, strongholds, and other types of fortified residences, the maintenance of a settlement and of its fortifications represented, in the politics of the dominant future, the city of Florence, the maintenance of the balances of the populating of the area. On the other hand, the decision to definitively destroy and dismantle one of these centers meant drastically redefining the lines of that equilibrium. It happened, in fact, that in 1364, in the process of penetration into the territory of San Miniato, Florence ordered the total destruction of the castle of Toiano, including the houses. Florence also ordered that any items that could be useful for saving (objects, tools, food supplies) were to be transferred to Collegalli. Five years later, in 1369, following the definitive submission of San Miniato to the City of the Lily, Collegalli officially became part of the Florentine contado. From the administrative point of view, Collegalli, together with castles of Santo Stefano and Coiano, was included in the podesteria of Barbialla. In the Grand Duchy period, the podesteria of Collegalli and Barbialla was suppressed and reunited with the podesteria of Montaione, whose jurisdiction was expanded under Cosimo I to include fractions of the current municipalities of Castelfiorentino and San Miniato.

The castle of Collegalli in the time of Leonardo

The forms in which it was drawn by Leonardo, even at the beginning of the 16th century, reflect the oldest history of the center: a stately castle that had existed since at least the first decades of the 12th century. The Rationes Decimarum of the second half of the 13th century register, for the toponym Collegalli / Collegarli, three parish churches, all dependent on the parish church of Corazzano, in the diocese of Lucca: San Paolo, San Vito (later, Saints Vito and Modesto), and the church of San Michaelis de Castello, perhaps the castle church that today no longer exists. Actually only the two churches of San Paolo and San Vito are recognizable today—in very late architectural forms—in the two chapels of the tiny groups of houses of the homonymous farms (Podere San Paolo and Podere San Vito) that one meets along the white road that leads from Corazzano to the villa of Collegalli. The morphology and structures of the ancient fortified town, which was owned by the Orlandini family at the end of the 15th century, were completely erased from the villa built at the beginning of the 19th century by Duke Ferdinando Strozzi. Further changes were made by the subsequent owners, the Uzielli family. Today the villa, owned by the Burgisser family, has been transformed into a lodging.
Texts by
Silvia Leporatti / English translation by John Venerella
Related resources
Related places
Gallery 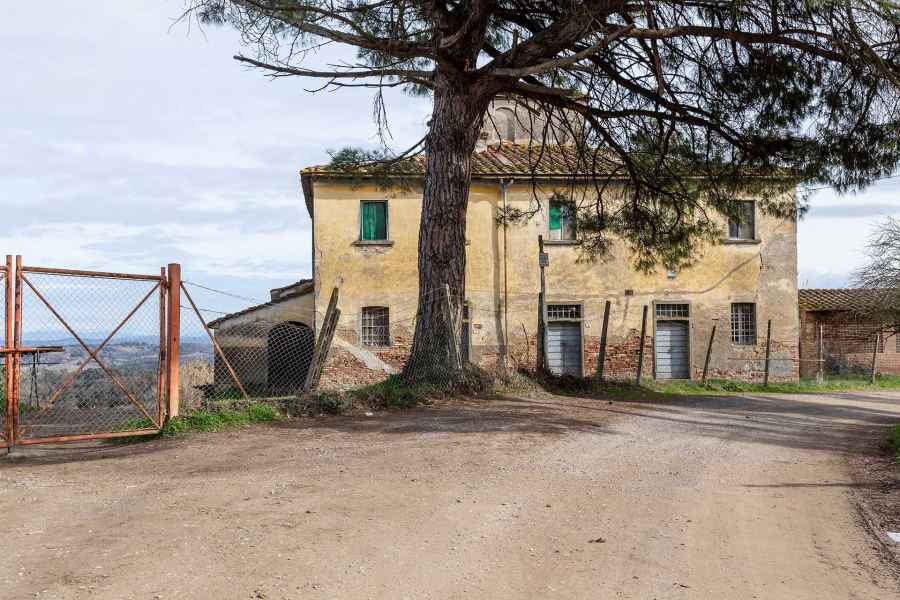 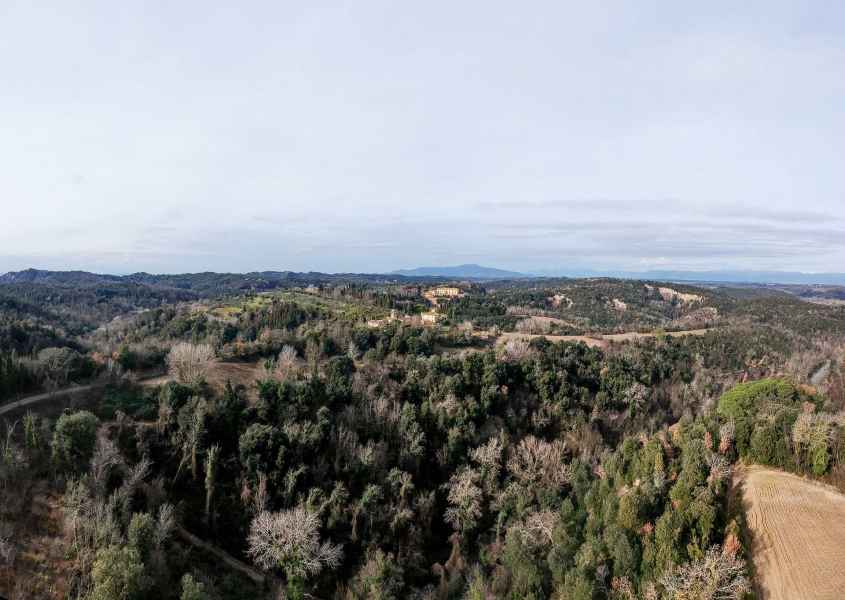 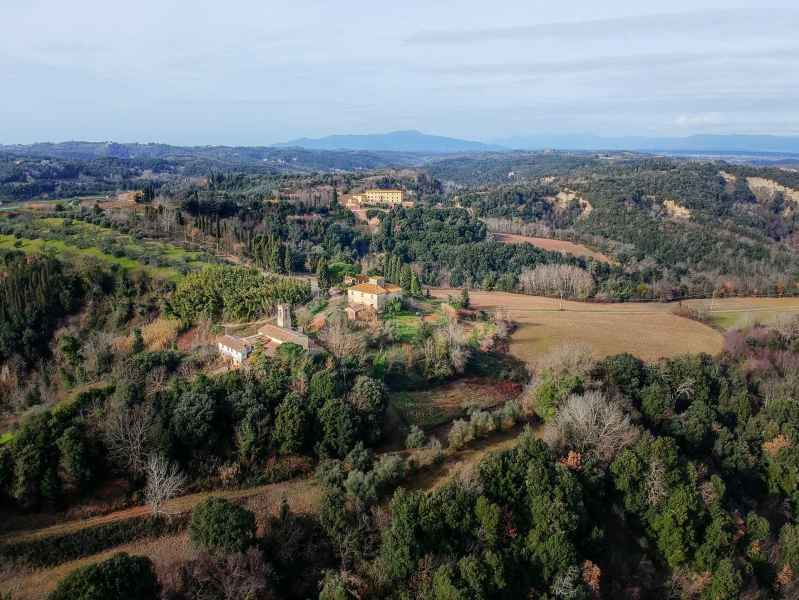 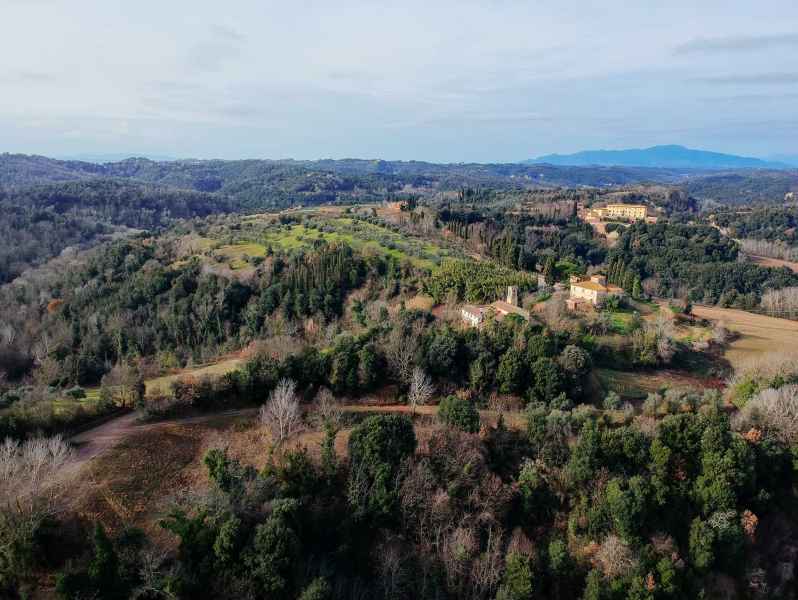 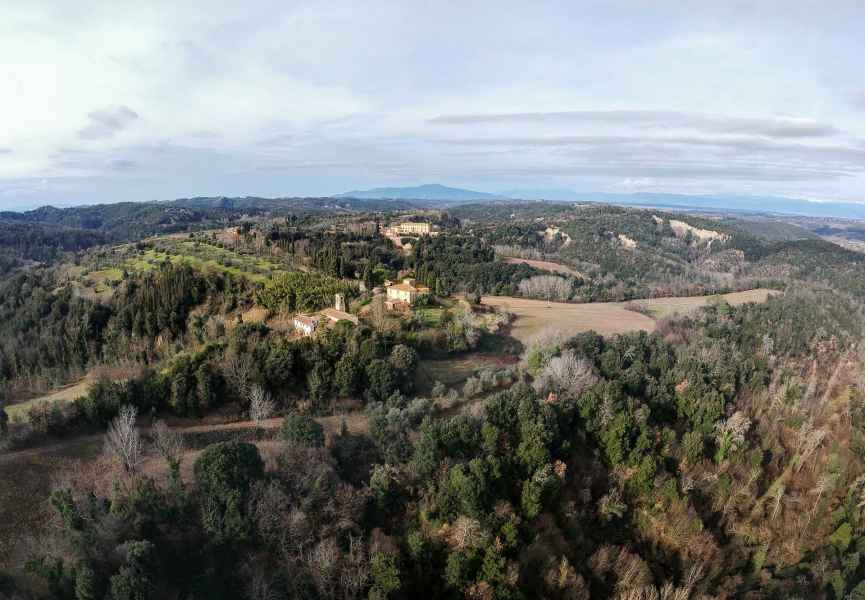 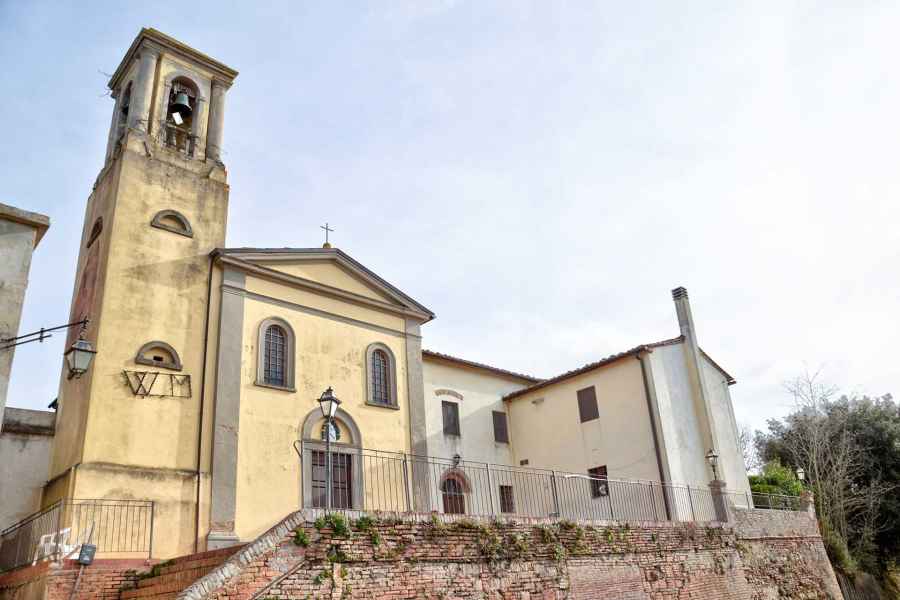 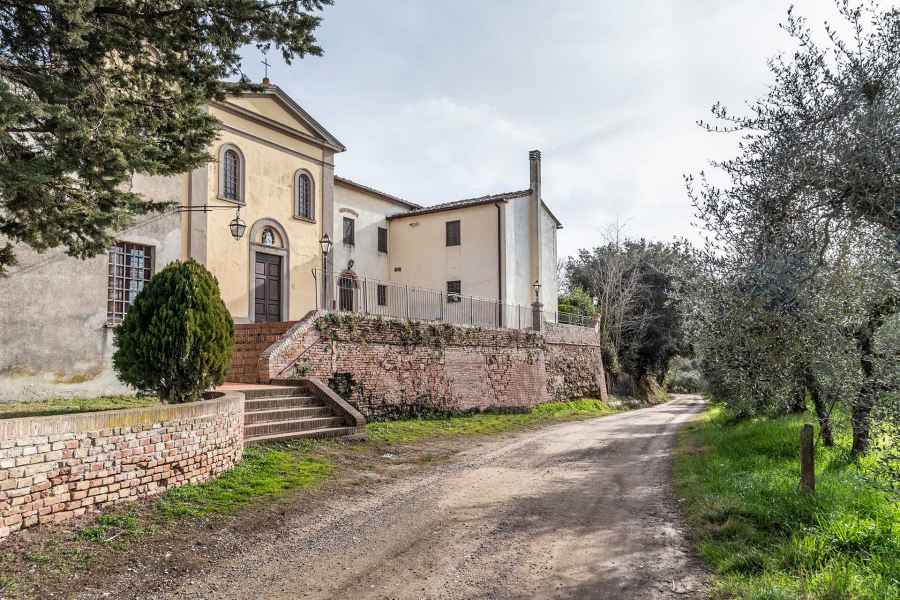 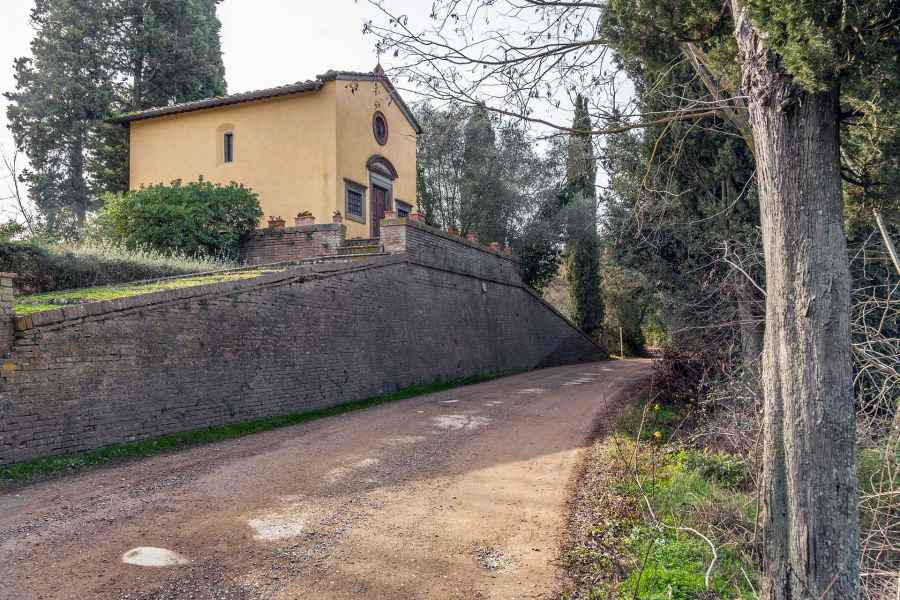 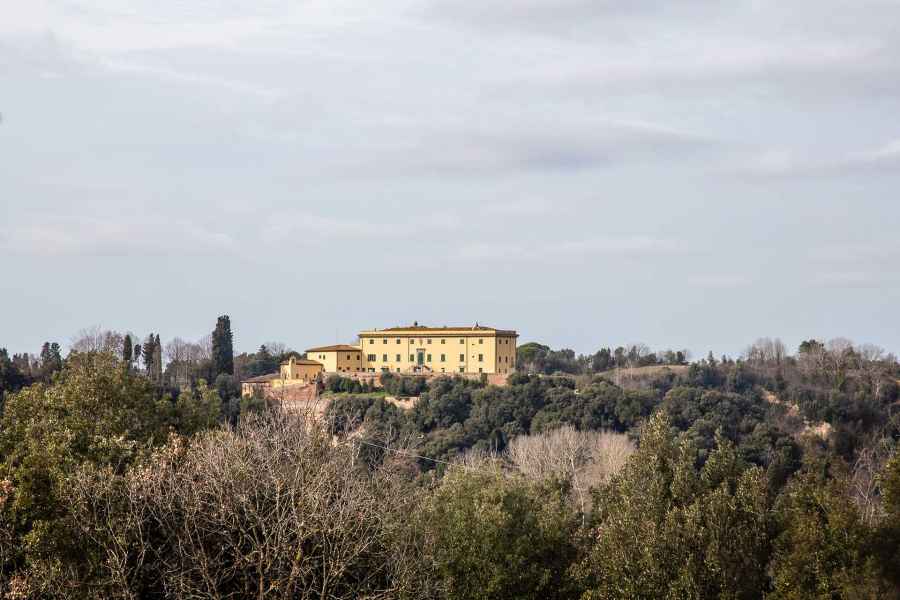