The village occupies the top of a hill on the southern side of Montalbano and bears traces of its origins as a castle from the Middle Ages. Leonardo represented Montevettolini bearing the forms of a village surrounded by walls, both in one of the maps representing the lower course of the Arno and in the famous Landscape, executed in his youthful years, dated to the year 1473.

The shape and constitution of Montevettolini in the Late Middle Ages, as reconstructed on the basis of material traces and written sources, seems consistent with the hypothesis that this castle is the one represented by Leonardo in the famous 1473 drawing, Landscape (Florence, Galleria degli Uffizi, Gabinetto dei disegni e delle stampe, n. 8P). It is believed that the panorama represents a glimpse of Fucecchio Marsh taken from the elevation of the Belvedere, on Montalbano, with part of the defenses of the castle of Montevettolini visible to the left of the drawing, while on the right, in the distance, the castle of Monsummano would have been represented, on top of an upside-down cone shaped elevation. This hypothesis is supported by observations related to the best known of Leonardo’s bird's eye maps representing the middle Arno Valley, such as, for example, The Valley of the Arno, Windsor Castle, RL 12685.

The Alberti castle and Montevettolini between Lucca and Pistoia

The scant information about the origin of the castle village make reference to the consortium called the lambardi of Maona/Montecatini which, at least from the second half of the 12th century, appeared to hold rights on Montevettolini. Nonetheless, a document from the early 13th century (1220), when the castle was already equipped with municipal institutions, highlights the rights that the Alberti family, in the collateral branch of the so-called Counts of Capraia, held on the village of Montevettolini. The reference document was a denunciation of harassment the community suffered from the noble family, and in particular by Count Guido Burgognone. The community of Montevettolini was represented by a prosecutor, who turned to the podesta of Lucca for resolution of the dispute. Two years later, in 1223, the inhabitants of Montevettolini refused to become part of the territory subjected to the city of Pistoia. Montevettolini was, in fact, like the nearby Monsummano, on the border disputed at that time between the cities of Lucca and Pistoia. The representatives of the castle, now organized into communitas, intervened in the relations with the two cities, which, in those years, competed for the Valdinievole in the construction of their respective contados. As happened for the nearby Monsummano, another castle of the Alberti, Montevettolini, as well, built strong ties with the city of Lucca, greatly limiting the expansionist ambitions of Pistoia in the territories beyond the ridge of Montalbano. Thus at the end of the 13th century, the territory belonging to the castle of Montevettolini still marked the border between the two cities. A document from 1283 describes a detailed controversy for verification of the boundaries between Montevettolini and Serravalle, or between the districtus or comitatus of Lucca and Pistoia. At that time, the castle must have had an important demographic weight, as evidenced by documents reporting the value of the census owed to the diocese. Furthermore, the magistracies of the young local government had their own statutes.

The castle of Montevettolini in the Late Middle Ages

During the course of the 14th century, the history of the castle followed that of the expansion of the powerful city of Florence: from 1329 Montevettolini, like all the castles of the Valdinievole, definitively became part of the Florentine contado. The fortune of the castle was a result of its position: a strategic position from the political and military point of view, but also for aspects related to medium-range trade, and therefore to the road network to which it was connected. Montevettolini was on one of the main roads of the Montalbano pass, as well as gravitating, like the other fortified villages of the hills surrounding the Fucecchio Marsh, on the road area of ​​the Via Francigena. Throughout the 15th century, the castle still attracted inhabitants within its walls, including through incentives and facilities. It was certainly a way to remedy the inevitable decline in population that must also have occurred in this town in the middle of the 14th century. The inversion of this tendency occurred only during the following century, with the radical transformation of the landscape of settlement of the Valdinievole.

The material traces of the castle and Leonardo's drawings

The form with which Leonardo represents Montevettolini in his drawings reflects the appearance of the castle at the end of the 15th century, that is to say, with increase for the development of the outer hamlets and surrounded by the (then) new, late medieval walls. The current village of Montevettolini preserves part of the castle defenses and of the medieval town. Interpretation of these surviving elements makes it possible for us to reconstruct their topography during the medieval period. The layout of the castle follows the curves of geographical level, with the highest point at the fortress area (today the Medici Villa), located on the northeast corner, and the rest of the village that slopes down to the opposite side. The public space and buildings were situated on the top of the elevation, at the point of the current Piazza Bargellini. The ancient Palazzo del Comune can still be recognized in the building with loggia, singularly built of travertine, with an upstairs hall opening onto which open single-light windows with round arches. On the opposite side of the square, which corresponded to the medieval castle’s public space, stands the castle church’s perfectly conserved bell tower, characterized by the singular vaulted door that gave access to the space occupied today by the Medici Villa, very similar to the tower-gate of the castle church of Monsummano Alto. It is believed that originally the tower, with its fortified access, belonged to the Fortress layout, the defense built by the Florentine Republic in the 1430s. The public square, vaguely an elongated trapezoid, was crossed through by one of the main road axes (today Via dei Palazzi), the one that connected the northeast gate, the Porta del Cantone, with the Porta del Pidocchio (Gate of the Louse), or Porta di Montaletto, located to the southwest of the castle. The rest of the town fanned out along the western slope, giving rise to a series of concentric, graduated streets connected by radial alleys. The entire village, thus developed, was surrounded by walls through which at least five gates opened. The Porta del Cantone is perfectly preserved and can be seen on the external facade of the current Medici Villa. It presents an opening with a round arch in squared sandstone blocks. Also the Porta del Vicino, on the northern side, is well preserved, and has different constructional characteristics, closer to the types referable to the Florentine phase (combination of lowered arch and round arch). On the other hand, the Porta del Pidocchio, or Montaletto, is recognizable only by the presence of some large sandstone blocks on the wall running along the current Via della Gita. Written sources name at least two other castle gates, now gone, the Porta della Guerruccia and the Porta del Ruffo. The walls were equipped with wall towers, of which no trace remains, with the exception of the tower of the Murina, now in a state of ruin along the ring road running along the small village of Malacoda. This tower, on a seven-sided polygonal plan, is made of rough sandstone blocks and well-finished portions on the corners. Within the town, which in the 15th century numbered more than 100 houses, we can recognize some of the buildings of medieval origin (Via dei Palazzi, Via del Crociale, Via della Costa).

The transformations of the village during the modern age

The political-territorial structure that the Valdinievole took on during the modern age inevitably conditioned its history. The prevailing interest of the Florentines toward agricultural production, by comparison with purely commercial activities (such as that of fish products) resulted in the profound transformation of the settlement landscape. The cultivation of new land reclaimed from the marsh subverted the plains-hill relationship, from the standpoint of the population, with the inevitable increase of farm dwellings and scattered agglomerates, to the detriment of settled areas at elevation. The castle of Montevettolini, like many of the castles of the Valdinievole, was transformed over time, involving: reduction of castle population, increase of non-improved spaces (used for vegetable gardens or for mulberry cultivation), degradation or transformation of defense structures.

The Medici Villa of Montevettolini

One of the most radical transformations of the medieval castle occurred with the construction of the villa commissioned by the Grand Duke Ferdinando I. The villa of Montevettolini, together with those of the Ambrogiana, of Artimino, and of Cerreto Guidi, was part of a larger project, to create a system of country residences connected to one another in order to draw the boundary for the Barco Reale on the Montalbano chain. Unlike other villas, built ex novo, for the villa of Montevettolini the choice was made to operate through rehabilitation of pre-existing parts of buildings, buying in fact the historical rights over the slopes and coal mines still claimed by the men of Montevettolini at the end of the 16th century. The new construction occupied the northeast corner of the medieval castle. The realization of the work (1597-1601) was entrusted to Gherardo Mechini, engineer of the Parte Guelfa and close collaborator of the Grand Duke on numerous and various commitments, such as in the construction site of the Villa di Artimino, opened during the same period. His presence at the two sites can be recognized in the constructional and decorative solutions for the two edifices, which in some cases have strong similarities. Such as, for example, the singular angular bulwarks marked by the rusticated stones at the corners. The similarity between the layouts of the two villas is probably due to their analogous function, as they were both hunting lodges. Nonetheless, for Montevettolini it is obvious how important the choice must have been to realize the villa choosing a site at the corner of the ancient castle. The tower that defended the northeast access, the Porta del Cantone, can be clearly recognized in the large corner building. The access system was merged into a single building together with parts of the curtain wall, along with one of the fortress towers, and a part of the internal space already owned by the parish. On the external facades, those that have incorporated portions of the castle walls, we can still see the ancient loopholes that opened through the walls at the height of the patrol walkway.
Texts by
Silvia Leporatti / English translation by John Venerella
Related resources
Related places
Gallery 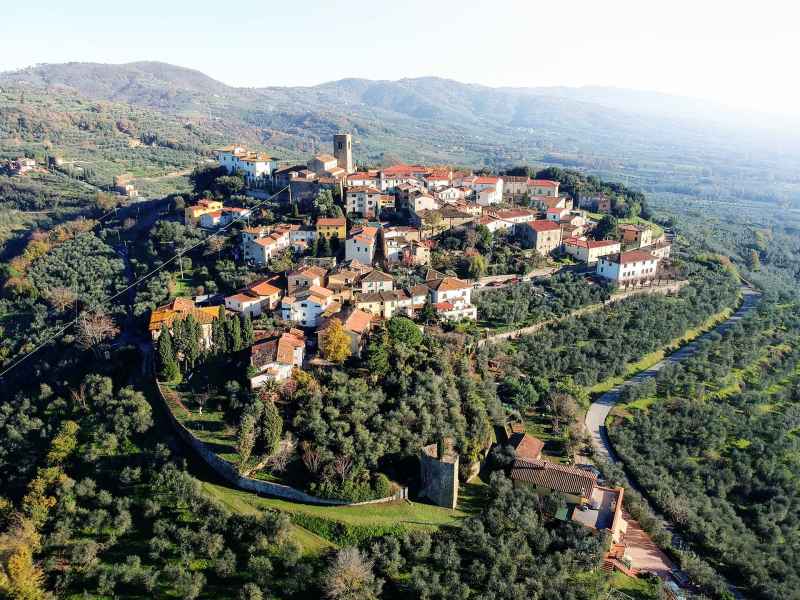 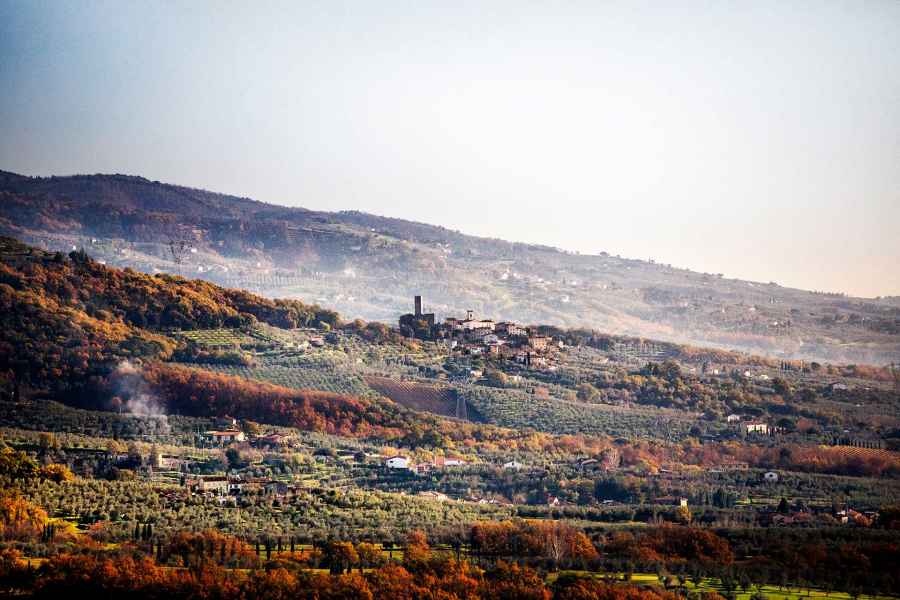 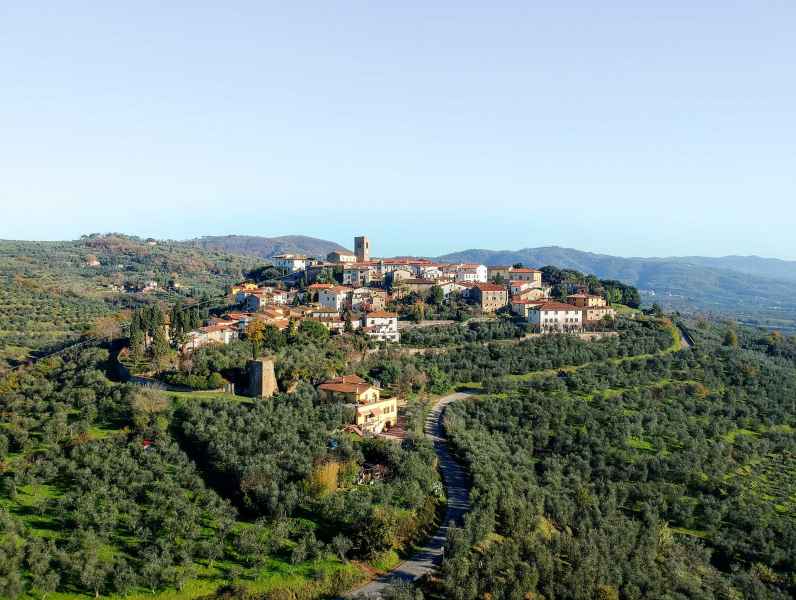 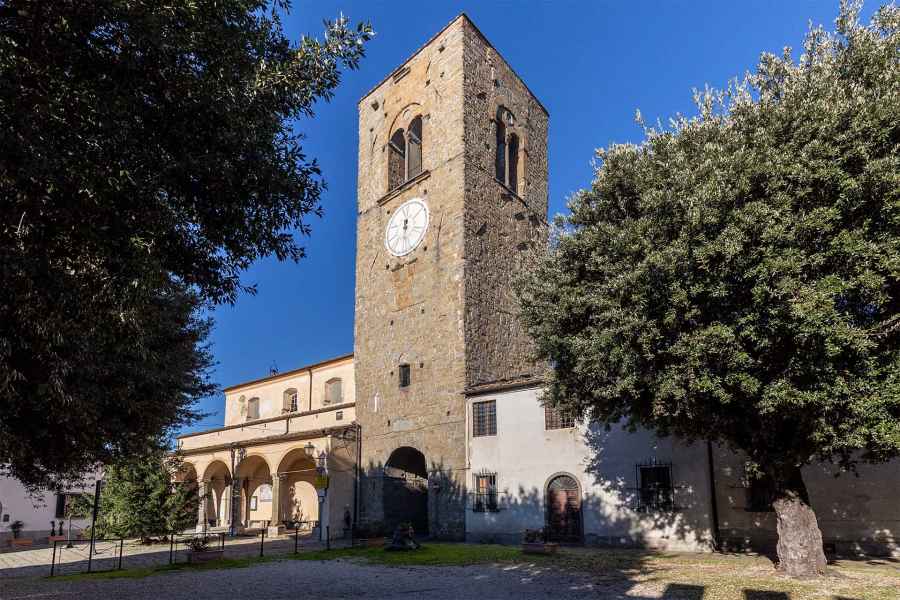 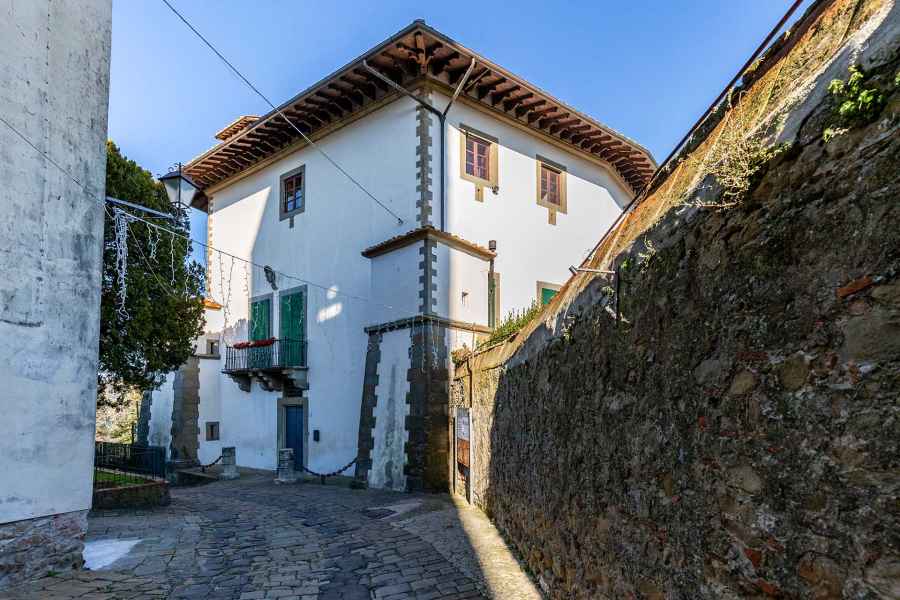 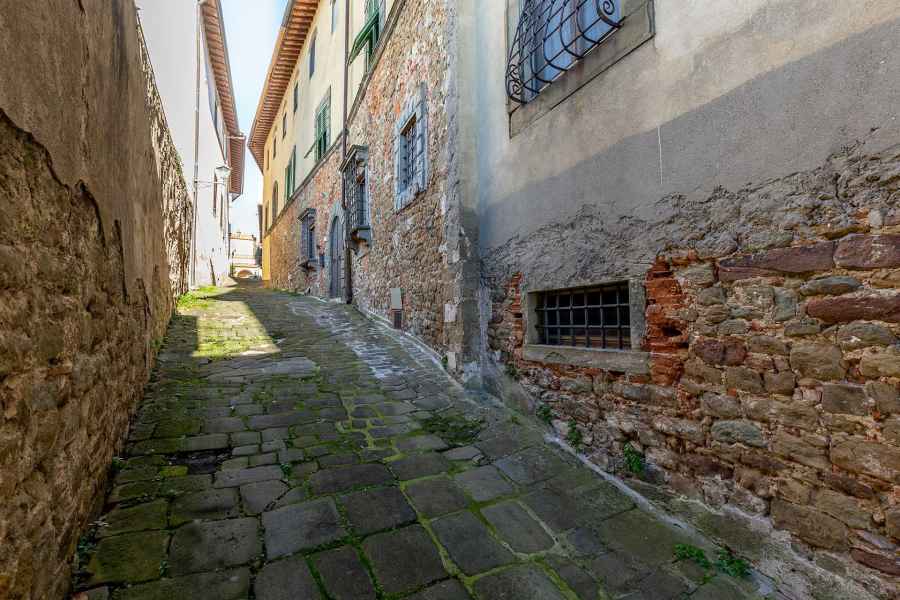 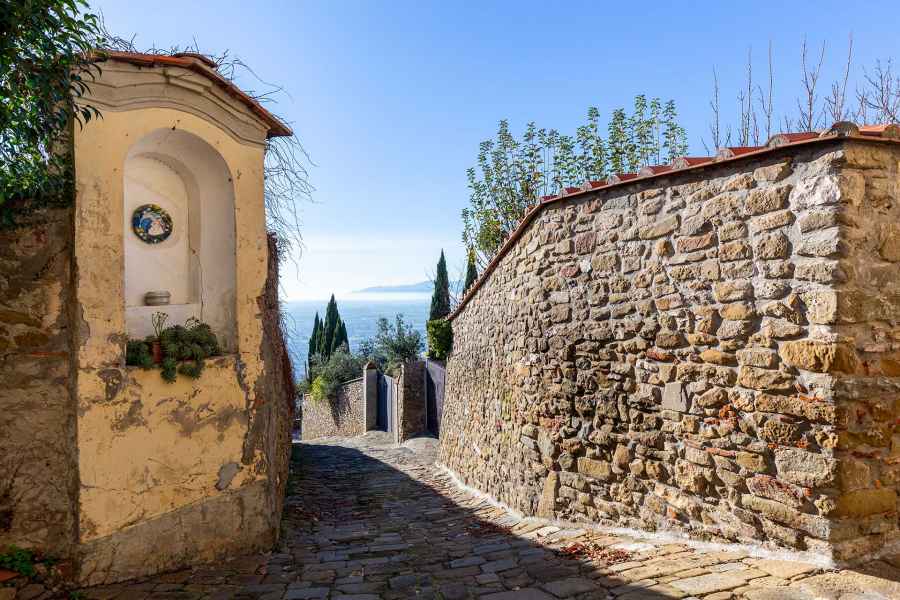