The site occupies the summit of one of the peaks of the Valdarno side of Montalbano. Compared to other villages, where the continuity of housing has heavily impacted the conservation of the original forms of the site, in Monsummano Alto, the morphology of the medieval castle is singularly intact. It is in this form that it is represented in some of Leonardo da Vinci's drawings, as in the renowned Paesaggio (Florence, Galleria degli Uffizi, Gabinetto dei disegni e delle stampe, n. 8P). The drawing, created in 1473, shows a view of the Fucecchio marsh as seen from Montalbano (Poggio del Belvedere). On the left, in the foreground, we can recognize parts of the walls and towers of a castle, identified as Montevettolini, while on the right, in the distance, we can make out the profile of a walled and turreted castle situated at the top of a an inverted, cone-shaped peak. The position of the point of elevation in relation to other elements of the landscape has made it possible for us to recognize that profile as the castle of Monsummano. This hypothesis is supported by observations relating to the most well-known bird's-eye view maps by Leonardo, representing the middle Valle dell'Arno, like La Valle dell’Arno, Windsor Castle, RL 12685

Origins: the abbot of Sant'Antimo and the Alberti castle

The town of Montesumano appears for the first time in a document from the year 1005. It involves the sale of a series of assets of the powerful abbey to Count Ildebrando di Rodolfo of the Aldobrandeschi family. The act describes in great detail some goods that are excluded from the sale: the so-called Lama of San Vito, located in the vicinity of the Nievole and defined at its boundaries by a road that goes from Montesumano as far as the bridge over the Nievole.

The first mention of a castle at the place called "Monsummano" dates back only to the first decades of the 12th century, when the fortified village already seems to have been part of the possessions of the noble Alberti family. A few decades later, in 1181, the castle of Monsummano was controlled by a collateral branch of the family, represented by forefather Guido di Rodolfo, known as il Borgognone, the same branch of the Alberti that still had rights over the castle of Montevettolini at the beginning of the 13th century. In the act of 1181, the count made available to the city of Lucca his castles of the Valdinievole, strategically decisive, at that time, in defining the territories belonging to the cities of Lucca and Pistoia. The castle of Monsummano, like Montevettolini, was located on the border disputed between the two cities that were in the process of forming, during those years, their respective contado.

The castle of Monsummano between Lucca and Florence

Following the crisis that affected the Alberti house at the beginning of the 13th century, the castle of Monsummano, by this point organized as a rural municipality, was definitively in the hands of the city of Lucca, making it a bulwark against the pressure of Pistoia in the Valdinievole. The importance, predominantly strategic, of the castle of Monsummano for Lucca, which had literally bought it in 1218, is clear from the statute of Lucca dating from 1308, where fully two sections were dedicated to defense of possession of the castle, the hill, the tower, and the castle district. However, only a few decades later, in 1329, Monsummano, like the other castles of the Valdinievole, submitted itself to Florence, which had begun its unstoppable expansion to the detriment of neighboring cities. The castle community, governed by a podesta appointed by the town, was the smallest of the Valdinievole villages. The already scarce population of Monsummano, by comparison, for example, with Montecatini or Montevettolini, did not manage to reverse its trend toward population decline, a phenomenon in progress in the countryside since the mid-14th century. A Florentine resolution dating from the beginning of the next century informs us that the Signoria, committed at the time to systematic surveying of the defensive structures of its contado, had ordered the restoration of the castle's stronghold, which had become unusable. In 1466 the bishop of Lucca could not go up to the castle because of the poor road conditions, and at the same time the rector of the church of Monsummano complained about lack of attendance at sacred functions, clear evidence of a tendency to abandon the site.

Monsummano in the modern age

By the end of the 15th century the population decline of the castle village was unstoppable, and at the same time, the first signs of occupation of the plain at the foot of the Monsummano hills were documented. For example, in the locality "le Case", there still stands a building that would appear datable, on the basis of a Medici coat of arms, to the year 1516. At the beginning of the 16th century, therefore, the plain on which the new village of Monsummano would rise was already enjoying good living conditions. Modern Monsummano owes its development to the intervention of the Grand Duke, Ferdinando I, who was responsible for founding the great Sanctuary of Santa Maria della Fontenuova. The place of worship was dedicated to the Virgin as a result of miraculous events including, above all, the emergence of a source of water near the tabernacle that held the venerated image of the Madonna, which was located at the base of the hill of the ancient castle.

Material traces of the castle and Leonardo's drawings

Despite the advanced deterioration of the structures and the continuing abandonment of the site, documented throughout the 15th century, Leonardo represented Monsummano in his drawings as still rather well preserved, at least in the most characteristic elements of the castrum layout. This is what can be observed today on the hill of Monsummano Alto. The planimetric layout, an elongated ellipsis, a considerable part of the high walls, and the religious complex remain clearly visible in the medieval castle. The city walls are made of rough cut local limestone. They were equipped with battlements and arrow loops, visible on the northern face. Two accesses of the castle have been perfectly preserved: the Porta di Nostra Donna, to the northwest, toward the Valdinievole, and the Porta del Mercato or del Pidocchio to the south, toward the nearby castle of Montevettolini. The two entrances have similar constructional characteristics, such as the use of stone material of exceptional dimensions, even higher than a meter, on the jambs and openings, consisting of deep archivolts covered with barrel vaulting made of stone material set perpendicularly. The fronts of the openings are furnished with round arches of squared and smoothed ashlars, radially arranged, marking on the extrados a rising arc extending toward the acute arch. The most noticeable difference between the two doors is the lowered sub-arch present only on the outer face of the Porta di Nostra Donna, which is grafted onto the rounded corbels with which two of the long ashlars of the jambs end. This solution could have been part of an alteration that occurred after the castle passed under Florentine control (1329), while the original defensive system seems to date back to the mid-13th century. Only the pentagonal tower, which is located on the northern vertex of the curtain wall, may have been built between the end of the 13th century and the beginning of the 14th century, as part of the strengthening of the castle defenses promoted by the city of Lucca. In fact, this tower is already mentioned in Lucca’s 1308 statutes, in relation to the need to carry out repairs so as to allow the castellan to return there to live again. Most of the medieval housing fabric is in ruins, largely covered by vegetation. In a central position, on the highest part of the hill, are concentrated the castle’s public buildings, the Church of San Niccolò, the rectory, and the ancient headquarters of the Compagnia del Santissimo Sacramento. The town hall, the residence of the podestà, also overlooked the public square, the "platea communis", mentioned in the 14th-century statutes. The single-hall church shows numerous signs of restorations and changes to the original walls, which continued until the 17th century. However, on the lower part of the northern face and on the façade, the walls of the first layout are visible, in square blocks of local limestone (alberese), some even of considerable size, typical of the so-called "Romanico Pistoiese" churches. Unfortunately, the external façade of the original apse of the church of San Niccolò was covered over by a subsequent construction, hiding a beautiful example of a Romanesque apse realized using smoothed and shaped segments to form the curved surface of the apsidal basin. At the center, a narrow and long single lancet window, with the keystone worked in relief (anthropomorphic head). The lower part of the bell tower is particularly interesting because it has a vaulted passage entirely similar to that of the bell tower of the church of Montevettolini. In this case the architectural solution of the tower-door gave access to a free space at the back of the church.
Texts by
Silvia Leporatti / English translation by John Venerella
Related resources
Bibliography 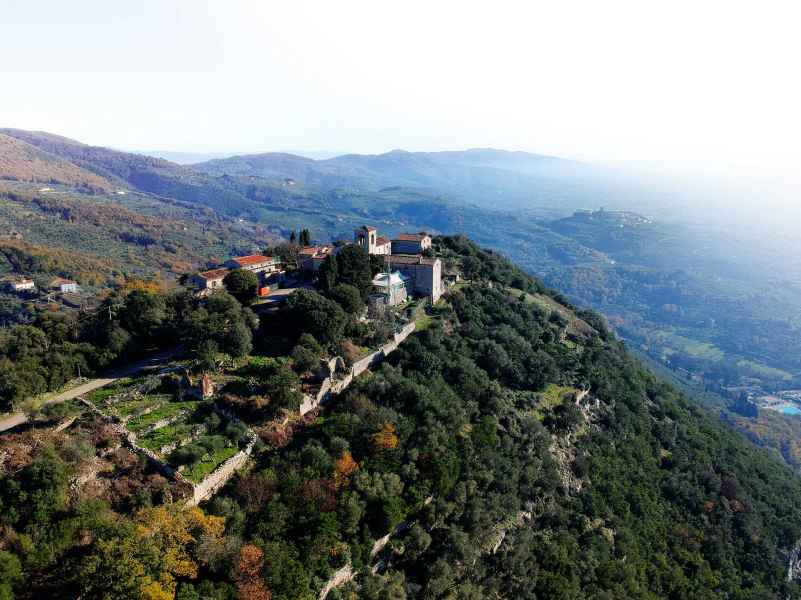 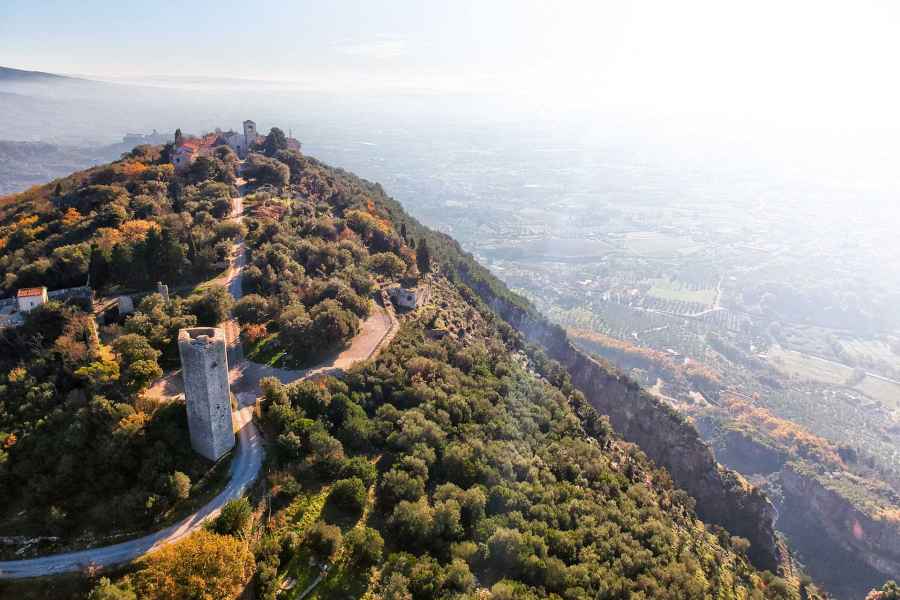 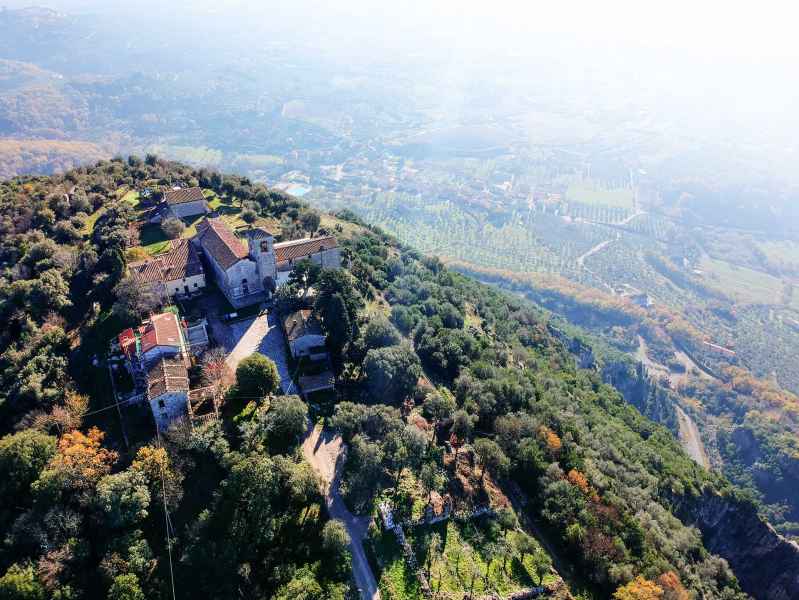 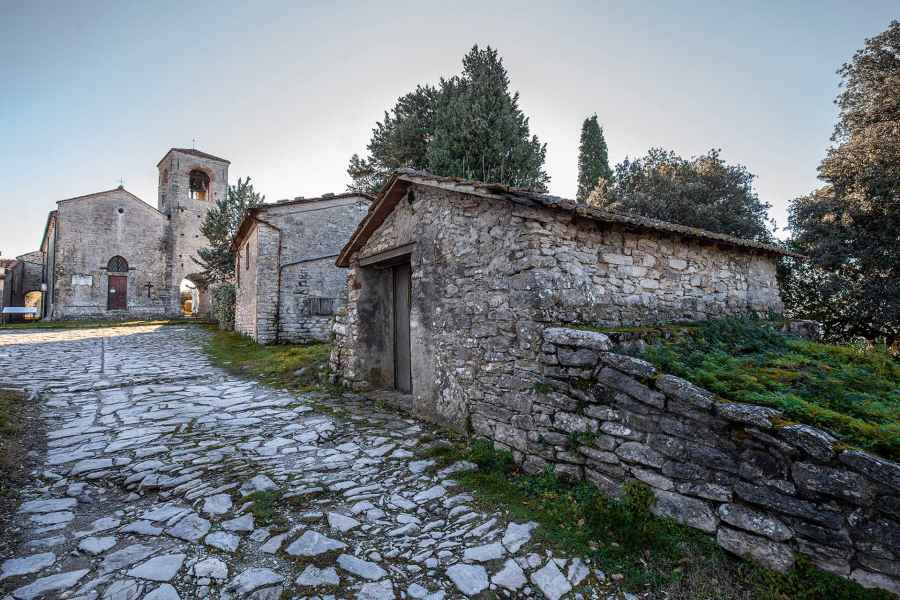 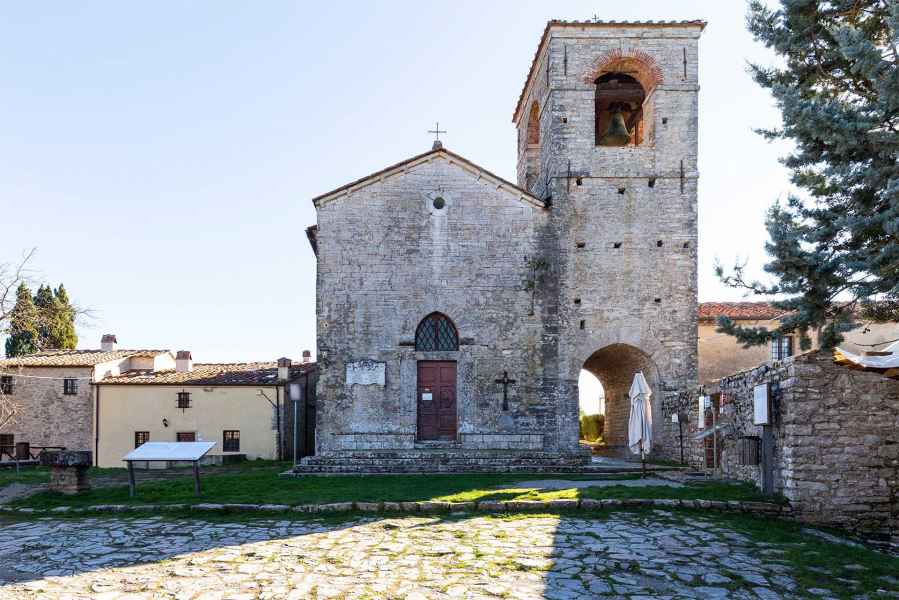 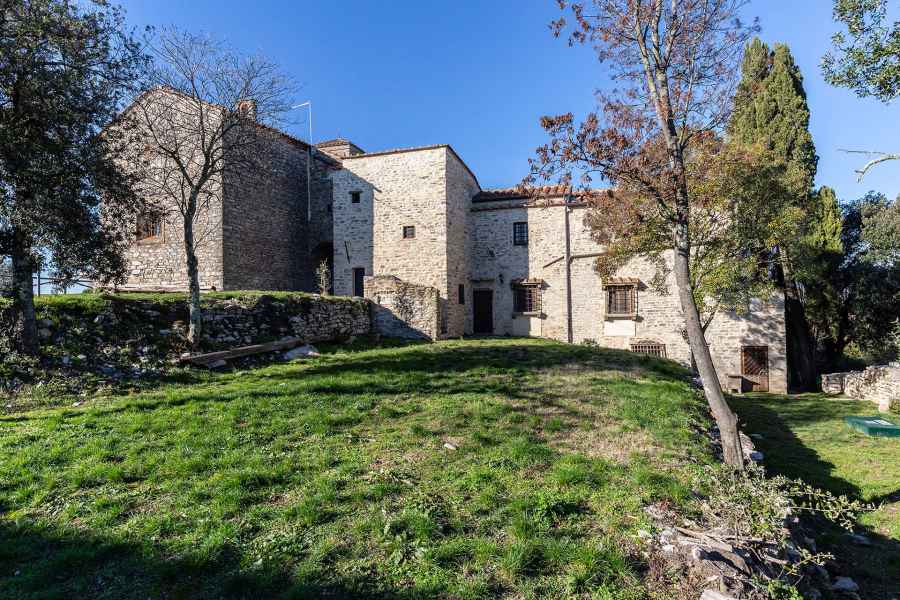 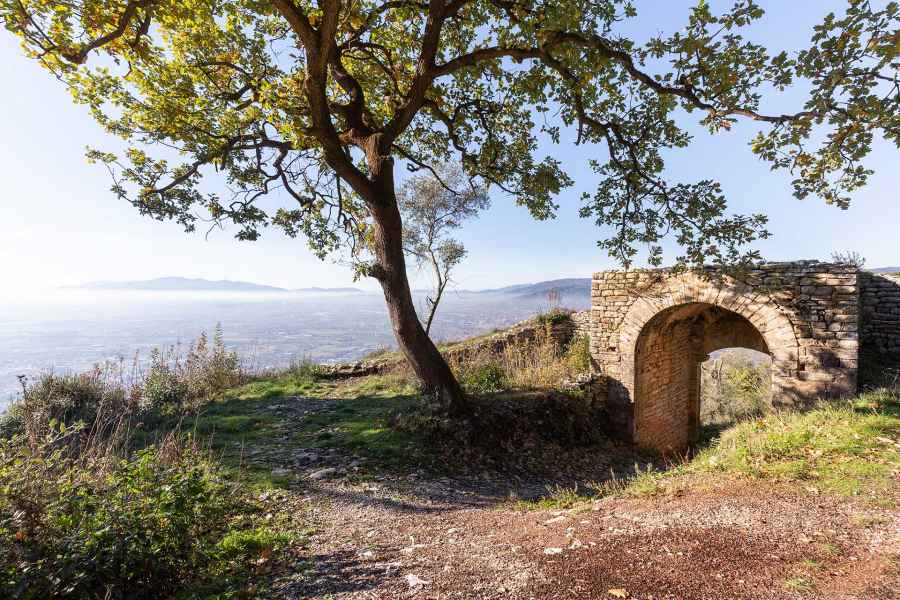