The village occupies the ridge of one of the reliefs delimiting the Valdinievole on the Lucca side and perfectly preserves the structure of a late medieval castle, equipped with curtain wall, towers, and a stronghold at the highest part of the town. This was the form in which Leonardo represented the small but well-fortified village of the Valdinievole, recognizable in his famous 1473 Arno Valley landscape.

In the background of the renowned drawing by Leonardo Landscape (Florence, Uffizi Gallery, Cabinet of Drawings and Prints, No. 8P)—a glimpse of the Fucecchio Marsh plain viewed from Belvedere hill, on Montalbano—the turreted profile of a castle has been identified with the fortress of Montecarlo. Another Leonardian representation of Montecarlo can be seen on the map The Arno Valley, Windsor Castle, RL 12685, where the fortified village is located between Fucecchio Marsh and the Bientina reservoir. In this drawing Montecarlo is represented as a fortified village with a regular, elongated shape, dominated on the short, northern side by a turreted fortress we can recognize as the Rocca del Cerruglio.

Origins: the curtis of Vivinaia

The fortified village was built in the form as we see it today as a result of the defensive needs of the city of Lucca during the first decades of the 14th century. On the hill of Cerruglio, there was already a triangular-shaped fortification, built in the second half of the 13th century to defend the nearby castle of Vivinaia, whose destruction, as we shall see, would be at the origins of the fortified village of Montecarlo. Vivinaia, once the seat of a marquis curtis, appeared already in the documents from the end of the 11th century as a castrum linked to the consortium of nobles grouping members of the branches of the noble Da Uzzano and Da Montechiaro families.

The Castrum Lucense and the fortified village of Montecarlo

During the 13th century the populous castle of Vivinaia was organized as a rural municipality. At the beginning of the 14th century, its name was changed, significantly, to Castrum Lucense, Castello Lucchese, by virtue of the strategic role it would play during the years that territory became a war zone. The castle of Vivinaia, flanked by the fortress of Cerruglio, was at the center of the events that saw the armies of Castruccio, lord of Lucca, and the armies of Florence contending for the Valdinievole. For the city of Lucca, one of the most difficult stages in the war with Florence began after Castruccio’s death. In 1331 the retreating Florentines ravaged Vivinaia-Castello Lucchese, destroying it. The fortress of Cerruglio still remained, with its three towers, which became the starting point for a new defense project, the castle of Montecarlo. In the meantime, Lucca had welcomed John, King of Bohemia and Count of Luxembourg, as lord of the city, who came with ambitious intentions to Italy with his son Charles IV. The sovereign’s intervention was aimed at the border areas, where the Florentine troops represented a constant threat. It was during this period that the project to strengthen and enlarge the original three-towered layout of Cerruglio was put into place. Beginning from 1332, written sources begin to report the new fortress as being under construction, well defended, and equipped with a fortified village, bearing the name of "Mons Caroli", Montecarlo, as a clear reference to the young prince, the son of the count of Luxembourg and lord of Lucca. Although that ruler’s intervention into Lucca’s affairs failed within little more than a year, construction on the new foundation continued. Between 1333 and 1334, documentation indicates works on defining the defenses: there is mention of the moat and the drawbridge that must have connected Cerruglio with the village; the church, under construction, received the baptismal font of the nearby parish church of San Piero in Campo, at that point in ruins; the new village was in the process of being populated by families from the destroyed castle of Vivinaia, in line with the project of founding a settlement, a village, in addition to a very well-equipped fortress. In 1334, again, documents show works of completion of the fortresses of the castle and the stronghold of "Montiskaroli". For about 30 years, between 1335 and 1369, following the removal of the count of Luxembourg from Italian politics, use of the usual toponym of "Cerruglio" resumed in official papers when referring to the old fortress, updated in its defenses, and to the fortified village constructed at its side. Only after 1369 did the name Montecarlo come back into use. This happened at the time when Charles of Luxembourg—who was, as seen, at the origin from youth of the name of the formidable fortress under construction—went down again to take care of the city of Lucca, this time as Emperor Charles IV.

The structures: the inhabited area and its fortifications

The fortified center is well defined in its two parts: the fortress, or the original layout on the hill of Cerruglio, and the village below, also surrounded by walls. The fortress, on a triangular plan, is made up of a semi-cylindrical stone tower, located at the northern vertex of the layout, and two twin towers with a square base. The first one, which stands out for its excellent masonry in squared sandstone blocks, probably belongs to the most ancient fortification of Cerruglio, from the 13th century. The two towers with a square base and the connecting curtains belong, instead, to the new fortress, from the 14th century, in its later version, namely, that redone during the years of Emperor Charles IV (1369-1400). The area of the fortress, with its pre-existing elements, constitutes the center of convergence of the urban layout of the 14th-century village. The inhabited area, by contrast with what usually happens in newly founded medieval villages, did not develop upon a quadrangular layout, but rather came to be articulated on a pair of converging road axes, in the shape of a wedge. The streets are the current Via Roma and Via Carmignani, which converge near the fortress, in front of the collegiate church of Sant'Andrea, the village’s only open space. The accesses corresponding to the two road axes are Porta Fiorentina (to the southeast) and Porta Nuova (to the east). The village was equipped with three more gates: one, whose name does not remain, along the Pescia side; and two more to the north, Porta Lucchese and Porta Pesciatina. The current village blocks maintain the trace of the original layout created using rational subdivision of the space within the walls. The lots on which the buildings for dwellings were built then were small, about 5x12 meters, with the short side facing the road and development of the planimetry along the entire length, up to the side facing the secondary road at the back. The regular layout reflects the typical plan used in newly founded medieval villages. The walls, which surround the entire village, belong primarily to the 1333 construction works. They consist of series of brick arches covered with masonry of river pebbles and wedges, and can be seen along some parts of the village perimeter. The walls were interspersed with square-based towers, one of which remains in a well-preserved state, on Via Nuova, made entirely of bricks. One of the latest interventions took place around the middle of the 15th century, aimed at strengthening and prolonging the efficiency of the 14th-century fortress. The structure, in plastered brick, can be recognized by the presence of stone brackets and ogival brick arches with machicolations above a sandstone string course. Lastly, the Medici intervention, datable to the second half of the 16th century, on initiative of Cosimo I, primarily concerned the bastions for reinforcing the keep. The buttressed ravelin, the drawbridge, and the unfinished triangular bastions, positioned northeast and west of the fortress, are works dating from the 17th century.
Texts by
Silvia Leporatti / English translation by John Venerella
Related resources
Bibliography 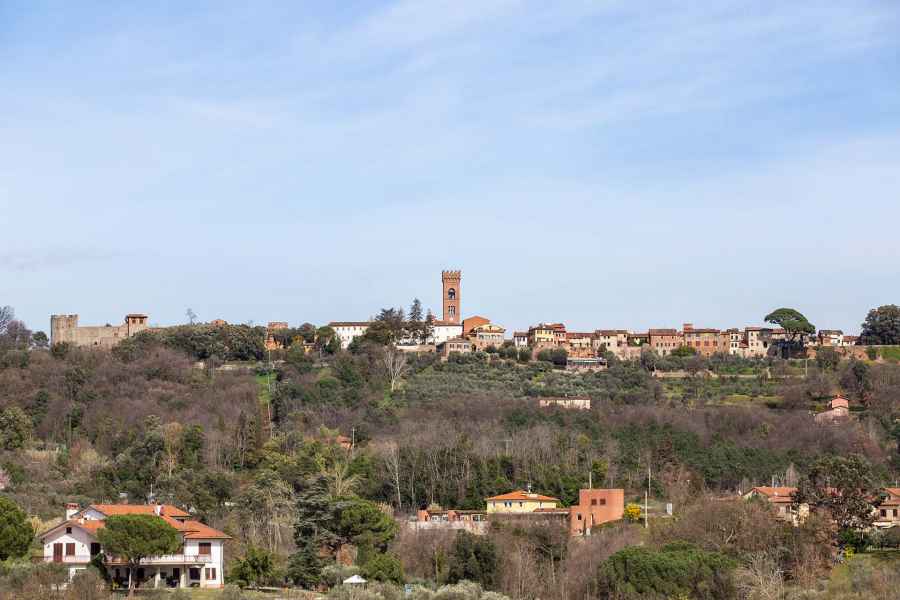 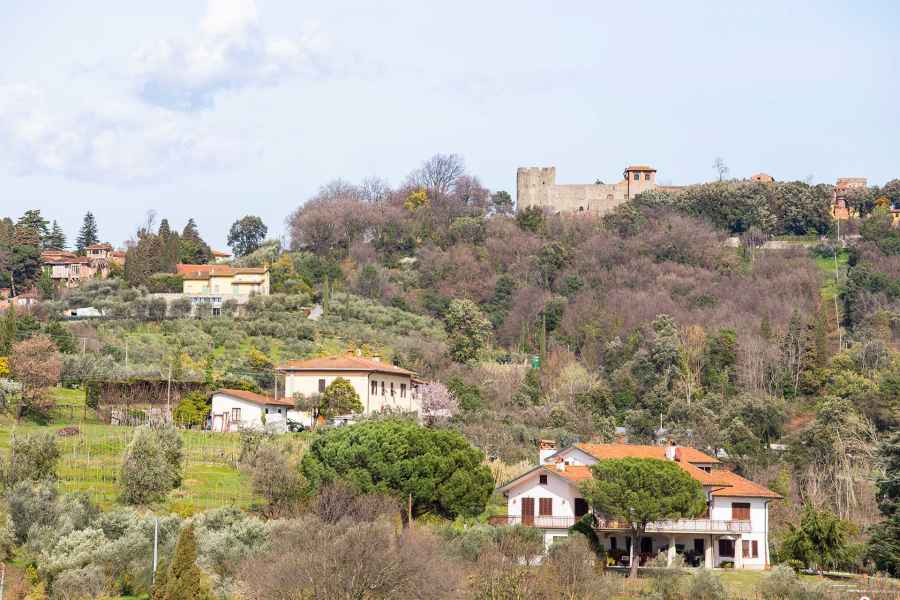 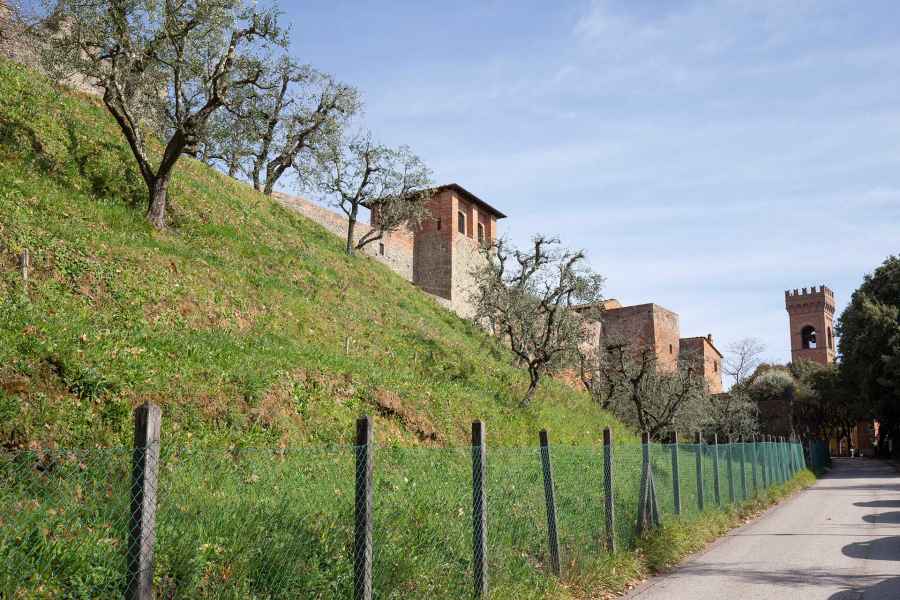 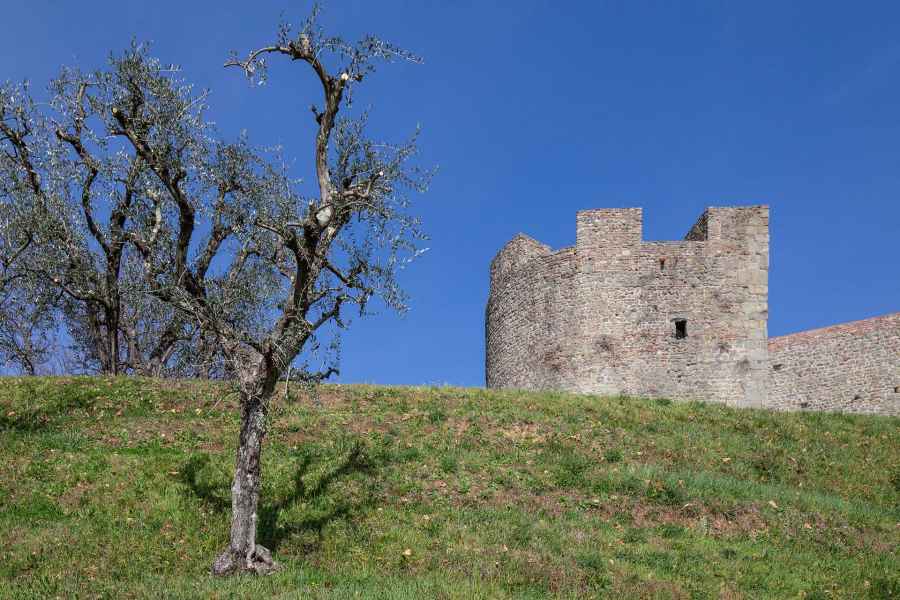 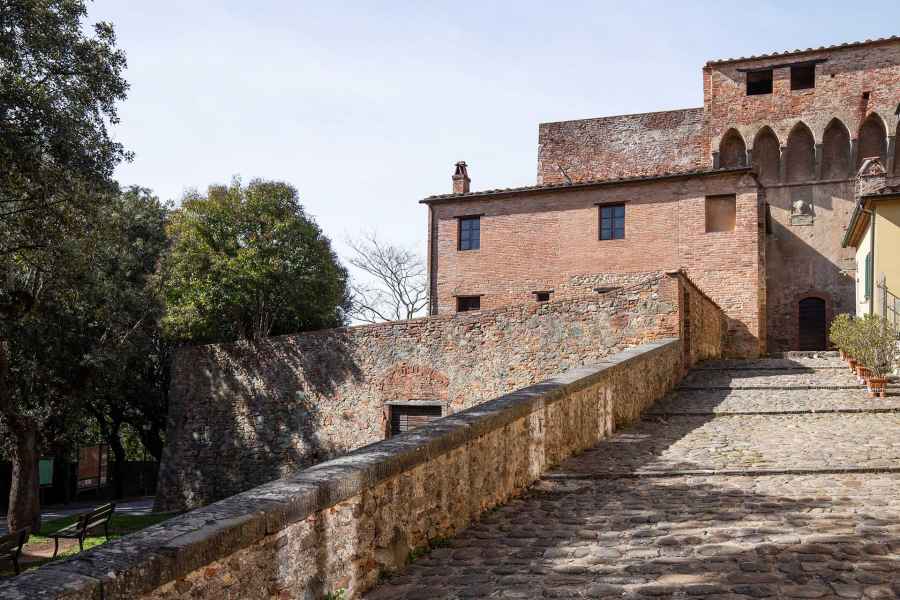 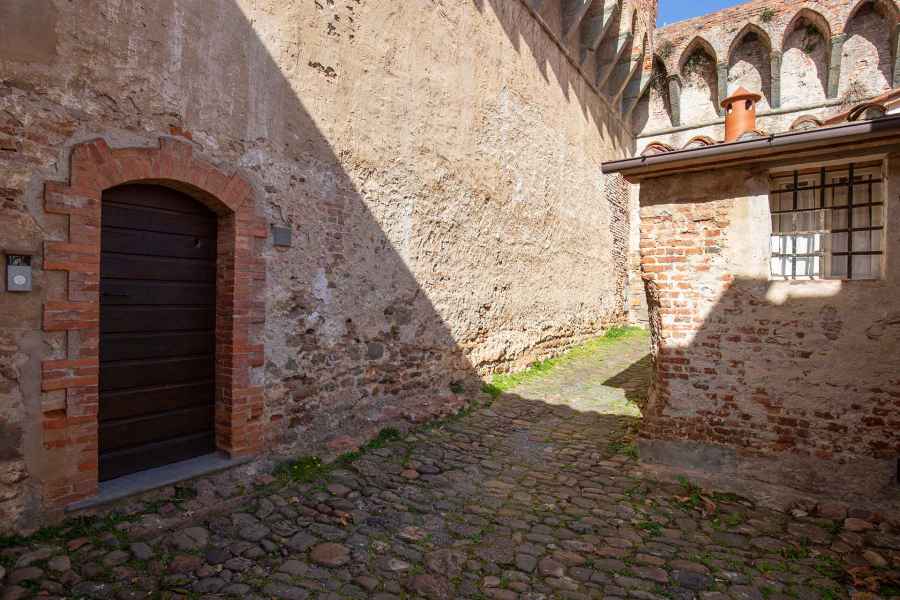