The oldest drawing of the castle church of Vinci can be seen in the sketch on the map of the castle of Vinci made by the Capitani di parte Guelfa at the end of the 16th century, where the church, with its annexes, is indicated to the side of the castle keep of the Counts Guidi. A church already existed within the castle walls, at least from the early 12th century, when the cappella de Vincio was mentioned in the documents of the diocese of Pistoia, and the bishop collected tithes from the homines of that community. The castle church was dependent, in fact, on the parish church of Sant'Ansano in Greti, one of the parishes of the diocese of Pistoia situated on the southern slope of Montalbano. The church, however, belonged to the noble Guidi family when it appeared for the first time with the title dedicated to La Santa Croce (the Holy Cross). The reference document was the sale by the Guidi counts of their shares of the castle of Vinci to the city of Florence in 1254. Together with the castle, their shares of the Ecclesia Sancte Crucis were ceded. In the 16th-century pastoral visits, the church was indicated with the twofold title of S. Andree et S. Crucis de Vincio. The hypothesis has been advanced that the title of Sant'Andrea could be the ancient dedication of the cappella de Vincio, to which that of La Santa Croce was later added, then becoming the prevailing title from the 13th century onward. Nonetheless, the festival of Sant'Andrea is still celebrated in the calendar of the local ecclesiastical chapter as the feast of the patron saint of Vinci. The church of Vinci was elevated to the dignity of propositura (prepositure) in 1852, on the occasion of the fourth centenary of Leonardo’s birth.

The church of Santa Croce di Vinci as it appears today

The Ecclesia Sancte Crucis of the castle of the Counts Guidi, which was the parish church of the da Vinci family, appears today in the neo-Renaissance forms of the most recent, radical restoration, dating back to the 20th century. The medieval church must have had the typical single-hall layout, with semicircular apse, to which was added an architraved portico supported by Tuscan columns. The interiors were radically transformed, during the 17th and 18th centuries, in the internal configuration of the altars. In the 18th century, there were no fewer than ten, created on the initiative of noble families of Florentine origin and religious congregations, beneficiaries of the altars themselves. Only two now remain, positioned at the heads of the side aisles. On the right, the one dedicated to the Madonna of the Rosary, on which there is a painting showing the iconography of the Madonna offering the Rosary to the Dominican saints. On the left, the altar of Sant'Andrea, patron saint of Vinci, with a painting depicting the Nativity of the Virgin (1562) attributed to the workshop of Francesco Brina. The beautiful painting of the Magdalene in Meditation, attributed to the workshop of Alessandro Rosi and dating to the last quarter of the 17th century, comes from an altar belonging to the old church. An image of the church of Santa Croce before the complete reconstruction of the last century can be seen in a painting by Telemaco Signorini, and also in a photo from the early 20th century, conserved in the Biblioteca Forteguerriana of Pistoia, where one can still see the portico abutting the church's gable roof facade, and the 19-century bell tower. Between 1929 and 1935 the church was completely rebuilt to a plan by the architect Giuseppe Gullino. The interiors were completely reconfigured, while outside, the project of the new facade has erased the long portico that protected the ancient accesses to the parsonage (on the left) and the oratory of the Compagnia del Corpus Domini (on the right). The oratory, completely rebuilt and inaugurated in 1952, now houses a suggestive proposal for the “baptistery” of Leonardo da Vinci.

The ancient church of Santa Croce, in Leonardo’s time, was the parish church of the community of Vinci. As is known, the da Vinci family lived, beginning back from Leonardo's paternal grandfather, in the house in the castle village. Only ser Piero, Leonardo's father, lived for some time in Florence, to practice his profession as notary. For this reason it is likely that little Leonardo was entrusted to the care of his grandfather Antonio and his uncle Francesco, at least until early youth, when he left the village of Vinci to go to Florence. It is to the Reverend Emil Möller that we owe the fortuitous localization of the document that accurately gives Leonardo’s birth date. The document, discovered in 1931 among the papers of the State Archives of Florence, is the note penned by Leonardo’s grandfather Antonio on the last page of a notary registry belonging to his own father, ser Piero di Guido. Antonio was not a notary, but he kept his father's papers, in accordance with a family custom that had been going on for a century or so. The memorandum reports some information about the happy event: "A grandson was born to me, the son of my son ser Piero, on Saturday the 15th of April, at the third hour of the night. He was given the name Lionardo. The priest Piero di Bartolomeo da Vinci baptized him [...]". The baptism surely took place in the church of Santa Croce of Vinci, Leonardo's family’s parish. The ancient baptismal font of Santa Croce, which survived the profound transformations completely erasing the late medieval church frequented by the da Vinci family, is now conserved in an environment that was created specifically for the Leonardian celebrations of 1952. The baptismal font of Leonardo stands at the center of the octagonal chamber designed by Ugo Giulio Arata in the spaces of the ancient oratory of the Compagnia del Corpus Domini, recently enriched by the metal alloy sculpture works of artist Cecco Bonanotte, inspired by themes of the Salvation. It is believed to have been here that parish priest Piero di Bartolomeo Cecchi baptized the newborn Leonardo da Vinci on 16 April 1452, as we read on the stone memorial on the wall of the 'new baptistery' containing the exact text of Antonio da Vinci’s annotation discovered by Emil Möller.

The community of Santa Croce in Vinci

The da Vinci family at the time of Leonardo’s birth of lived permanently in the house situated in the castle village, as stated in the land registry of his paternal grandfather Antonio and archival documents relating to the family. The da Vinci family had obtained Florentine citizenship in the 14th century, but they continued to live in their place of origin: only Leonardo’s father, a notary from 1448, lived in Florence to practice his profession. Ser Piero’s lucrative professional activity was at the origin of the increase in family property that occurred, above all, in the last quarter of the 15th century. Ser Piero's land registry declarations from 1498 and the deed of 1506, written after the notary’s death, for the subdivision of the patrimony among his numerous sons and daughters, make report of the family's properties, including those situated in the community of Santa Croce. In addition to the house in the castle village, to which a portion had been joined for use as a stable, ser Piero had bought the property of another house in the castle, abutting the walls. The territory dependent on the church of Santa Croce roughly included the valley of the Forra delle Quercete, called Valle Buia, which included the hills situated northeast of the castle and the slopes located to the north, reaching as far as the ravine of Rio Balenaia, up to the locality of Il Ferrale. The area was very rich with mills fed by the watercourses flowing down from Montalbano. It was in this vast area surrounding the castle that the family owned farms and land. The localities mentioned on the northeastern hills of the castle are Leano, podere Broto (the Broto farm), Quaranzola. On the northeast side they owned the podere della Colombaia and other lands, particularly vineyards, in the locality of Grappa. Some of these rural localities can be recognized with the same names on the late 16th-century maps by the Capitani di Parte Guelfa (leano, botro aleano, vergine di quarazola, grappa). Those places have maintained the same names, up to the 19th-century land registries, with the result that we can say that the localities of the da Vinci family farms have been preserved and can still be recognized today in the countryside around Vinci.
Texts by
Silvia Leporatti / English translation by John Venerella
Related resources
Related places
Gallery 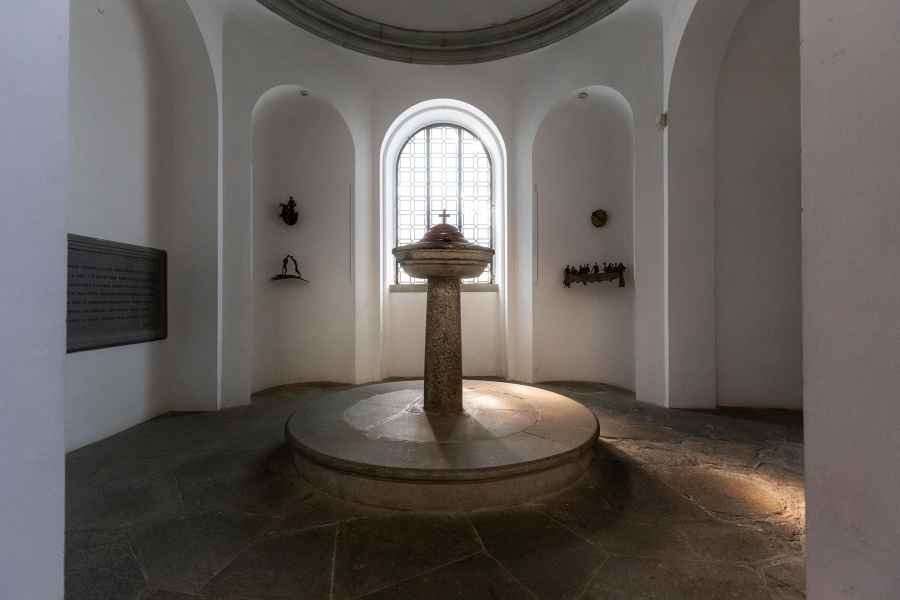 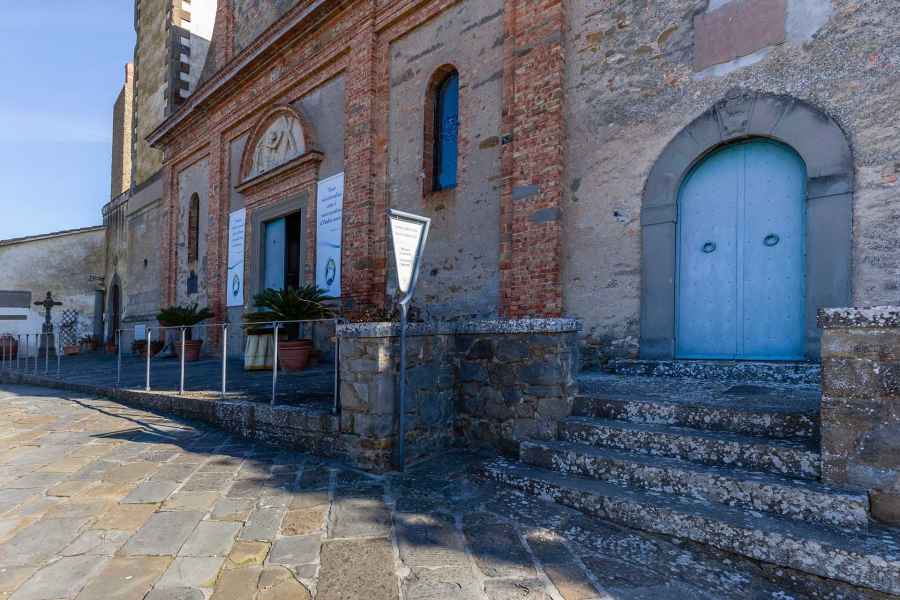 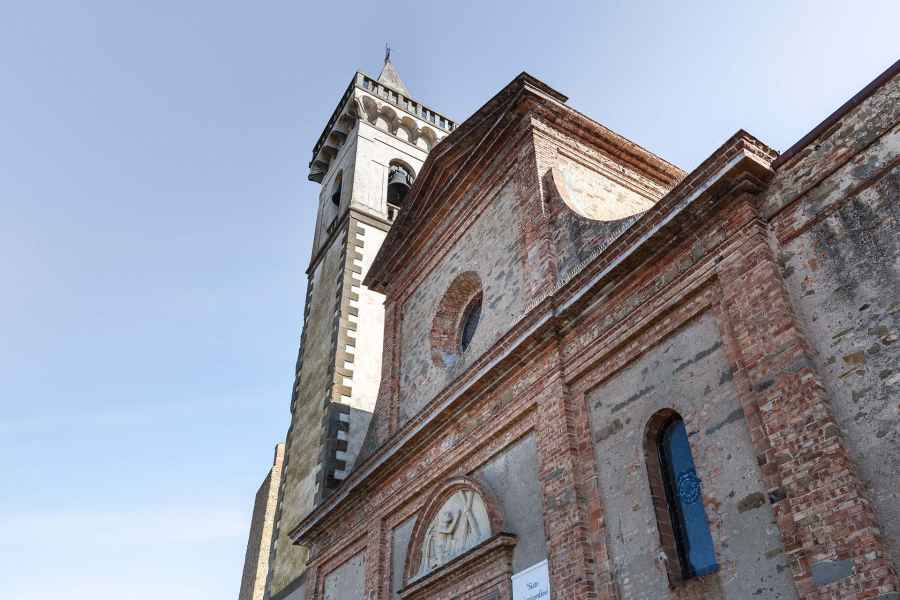 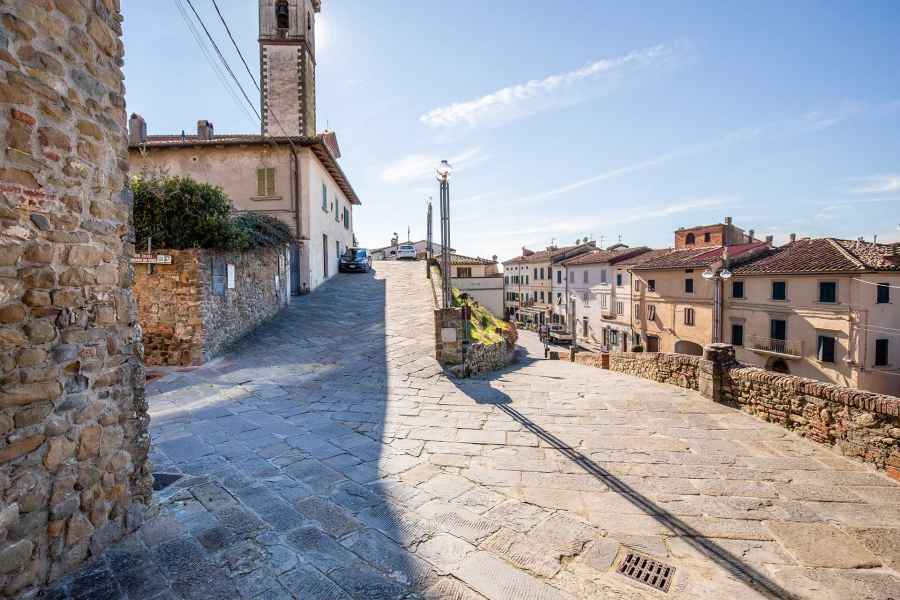 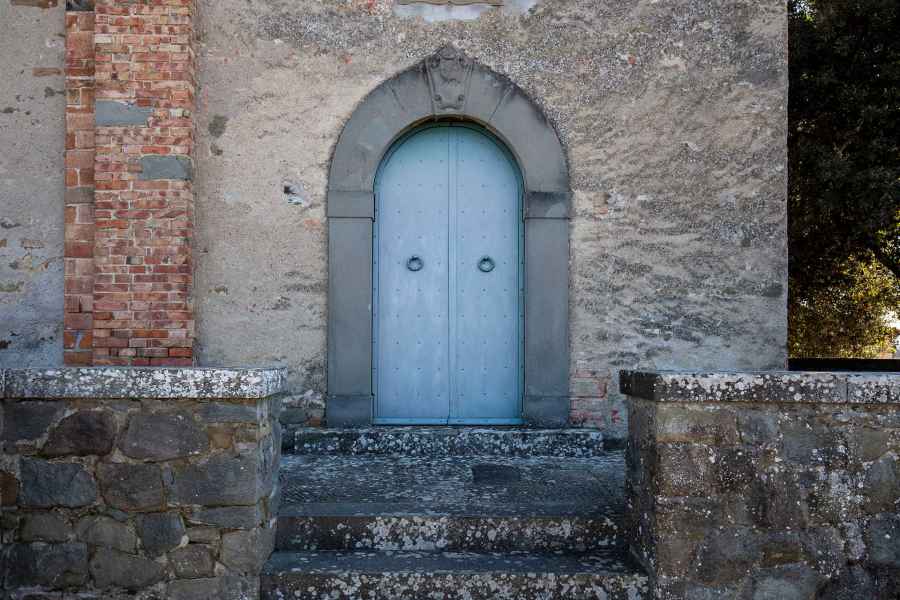 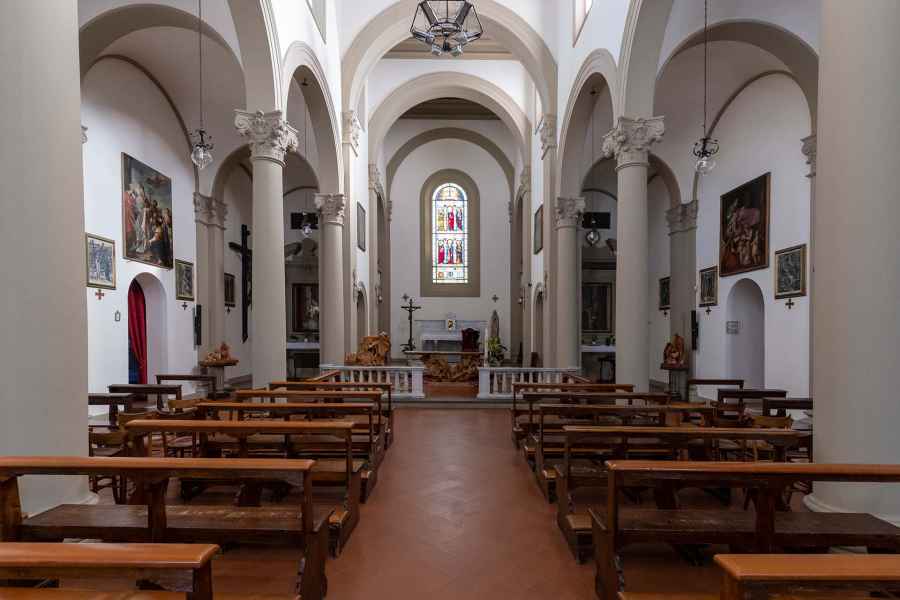 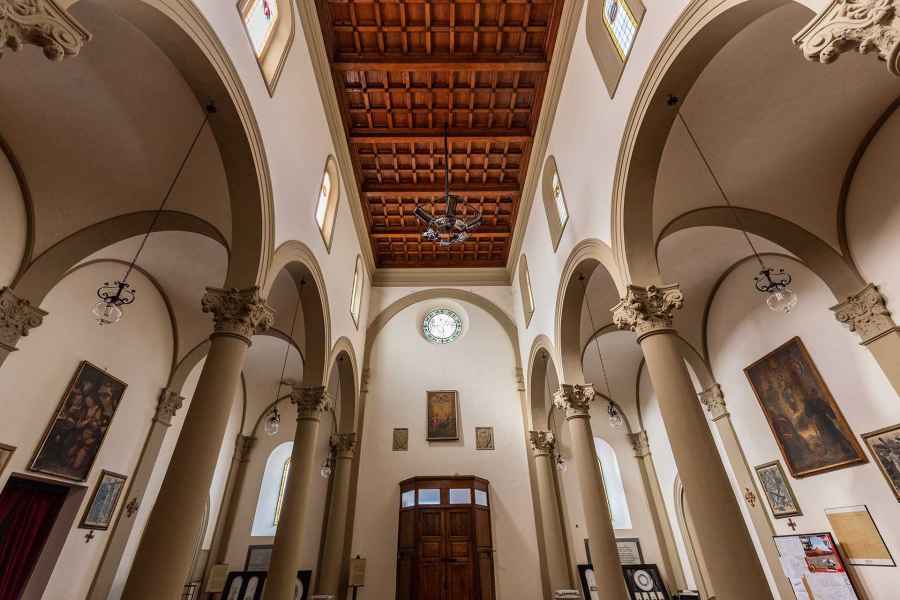 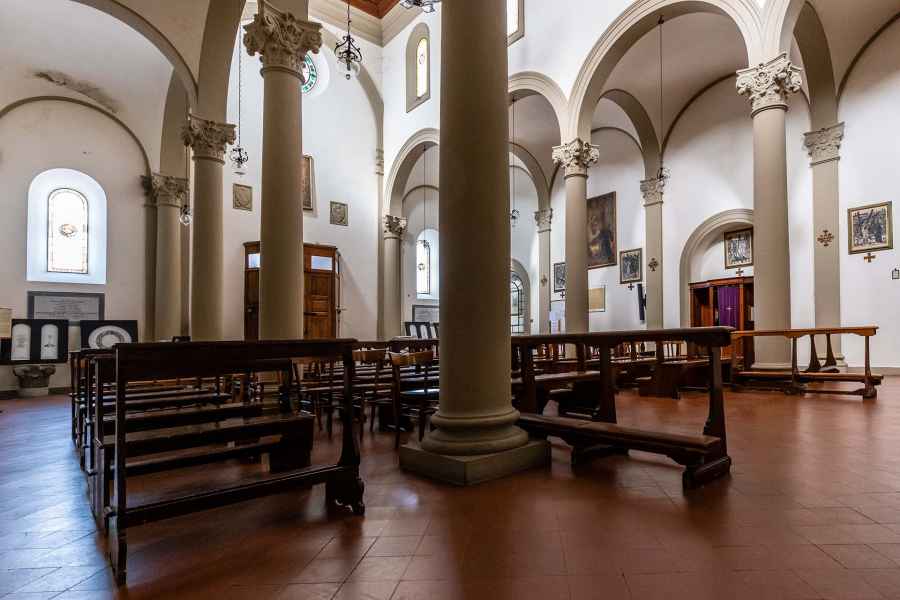 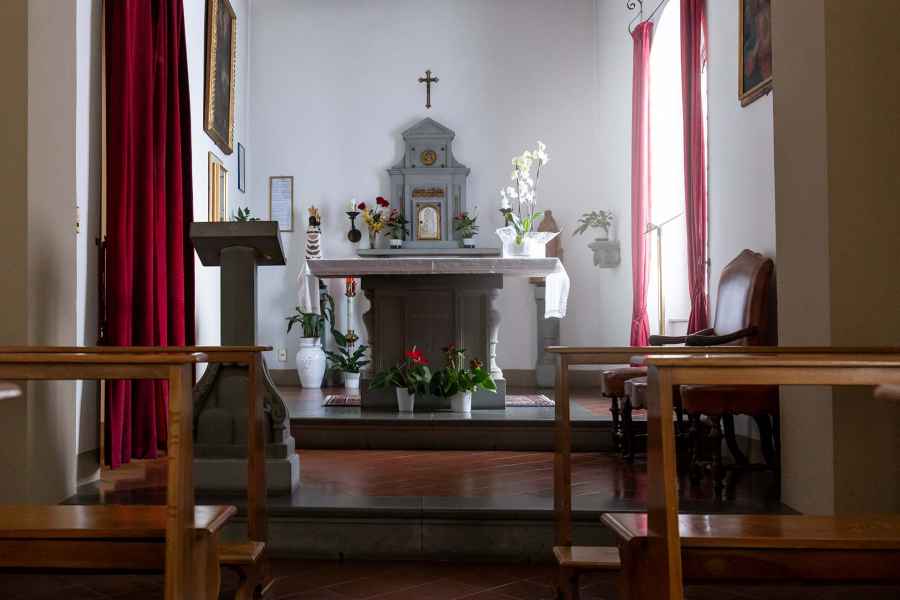 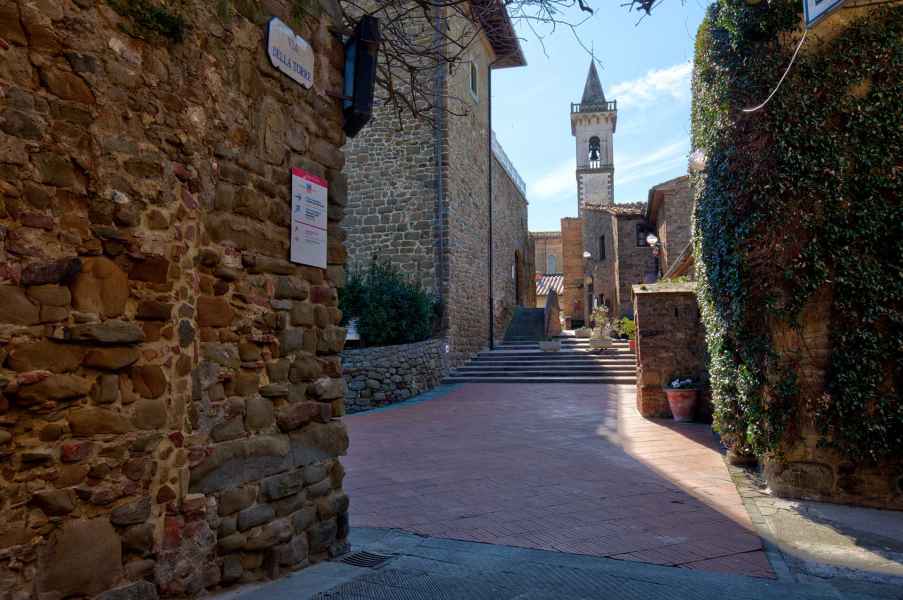