The history of Fucecchio, a castle founded on the left bank of the Arno, is strongly linked to its position. It stood on the point where that important waterway crossed the most highly frequented terrestrial route of the Early Middle Ages, the Via Francigena, which crossed the whole of Tuscany from north to south. In correspondence with this important junction of water and land routes, one of the major noble families of 10th century Tuscany, the Cadolingi, founded an abbey and a castle, the castle of Salamarthana, later Ficeclo. For centuries Fucecchio maintained that strategic role that made it a focal point, disputed by various competing powers throughout the Middle Ages. When Leonardo depicted Fucecchio in the early 16th century in his famous bird's-eye view of the Arno Valley (Windsor Castle RL 12685), he observed it at the point in time when the ancient Cadolingian castle had already been transformed into a large, walled village, strengthened by the 14th-century Rocca Fiorentina and dominating, with the other villages newly strengthened at the time of the 14th-15th century wars, a desolate rural landscape.

A place called Ficeclum/Figiclum appears in written sources with certainty from the early 11th century. That toponym indicated the area between the slope of Fucecchio and the Arno, which at the time was much closer. Here an oratory dedicated to the Savior had already existed for some time, founded by the Count Cadolo dei Cadolingi and transformed into a monastery around the year 1000. The place chosen to found, and then strengthen, San Salvatore was selected on the basis of the presence of a bridge over the Arno, the Bonfiglio bridge, where the burgo de Ficeclo had developed. At this time, at the beginning of the 11th century, the noble family took root in these places more strongly. It was Count Lotario, son of Cadolo, who took the initiative to build a castle—ubi dicitur Ficiclo—a little higher up on the hill. The hill was called Salamarthana, and in subsequent documents the castle would be identified with one or the other name, or with both, as for example in 1120, when the castle was referred to as Salamarthana sive Ficeclo. At the beginning of the 12th century, a new settlement concentration developed alongside the fortified center, which was built around a new Cadolingian foundation. Following the disastrous flooding of the river that struck the village of the Bonfiglio bridge in 1106, the church of San Salvatore was destroyed, and the noble family decided to rebuild the family monastery on the heights of Salamarzana, near the castle, to be sheltered from similar, uncontrollable disastrous events. On the heights of Fucecchio, two distinct population concentrations thus developed, the castle and the village, built around the new abbey of San Salvatore. The castle had a noble residence, a high stone palatium, of which some traces remain at the base of the so-called Torre Grossa, inside the 14th-century Rocca complex. At the origins, this was probably the only defended nucleus of the Cadolingian castrum.

The small hill on which the family abbey of the counts was rebuilt at the beginning of the 11th century, though still remaining outside the Cadolingian castle, was included in a new wall circuit only decades later, in 1187, when Henry VI authorized the construction of a castrum on the Ficechi hill. Of this 12th-century castle, only a few indications survive in the later documentation. For example, the Porta vecchia, located in the current Piazza Niccolini, was certainly one of the doors of this second wall circuit. The roads that came from the Arno Valley converged at this access, most importantly, the Francigena. The pilgrimage road, once past the Arno, continued in the direction of Fucecchio, entering the castle from the gate that would be called the Porta vecchia, then going out on the opposite side, to continue toward the Cappiano bridge, and then to the Cerbaie. Along the roads that started from the castle gates during the course of the 13th century, the towns of the future "contrade" of Fucecchio were formed, a village that, by now, was in full expansion. The enclosure of the villages within a new circuit of walls, built at the end of the 13th century, was carried out within the framework of a policy of general "militarization" of the road, a policy implemented by the city of Lucca in an attempt to control growing pressure from Florence.

By the last quarter of the 13th century, the new walls had almost been completed. The circuit had been primarily constructed of bricks, but there were also plenty of restorations made of earth, and of projecting wooden elements (bretèches) at the summit. Six gates were opened, all of which can still be localized today, even if no material trace remains. A late 16th-century map of the Capitani di Parte Guelfa, recently discovered, shows the entire circuit of the walls of Fucecchio, with the succession of gates and wall towers built at the end of the 13th century. The commitment to fortify the entire inhabited area of ​​Fucecchio responded to a broader project aimed at controlling terrestrial communications, at a point where the route was necessarily forced by a series of junctions, namely the crossing of waterways: the bridge over the Arno and the bridge over the Usciana (Cappiano). These two street structures were also fortified: the bridge over the Arno was rebuilt in stone in 1261 and defended by a tower added in 1282. The year before, the Cappiano bridge was also equipped with a defensive tower. According to a recent thesis by A. Vanni Desideri, this articulated system of control was probably put in place by the city of Lucca, with the intention of putting a stop to the expansionist aims of Florence. Strengthening and controlling the system of obligatory passages of the road toward Lucca, with the bridge over the Arno, the castle of Fucecchio, and the bridge over the Usciana, in close succession, meant ruling the border.

Fucecchio and the Cerbaie landscape at the time of Leonardo

This articulated device for control, put into place by Lucca at the end of the 13th century, ended up in the hands of the enemy after a few decades. In 1325 the Cappiano bridge had been neutralized by Florentine troops, and soon the Rocca would be erected by Florence, on the highest part of Fucecchio, where once the castle of the Counts Cadolingi stood. The ancient Cadolingi palatium became one of the towers of the innermost circuit of the Rocca Fiorentina system. The landscape of the mid-14th century Fucecchio hills is frozen in time, as in a snapshot, in the famous Leonardo map of the Windsor Castle collection RL 12685. We can see two of the three strong points of the system, built by Lucca and enhanced by Florence: Fucecchio enclosed within the late-13th-century walls, on which stands the 14th-century Rocca Fiorentina, and the fortified bridge of Cappiano. The bridge over the Arno is not shown because at that time it had already collapsed due to the ruinous and frequent floods: the map of the Capitani di Parte Guelfa, from a little bit later, shows the only piers of that bridge. At the time when Leonardo depicted the landscape of the Arno at Fucecchio, the situation regarding settlements had profoundly changed by comparison with the previous period. The hills of the Cerbaie, once densely inhabited, had been almost totally abandoned, due to the negative consequences from the mid-14th-century plague and the wars that, for over two centuries, had rendered those lands unsafe. The two castles without names on Leonardo’s map, which we can see on the southern edge of the Cerbaie—probably Montefalconi and Santa Maria a Monte—must have been, at that time, the only two villages still retaining vitality in a desolate landscape, quite remote from what it had been for centuries: the mainstay for the numerous populated settlements on this part of the Valdarno.
Texts by
Silvia Leporatti / English translation by John Venerella
Related resources
Related places
Gallery 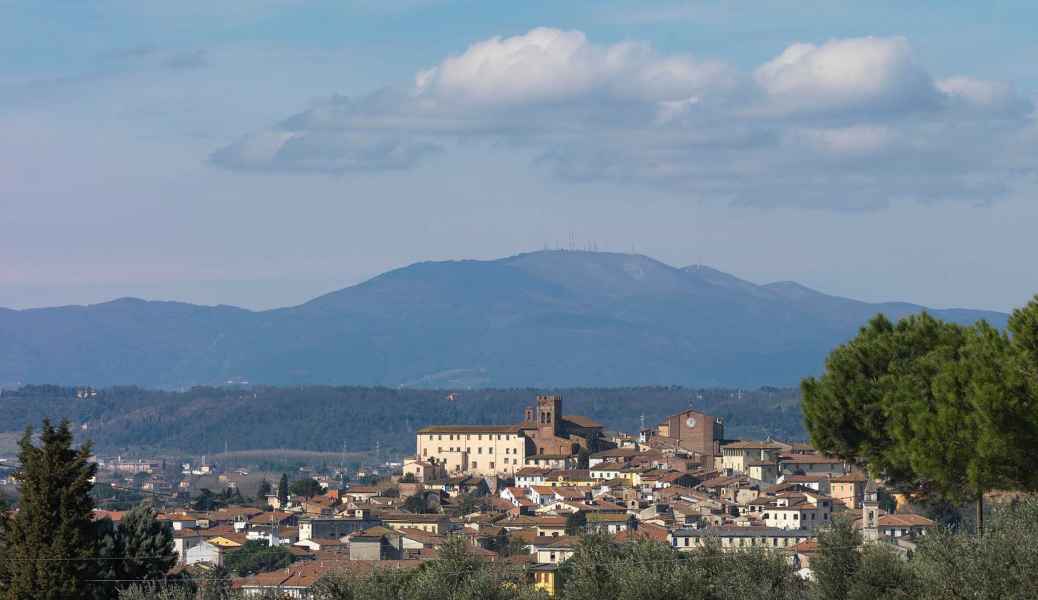 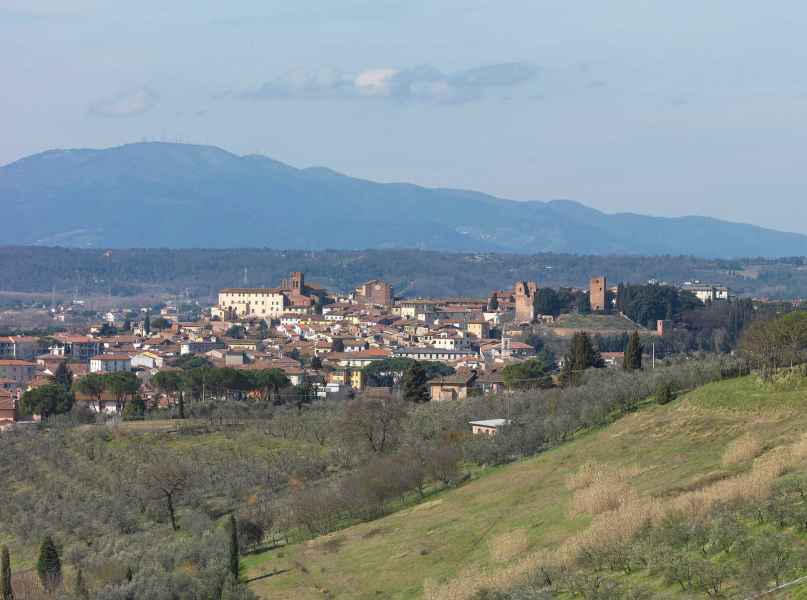 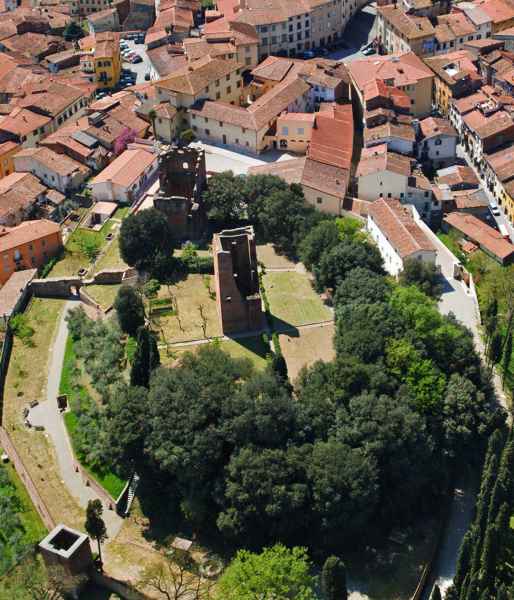 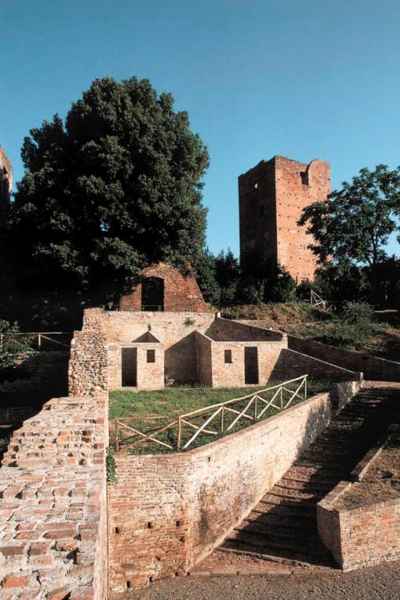 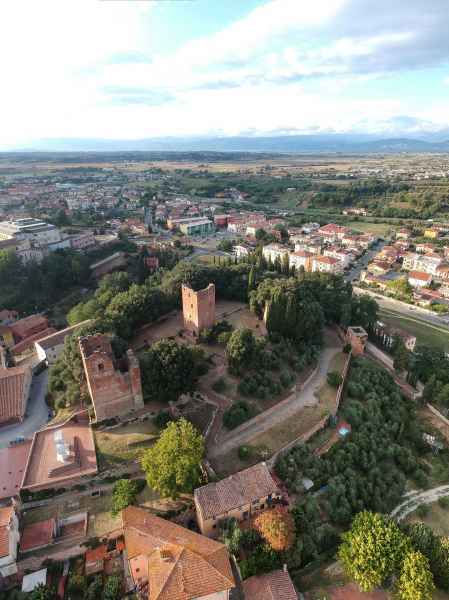 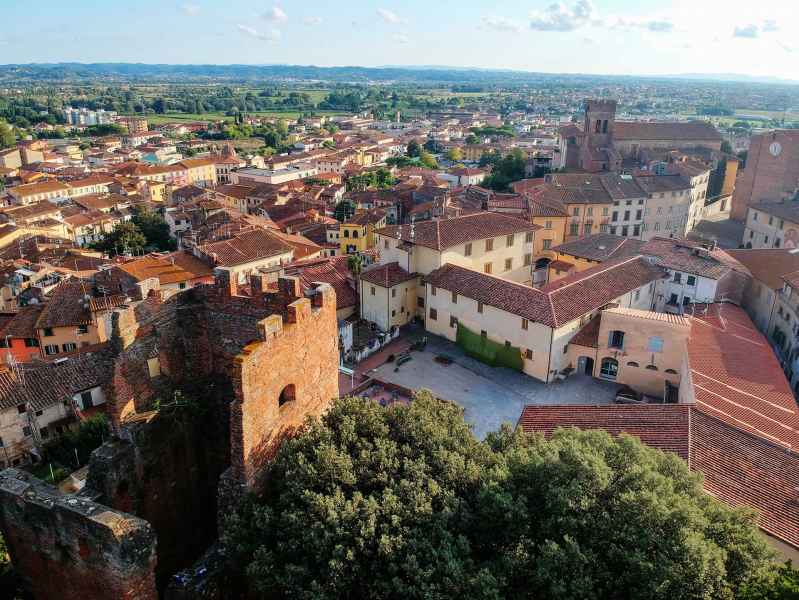 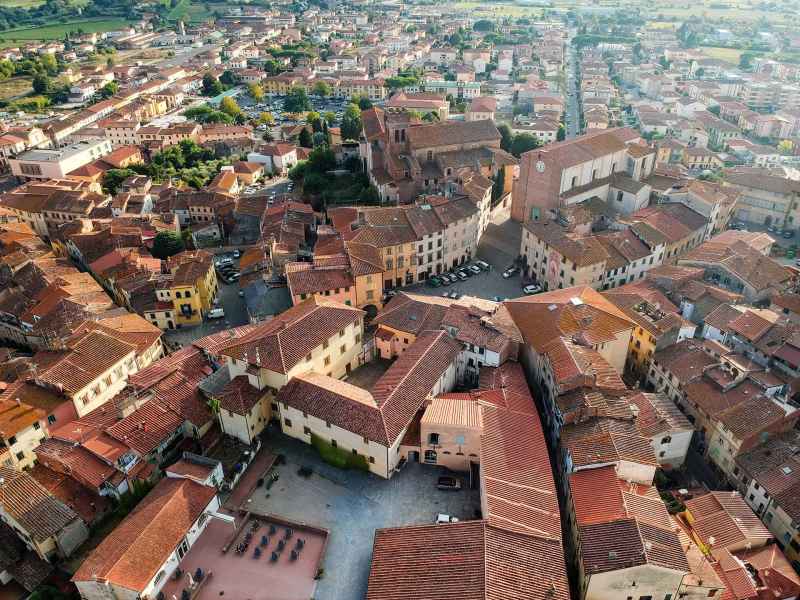 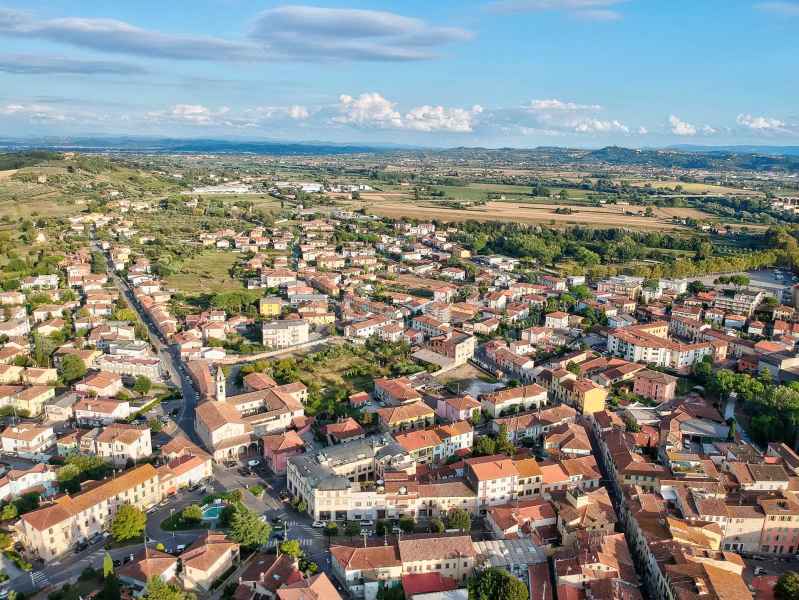 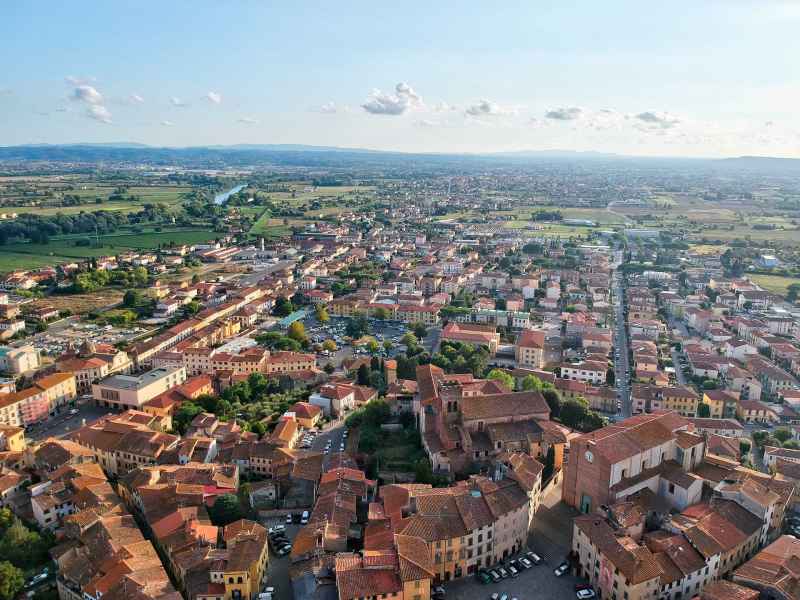 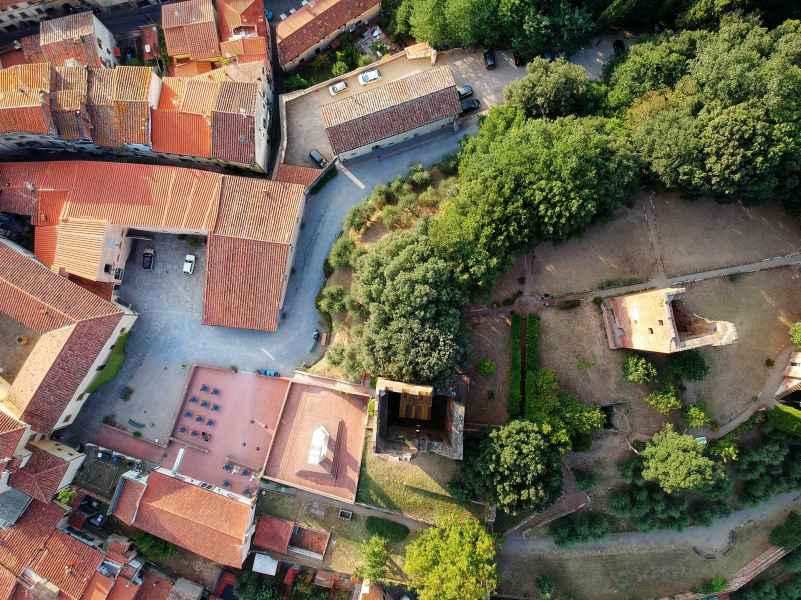 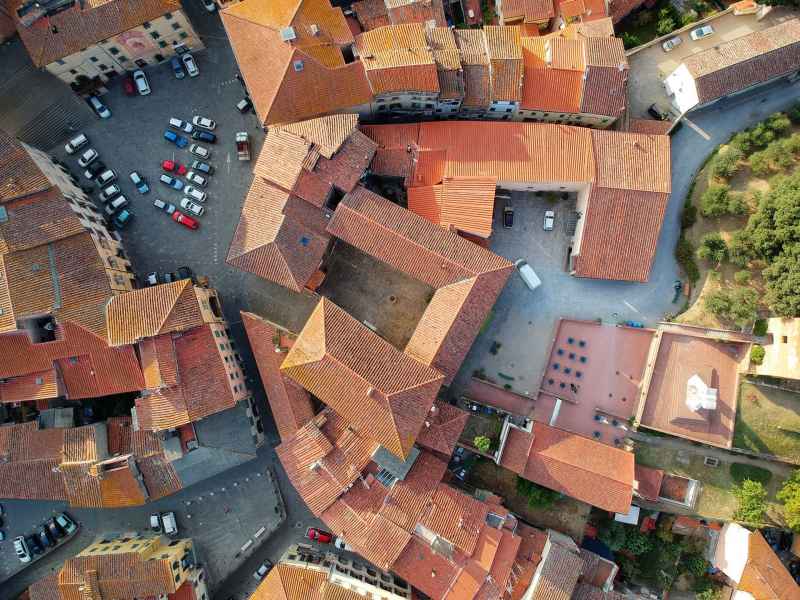 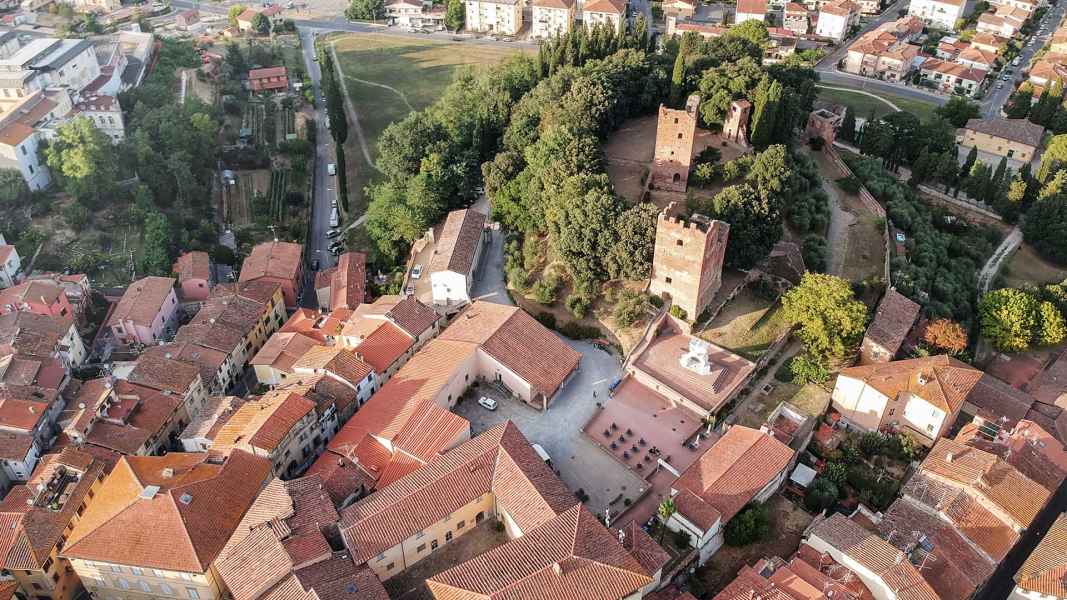 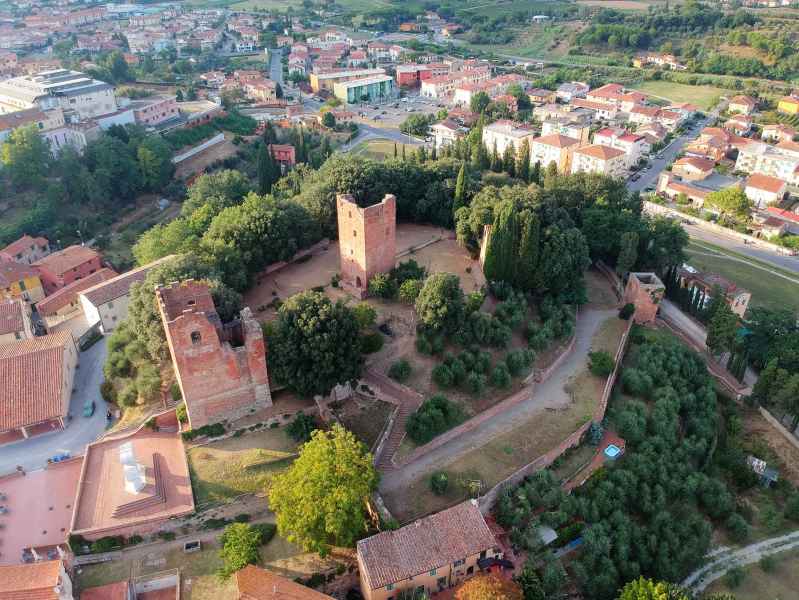 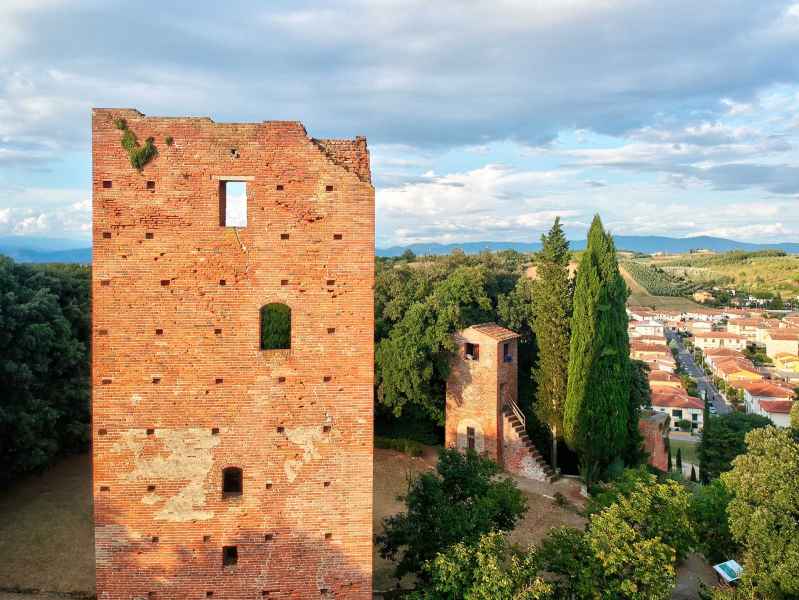