To recognize Pontorme today, one must look within the network of streets of the modern city of Empoli, those that revolve around the church of San Michele Arcangelo, which was originally the castle church of Pontorme. The castle of Pontorme was actually tiny at its founding, at the beginning of the 12th century. Only in the late Middle Ages did the extramural village develop, growing along the Via Pisana and defended by surrounding walls in 1365, when it had already long been one of the castles of the Florentine contado. In the weave and characters of the building fabric of today, we can recognize the traces of the streets and houses of the village documented in the 14th- and 15th-century statutes. This was the castle that Leonardo depicted in his famous view of the Arno Valley, Windsor Castle collection RL 12685: a walled village with no fewer than six wall towers, crossed through by the straight tract of the Via Pisana, directed toward the nearby Empoli.

The curtis of Pontorme, the Cadolingi, and the castle of the Counts Alberti

The first records of a population center in the Pontorme area date back to the early Middle Ages and refer to a royal curtis called Cortenuova, the same name borne by the community (popolo di Santa Maria a Cortenuova), which would become part of the small rural town of Pontorme centuries later. There is, however, a curtis of Pontorme, documented in 1099, in reference to the Cadolingian abbey of San Salvatore of Fucecchio, as testimony of a past in which Pontorme, perhaps, had also been part of the possessions of that important noble family. After 1113, in the aftermath of Count Ugo’s dying without an heir, as the last exponent of the family, the lands of Pontorme merged into the estate of another noble family. Count Ugo’s widow, in her second marriage, married Count Tancredi Nontigiova of the Alberti, who thus absorbed a series of Cadolingian possessions, including Pontorme. In 1117, Count Ildebrando of the Alberti exempted from certain taxes various fideles of the abbot of Fucecchio resident in loco et finibus Pontormio iusta ecclesiam Beati Martini. It was right there, on the spot where the church of San Martino still stands today, that the castrum was constructed. And this happened in those very years if, in 1120, we have the first attestation of a castrum quod vocatur Pontormum. On that occasion, the small Alberti castle had been besieged by Count Guido Guerra. In the immediate vicinity of Pontorme, in fact, only a year earlier, in 1119, the Counts Guidi had started an important initiative, the founding of the castle of Empoli, in clear antagonism with the very nearby presence of the Alberti in Pontorme. The initiative of the Guidi was an outright program to redefine the demographic balance of the area: the new castle of Empoli, founded around the site of the ancient parish, would have drained population from all the villages in the area. From that moment on, the history of the two castles, Empoli of the counts Guidi and Pontorme of the Alberti, so close to one another, would be closely linked.

The counts of Pontorme, Florence, and the civic tower bell

As happened to Empoli, Pontorme, as well, entered definitively into the orbit of Florence at the end of the 12th century. When Florence obtained control of the Alberti fortress of Capraia on the Arno border in 1204, it began the foundation of a new castle, Montelupo, which it populated, certainly, by removing population from the diocese of Pontorme. The Counts Alberti of the branch of the da Capraia, who had become protagonists, in 1204, of the surrender of the castle of Capraia, appear in the middle of the 13th century to have taken up residence in the nearby castle of Pontorme. From that moment on, the exponents of this family of nobles of the contado would appear in the documents as counts of Pontorme, but the title did not correspond to any significant jurisdictional prerogative. Pontorme was, by this point, a castle of the Florentine contado. We can reconstruct the layout by examining the late 16th-century map drawn by the Capitani di Parte Guelfa. The extension of the 13th century castle was still that of the Alberti period. The piazza was the parvis of the church of San Martino, overlooked also by the ancient noble palace, with its tower, loggia, courtyard, and residential areas. At the eastern gate, the porta vecchia (the old gate), the town hall had been built, with a loggia and tower that were demolished only at the end of the 18th century. Until that point, the tower, which was one of the wall towers, housed the community bell made by the magistri fiorentini, Bonaguida de Florentia cum Rico, and dated 1278. It was the bell that marked the daily life of the small Valdarno municipality. In 1786, after the destruction of the civic tower, the bell was donated to the church of San Martino and lodged in the new bell tower.

At the time of the descent of Emperor Henry VII, in 1312, Florence had to deal with the systems of defense for the fortified villages near the war zones. The castle and village of Pontorme, being so close to Empoli, were a potential danger. On account of this, a series of measures were ordered, aimed at neutralizing any military use the enemy could make of them. The houses of the village were ordered to be cleared, in order that they would become inabile ad abitandum—unusable by the enemy—in addition to the order to remove the wooden structures that could be used for siege of the castle. Throughout the 14th century and beyond, the countryside around Pontorme was crossed through by different assemblies of armies on the move: gangs of German mercenaries in Lucca in 1315, the army of Castruccio Castracani in 1325, the knights of Pisa who rushed to the aid of Florence in 1343. In 1363, Niccolò, Count of Urbino, was stationed in the village of Pontorme, because the castle, as the inhabitants themselves complained, was too small to house squadrons of cavalry. In 1365 Florence decided to fortify the village that had developed during the 13th century outside the porta vecchia (old gate), the eastern gate. The road axis on which the built-up area developed was the Via Pisana, which ran parallel to the Arno, entered Pontorme from the east and came out on the west, to continue toward Empoli. Florence financed the construction of the new walls, guaranteeing a tax exemption for inhabitants who were supposed to contribute to the public work. Four years later, the inhabitants of Pontorme demanded further tax relief. The difficult economic conditions and the perennial state of war had affected the entire sector of the Empolese-Valdelsa, as we learn from the numerous petitions that the inhabitants of the castles of those lands submitted to Florence, in order to be exempted from the taxes that weighed so heavily on a population that was, by that point, decimated and impoverished.

This landscape of increasingly fortified castles, the only places in continuous restructuration within a landscape that was becoming increasingly desolate, and ever more left to the wild—this was what was viewed by Leonardo’s eyes when he drew the two towered castles of Empoli and Pontorme in his famous view of the Valdarno, Windsor Castle collection RL 12685, the only ones on the left of the Arno, from the confluence of the Pesa on downward. Pontorme is depicted as surrounded by the 1365 walls, fortified by no fewer than six wall towers. Leonardo also depicted, with a quite clear straight line, the Pisan road from Montelupo that crossed the bridge over the Pesa, reaching Pontorme, and then the very nearby Empoli. Along this road, the activities of the many inhabitants of Pontorme who worked as carriers had been developed, by their fighting with the continuous overflowing of the Arno, which in turn provoked the flooding of the Via Pisana roadway. In such cases, land transport was replaced by a service of small ferryboats, as we read, for example, in a Florentine provision from 1370: […] Et insuper strata qua itur Pisas adeo per dictas aquas [aqua fluminis Arni] inundatur in yeme quod seque expedit volentibus per dictam stratam transire facere se portari per naves […]. A wreckage of this same type of boat, very similar to the river ferry depicted by Leonardo (Codex Atlanticus, f. 27r), was found in 1981near Empoli. Its reconstruction and the original objects that were on board, including an anchoring chain and a caulker’s ax for repairs to the keel, can be seen in the archaeological section of the Museo Civico di Fucecchio. One of the objects on board recovered from the wreck was a steelyard, proving that the boat was used for transportation of people and goods.
Texts by
Silvia Leporatti / English translation by John Venerella
Related resources
Related places
Gallery 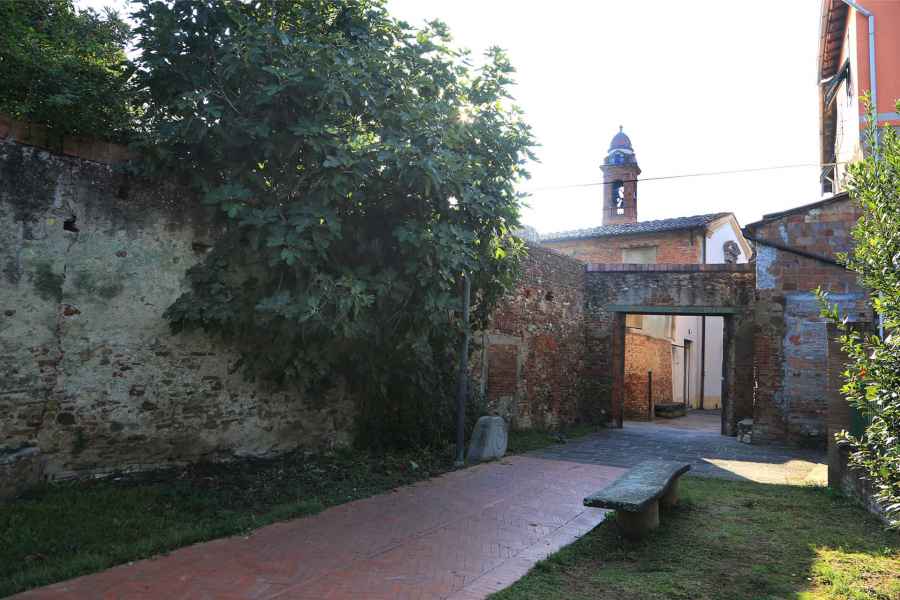 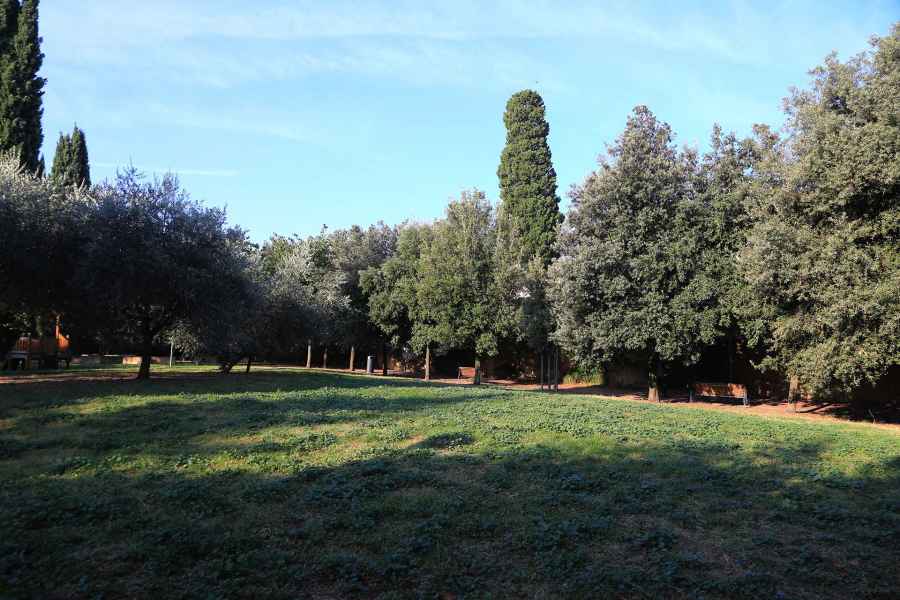 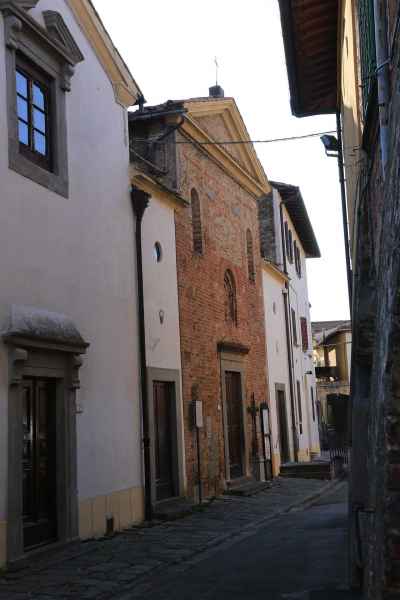 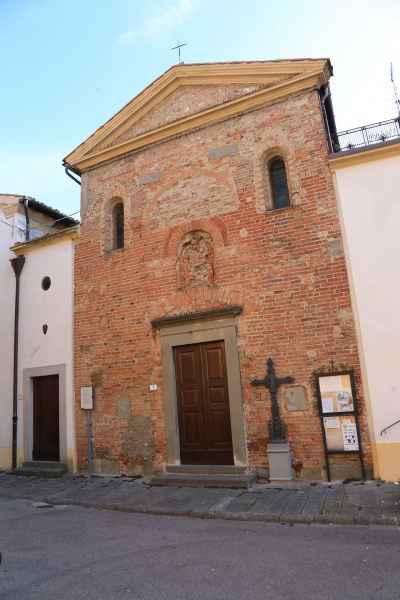 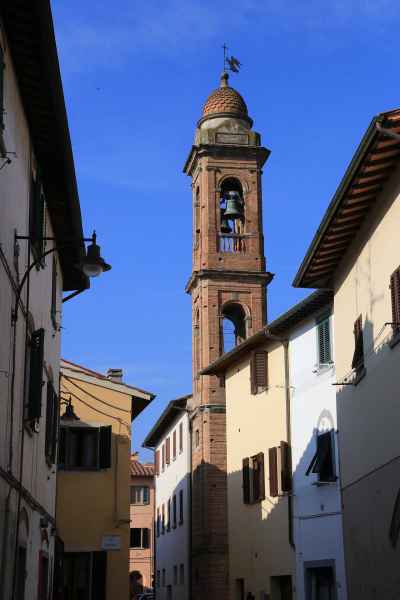 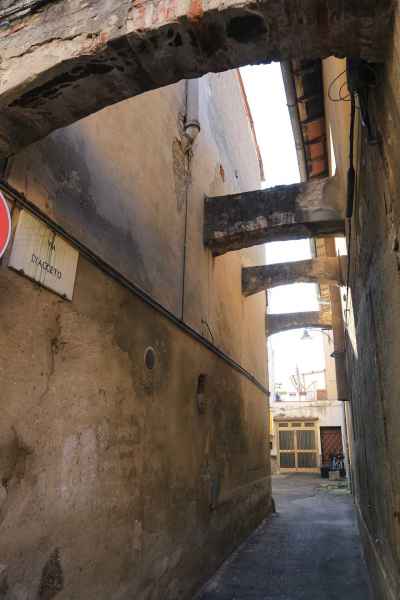 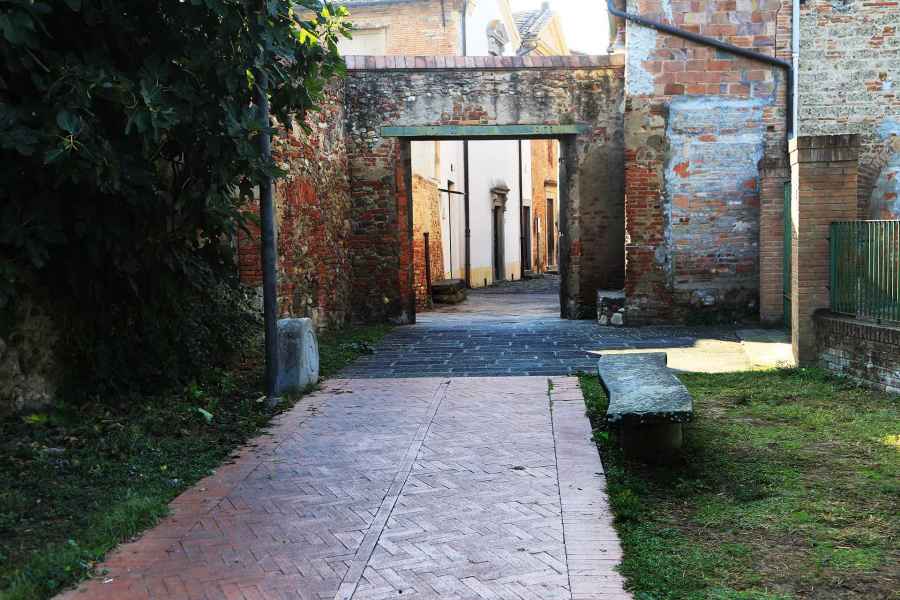