The toponym santosano indicated by Leonardo on the map RLW 12685 next to the drawing of a small settlement on the southern side of Montalbano, just below the castles of Vinci and Vitolini, refers to the Romanesque church of Sant'Ansano in Greti. The church has much older origins: from the Early Middle Ages its parish territory reached the boundaries of the diocese of Pistoia, which then reached almost to the Arno. Greti was the name used to indicate, at that time, the middle part of the Montalbano side extending from Castellina, near Capraia, to Cerreto Guidi. Sant'Ansano was called, simply, the parish church of Greti, when in the middle of the 13th century, it appeared distinctly as part of the possessions of the Counts Guidi.

The parish church of Greti and Sant'Ansano, the holy martyr of Siena

The first news of the church dates back to the late 10th century, when among the oldest churches of the Pistoian bishopric, the plebs in Creti was also listed. At that time, this parish territory represented one of the most peripheral portions of the vast diocese of Pistoia, including the one in partibus Greti. The church was originally named after St. John the Baptist, very common in baptismal churches. The dedication of the church of Greti to Sant'Ansano probably dates back to the early 12th century. It was after 1170, in fact, the year of the translation of the saint’s body inside the Cathedral of Siena—the city that was evangelized, according to tradition, by none other than the Roman martyr who lived between the last quarter of the 3rd and the beginning of the 4th century A.D.—that the cult of the saint began spreading. At the same time, the availability of relics from Sant'Ansano increased, along with the related trade, which in this case could have followed the route of the Via Francigena, from Siena to the slopes of Montalbano. The reconstruction of the church in Romanesque forms, therefore, can be traced back to the beginning of the 12th century, as we can observe in some parts of the church fabric still visible today along the road from Collegonzi to Vitolini and Faltognano.

Of the current building, only the long side visible on the outside of the church makes it possible for us to conceptualize what the Romanesque church of Sant'Ansano once was. The beautiful wall face in squared blocks of gray sandstone can be traced back to the time the church was rebuilt, which probably occurred with the arrival of the relics of Sant'Ansano and the new title. The type of processing of the ashlars and the singular installation, showing a unique mastery of the instructional technique and therefore the presence, on site, of skilled workers, finds comparisons with analogous structures of the Tuscan Romanesque dating from the late 11th and early 12th centuries, situating the parish church of Greti among the earliest of this constructional season. Particularly unique constructional and technological details can be observed on the wall, such as the cutting of the ashlars with trapezoidal faces. The perfect adherence of the segments, cut in shapes not exactly parallelepipedal, certainly performed on site by magistri stonemasons, is proof of a high level of technical knowledge. On this wall, the long northern side, a portal with a round arch opens, positioned on the part near the current facade. The portal is original, of the same phase of the long side, however, it is located in a non-central position due to the receding of the facade that occurred between the 14th and 15th centuries. The current edifice, which still maintains the basilica layout with three naves and the tiered facade, has been clearly remodeled in the volume which today is much lower than that of the original church. The Romanesque church was in fact much larger and the facade must have arrived to near the current road, covering the entire space of today's churchyard. The traces of this radical transformation can also be seen inside the church, in the two columns of the main nave, which are now incorporated into the internal face of the facade reconstructed in a receded position. Inside, the series of sculpted capitals supporting the broad arches of the central nave constitute a remarkable nucleus of 12th-century sculptural elements.

The parish church of the Counts Guidi and Florence

In the mid-13th century, the parish was part of the possessions of this noble family who controlled the territory of Greti for nearly two centuries. In the series of documents regarding the transfer to the city of Florence of the possessions of the Counts Guidi, there are also the shares of the plebs de Greti. The building was still the same large three-aisled basilica in Romanesque layout constructed of well-squared sandstone. With the sale in Florence, another season began for the church, and for the people of the parish church of Sant'Ansano, who suffered the consequences of the city’s expansionist policy on this side of the Lower Valdarno. It is within this context that the damage to the church and its reconstruction in reduced forms must certainly be interpreted. The new facade, again, with its tiered features, had an opening above the simple central portal, with visibly protruding archivolt and inset lunette. A positive trace of the passage under the city of Florence can be recognized in the only surviving work from the 14th century painting: a small panel executed around the mid-14th century depicting Sant’Ansano tra due angeli attributed to Puccio di Simone, one of the most interesting artists of the second generation of 14th-century Florentine painting, active in Florence and Pistoia between 1346 and 1362. The small panel is now displayed at the back of the right nave.

The parish church of Greti in Leonardo’s time

When Leonardo reported the small sketch of the church of santosano on the famous bird's eye view of Montalbano (RL 12685), he must have had before him a building different than the great Romanesque church that had governed the ecclesiastical territory of Greti during the High Middle Ages. The volume of the building had been reduced by a good bit during the 14th century, and then, when the church passed to dependency under the Certosa del Galluzzo of Florence in 1478, it was further modified. With the arrival of the community of monks, the church had to be renewed for questions of liturgical order. On the outside, a large porch with a pavilion roof was built, resting on cross vaults, with pediments inserted into the facade remain. The lunette of the portal, furnished with a new molded architrave, was adorned with a fresco depicting La Vergine e il Bambino fra i santi Giovanni Battista e Ansano. Inside, next to the entrance portal, Leonardo could have seen the fine hexagonal baptismal font in marble worked with bean-motif attributed to Baccio da Montelupo. At the end of the 16th century, the rear part of the building was modified for liturgical reasons: the original semicircular apse was replaced by the rectangular apse that today defines the choir. An image of the parish church of Greti dating back to this period is the one we find represented on the map of the Capitani di Parte Guelfa, bearing the toponym S. Giovanni in Greti et detto S. Sano. Even though the drawing is certainly stylized, it does, however, present some interesting details, such as the basilica plan with three naves of the church, seen in three-quarter view, with a tiered facade and a small bell gable. Above the central portal, we can see the window, now replaced by the oculus, and there is no remaining trace of the portico, perhaps no longer standing after the end of the 16th century. This, in general terms, is the aspect the parish church of Greti must have had during Leonardo’s time.

The transformations of the following centuries

In the late 17th century, the construction of the chapel of the Compagnia del Paradiso, which abutted against the northern side of the church, radically altered its external appearance. Even the facade was heavily altered with the construction of the broad loggia on pillars and the bell tower that can still be seen in the early 20th-century photos. The destruction of the loggia and bell tower due to the passage of the war front in 1944 created the opportunity for a restoration project of the parish church (Morozzi), aimed at restoring the Romanesque phase. With this in mind, the decorations and liturgical furnishings of the Baroque period were completely dismantled. The Chapel of the Compagnia was finally demolished in order to bring to light the northern side of the Romanesque church and the lateral portal, with a simple architrave and round arch in square stone blocks. The 17th-century bell tower was rebuilt in the same position, next to the church. Inside the building are the paintings that adorned two of the lost altars from the 17th-century church: the Liberazione di sant’Alessandro dal carcere, by Sienese painter Rutilio Manetti (1626) and the painting representing Santi Antonio da Padova, Bruno e Filippo Neri attributed to Giovanni Gargiolli, probably a painter from San Miniato's workshop of Mario Balassi. The marble ciborium shaped like a small temple on hexagonal plan visible at the back of the left nave dates to the 16th century, but the golden wooden dome is a remake from last century.
Texts by
Silvia Leporatti / English translation by John Venerella
Related resources
Related places
Gallery 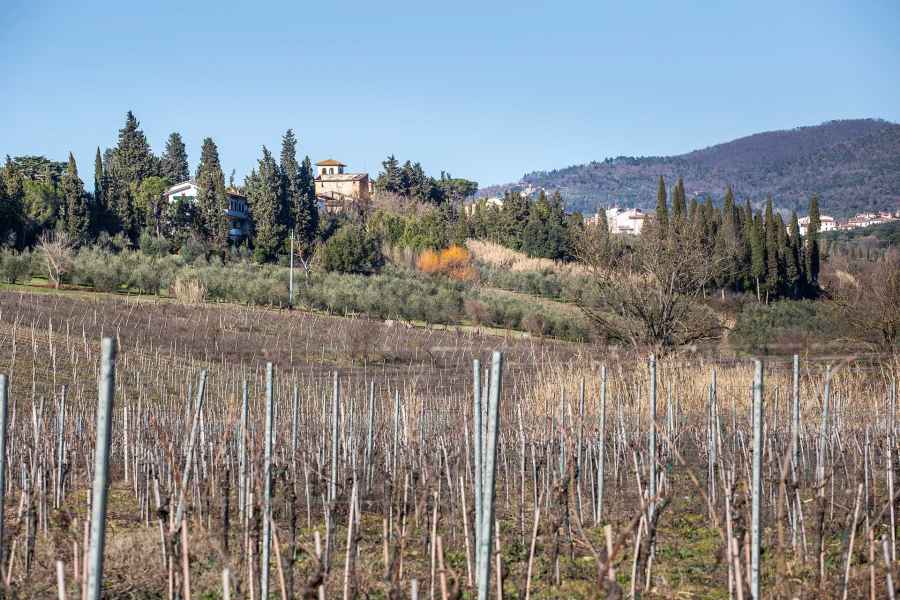 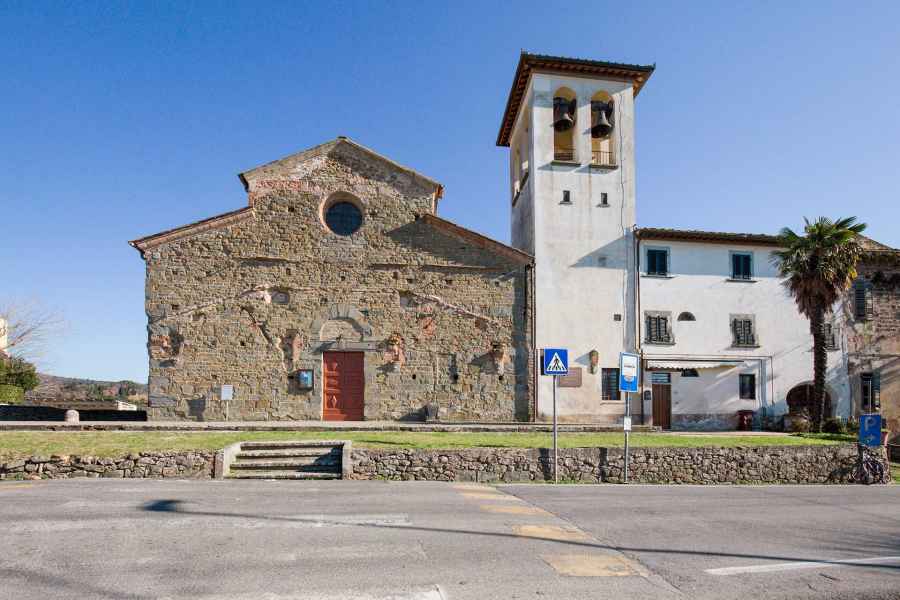 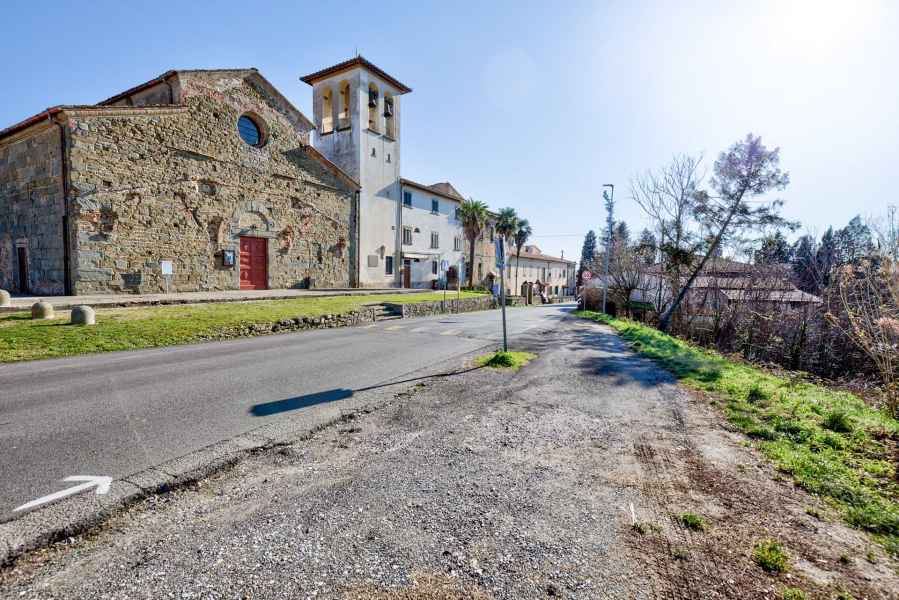 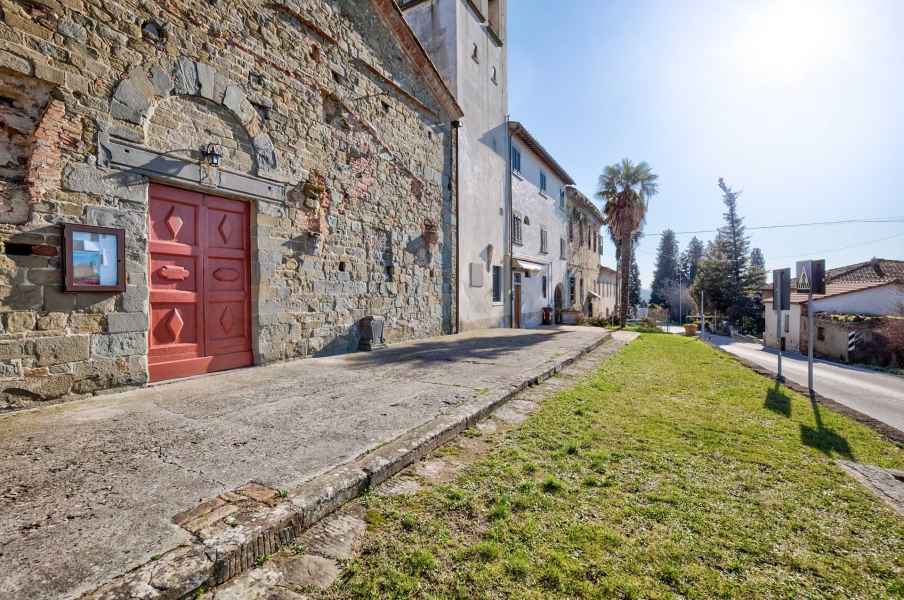 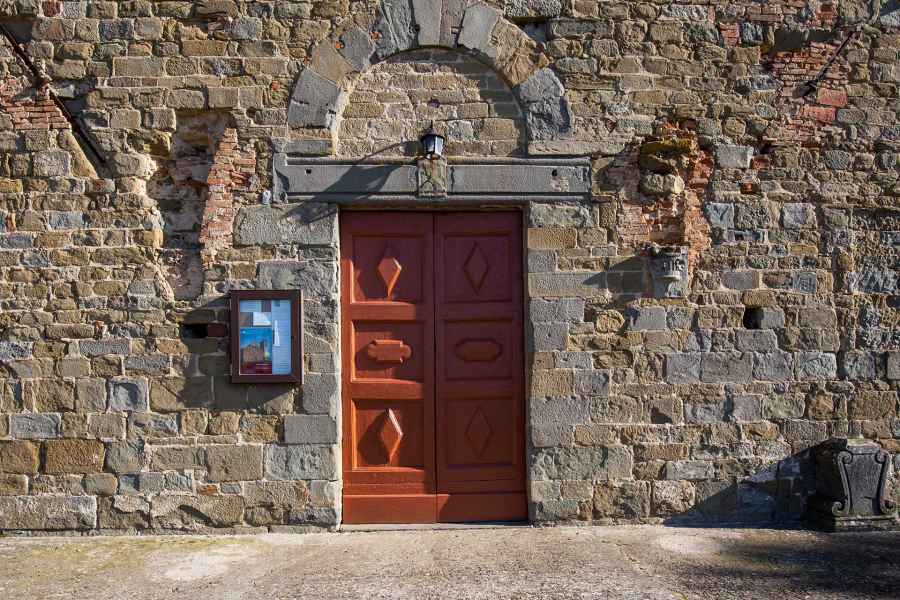 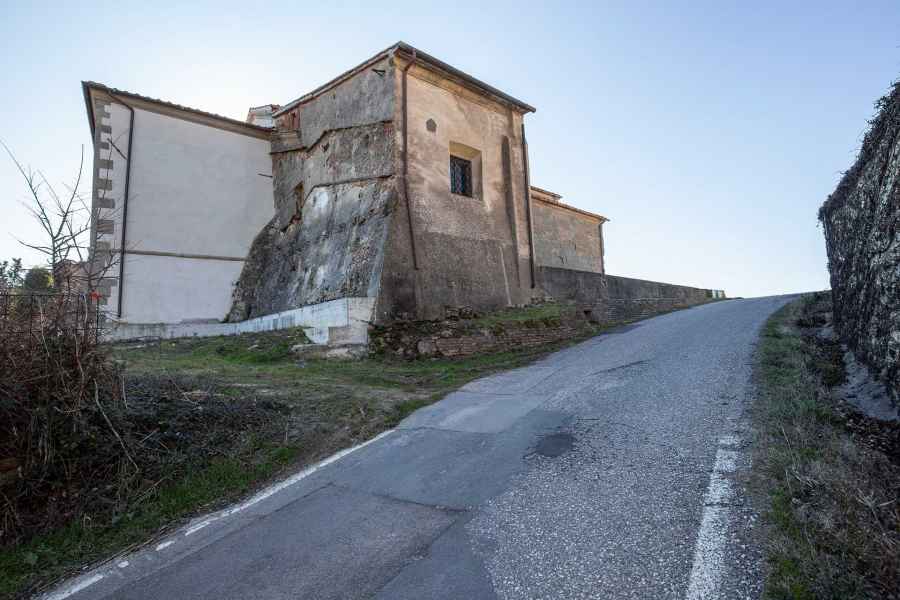 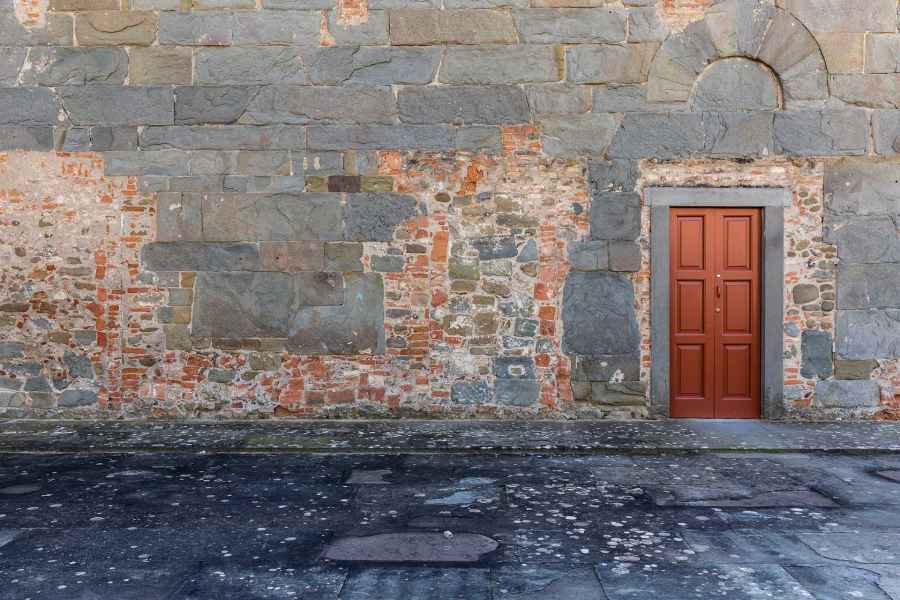