The small empty space between the narrow streets of the castle of Vinci has recently been involved in a contemporary art project. Now, the entrance to Palazzina Uzzielli, the new exhibition space for the Museo Leonardiano, opens onto the square, located at some distance from the historical headquarters. The new Piazza Guidi, redesigned by artist Mimmo Paladino, gives fresh balance to the two-pole system. The symbolic charge of the geometric shapes from Leonardo and of the engravings of Mimmo Paladino’s universe, inspired by the Renaissance polyhedron, give shape to an unusual and evocative contemporary urban space that accompanies the visitor. The materials used are limestone from the Apuan Alps, metal, and glass, which blend perfectly with the backdrop of the land of Leonardo.

With the competition for ideas, launched in 2003, the creators of the artistic project, Romano Nanni, Giacomo Dipietrantonio, and Mario Cristiani, intended to achieve the goal of providing a recognizable public identity for the new entrance, using the available spaces in an urbanistic and museological key. The area available, for historical reasons, was the cramped space of a glimpse into a medieval village; so the solution was not easy. Among the five proposals presented, that of Mimmo Paladino was chosen, to be built in 2006. The space of Piazza Guidi has become a physical and mental journey. The fulcrum of the new square is surely Leonardo's starry dodecahedron, in aluminum, signaling the entry of the new exhibition center dedicated to Leonardo’s work as engineer, scientist, and architect. It is a tribute to Leonardo, made through one of the geometric shapes best recalling the idea of ​​the Renaissance. Paolo Uccello, for example, created the image of this geometric shape for the marble-inlay flooring for the Basilica of San Marco in Venice. Leonardo's starry dodecahedra, also, were two-dimensional: these were the drawings that were commissioned from Leonardo to illustrate the final part of De Divina Proportione, the treatise on geometry by Luca Pacioli. Leonardo's starry dodecahedra were rendered with particular volumetric force owing to the use of chiaroscuro, characteristic of his drawing technique. From the starry dodecahedron in aluminum dedicated to Leonardo, the space is broken down and reconfigured in different planes, made with gray limestone slabs of the Apuan Alps, intersecting each other. The many stone surfaces are furrowed by typical incisions of Paladino’s universe, and lead to the short, paved path of Via La Pira, and then to the headquarters of the Museo Leonardiano at the Rocca dei Conti Guidi. The route overlooks the landscape of the Arno Valley and the Monti Pisani, which Leonardo represented in the drawings of his most famous maps.
Texts by
Silvia Leporatti / English translation by John Venerella
Related resources
External links
Gallery 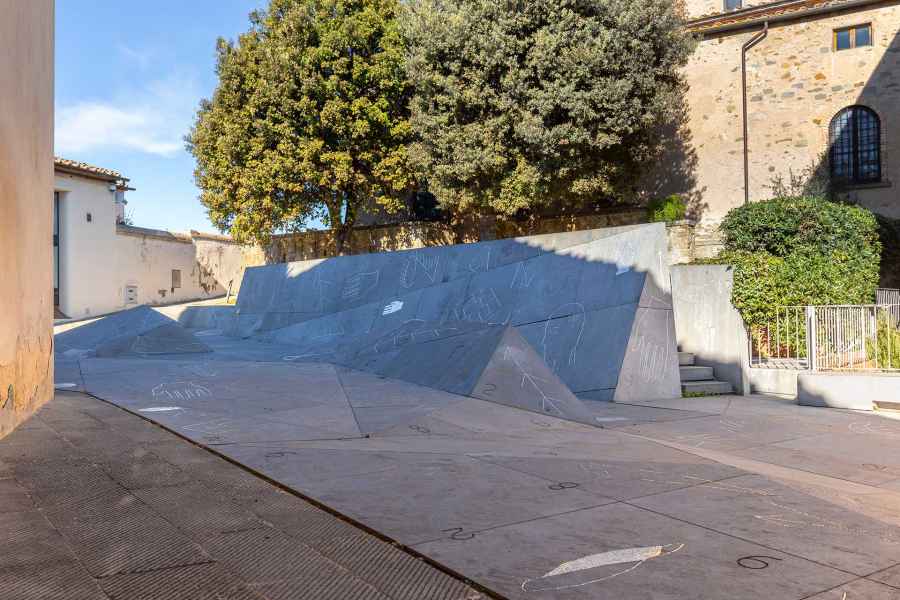 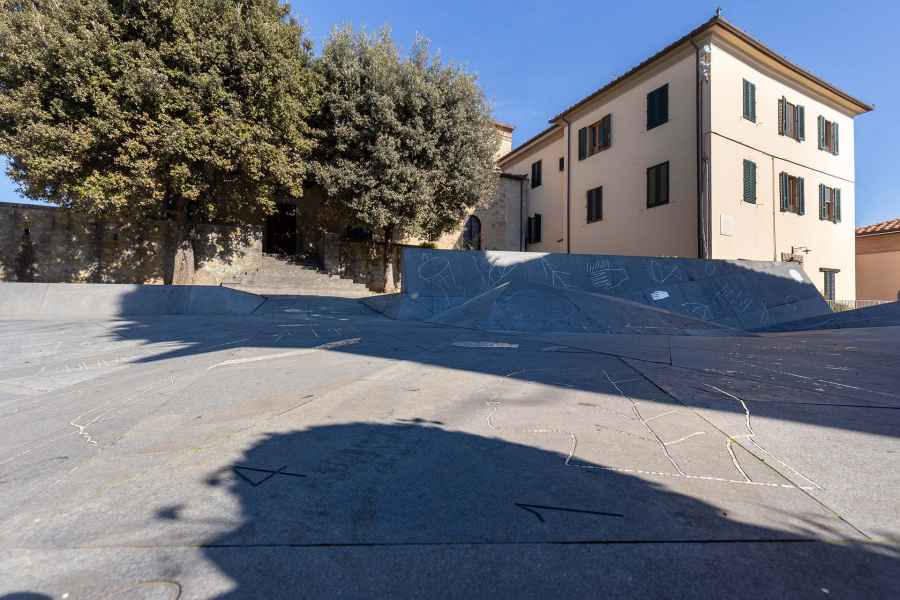 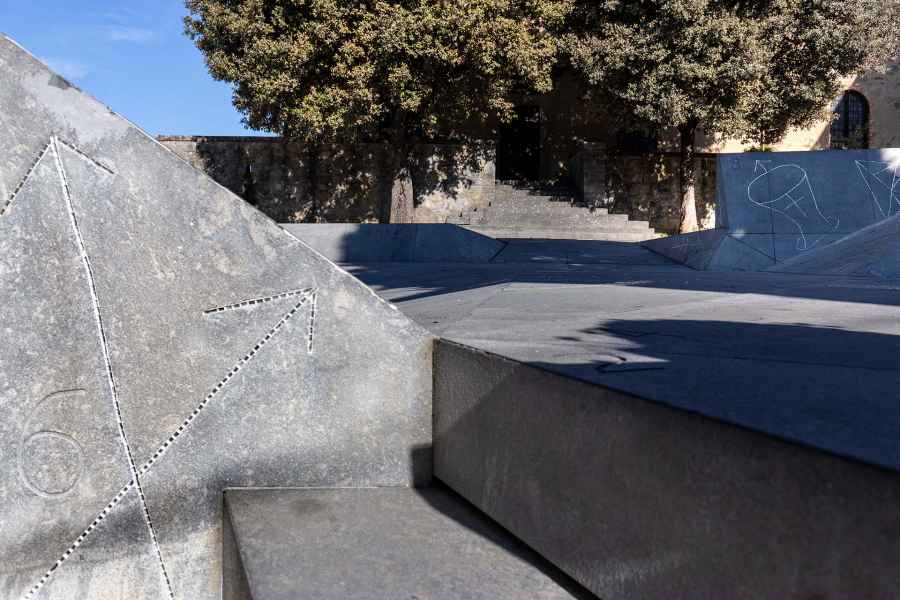 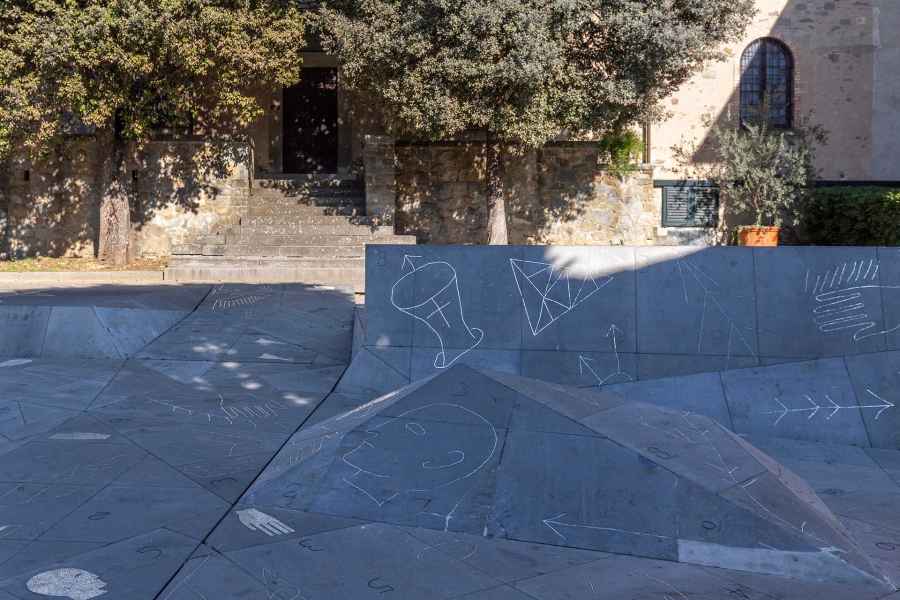 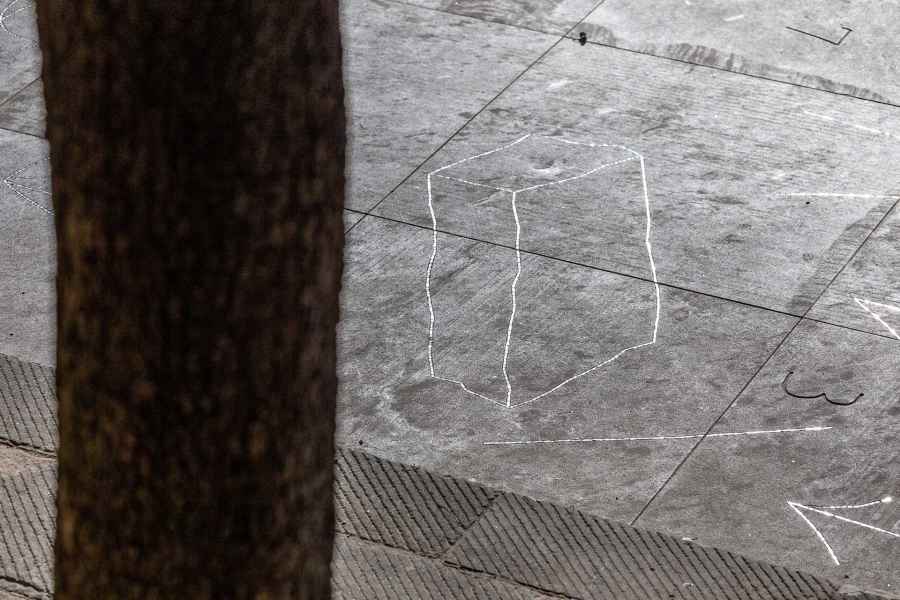