Montegufoni owes much of its appearance, a splendid villa in the Baroque style, to the contributions by the Grand Duke Donato di Ottaviano degli Acciaioli and his brother, Cardinal Nicola, who in the mid-17th century put their hands to the great project that completely redesigned its forms. Until then, Montegufoni had been the family country residence, and had the appearance of a common fortified villa in the Florentine hills of the 14th century. At the time the family—by this point, having obtained Florentine citizenship—had made a fortune owing primarily to the prestige attained by Niccolò Acciaioli at the court of the Anjou. It was in the form of a country residence-fortress that Leonardo depicted Montegufoni on the map of Windsor Castle collection RL 12278. Leonardo’s Monte Gufoni has the appearance of a castle surrounded by walls and fortified by a turreted central part, probably corresponding to the famous tower that was modified in 1546 to resemble the tower of Palazzo Vecchio. The fortress of the Acciaioli, in turn, probably occupied the site of an older castle, dating from the 12th century.

The castle of the Ormanni and the Counts Alberti

The fortified village, positioned quite close to the road to Volterra, belonged to the Ormanni, a family of castle lords of whom we have but little information, but who were most likely linked to the noble Alberti family. During the 12th century, as noted, the Counts Alberti significantly strengthened their sphere of influence and expanded the territories controlled within their dominion in the Valdelsa and toward the Val di Pesa, which were crossed by the fundamental artery, the Via Francigena, with the important junctions of the Via Volterrana. At that time the position of the Alberti in relation to Florence was complicated considerably, also because of the ascent of Goffredo degli Alberti to the threshold of bishop of Florence. In this regard, we recall the donation made in 1126 by the de Catignano (formerly a Cadolingi castle), in favor of Bishop Goffredo, of a series of localities situated on the hills between the Elsa and the Pesa, which also included the nearby castles of Santa Maria Novella, Trecento, and Pogni. It was effectively within the context of the progressive growth of the conflict between the noble family and the city of Florence that conditions leading to the destruction of Montegufoni matured. The first attestation of the castle coincides precisely with the information about the violent military attack by Florence in 1135.

Of the events of Montegufoni we have no information until the end of the 13th century, when it was purchased by the Acciaioli family, originally from Bergamo, who arrived in Florence at the beginning of the 12th century. On the site of the ancient Alberti fortress, the principal structures must have been restored, including the castle defenses, since in 1312 Montegufoni was claimed by Emperor Henry VII as a castle belonging to the Empire. There is no further information of the castle nor of its state of conservation until 1310, when Montegufoni was indicated as the place Niccolò degli Acciaioli was born. During the 14th century, the events relating to this personage were linked with the history of the ancient castle of Montegufoni. Niccolò, the most important exponent of the family, acquired prestige in the House of Anjou, holding the office of the Great Seneschal of the Kingdom of Naples. He had the protection of, among others, the Princes of Taranto, so that on the occasion of the 1345 wartime events between the Kingdom of Hungary and that of Naples, Montegufoni became the place where Prince Ludovico of Taranto found protection. At the time Niccolò had just put his hand to the project of the monumental Certosa di San Lorenzo (Galluzzo), while in those same years the Montegufoni residence must have had the appearance of a simple walled village. On the site of the ancient castle of the Counts Alberti, the buildings that made up the country residence of the Acciaioli were built in different times, but probably between the end of the 13th century and the beginning of the 14th century. The various building elements overlooked a central courtyard, and were probably surrounded by a curtain wall. Also on the square stood the church dedicated to San Lorenzo, embellished during Niccolò Acciaioli’s time by the wooden crucifix made by Taddeo Gaddi, a pupil of Giotto. At the end of the 14th century, Montegufoni was a village surrounded by walls, or at any rate, composed of buildings closely positioned to one another, giving the place the appearance of a small country fort. During the second half of the 14th century, when the tower was built, Donato del fu Iacopo Acciaioli, nephew of Niccolò, frequently resided in Montegufoni, as evidenced by the numerous letters he sent from this location. In 1372, there was even denouncement of a murder attempt, sustained by Donato Acciaioli himself, as he left the church to return to his home, in the keep of Montegufoni (intrans abitationem dicti casseri de Montegufoni, dum ab ecclesia rediret).

For more than two centuries the country residence still maintained the appearance it had attained during the time of the Acciaioli, as Montegufoni was represented in a late 16th-century print as a well-walled fortress, composed of several buildings, over which rises the tower of Donato Acciaioli (1386), by this point (1546) furnished with the renowned attributes (overhang on corbels, crenellated bell tower) inspired by the model of the Arnolfo tower of the Palazzo Vecchio. Montegufoni must have looked like this in the 16th century, despite the fact that, already in 1427, some tax declarations by castle residents complained about the poor state of conservation of some of the buildings, describing one, for example, as a “ruined and run-down building, a shack, as anyone coming and going on the street can see for himself.” Nonetheless, at the beginning of the 16th century, Leonardo depicted Montegufoni as a castle that was still functional from the point of view of defenses. The old fortress of the Acciaioli was still one of the strong points of the Val di Pesa, and Leonardo represented it as a properly walled castle with a central turreted part (the donjon). Only in the 17th century would Montegufoni be radically transformed into the evocative Baroque villa we can admire today.

The castle of Montegufoni after the age of Leonardo

The fortified village of the Acciaioli was radically transformed in the mid-17th century, when the entire property passed into the hands of Donato di Ottaviano Acciaioli, named senator, like his father, by the Grand Duke Ferdinando II. The various buildings of which the small fortress had been constructed between the 14th and 16th centuries were united into a single building. A further architectural elevation of the complex gave the new building an imposing and majestic appearance. The great facade facing north and the gallery constructed over the old portico were built through contributions from Donato's brother, Cardinal Nicola Acciaioli. In the same period, the church of San Lorenzo was transformed into baroque forms, joining the 13th-century building of worship to the rectory. The destiny of the beautiful baroque villa surrounded by gardens with water fountains followed that of the Acciaioli. The decline of the ancient owners, at the end of the 18th century, coincided with the sale of the villa of Montegufoni, which was subdivided in order to exploit its real estate potential. Only with the beginning of the 20th century were the rooms of the villa newly reunited into a single property, that of Sir Osbert Sitwell, a wealthy English writer who put his hand to a long project of restoration of the castle, giving it the appearance we see today.
Texts by
Silvia Leporatti / English translation by John Venerella
Related resources
Related places
Gallery 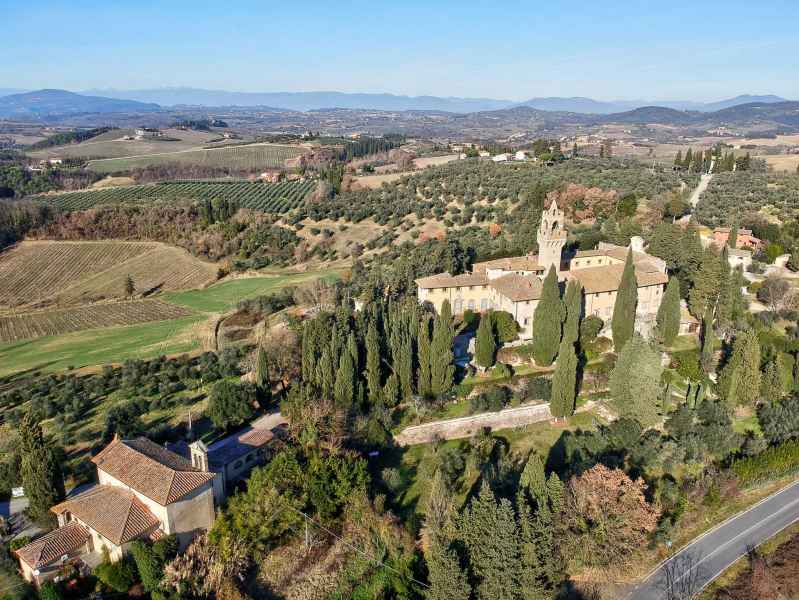 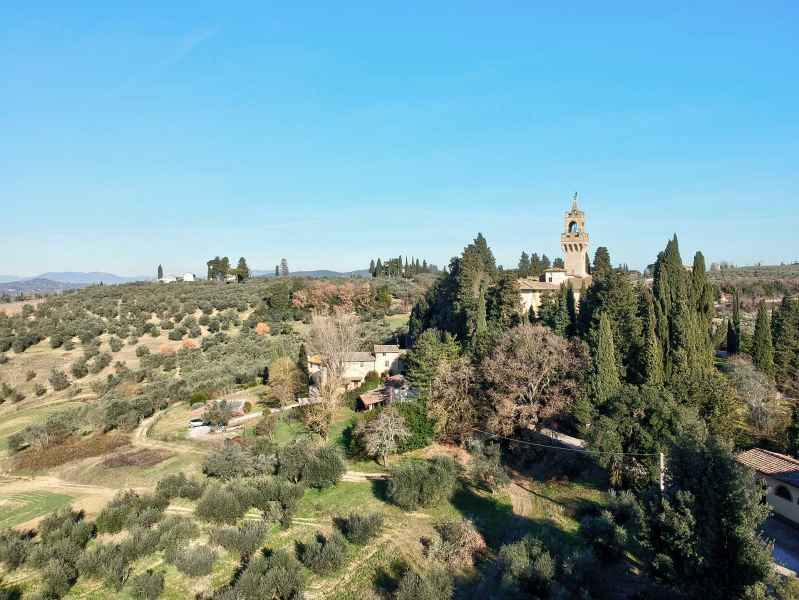 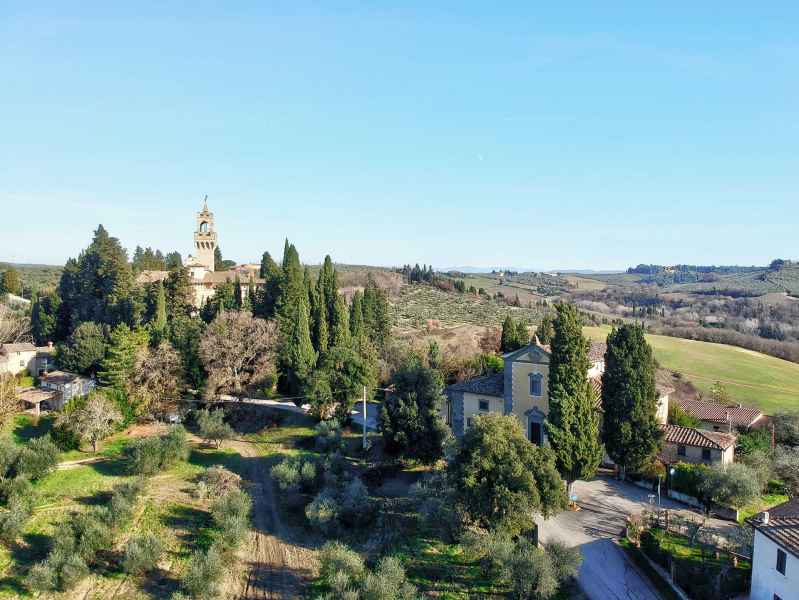 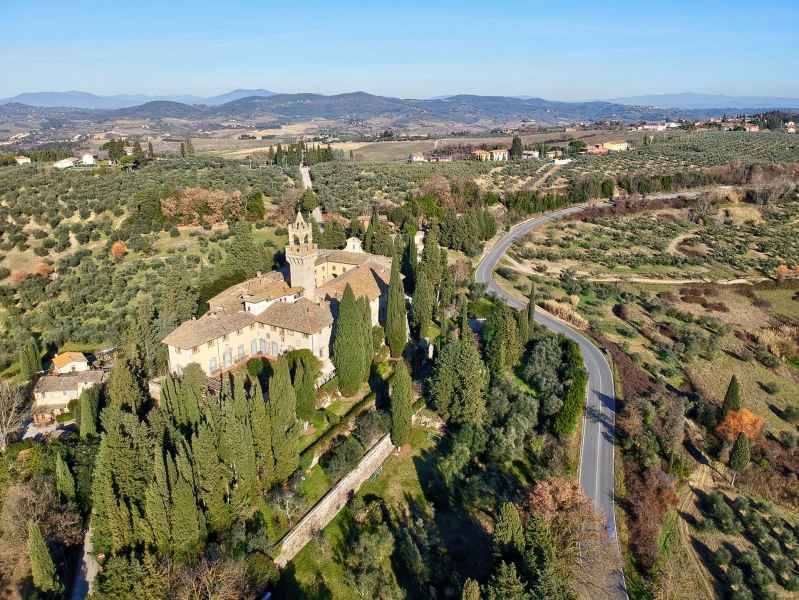 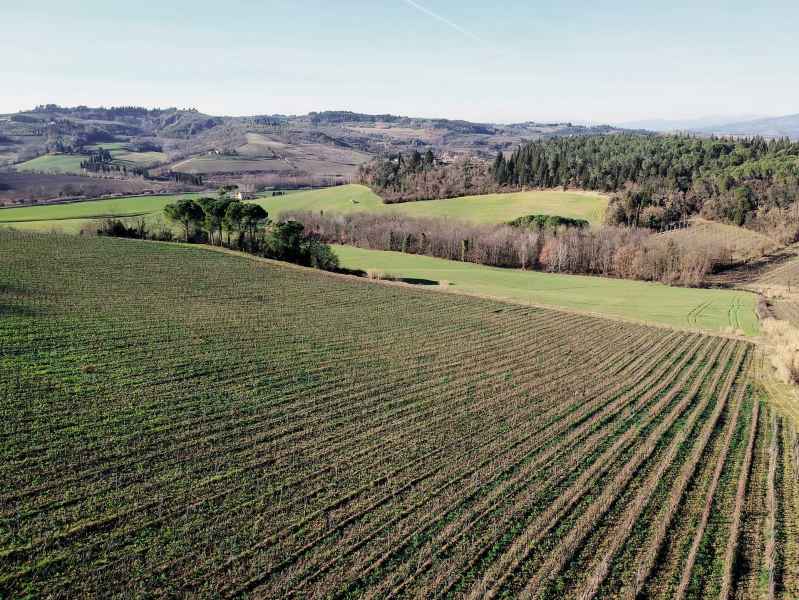 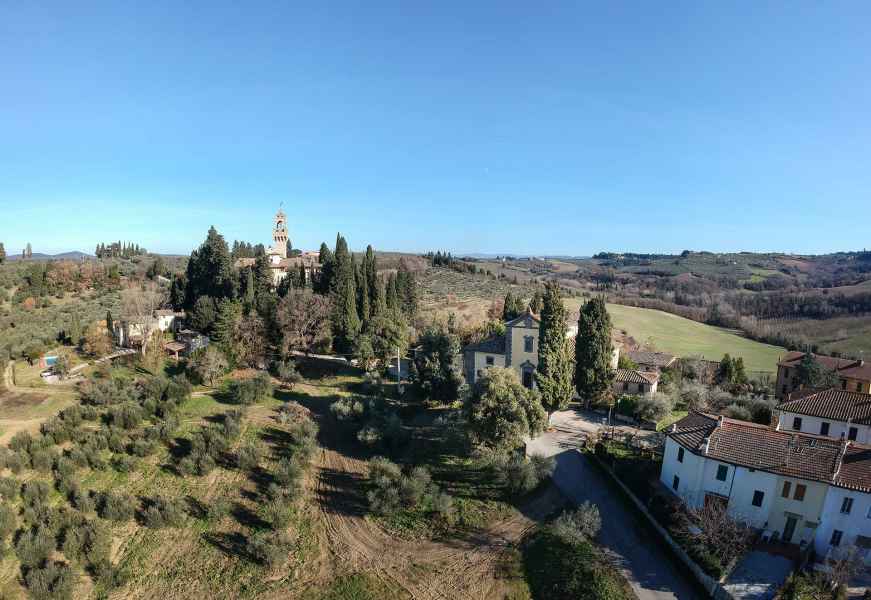 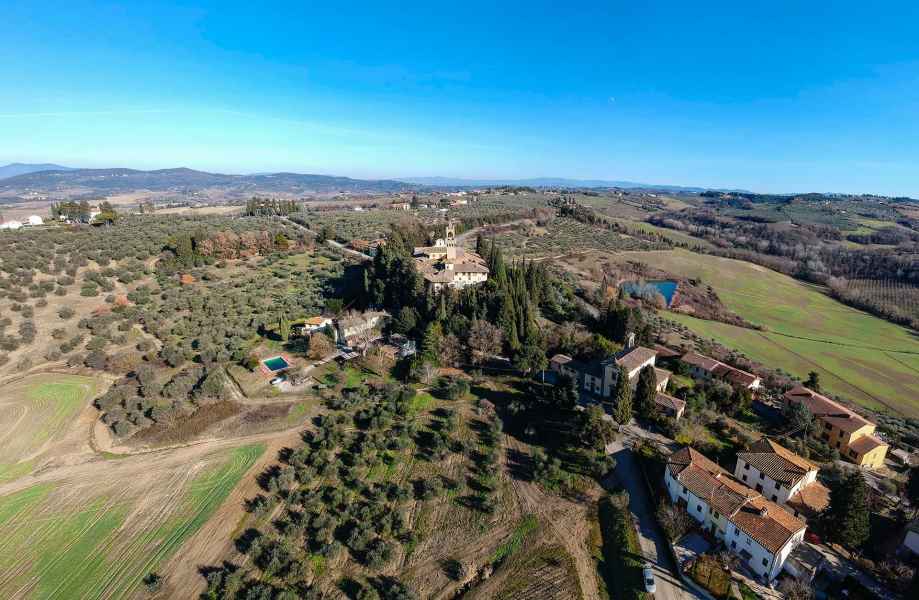 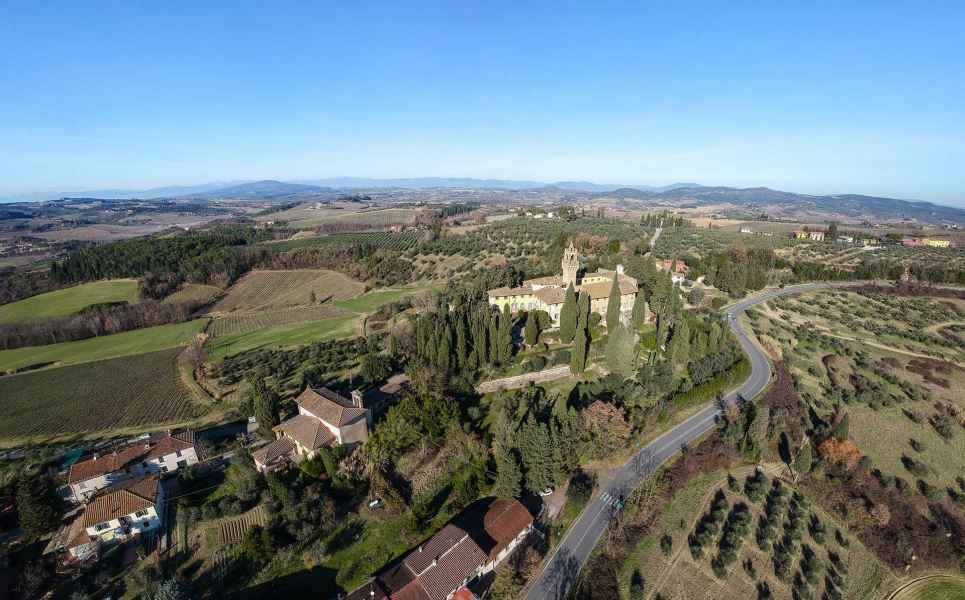 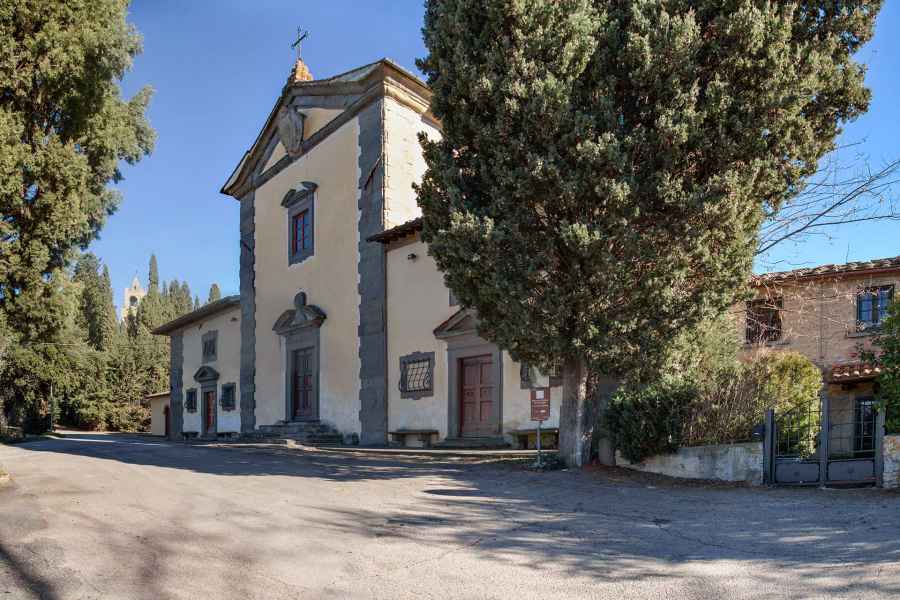