The Arno from Nave a Rovezzano to the Africo torrent

Leonardo indicates the Mulino [mill] of Rovezzano, bought by the Badia Fiorentina from the Albizi family in the 15th century, also known as "Molino Nuovo" or "Molino delle Guazzine" and then as "Mulino del Guasti", still standing on the left bank.

On the right bank, almost illegible (and forgotten in the transcriptions), Leonardo indicates "La Nave" [the boat] upstream of Rovezzano, with the weir, the ferryboat that connected the two banks and the mill called "della Nave". Today the locality of Rovezzano occupies the right bank, while Nave a Rovezzano is on the left bank (this locality developed as a farm named "La Nave").

The Mensola torrent is a right tributary of the Arno that starts from Monte Ceceri and Maiano, and flows below Settignano (in the Ponte a Mensola locality) to enter the Arno between Rovezzano and Varlungo. Leonardo draws it on the hydrographic map of Tuscany (RL 12277 Windsor Castle), studies it in the Codex Leicester (18B-18v: «Concavity made by Mensola, when Arno is low and Mensola big») and mentions it in the Codex Atlanticus (f. 404v) around 1503.

Between the Mensola and Varlungo, Leonardo draws a first sandbank ("renaio", an island that could be submerged in times of high water) between Arno and Bisarno; and indicates its dimensions: «1000 braccia wide and 2000 long» (about 68 hectares).

At the end of the first sandbank, Leonardo draws the first "ancient mill" between Arno and Bisarno, between the right bank (the Varlungo locality) and the left bank (Rusciano).

The name is thought to derive from the ancient Vadum Longum, that is, long ford. The locality, situated on the right bank of the river, was in fact near a ford and on the route from Sant'Andrea a Rovezzano to the Old Mint. The mills of Varlungo are recorded in documents from the 15th and 16th centuries.

This locality is found on the left bank of the Arno, along with the Dominican monastery of Santo Nuovo (today's Istituto Gualandi), at the foot of the hill named "Rucano" or Rusciano, which Leonardo draws and indicates on f. 19r of Madrid Ms. II and mentions in Ms. L: «To remedy the percussion of the Arno at Rusciano and turn it in a gentle bend at Ricorboli and make such a wide riverbank that the fall of its steep bank is above the latter». Here there was a clay deposit, and then a kiln called "La Mattonaia".
There still exists a Via di Rusciano today, and between Via Benedetto Fortini and Via di Ripoli stands the Rusciano Villa.

The mill was located at the beginning of the second sandbank, called Bisarno, between the right bank (Varlungo) and the left bank (Rusciano).

Toward the left bank, between "Rucano" and Ricorboli, Leonardo indicates the Bisarno; he specifies its dimensions: «2100 braccia long and 800 wide», that is, an area of around 57 hectares; and remarks: «here the Arno overflows in times of high water». Leonardo clarifies the nature of the Bisarno on folio 404v of the Codex Atlanticus: «Arno... the riverbed rises and the water does not stay within the banks, but overflows and makes new rivers, the first of which forms the Bisarno, so that cutting it off will provide more land there». In 1644, the Medici planned to establish a hunting reserve on the Bisarno. Today we find here Villa il Casone, the water plant of Anconella (from the name of a stream) and there also exist a Via del Bisarno and a Castello del Bisarno (Villa Beccari, in Via di Badia a Ripoli). In the Anconella Park, the dome over Santa Maria del Fiore has been replicated in scale, interpreting the method used on Brunelleschi's construction site.

On map RL 12679, on the right bank, Leonardo indicates "La Rotta" [rupture, break] twice, citing it the first time as a place name derived from the rupture of the bank between Varlungo and Casaccia ("Chasacce"). On folio 274r of the Codex Arundel, Leonardo sketches this bank with precise annotations: «640 braccia is the broken wall and 150 is the remaining wall with the mill [presumably that of Varlungo]. 300 braccia of the Bisarno has broken in 4 years».

The mill was found between "Casaccia" and the "Bisarno".

Leonardo indicates Casaccia on the right bank, opposite the "Bisarno", just after the third "ancient mill". He also mentions it on two folios in the Codex Arundel (f. 1v: "Reeds of Casacce" and f. 273v: "Casacce" and "the wall of Casacce straightens out at the San Nicolò gate", which however is found on the left bank).
The banks in the area of the ancient Casaccia of Bartolino di Baccio degli Organi, devastated by floods and currents during times of high water, were reinforced several times by imposing walls erected under the Florentine Republic and the Mediean government.
Today there exists a Via della Casaccia, which runs from the right bank of the Arno to Via Aretina.

"Rotta" of the ferryboat

On map RL 12680, Leonardo draws a ferryboat, with no other indications, after the Casacce and upstream of the second "Rotta" (break, rupture). The latter is shown on the right bank, in two parts facing the third sandbank: the first measures «60 bracci» (around 35 metres), the second «100 bracci» (58.3 metres).

It was "700 bracci" wide and 1550 long (for a surface area of around 36 hectares), and stretched beyond the Affrico torrent, opposite Ricorboli.

The locality is correctly indicated by Leonardo on the left bank of the river, where a Via di Ricorboli exists today. It was named for a stream (Rivo Corbuli) that flowed down from the Montici hill (drawn by Leonardo in Madrid Ms. II), toward today's Piazza Ferrucci.

A right tributary of the Arno, it flows down from Monte Ceceri, between Fiesole and Maiano. On f. 211v of the Codex Atlanticus, Leonardo notes: «In Affrico the day of March 5, 1503».

Leonardo indicates the mill on the left bank (along the course of the Bisarno), downstream of Ricorboli. 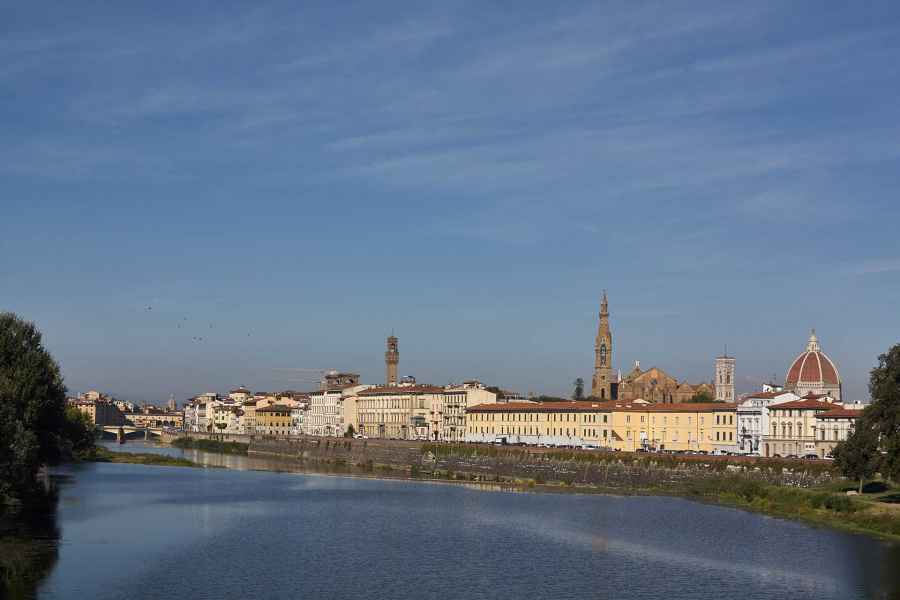 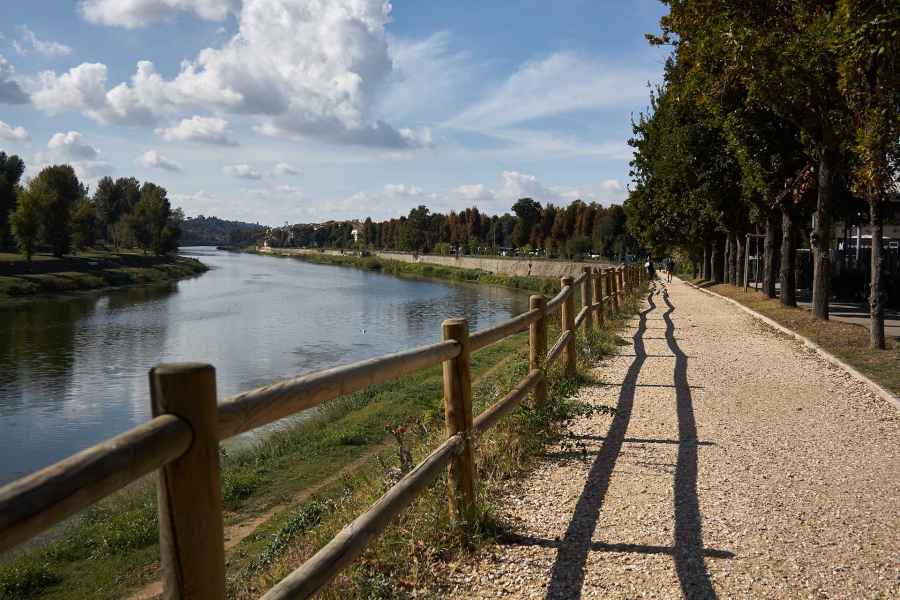 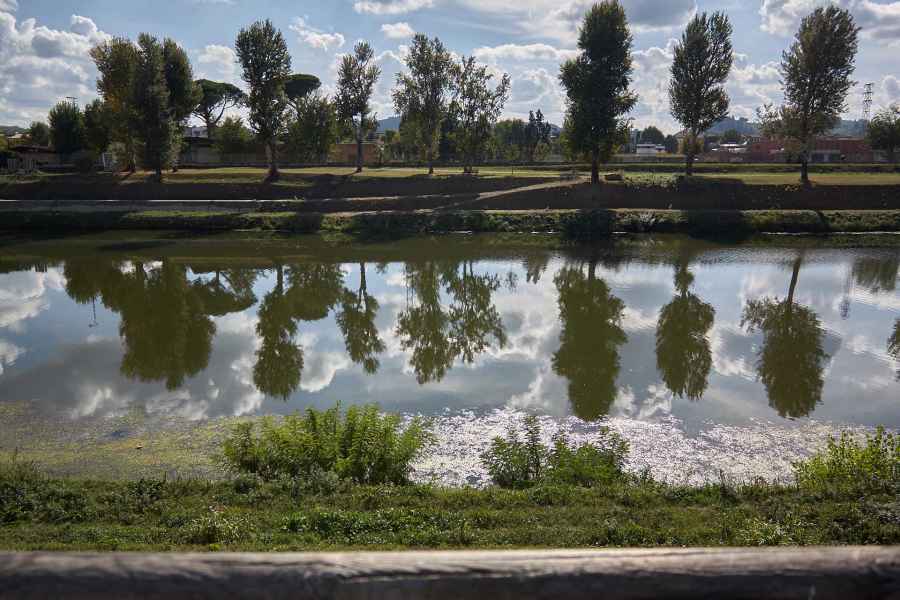 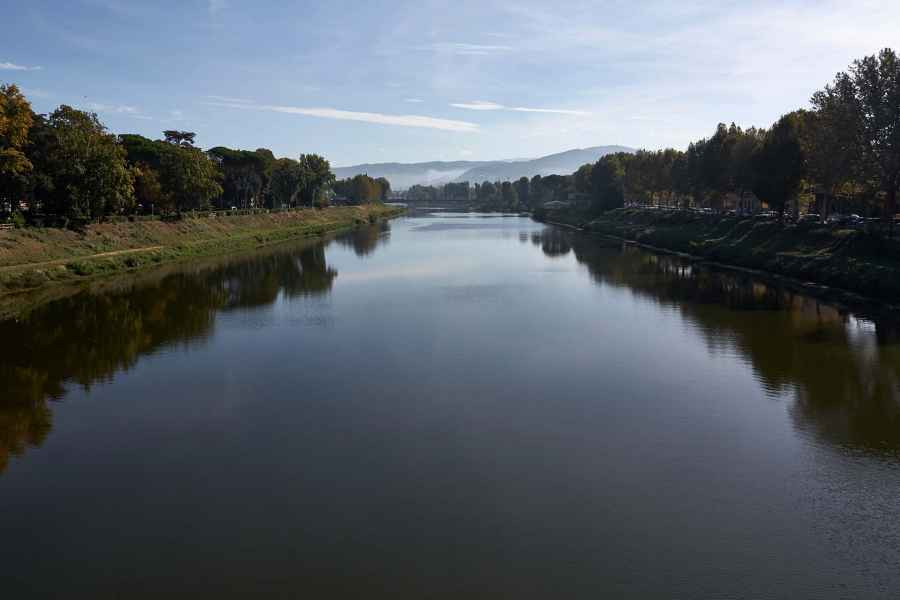 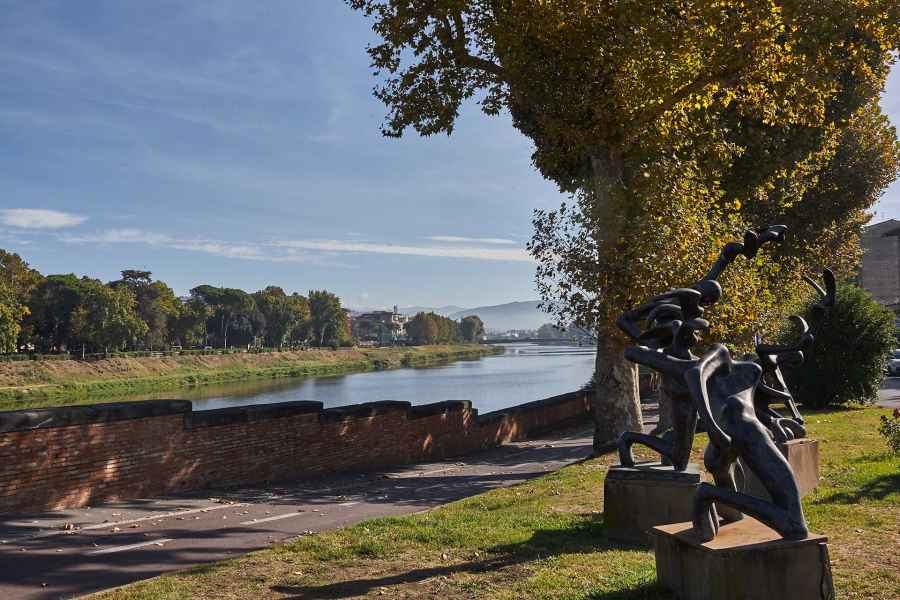 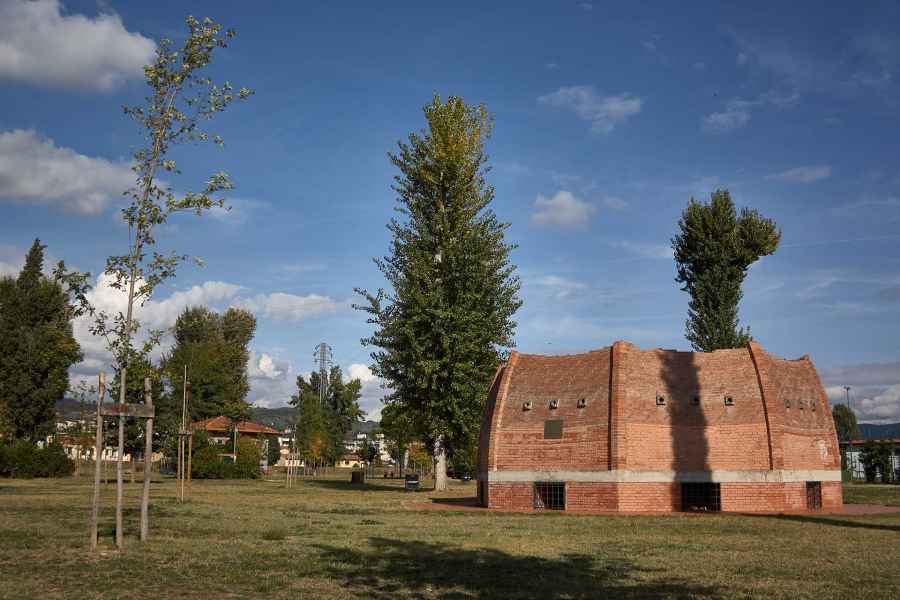 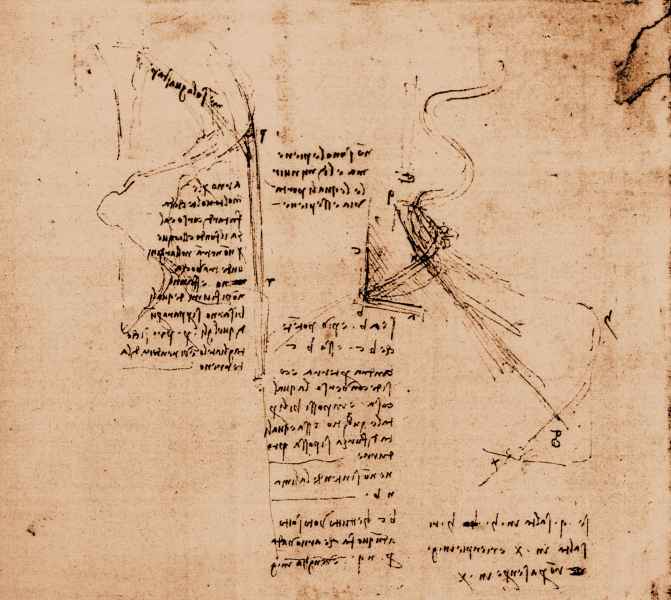 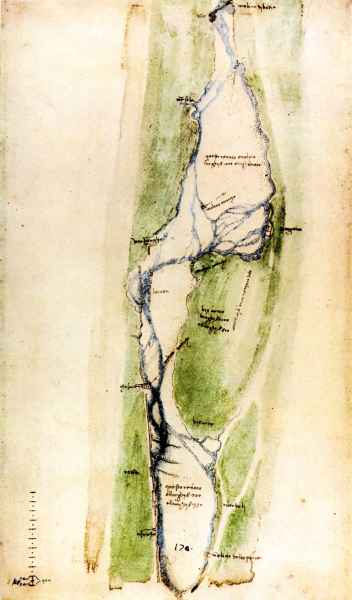 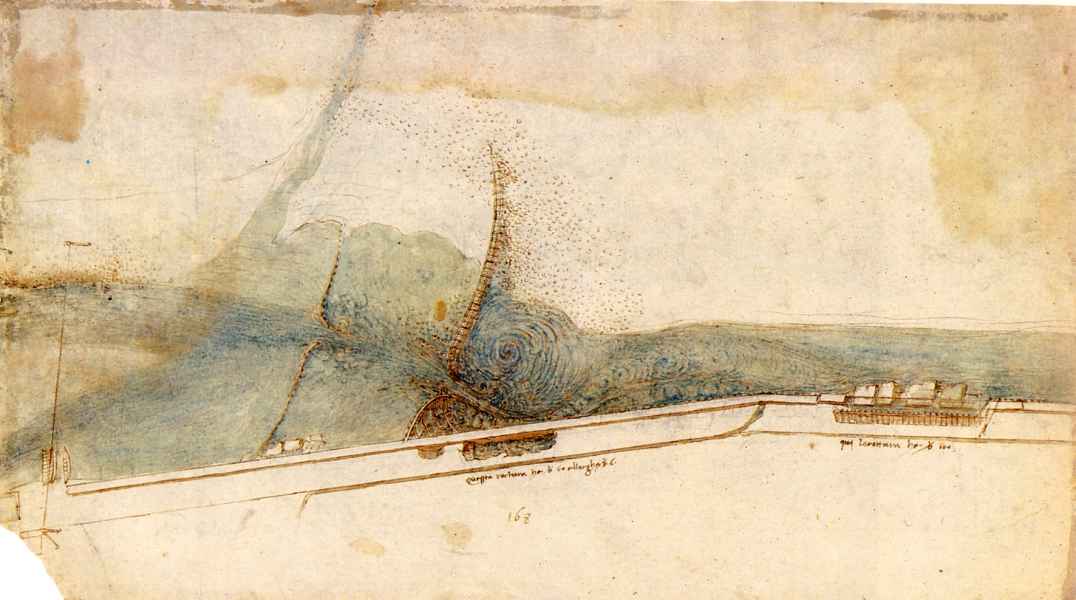 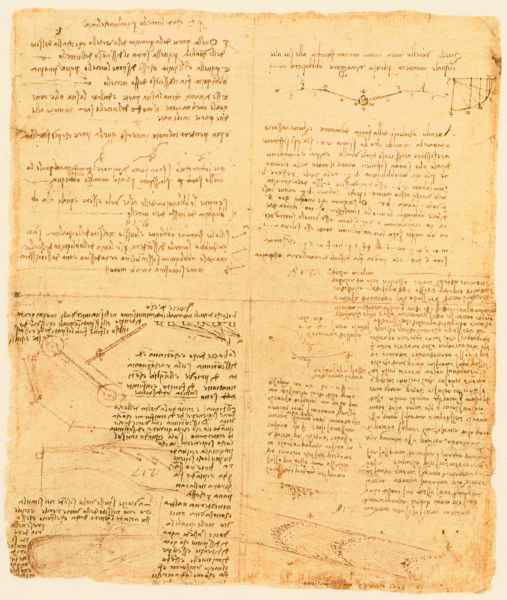 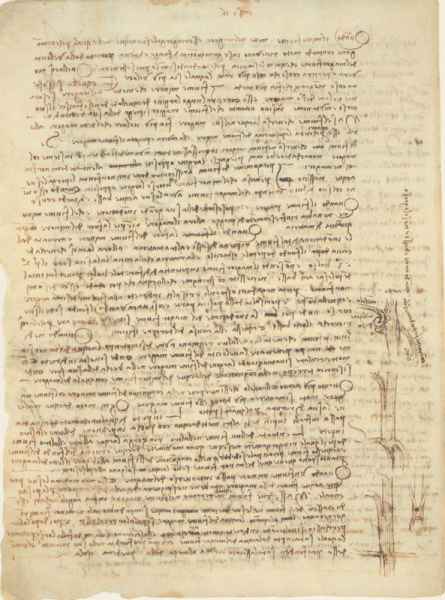 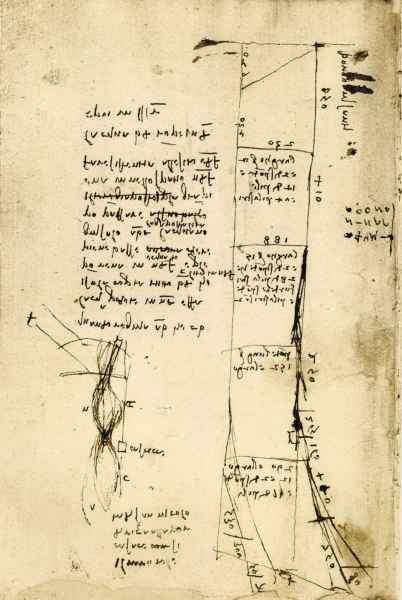 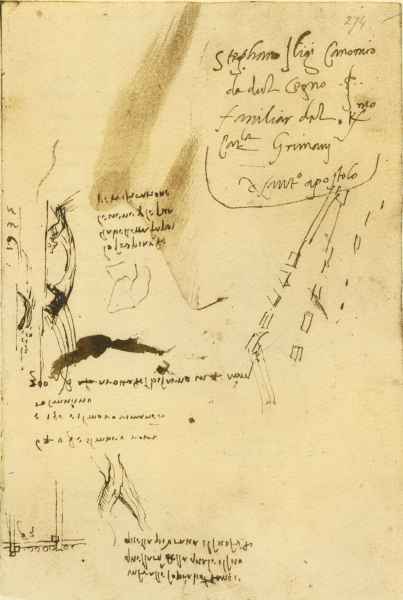 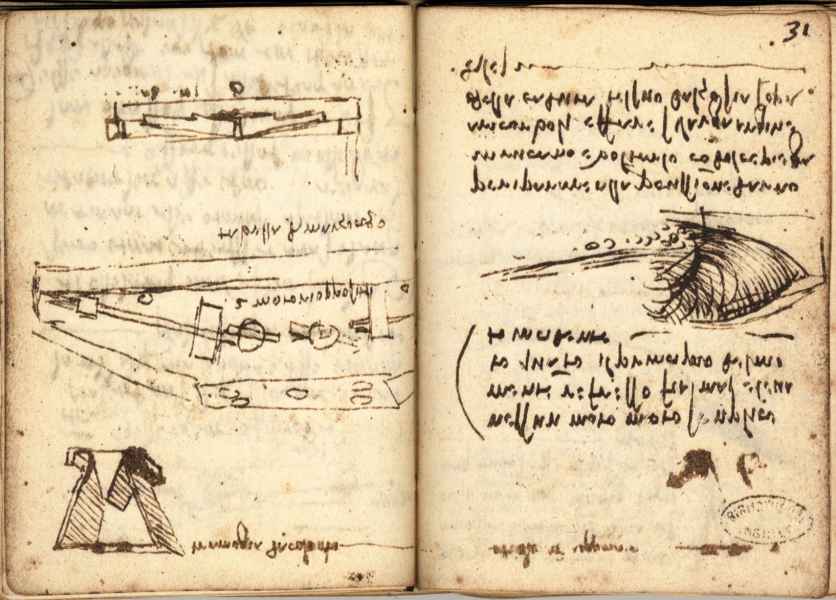 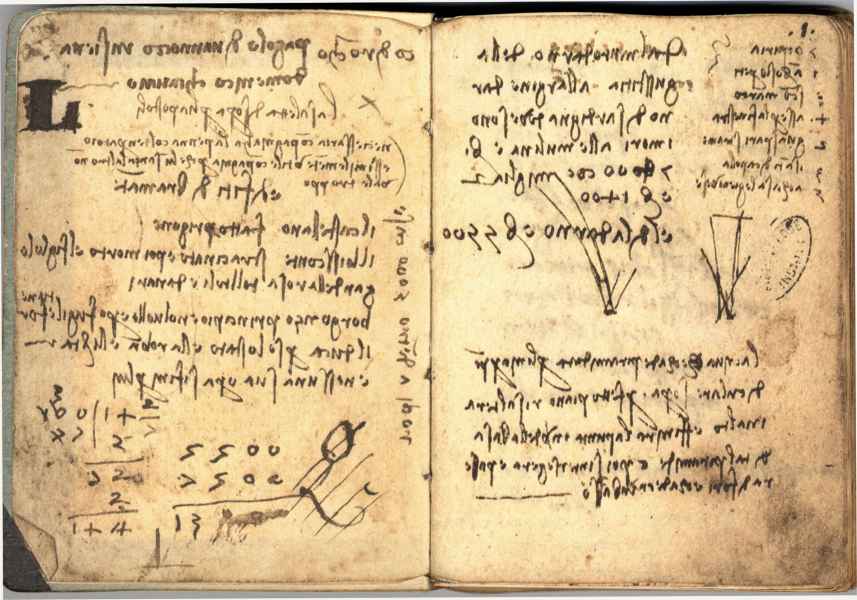