Pisa and the project for the deviation of the river Arno

The maps of the area around Pisa and Livorno confirm that Leonardo not only utilised existing cartography but also conducted reconnaissance and direct observation of the territory: landscapes from nature (of the Monti Pisani in particular), measurement of distances, studies in orientation, and characteristics of the towns, often rendered by stenographic sketches, studies that are unconventional in their references to the hydrographic features of the "Pisa plain".
Obviously, a map such as RLW 12683, with 100 place names, does not result from immediate reconnoitering but is a reassembly of various studies and observations conducted at different times, often with indications simplified as stereotypes; at times instead, interesting details emerge.
In Madrid Ms. II, on folios 52v-53r, the closest study (although having no representations of towns) of the surroundings of Pisa, Leonardo provides important information on the hydrographic nature of the territory before the land reclamation projects carried out by the Medici and Lorraine Grand Dukes from the 16th through the 18th century.
Both the cartography and the representations are more precise and detailed in the cases where Leonardo's engineering and strategic interest was greater, as for example in relation to that deviation of the Arno, a plan conceived to weaken Pisa, on which Leonardo worked in the early years of the 16th century.

The drawing of the project and the beginning of the work

On July 24, 1503, Francesco Guiducci wrote from the "Camp against Pisa" to the "Florentine Balia" to report that on the day before Leonardo Da Vinci, with Alessandro degli Albizi, had described to him and the governor the "design" of the project for deviating the course of the Arno away from Pisa: «After many discussions and doubts it was concluded that the work was highly feasible», because in the worst of cases it would have been useful for defending the hills.
And so, on July 26, the Florence Signoria resolved to reimburse Giovanni Piffero the amount of 56 lire and 13 soldi: «Spent on a 6-horse carriage and living costs for going with Lionando da Vinci to level the Arno at Pisa, and remove it from its bed». The same Giovanni Piffero was, with Leonardo and other artists (including Botticelli, Perugino, Lorenzo della Volpaia, the Della Robbias and the Sangallos), one of the consultants summoned on January 25, 1504 to decide where to place Michelangelo's David. He also collaborated with Leonardo in constructing the mobile scaffolding in Palazzo della Signoria used to paint the Battle of Anghiari in 1505, and is also recalled for having furnished the colours for that great wall painting.
On August 20, 1504, Soderini and Machiavelli managed to announce that work had begun «for deviating the Arno at the tower of Fagiano», for the construction of a dam that would block the flow of the river and bring it away from Pisa through two canals, as far as the Stagno di Livorno, towards the sea (Landucci: «and on August 22, 1504, we set hand to turning the Anno toward Livorno»).
It seems probable that the work of deviating the river toward the Stagno was begun (with "1000 diggers") in the direction indicated in Madrid Ms. II (f. 52v) as "breaking of the Arno", at the last bend in the river before Pisa, just after "Rignone". This locality may possibly be identified as Riglione, where the Florentine militia camped to protect the channel that was being dug, as had already been suggested by the historian Mario Baratta, who however did not have available the map found in 1966 in Ms. 8936 (52v-53r) at the Madrid National Library.

When, after October 26 of that same year, it became obvious that the undertaking had failed, Soderini and Machiavelli were accused of having overrated a «whimsical caprice» (Guicciandini), «a most infelicitous idea that had been fervently promoted by some, strangely enough, against the opinion of more competent persons» (Villani), «but the river laughed at he who tried to govern her» (Muratori).
Undoubtedly, this sharp criticism of the "whimsical caprice" was directed primarily at Leonardo, who by his words had made to seem entirely feasible an undertaking that was instead far from simple, as it turned out. Vasari writes in fact that, «Expressing his ideas through the designs of his hands, he won over with arguments and confounded with reasoning the boldest minds. And every day he made models and designs showing how to excavate and tunnel through mountains with ease in order to pass from one level to the next... and methods for emptying harbours, and pumps for drawing water from great depths; his brain never rested from imagining». On the other hand, the idea of isolating Pisa by deviating the river away from it was strategically brilliant, as has been noted by historians, Baratta among them. And in fact, when the Arno was barred by the galleys of Bardella, a Genoese privateer hired as mercenary to block supplies arriving via riverboat, Pisa found itself in deep trouble. In 1509 the city was defeated only thanks to the blocking of the Arno and the Fiume Morto [dead river] with stakes, an expedient devised by Antonio da Sangallo (Leonardo's companion at Piombino). The correspondence between Machiavelli and the worksite at Pisa, containing a wealth of technical instructions undoubtedly suggested by Leonardo, remains extremely interesting.

The documents and sources mentioned by Repetti in his Dizionario geografico e storico della Toscana are highly interesting, providing a clearer explanation of the objectives of such an ingenious and innovative undertaking: «During this same period the Florentines attempted nothing less than deviating the entire Arno away from Pisa so as to bring greater desolation to its citizens. For this purpose they dug two deep, wide canals near the tower of Fasiano (four miles above the city) into which they intended to let the water of the Arno and from there send it to the sea by way of Coltano and Calambrone. For this purpose they built a great dam resting on the riverbed, where 8000 labourers were already at work, when suddenly there came a flood that knocked down the dam, deluged the works, and forced the Florentines to abandon such a reckless project. Explicit reference to the question of deviating the Arno at Fasiano appears in a letter by the commissary Francesco Guiducci dated July 24, 1503, addressed to the Dieci di Balìa from the camp at Pisa, in which he informs that board of warfare that he has been with Alessandro degli Albizzi, a member of the Dieci di Balìa, with the engineer Leonardo da Vinci and others, including the governor; and that having seen the design, after various discussions it was concluded that the project was highly appropriate, since the Arno could effectively be deviated here, or could remain there in a canal, so that at least it would enable the enemy's hills to be attacked. No less important as regards the history of the last siege of Pisa are the following letters: two of them written by the commissary Antonio Giacomini to the Dieci di Balìa on the dates of June 2 and 3, 1504. In these letters he informed them that Antonio da Sangallo had arrived at the camp against Pisa on that same morning of June 2, and was then sent to Librafratta with the governor to take notes on how this place of Librafratta should be dealt with. After so many failed attempts, the Florentines suspended military operations against Pisa for some time, but continued their political maneuvers, accompanied by offers of gold, to gain the support of the Kings of France and Spain, who were beginning to view the initiative of the Florentines against Pisa as a matter for financial speculation. After about a year, during which the Florentines, having won over to their side the Republics of Genoa and Lucca, they arranged to blockade Pisa through the method used by Gino Capponi, that is, closing off with ships and batteries the mouth of the Arno, the Serchio and the Fiume Morto, and establishing three fortified camps, at S. Piero in Grado for the Arno, at the mouth of the Serchio for the sea, at Mezzana and Ripafratta, on the mountainous side, without forgetting to send other mobile columns to the countryside to guard all of the roads along which supplies might enter the city.
Thus the Pisans, encircled from every side, weakened by long warfare, lacking supplies of any kind and exhausted by starvation, after having courageously and tenaciously endured fourteen and a half years of warfare, felt with extreme grief the approaching of the fatal hour when they would have to accept their destiny and surrender to their most hated enemies. The conditions of capitulation, established on June 4, 1509 in the presence of the Dieci di Balìa and of Niccolò Machiavelli, Secretary of the Republic, were ratified the next day by the Signoria. They consisted of 48 articles, which also provided for returning to the exiled Pisans, none excepted, all their properties and back income; for exemptions applicable to Pisan trade and manufacturing as well as other tax and customs exemptions that had been granted to the Pisani by the Commune of Florence prior to November 9, 1494.
After all this, on June 8, 1509 the army of besiegers peacefully entered Pisa, amidst that taciturn, embittered and exhausted population. »
Texts by
Alessandro Vezzosi, in collaboration with Agnese Sabato / English translation by Lisa Chien
Related resources
Related places
Gallery 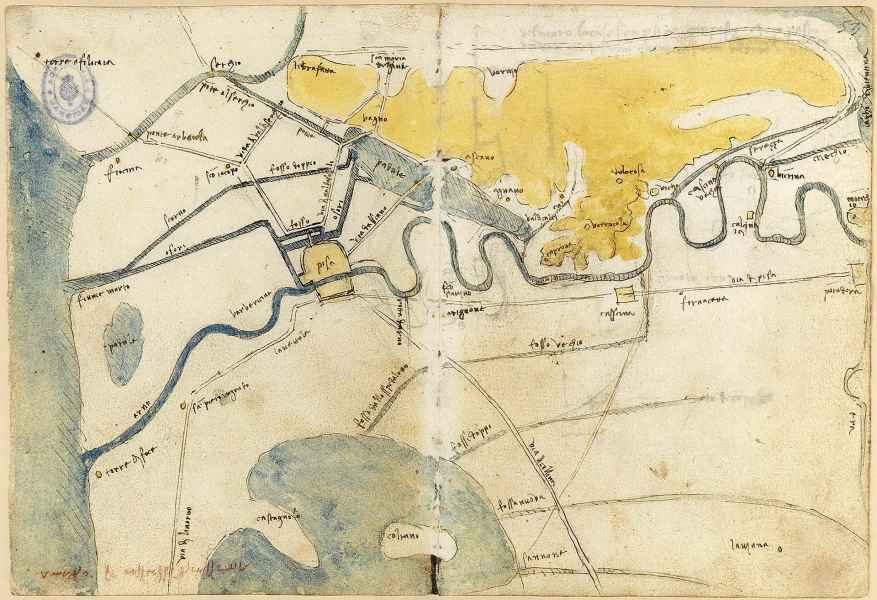